Composer Jean Gilbert (1879-1942) might have been one of the most successful German operetta stars in the pre-WW1 years, he also ran an important operetta empire in the Weimar Republic years. And of course he was the father of Robert Gilbert whose operetta credits are legendary. Gilbert Senior also took the young Frederick Loewe into his household for a while, sending him to school with his son Robert. One of the most famous Jean Gilbert songs is the 1912 hit “Puppchen, du bist mein Augenstern.” It has just been brought back to the Berlin stage in a most unusual version. 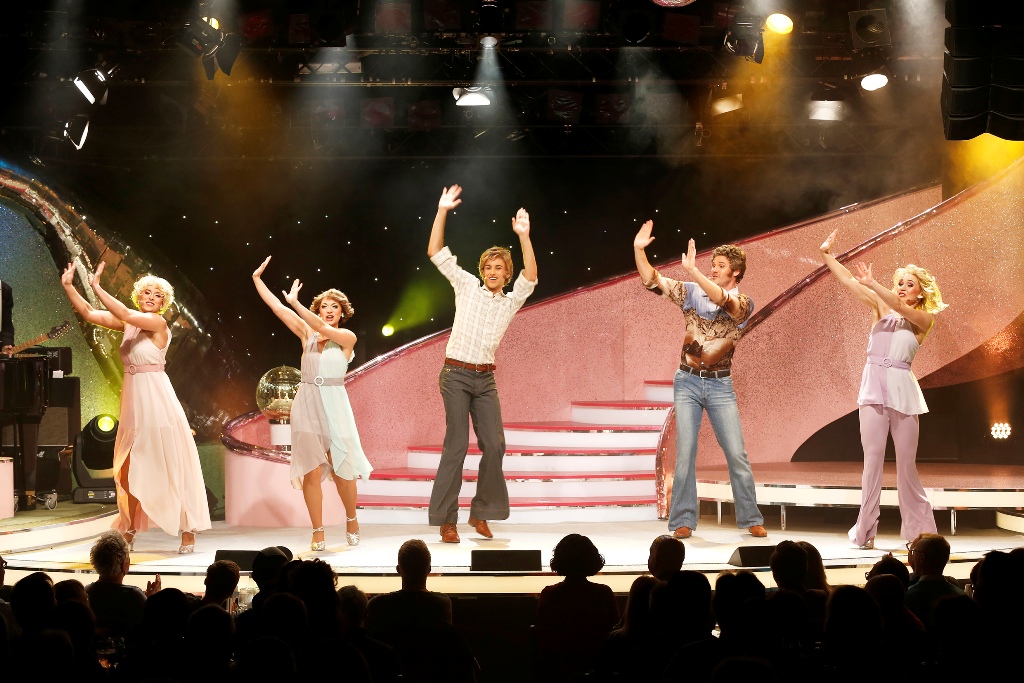 At Tipi am Kanzleramt the two Geschwister Pfister, Ursli and Toni (Christoph Marti and Tobias Bonn), are currently appearing in a glitzy 1970s revival revue called So, als ob du schwebtest. It recreates the famous TV appearances of the Schlager duo Cindy & Bert who rose to national fame in Germany as a happy and carefree couple singing happy and carefree songs such as “Immer wieder sonntags.” 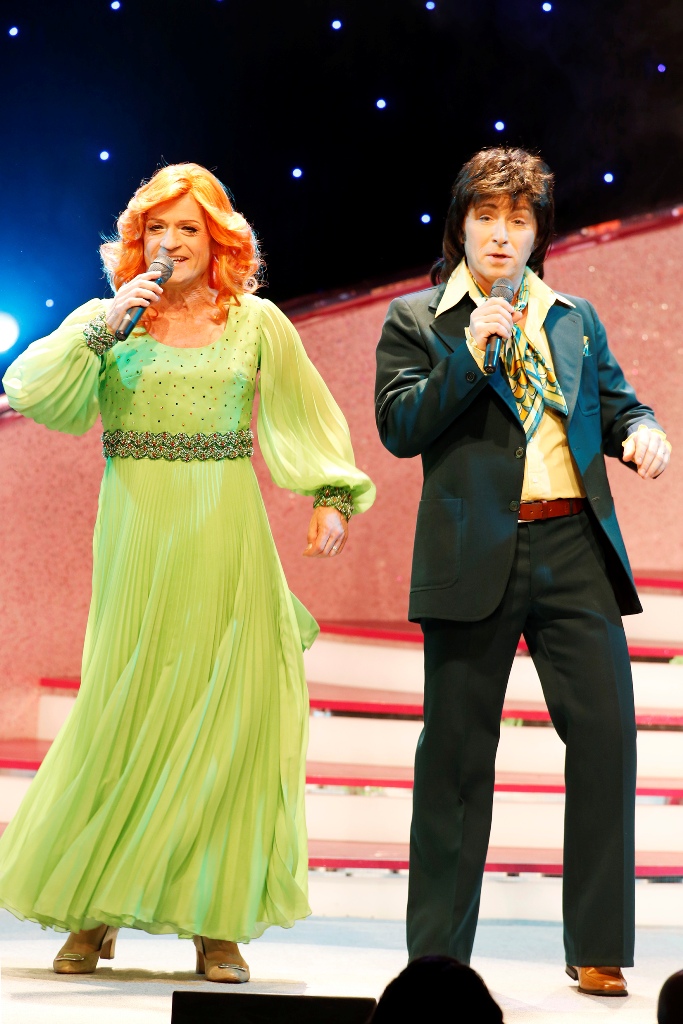 In this show, the two stars have included a chorus of five who do not only function as (hilariously funny) background singers but who also present “advertisement” in between numbers. One of these breaks is a 1970s version of a 1920s Charleston, as re-imagined in 2019. It’s a jingle called “Nuts hat’s” (English: Nuts has it). This song is an absolute showstopper, in the original 1970s version, as well as in the way it’s included in the Cindy & Bert show now.

What is astonishing is the fact that this is not a 1920s Charleston seen through the lense of the Seventies. No, the tune is actually the refrain from Jean Gilbert’s “Puppchen.”

Witnessing the metamorphosis of this song from 1912 to the 1970s and then today is amazing. And the fact that the tune has not lost its magic is even more astonishing. An operetta miracle?

Of course, Christoph Marti and Tobias Bonn have already demonstrated their passion for operetta in many productions, from Im weißen Rössl, to Clivia, Roxy und ihr Wunderteam, and Ball im Savoy (to name just a few). So far they have not had a go at anything by Jean Gilbert – his Keusche Susanne, his Kinokönigin, or Die Frau im Hermelin. Many of them saw successful productions in London and New York, among the Broadway credits there is Modest Suzanne (1912), The Queen of the Movies (1914), A Modern Eve (1915 and 1923), Katja (1927), and Marching By (1932). 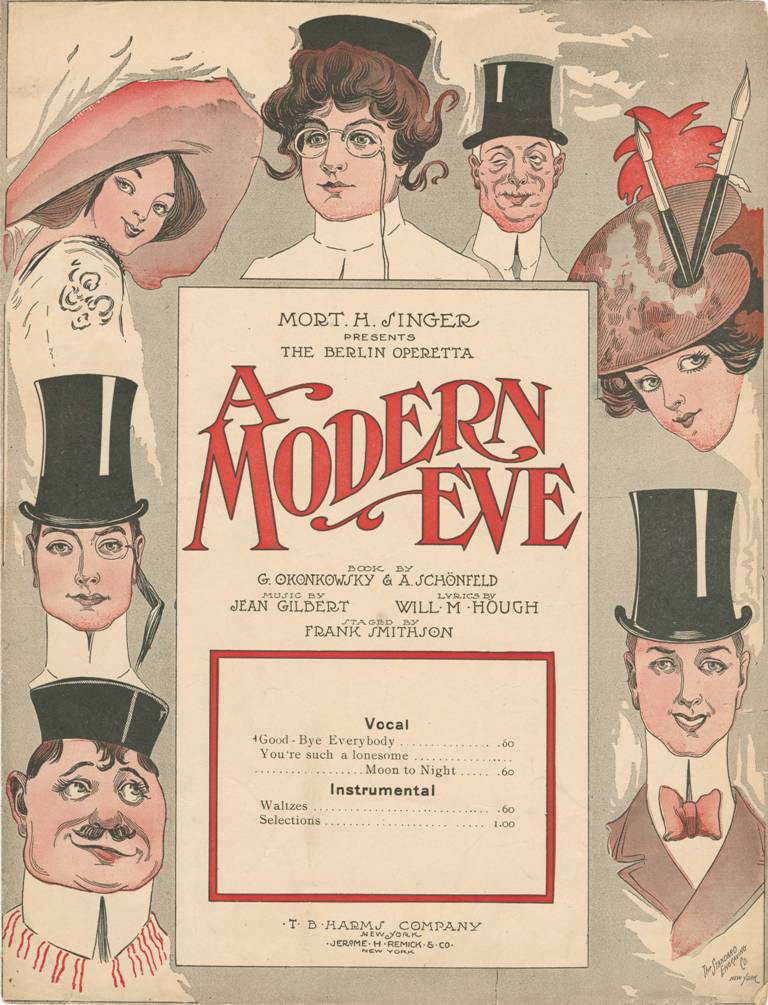 Sheet music cover for Robert Gilbert’s “A Modern Eve,” as seen on Broadway as a “Berlin Operetta.”

Jean Gilbert had to flee from the Nazis, like his son Robert. While Gilbert Jr. went to New York and experienced Broadway productions first hand that paved the way for his later career as translator of hits such as My Fair Lady and Cabaret, Gilbert Senior ended up in South America. He died in Buenos Aires without ever seeing his son again. 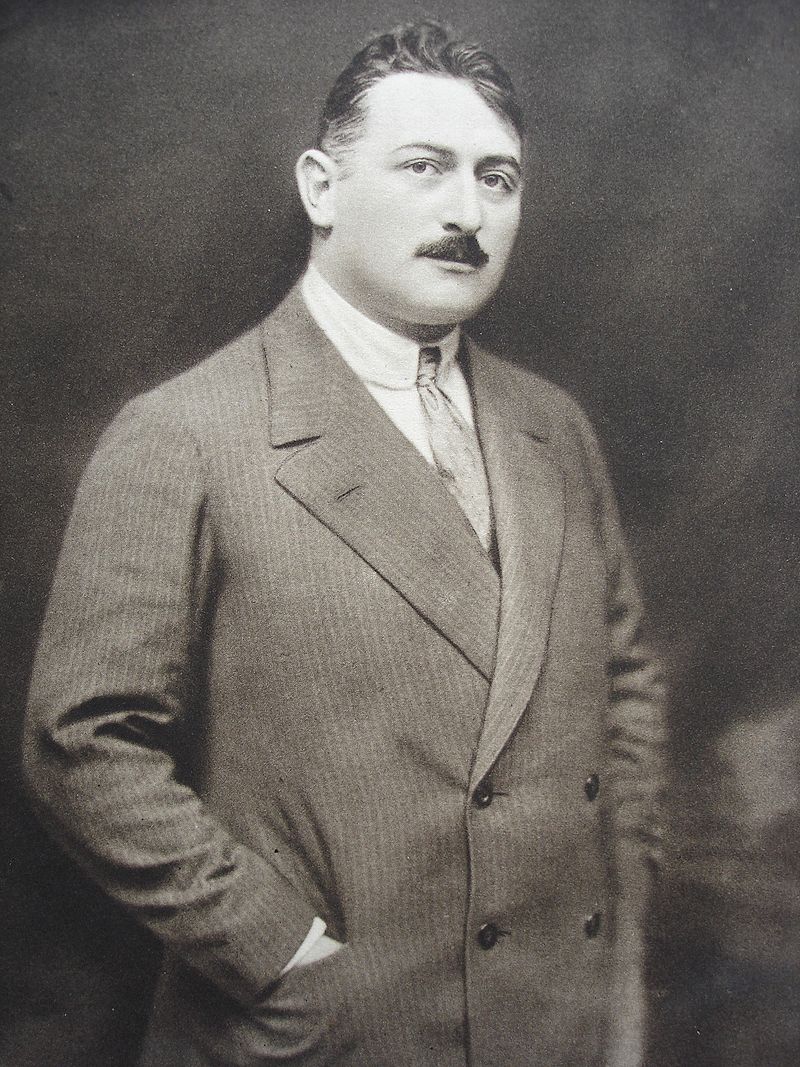 Wouldn’t it be high time for a revival, one that goes beyond “Nuts hat’s”? That said, if you haven’t seen So, als ob du schwebtest you should definitely go, because it’s a pure joy, running until early January 2020: stunning costumes, stunning sets, stunning performances by Marti/Bonn, and a stunning background chorus that gets a chance to shine in the foreground too, every now and again. Johannes Roloff conducts his band and created the dazzling arrangements.

By the way, some of the Modern Eve music is included in Musicals Lost and Found, an album released by the Operetta Foundation in Los Angeles.