Operettas can be spectacular – a point proven by grand masters such as Offenbach in 19th century Paris and Erik Charell in 2oth century Berlin. Now, the Domstufenfestspiele Erfurt will present a musicalized version of the medieval morality play Jedermann/Everyman, re-written by Peter Lund and newly composed by Wolfgang Böhmer, as a “Rock Opera.” 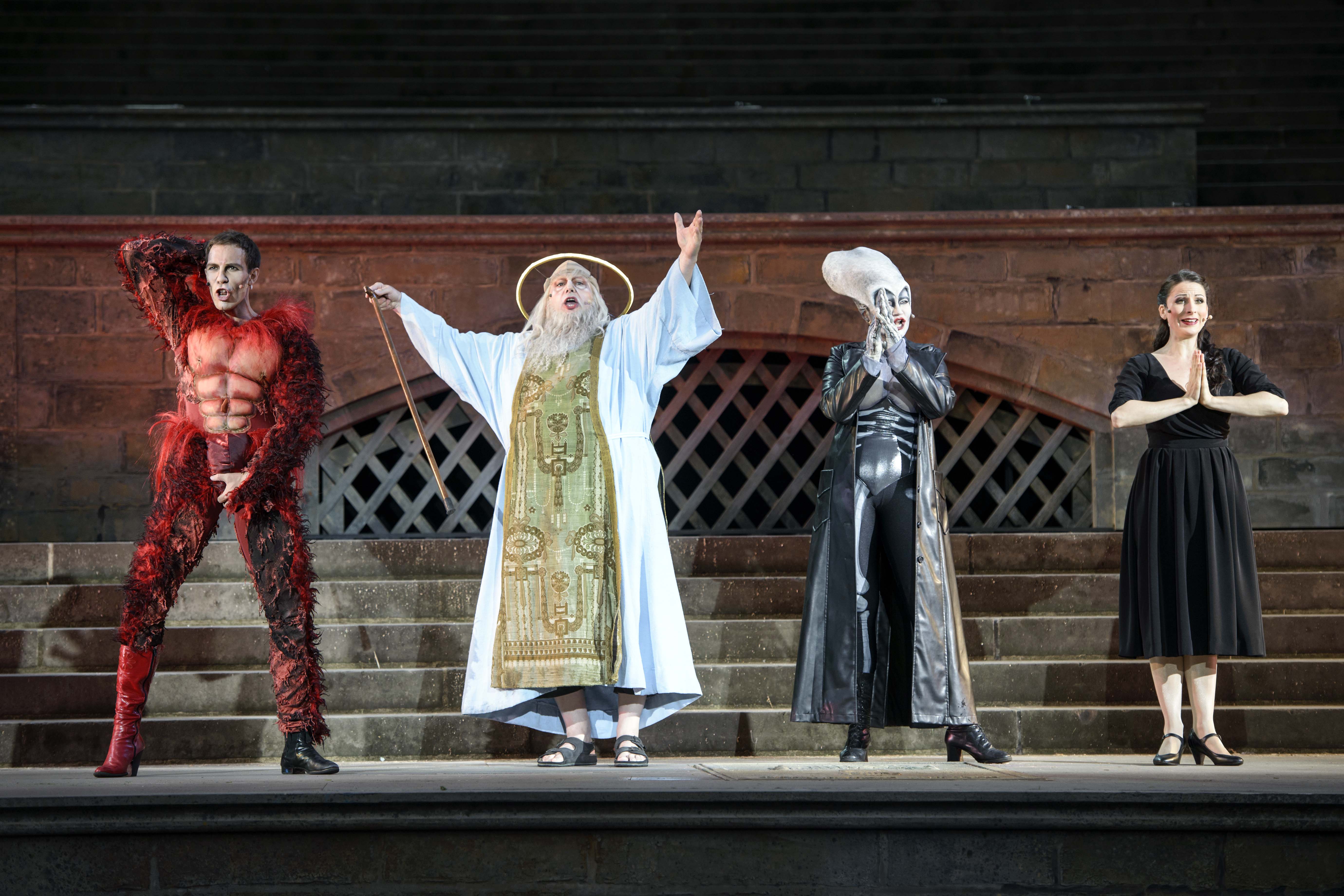 You may rightly ask what is a “Rock Opera” doing on a site devoted to operetta? Well, let’s put it this way: Peter Lund has directed some of the greatest operetta productions I have ever seen, the list is long and ranges from Blume von Hawaii to Messeschlager Gisela to the revue Ein Herz sucht einen Parkplatz with post-1945 operettas by Kalman, Schröder & Co. He has also adapted my operettas, adaptations that have later been performed at houses such as the Volksoper Wien. Plus, Professor Lund, the teacher, forces his musical comedy students at the UdK Berlin regularly to perform operetta to learn about this beloved art form. (Beloved by him.) Composer Wolfgang Böhmer, on the other hand, has devoted a lot of personal energy to creating a new German translation of many Offenbach titles for the Offenbach Edition Keck (OEK), under the supervision of publishing house Boosey & Hawkes.

So, if two such renowned operetta people get together to create a new Jedermann on the steps of the Dom in Erfurt, in the German province of Thuringia, we listen up.

From what can already be heard, the music sounds like a homage to the raunchy Roaring Twenties, as familiar via the score of Cabaret. “Mammons Tanz“ – a kind of devilish Goldfinger dance – sounds suspiciously like the famous „Money, Money, Money“ song by Kander & Ebb. And the “Saloon” arrangement certainly evokes the dirty world of 1920s operetta. Mixed with a healthy dose of contemporary German musical comedy style, noticeable in the strong emphasis on the percussion section.

There are many operettas from the Twenties that include similarly styled songs, which – however – are rarely performed like this today, because standard operetta singers cannot sing and dance like old-style operetta performers, or musical comedy guys and gals. 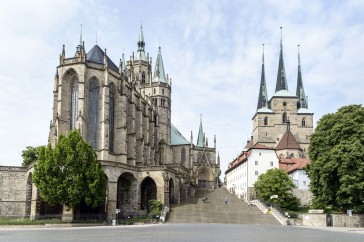 In this sense, it’s interesting to see how these performers in Erfurt, under the direction of Peter Lund himself, will handle the material. In direct comparison to the equally grand operetta stages in, let’s say, Mörbisch, these actors move around with more expansive personalities. Which is great to watch, and might even catch the attention of the Mörbisch casting director?

Why the authors call their new Jedermann a “Rock Opera” remains their secret. As you will know, the genre “Rock Opera” had its shining moment in the 1970s, and really sounded and (!) looked very different to the sci-fi costumed staging of Jedermann in Erfurt. But maybe the marketing people in Thuringia thought the label “Rock Opera” sells better than “A Musical,” or God forbid: “An Operetta Spectacle.”

The production, starring Andreas Lichtenberger as Jedermann, premieres tonight and runs until Sunday, July 27. Part of the cast are Peter Lund’s musical comedy students from Berlin, who have all sung their fair share of operetta as part of their education. It would be great to see them in a real grand operetta – à la Casanova, Drei Musketiere, Zirkusprinzessin, Herzogin von Chicago, Roxy und ihr Wunderteam – sometime. Till that happens, it should be a joy seeing them in Jedermann. Whether you want to call it a “Rock Opera” or not, it’s sure to rock Erfurt.