Three cheers to the Musikalische Komödie Leipzig! They have just taken Gerd Natschinski’s famous DDR operetta Mein Freund Bunbury back into their repertoire, after an absence of three years. So you can experience the musical Oscar Wilde adaptation of The Importance of Being Earnest anew and live.

A scene from the Leipzig production of “Mein Freund Bunbury”. (Photo: Musikalische Komödie)

The show is often hailed as “the first musical comedy” of the DDR. But actually, the Socialists did not want to differentiate between musical and operetta. Instead, they spoke of “Musikalisches Unterhaltungstheater,” and Bunbury was one of the most successful titles the former East Germany brought forth in this context.

You can see the show, set in London 1925, as a direct answer to My Fair Lady. To play that show – which premiered in West-Berlin’s Theater des Westens in 1961, the year the wall was built – cost theatres in the eastern part of the country a lot of money. Which they paid, grudgingly, due to popular demand. Still, they were on the look-out for a cheaper alternative. Natschinski’s Bunbury, which premiered in 1964 at the Metropol Theater East-Berlin, was a perfect substitute: it also played in England, the original Oscar Wilde story was even updated to more or less equal My Fair Lady, time wise. Both stories deal with the British class system, present some eccentric characters, and a certain “nostalgia” feeling. 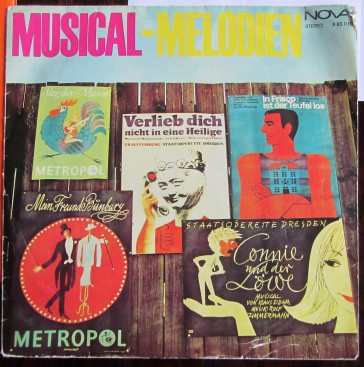 The music Natschinksi wrote is not particularly nostalgic, on the other hand, which was probably part of its success. It demonstates a certain swing feeling that audiences loved, in 1964 and after the fall of the wall. Bunbury is the only operetta from the former DDR that has popped up regularly in theaters in the “Neue Bundesländer” after 1989. Possibly, because the show is not obviously “political” or “socialist”, like other titles from the “Musikalisches Unterhaltungstheater” canon.

The Musikalische Komödie Leipzig has now re-introduced their production by Karl Zugowski, one year before they will also present that other great DDR hit anew, In Frisco ist der Teufel los by Guido Masanetz. Considering that the Staatsoperette Dresden as the alternative former DDR theater devoted to operetta is completely avoiding this particular “national heritage,” it’s nice to see the shows re-staged in Leipzig at least. Though, what would really be interesting is seeing them presented for a younger and non-Eastern audience.

By the way, if you want to hear more Natschinski this summer, there is a production of his other hit, Messeschlager Gisela, playing at the Rüdersdorfer Sommeroperette on July 19 and 29. It’s much more infused with politics, I personally think that also makes Gisela more interesting and more worthwhile to revisit. It also passed the test of time when Peter Lund presented it in a great and convincing staging at the Neuköllner Oper, for young audiences in West-Berlin.