You don’t know where Neustrelitz is? Then you have obviously never been on holiday in Mecklenburg-Vorpommern, the magical region north of Berlin. It’s full of lakes and lush landscapes. The historic town of Neustrelitz is situated on the shore of the Zierker See. From 1738 until 1918 it was the capital of the duchy of Mecklenburg-Strelitz. So, obviously, there is a castle and a park. Since 2001 this baroque garden is used, in the summer, as a festival location. And that festival is dedicated to operetta. This year, Lehár’s Graf von Luxemburg is on offer. 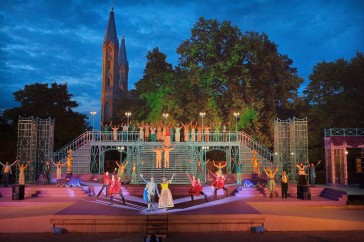 I went to Neustrelitz in 2008 and loved the vista – that lake spreading out before you, boats everywhere, and small houses on the shore. The park where the festival is held is grand too, perhaps a little too grand. Because, due to the size, the Frau Luna I saw had to be staged like a massive spectacle, not an intimate “Kammerspiel.” Yes, Frau Luna can take the grand treatment, probably much more than Graf von Luxemburg.

What surprised me, in 2008, was that the old Metropol-Theater aesthetic of the former DDR was so alive and kicking in Neustrelitz. It was a bizarre experience, like time travelling. Many of the Metropol stars were on stage for Frau Luna, too, and they were cheered by their loyal fans.

If you were not a loyal fan, the blindingly neon-colored costumes – for the inhabitants of the moon and beyond – were a bit of a challenge. As was the orchestra sound, and the very unspectacular choreography. 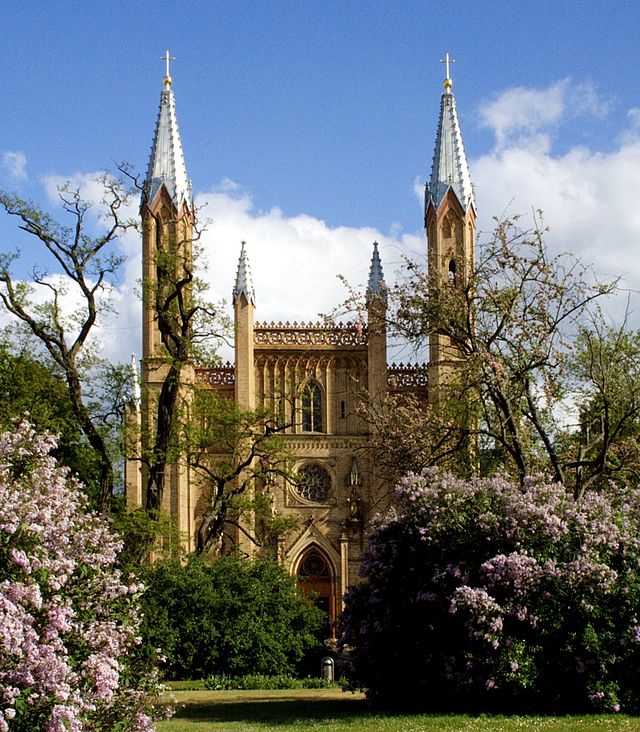 The majestic church on the castle grounds.

This year, Wolfgang Lachnitti s is once more in charge of the staging. Jörg Pitschmann conducts the Neubrandenburger Philharmonie. It remains to be seen whether the Lehár will turn out just like all other operettas before, i.e. very “traditional.” Or whether there’s a glimpse of funkiness in 2014.

If you like your operettas to look as retro as possible, and if you want to experience the fabled Metropol Theater atmosphere, then of course the Festspiele im Schlossgarten Neustrelitz are perfect you for. They are, for the moment, also the only real “operetta festival” in Germany. It’s not till the end of January 2015 that the Komische Oper Berlin will start their own festival, and possibly point the way in a new direction.