Leon Jessel’s 1917 operetta Das Schwarzwaldmädel was one of the great WW1 hits coming from Berlin, because it transported war-weary theatre goers to a carefree and beautiful part of Southern Germany where the world seemed to be in order, before the final collapse of the Prussian empire in 1918/19. Later, the show was revived again and again in times of trouble. It’s not surprising that right after WW2 Das Schwarzwaldmädel was once more the show traumatized Germans flocked to see – especially in the super successful 1950 film version starring Sonja Ziemann. It became the original “Heimatfilm” and that all further movies were modeled on, including various versions of the White Horse Inn, and even Die Csardasfürstin (moved from Hungary to an orange grove in Sicily). In recent years, Jessel’s tuneful show was somewhat forgotten, because many younger theater and stage directors were afraid of the “folkloristic” elements in the show, and could not see the typically operetta parody moments the piece offers. This week, the Engelsaal in Hamburg presented a new production, offering a chance for a live encounter with Schwarzwaldmädel. 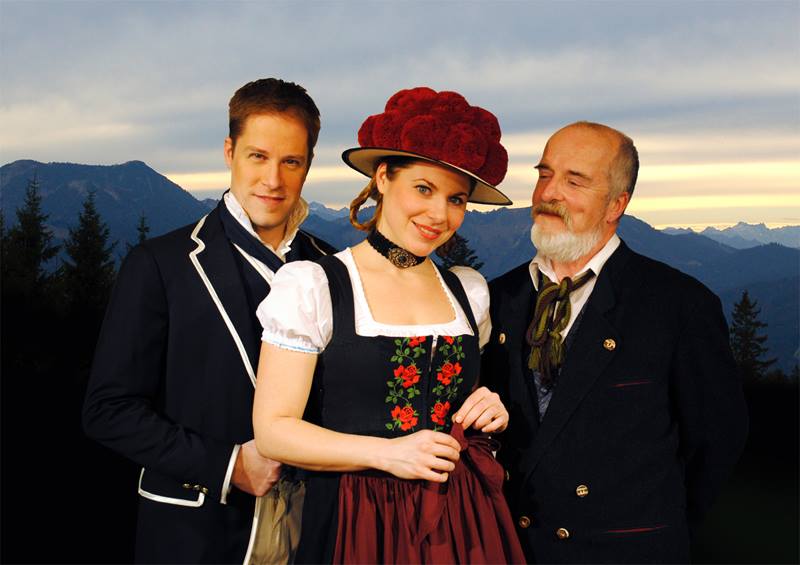 The poster for the 2016 production of “Schwarzwaldmädel.” (Photo: Engelsaal, Hamburg)

This theater venue, run by Karl-Heinz Wellerdiek, has been called “an oasis in the midst of the rapid changes of our times” by the German newspaper FAZ (“Eine Oase in der Schnelllebigkeit unserer Zeit”). The shows presented there are consciously “old fashioned,” so one should not expect a novel approach to this Jessel show. Nor one that brings out the irony that is woven into the libretto: the story of various big city characters from Berlin roaming around in a backwards village in the Black Forrest, experiencing the joys of country life, while bringing novel ideas to the villagers, most notably the title character Bärbele. As a simple house maid she experiences something of a coming-out when she falls in love with one of the men from the metropolis, and eventually leaves the country side to start a new and liberated life elsewhere.

German audiences going to see the 1950 movie version of “Schwarzwaldmädel,” while the country still lies in ruins.

Yet, even if the Engelsaal presents operetta in a old-fashioned way, it’s still a rare opportunity to experience the stage version of Schwarzwaldmädel rather than just the film. It’s also an opportunity to hear some young (and new) operetta talent such as Philip Lüsebrink, who can be seen on the poster.

The production premiered this week in Hamburg. Interestingly, there are no online reviews of this enterprise. There is also no full cast on the website of the company. What you go get are the performance dates: Schwarzwaldmädel can be seen at regular intervals all through to May 2016.

Anyone interested in Jessel and his fascinating life – as an outspoken Nazi supporter of Jewish origin, who was killed by the Nazis, while some of their top officials considered Schwarzwaldmädel the perfect Aryan operetta and kept it in repertoire until the late 1930s – should read Albrecht Dümling’s biography Verweigerte Heimat, which was just reprinted.

Reading Dümling’s narrative, it becomes clear that there is more to discover about this show. So hopefully this production in Engelsaal will be the start of a larger scale revival.

By the way, there is also a silent movie version from 1920 and a “talkie” from 1933. Both are worth watching if you can get hold of them. They have both not been released commercially on DVD, sadly.

For more information on the Hamburg performances, click here.