So here it is, the Emmerich Kálmán gala from Dresden’s Semperoper on CD. Christian Thielemann is conducting the forces of the Staatskapelle Dresden, and his two soloists are Polish tenor Piotr Beczala and last-minute stand-in Ingeborg Schöpf from the rural Staatsoperette Dresden (she replaced Diana Damrau who fell sick on the day of the performance). 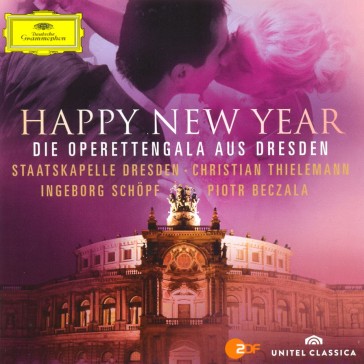 Anyone who saw the live TV-transmission of this concert on New Year’s Eve will remember that the soloists looked very attractive in a retro kind of way, in fact, the whole show had a definitive retro-touch bringing to mind the (in)famous Seventies operetta shows on German TV with Anneliese Rothenberger and Ingeborg Hallstein. Any fan of that sort of operetta – and that sort of operetta singing – will love this new CD. Beczala with his elegant slim tenor sounds a bit like a new born Fritz Wunderlich though he’s not as emotionally gripping as the famous Sixties predecessor (yet). Schöpf looked better on screen than she sounds on CD, her voice is a bit anonymous and shrill at the top, her delivery of the songs on the dull side of things.

But again, if you like Seventies operetta, you will probably enjoy the two soloists and you won’t mind their very passive treatment of the song lyrics.

Conductor Christian Thielemann devoted the 2012/13 gala entirely to Kálmán, after two Lehár galas in the years before (the last one is included as a bonus DVD) I personally find his conducting of operetta and Kálmán in particular a bit too broad and languid to be exiting; also the sound on CD is slightly blurred so that sensual details often get lost. In addition, the most sensual number Thielemann did conduct, the intermezzo from Die Bajadere, is cut from the CD. No idea why. (Instead, the Robert Stolz song “Ob blond, ob braun, ich liebe alle Frau’n” is included.)

Anyone who wants a modern digital version of these standard hits and some rarities – such as “Carrambolina, Carramboletta” from Veilchen vom Montmartre and “Mein Traum, mein Traum” from Kaiserin Josphine (not couting “Ein kleiner Solowfox mit Mary” from the jazzy Herzogin von Chicago) – will want to have this CD. True aficionados of retro-operetta might prefer to stick to their recordings of Csardasfürstin and Gräfin Mariza with Schock/Schramm and Robert Stolz conducting. Maestro Stolz, in direct comparison with Thielemann, demonstrates a far securer grip of this repertoire and is more convincing all round. And when it comes to “Grüß mir mein Wien” … no one beats Fritz Wunderlich singing that. Sorry, Piotr!

By the way, Beczala will issue another CD with operetta music in May 2013, a disc devoted to Richard Tauber (he does pick his heroes from the very top shelf, doesn’t he?) It will also be released by Deutsche Grammophon. Title: Dein ist mein ganzes Herz (surprise, surprise). It also features Anna Netrebko, Daniela Fally, Avi Avital and the Berlin Comedian Harmonists. Lukasz Borowicz conducts the Royal Philharmonic Orchestra.