Kálmán’s 1920 Viennese hit Das Hollandweibchen is a special work that marks a turning point in the composer’s long career. It’s his last show written with Leo Stein and Béla Jenbach (who also created Csardasfürstin in 1915). Kálmán turned to the new team Brammer/Grünwald directly afterwards and went on to write the jazzed-up Bajadere (1921), Gräfin Mariza (1924), Zirkusprinzessin (1926) and Herzogin von Chicago (1928) with them: perfect examples of Roaring Twenties operettas filled with foxtrots, charlestons, shimmies. Hollandweibchen is, in contrast, an almost old-fashioned work: a swansong to the pre-Word War 1 aristocratic system of princes who don’t want to marry princesses selected for them by their parents, a plot-pattern perfectly captured in Ein Walzertraum (1907) and recycled here. Now, Hollandweibchen has been released on DVD for the first time, based on a live performance from the Ohio Light Opera filmed in 2016. 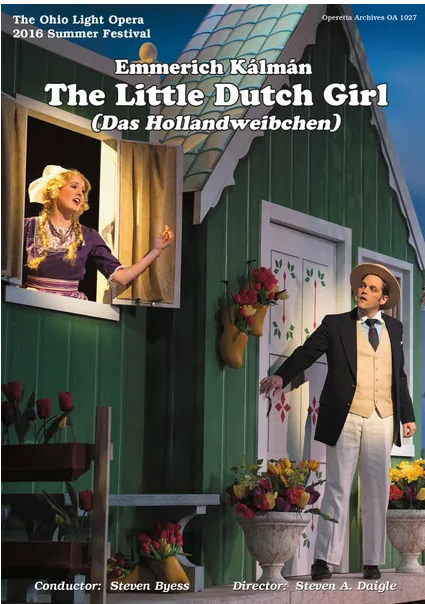 The DVD version of Kálmán’s “Hollandweibchen” based on an Ohio Light Opera production. (Photo: Operetta Foundation)

A Little Dutch Girl was “the first Viennese operetta after World War 1 to be performed in a former enemy land – in this case, London.” That’s what we learn in the English version of Stefan Frey’s Kálmán biography Laughter Under Tears (translated by Alexander Butzinger): “On December 1, 1920, at the Lyric Theatre, that ‘downright hard currency waltz’ of ‘little Dutch Girl and bonnet’ sounded from the throat of opera singer Maggie Teyte.” Apparently, the nostalgia of the show and the vocal charm of Miss Teyte worked their magic on West End audiences, the show ran for 215 performances.

There’s an operetta recording from 1918 that gives some idea how Maggie Teyte sounded singing the genre:

However, having an opera star in the title role was not a guaranteed recipe for success. In Berlin then-famous soprano Claire Dux ventured into Hollandweibchen territory at Metropoltheater – and landed a flop. Stefay Frey writes about this in his essay “Eine Sünde wert: Operette als künstlerischer Seitensprung” in Kunst der Oberfläche: Operette zwischen Bravour und Banalität. He quotes a Berlin review that says “We’re spoiled by Miss Massary. The grande dame – which an operetta diva must represent – is outside of Miss Dux’s range. She lacks lightness of touch, pliancy, and elegance. The effect of her wonderful costumes evaporates, because she doesn’t know how to use them as an integral part of her role portrayal.”

Left standing at the altar

Well, I am very tempted to say exactly that about the new DVD version from Wooster, Ohio. Meagan Sill as Princess Jutta looks quite ravishing as the bride left standing at the altar by her fiancée, who runs off to Wijk aan Zee in Holland to escape the pre-arranged marriage. But Miss Sill never gets beyond the point of being an attractive “clothes hanger.” And she has no vocal sensuality to make this princess-in-distress a musical magnet: neither in the melancholy waltzes of act 1, nor in the Lorelei kind of serenade in act two (set to a lilting barcarole rhythm). And she certainly doesn’t have the cheekiness to pull off the revenge plot in which Princess Jutta goes after her run-away-groom to seduce him, dressed up as a simple Dutch country girl, just to leave him standing at the altar after he’s fallen head over heels for her, without knowing that she was his original bride all along. 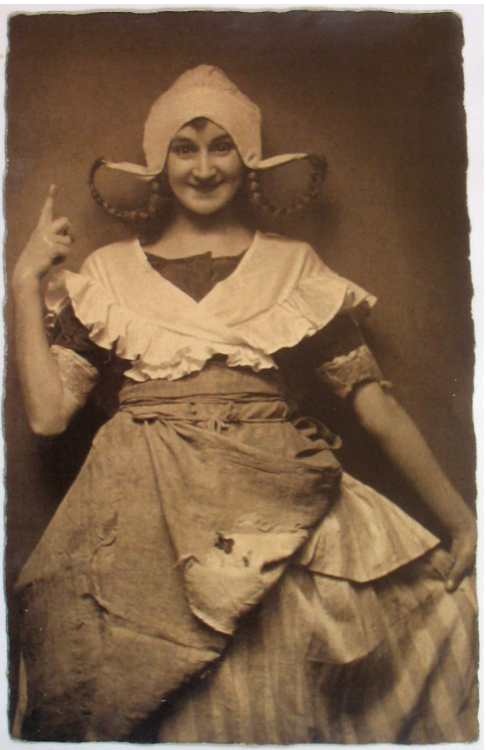 Ida Russka as “Das Hollandweibchen” in the world-premiere production in Vienna, 1920. (Photo: Archive of the Operetta Research Center)

One look at world-premiere singer Ida Russka makes it clear that there’s a lot more comic potential in the role than Meagan Sill gets out of the part. But I’d like to stress that I have little doubt that Miss Sill could probably rise the challenge with a different kind of musical director and stage director.

Here, you have Steven Byess conducting in a minimal-effort way, which is okay if you want to hear the full score on a one-time-only basis. But considering that this is a DVD release, it’s tragic that OLO isn’t able to come up with better artistic leadership when they have the luxury of Operetta Foundation releasing their productions on DVD onto the world market. (Which really is an incredible luxury, for which one should be eternally thankful to Michael and Nan Miller, who make this happen.) 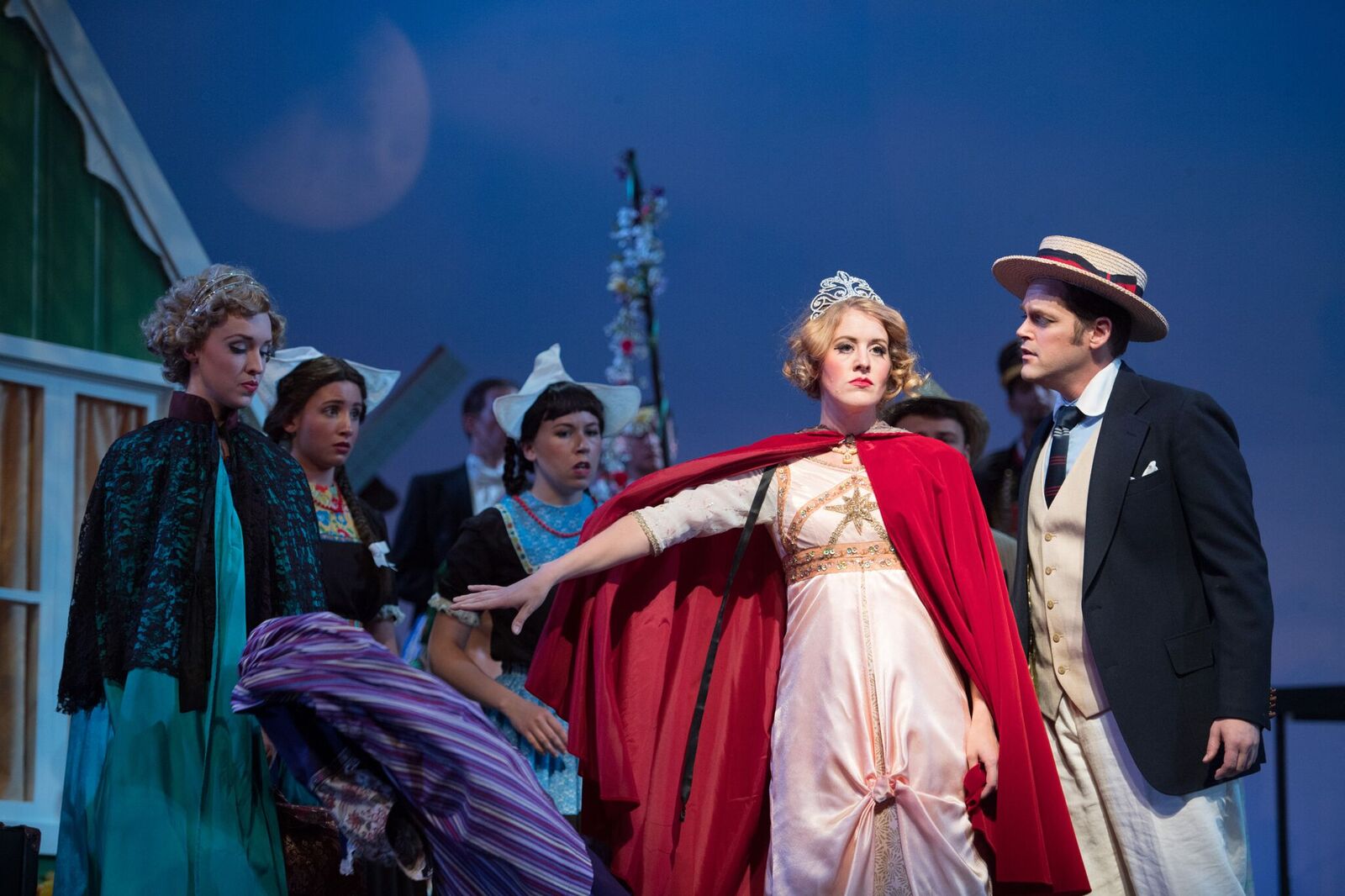 A melodramatic moment from “Hollandweibchen” at the Ohio Light Opera. (Photo: Matt Dilyard)

The staging and new English translation are by Steven A. Daigle, and they are also only digestible on a one-time-only basis. There’s hardly any interaction between the actors, the dialogue scenes fall flat on their faces (even though you can hear that there’s great potential in the book). And most performers – among them Clark Sturdevant as Prince Paul – are put in ill-fitting costumes that do nothing to make them look dashing; an effect that the camera doesn’t improve. It’s particularly sad, because the actors are actually all good-looking, Mr. Sturdevant included. (Costumes are by Stefanie Genda.)

Considering that OLO wants to emphasize “tradition” and lost operetta “history,” I don’t really understand why they did not opt to recreate some kind of historical cardboard set, as one might have seen in Vienna, London, Berlin, or the USA were Hollandweibchen never got beyond a tryout in New Haven in 1925. (With a new book by Guy Bragdon and new English lyrics by Joe Burrows; the London production had lyrics by Harry Graham.) 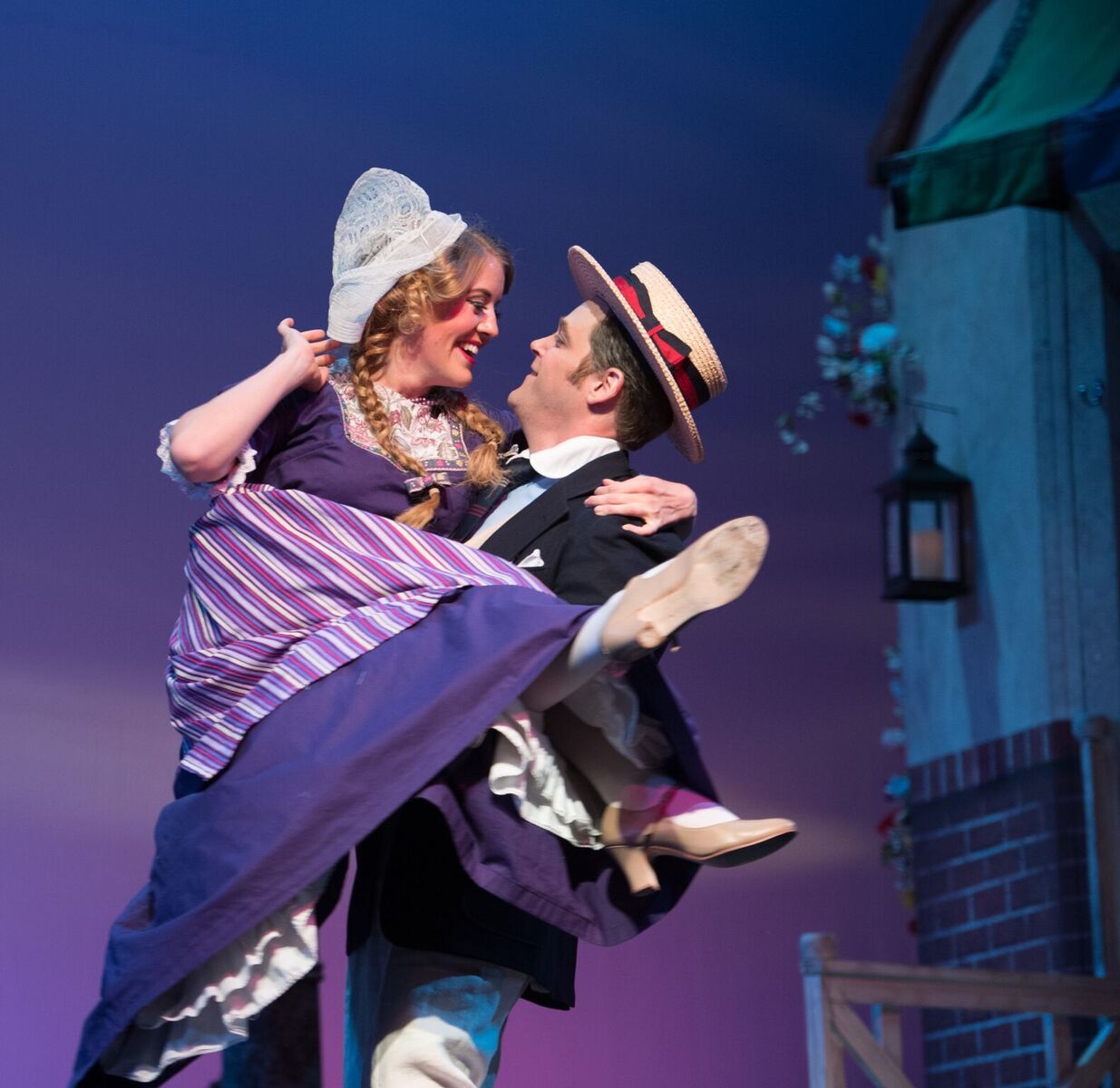 Scene from Kalman’s “Hollandweibchen” at OLO, with Sturdevant as the Prince and Meagan Sill as the Princess dressed up as a little Dutch girl. (Photo: Matt Dilyard)

The sets you see on the DVD (by Tymberley Whitesel) are remarkably uninspired, neither nostalgic nor historic, nor witty or modern. Nor a combination of all of the above. I am fully aware that OLO is a small company with a limited budget. But this isn’t a question of money, it’s a question of inspiration. Especially if you are a small company dedicated to digging up forgotten works and bringing them back for new consideration, with the possibility of getting a DVD out into the world to stir a wider discussion, this Hollandweibchen revival project kills itself the second the curtain goes up and you see a youthful chorus just standing around waiting – and standing there some more, still waiting for something to happen.

Alternative version from Vienna and Cologne on CD

I feel terrible saying all of this, because Hollandweibchen actually is a show very dear to me. When I moved to the Netherlands, two decades ago, I helped get a first cast album out that was released by Gala Records. It’s a Viennese radio production starring Gerda Scheyrer as Princess Jutta and with Toni Niessner as the Prince’s side-kick, Dr. Udo von Sterzel.

There’s another radio recording from Cologne that’s also out on CD in the meantime, with Herta Talmar as Jutta.

They certainly don’t come anywhere near the glories of a Miss Teyte, vocally speaking. Nor do they possess the fun Ida Russka oozes. There’s no naughtiness of any kind, in either recording. But you hear classic radio ensembles from the 1950s/60s that get you through the score with good singing and the then-standard style. (Which is not the style of 1920.)

Leave it to Lubitsch

There hasn’t been a recent attempt to breathe new life into the show and test its possibilities, other than OLO. If you want to see what is possible with such nostalgic material without seeming totally outdated, then watch the DVD of Lubitsch’s Walzertraum adaption: The Smiling Lieutenant. That 1931 movie more or less tells the exact same story – minus act 2 set in Wijk aan Zee – and demonstrates what rousing fun can be had with nutty royals and arranged weddings.

You could also watch the wonderful trash series The Royals for a more recent approach to the topic. With an amazing cast, by the way, and some hilarious scenes unfolding in the royal household. 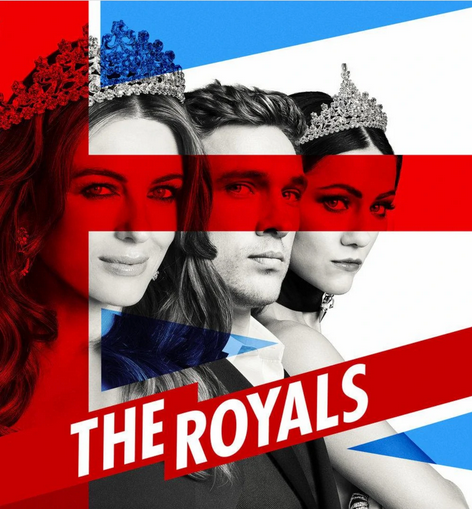 The TV series “The Royals” with Elizabeth Hurley as the British Queen. (Photo: Lionsgate Television)

And if you want to check on the limitless scenic possibilities of an operetta set in the Netherlands, try the 1998 book Holland Mania by Annette Stott. It gives visual examples from art history, tourist souvenirs etc. on how act 2 of this Kálmán operetta could and should look to really take off.

I am aware that this is a lot of wishful thinking. In the meantime, the OLO version remains the only one available on DVD. And on the plus side: it allows you to at least get a basic idea of the show, even if new lyrics such as “Little Dutch girls, with their bonnets, start their romance as platonic” make me cringe and wonder why the Harry Graham version wasn’t used. Or a better translation of the very funny German original which is much more tongue in cheek and straight forward, sexually speaking: “Hollandweibchen, mit dem Häubchen, küsst man nicht zum Zeitvertreibchen…” And that’s 1920, mind you, not 2020!

But who knows, maybe others will like this Wooster production much more than I do. Check it out yourself and form an opinion!

To order the DVD directly from Operetta Foundation in Los Angeles, click here for their web shop.