Broadway at last! The John Kander and Fred Ebb musical, originally conceived as a vehicle for Angela Lansbury, who withdrew from the show because of her husband’s illness to be replaced by Chita Rivera, has enjoyed productions dating back to 2001 at Chicago’s Goodman Theater, followed later by mountings at the Signature Theater in Virginia (2008) and Williamstown last year. There was also a 2011 concert reading. 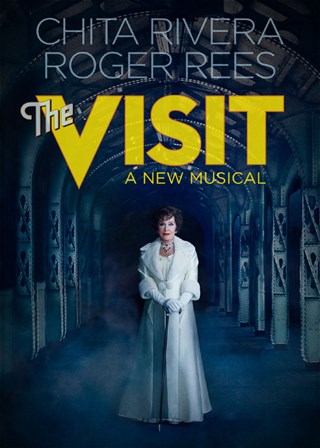 Poster for the 2015 Broadway production of “The Visit.”

I didn’t catch any of those, but the Williamstown production that has arrived on the Great White Way after this protracted tryout, under the direction of John Doyle (with choreography by Graciela Daniele), is quite superb.

For starters, this is, I think, one of the best Kander and Ebb scores, richly varied, with not a weak number in the bunch: “You, You, You,” “Love and Love Alone,” “The Only One.” Larry Hochman’s orchestrations and David Loud’s arrangements are simply lovely, creating a moody and distinctive European sound palette that pulls you right in.

Terrence McNally’s book is remarkably faithful to Friedrich Durrenmatt’s 1956 play. Insanely wealthy widow Claire (Rivera) returns to the town of Brachen that once scorned her. The townspeople expect she’ll beneficently restore their faded fortunes. But she is, in fact, seeking vengeance on the man who loved and betrayed her, Anton Schell (Roger Rees) now remarried (Mary Beth Peil). Claire will give the town billions if they will kill Anton. Of course, the mayor (David Garrison), the priest (Rick Holmes), and the schoolteacher (Jason Danieley) reluctantly assert they cannot, in all conscience, comply, But human nature soon rears its ugly head.

Following in the footsteps of John McMartin, George Hearn, Mark Jacoby, and John Cullum, a bearded Roger Rees gives an especially fine dramatic performance, and sings well, too. Michelle Veintimilla and John Riddle beautifully play the couple in their days as young lovers.
Rivera is quite the marvel, giving an authoritative and well sung performance (even though her voice has more of a vinegar flavor than ever).

Dan Moses Schreier’s sensitive sound design contributes to the compelling dramatic and musical ambiance which is sustained all evening long.

I look forward to the recently announced CD of this beautiful score.