Theater memoirs are rarely published in Hungary, mostly because they are not being written. The entangled interpersonal relationships of artistic creators and politics hardly allow anyone who once held a position to go public, even retrospectively. This new book by Miklós Gábor Kerényi with the title A “Rómeó…” diadalútja (“The triumphant path to Romeo”), regardless of its quality, is a unique and important document of the Budapest musical theater scene and of the recent history of the Budapest Operetta Theater. 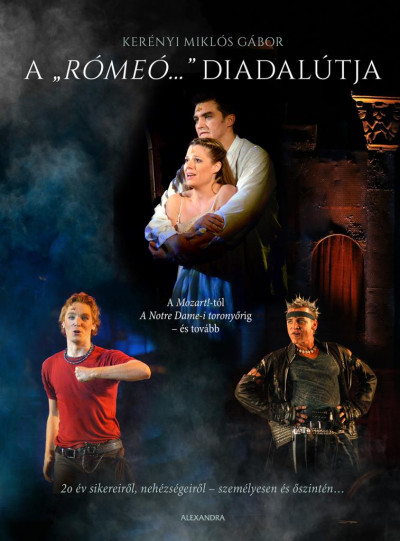 The author – better known by his registered trademark nickname “Kero” – was the director and manager of the Budapest Operetta Theater between 2001 and 2014. His biggest success was the 2004 Budapest production of Gérard Presgurvic’s Roméo et Juliette: de la Haine à l’Amour, which ran for 500 performances and became a cultural phenomenon.

From 2014, Kero’s title changed to artistic director of the company and his colleague, György Lőrinczy was appointed as new manager.

Kero was removed from his position in 2018, due to his involvement in the Hungarian version of the #metoo movement. In order to preserve his own position, Lőrinczy immediately distanced himself from Kero, who took this as a “betrayal” of his friendship.

As the title suggests, most of the book is about the process how a new version of Presgurvic’s Romeo was created. Memoir authors usually focus on anecdotes, but these are not dominant in Kero’s book. He details the process of casting, rehearsals, and even the marketing campaign, like a production diary, illustrated by two photos per page on average.

However, the most interesting part of the book is when the author openly talks about the ways they managed foreign relations and the political ideals of his theatre (e.g. making the Budapest Operetta Theater a “state” theatre again). Kero does not pretend to be unbiased: his anger towards Mr. Lőrinczy is very explicit (his name is not written once, only referred to), and several chapters are dedicated to the #metoo-scandals “explaining” and denying everything.

In his version of the story, Kero is only a victim of “false allegations” and craves for some unclear “rehabilitation”; despite the fact that after a short gap, he was directing again both in Hungary and in Russia (according to the news, this spring Lehár’s Frasquita will be staged by him at the St. Petersburg Theater of Musical Comedy).

The book starts in 2001, explaining the race of Budapest theaters for the rights of The Phantom of the Opera. These were obtained by Madách Theatre, which, as Kero writes, put operetta on a different track, leading to the staging of Presgurvic’s Romeo and an enourmous success.

Luckily, #metoo also put things on a different track. Otherwise it is unlikely that we would have such an insightful source about the practices of the Budapest Operetta Theater in the new millennium.