One of the great popular musical performers of the nineteenth century’ is Andrew Lamb’s description of the subject of this splendid biography. But, by the time you have finished reading it, you may wonder – as I did – if, indeed, Henry Russell – in the extravagant, tuneful, ‘made-for-the-people’ one-man shows he played throughout America and Britain for a quarter of a century – wasn’t simply the most outstanding entertainer of them all. And the story of his life, his performances and his songs, his endless brushes with the press, with the publishers of his songs, with plagiarists and with imitators, with the musical snobs who sneered at him as ‘popular’ while he filled vast halls with paying customers, on both sides of the Atlantic, certainly makes for highly entertaining reading. 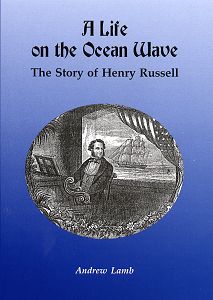 Someone as celebrated in his time as Russell has naturally been treated in print on a number of occasions. He also put out, in his old age, what passed for his own memoirs. Given the man’s highly-coloured personality, and I suppose his age, it is not surprising to discover that his ‘memory’ was very faulty indeed and that ‘a good story’ was regularly preferred to the truth. So Dr Lamb has had a double job to do: to deconstruct the non-facts, and to replace them with real facts. The manner in which he has achieved both these things in this finely detailed biography is remarkable.

Also remarkable is the way he recreates the musical and theatrical world in which Russell worked. Too often, in show-business biographies, you find that the author knows his main subject well enough, but that the supporting characters in the tale wander by as nothing more than a list of names, signifying nothing. It is quite clear that this author, in this book, knows exactly who everyone he mentions – large or small — was, and exactly why they are in his story, and this gives a whole extra dimension to his main subject. It also means that we get to meet some wonderfully colourful people from the musical past, among whom my personal favourite was the appalling Russell imitator, Henry Smith.

Impeccable in its facts, important in its subject matter, always interesting and enjoyable, A Life on the Ocean Wave (entitled for Russell’s most famous song) is the very model of an historical musical biography.