Admittedly, you would not necessarily expect a “queer” operetta in Viktor Orban’s Hungary. But that’s exactly what you get in Én és a kisöcsém (Me and My Little Brother) at the Budapest Operettszínház. It’s a gender-bending vaudeville operetta by Mihály Eisemann from 1934, well-known and beloved by many Hungarians and now played as a “national treasure” at the Budapest Operetta Theater in a brand new production. A Hungarian answer to Victor/Victoria. 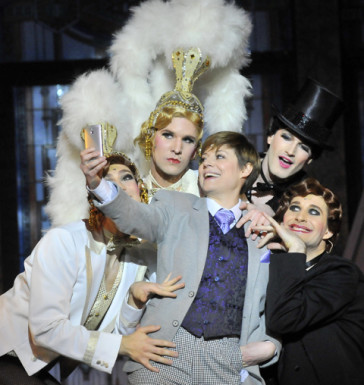 The dressed up Kató surrounded by equally cross-dressed cabaret dancers: “Me and My Little Brother” at the Budapest Operettszínhás.

I must confess that I had never heard of this show when I sat down in the sold-out Budapest Operettszínház, so I did not know what to expect. Thanks to the English supertitles it was easy enough to follow the story of a young girl called Kató, daughter of a Hungarian industrialist, who is supposed to marry a Danish industrialist named Andersen – who turns out to be very anti-women. According to him, they should not be allowed to work, instead they should stay at home and take care of the family, if anything. (My alarm bells went off, admittedly.) But then the operetta takes a rather unexpected turn. Kató dresses up as a young man, claims to be her own little brother, and joins Andersen as a travel companion on a trip to Venice.

There, the two men start a “bromance” and explore the world.

The result? Kató falls in love with Andersen and tries to be physically close to him; which leads to some rather “modern” situations that change both her view of him, and his view of her. And of women in general.

As if this were not enough gender-bending, there is also an old detective, sent after Kató by her father-the-industrialist. Once this detective arrives in Venice, he disguises himself as a woman and takes a gondola, only to find that he enjoys the flirtations of the hunky gondolier. Confused by this, be tells his colleagues: “I’ve never had much luck with women, and I’ve never felt so alive as when this man gave me the eye. Maybe I should give this a try?” And he does. 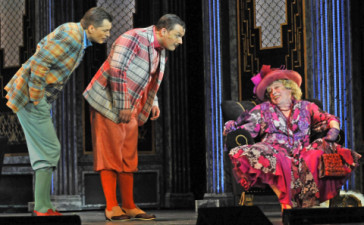 The older detective tells his young colleagues that he intends to explore a gay romance with a gondolier in “Me and My Little Brother” at the Budapest Operettszínház.

True, this particular sub-story is treated as total farce in the production by Attila Réthly, with a revised script by Attila Lőrinczy. But it still creates some touching moments. At least I was touched, and stunned by the bouncy 1930s music. It’s the Hungarian answer to W. R. Heymann or Vincent Youmans. And just like most Germans can sing along with Die Drei von der Tankstelle and most Americans can hum the hit songs from No, No Nanette, Hungarians in the auditorium embraced the songs from Én és a kisöcsém.

You could tell that this was supposed to be a period piece, which is reflected by the sets and costumes. However, the orchestra played new musical arrangements by Tamás Bolba that were decidedly non-period, brash and rather loud, due to amplification. It is the same thing that happened with recent Drei von der Tankstelle productions that I saw; apparently there is little desire to return to the elegant style of the 30s when audiences used to pop-musical blockbusters expect a different sound experience.

Talking of blockbusters: the Budapest staging introduces Dóra Szinetár and Attila Dolhai, the legendary pair from the pop-opera Romeo and Juliet, as Kató and Andersen, and features Árpád Zsolt Mészáros with a young actress, and Panna Simon in her first operetta role. It was something of a novelty, I was told, that the members of the musical ensemble played “operetta,” instead of the more “old-fashioned” operetta people. But it worked well, mostly because the actors all oozed charm and were fun to watch, and listen to. 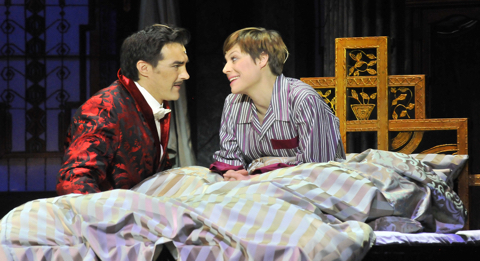 Homoerotic glances: Kató and Andersen in bed, in “Me and My Little Brother” at the Budapest Operettszínház.

Orban’s government demands that subsidies for theaters should be used to preserve “national” treasures instead of presenting “foreign” products. In the case of this Eisemann operetta from 1934, it is interesting for an out-of-town visitor like me to get to know a show from a repertoire mostly unknown in the rest of the world. It allows the viewer to make interesting comparisons, also with famous Hungarian operetta composers of the time who wrote similar vaudeville pieces, like Paul Abraham for example. 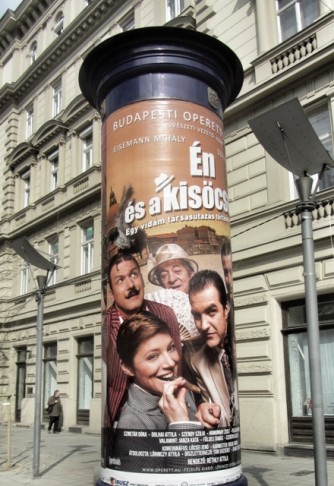 Advertisement for the new production of “Me and My Little Brother” at the Budapest Operettszínház 2015.

And: if the Komische Oper in Berlin can put a focus on reviving “Berlin Jazz Operettas” from the 1920s, then why should the Operettszínház not focus on famous Budapest titles from the 30s? (Admittedly, it’s the political implications that make this a little disturbing.)

Me and My Little Brother might not be the greatest show in the world, but it allows for fascinating “time travelling” and the realization that back in 1934 sexual identity and gender roles were discussed with wit and vigor. And even a modern Hungarian audience does not seem to have any problems with the content. Maybe because in the end it turns out that all was but a dream?

For more information about the production and performance dates, click here. Below you find the hit songs in an alternative production.