The Zurich Opera presented its new Csardasfürstin on Friday, after a long Corona delay. As compensation for the waiting, the production by Jan Philipp Gloger was streamed live on the company’s homepage and will be available there for 48 hours. Because of Corona there were also changes in the cast, the most noticeable being the new conductor: Lorenzo Viotti. Before the actual performance in Zurich started, you got to hear what Viotti has to say about the genre, and that is rather refreshing.

In his pre-performance talk, filmed on the rehearsal stage, Viotti Jr. explains that he was only called in July 2020 to step in. Originally, he was supposed to have conducted Carmen in New York, but that was cancelled. So instead of Carmen it was Csardasfürstin.

“I didn’t even know the piece,” Viotti says, only “some melodies.” Still, he was “extremely happy”: “Because I love – love! – operetta.”

As it turns out, Mr. Viotti had his first experiences as a conductor at Volksoper Wien where he assisted in a production of Oscar Straus’ Ein Walzertraum. He studied in Vienna, played with various Viennese orchestras. So, according to his own verdict: “This really is in my blood!” (It was obviously a fast and furious infection.) 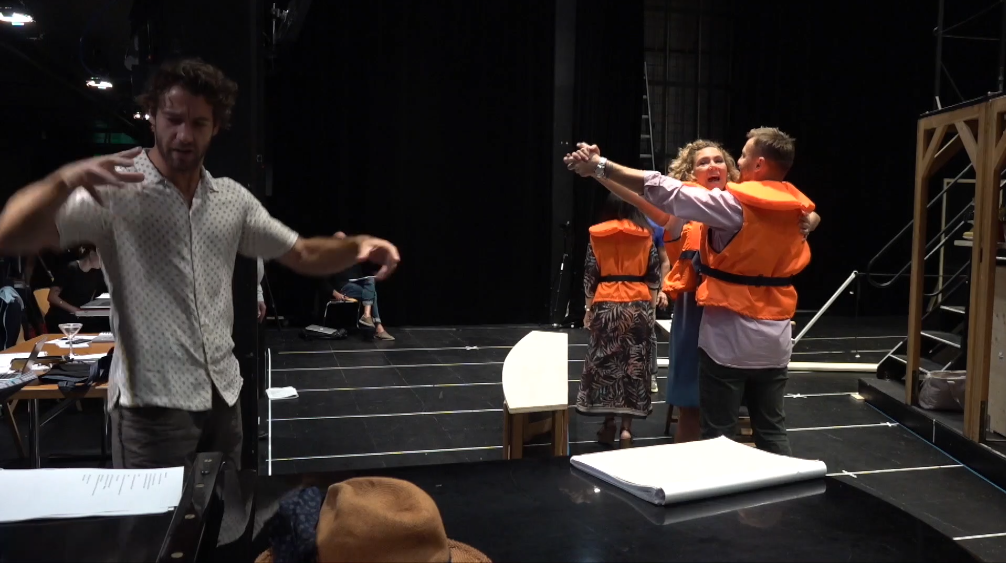 Conductor Lorenzo Viotti during a “Csardasfürstin” rehearsal with Annette Dasch and Pavol Breslik, as seen in the stream from Zurich opera. (Photo: Screenshot / www.opernhaus.ch)

He goes on to explain the reasons for his love: “This music gives you so much joy, happiness. It’s light, [but] it’s [also] very difficult. You have a lot of rubato.” It’s “an art” to master this rubato. “If you know how to conduct operette,” says Viotti, “then to conduct an opera is sometimes easier.” Why? Because “you need taste”: “You need to risk [things], [dare to play] really fast, really slow, rubato, freedom in tempo.”

These are words I personally wish more modern day conductors would take to heart, because these are aspects you hear on historic recordings, but that are almost never realized today when classical music people venture into operetta land. “Every time there’s a surprise,” says Viotti about the music and tunes that return many times over, but always in different guises. He stresses that he wants some phrases “not well played,” i.e. rough and dirty, and then mix these with “very articulate” passages. For contrast and effect. And to keep the music alive. 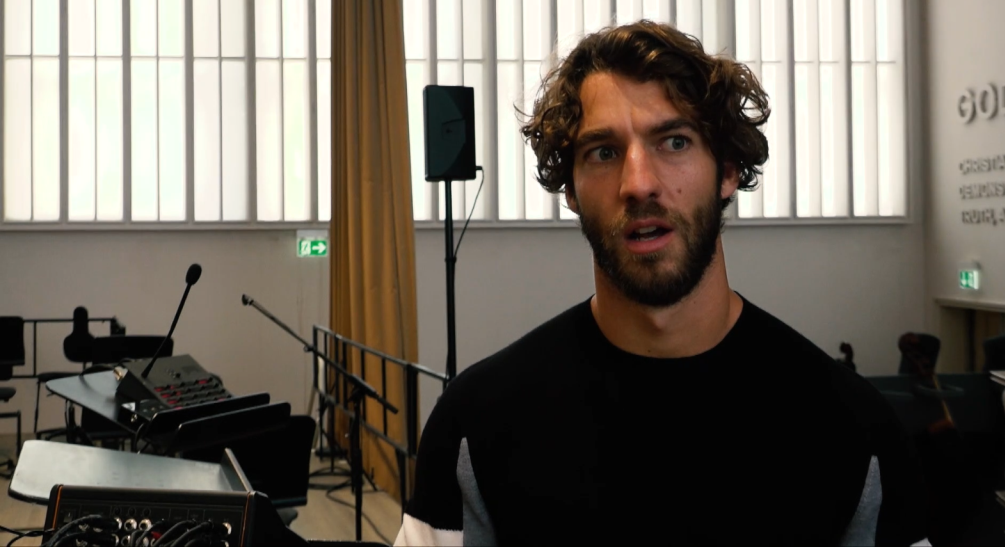 Conductor Lorenzo Viotti has a few critical things to say about the classical music world in his pre-performance talk. (Photo: Screenshot / www.opernhaus.ch)

Few people in the classical music world dare to do that, embrace the dirty side of the genre. With a strong dose of self-criticism Viotti says about the audience, the musical institutions, the orchestras, and the conductors: “We’re sometimes too stiff, too correct. We don’t dare to lose ourselves into beauty, into sharpness, into caricature.”

“Don’t be afraid” to come to the world of operetta, he says disarmingly. “We’re welcoming you with big arms, with a big smile, with a lot of surprise. So: chill and enjoy!” 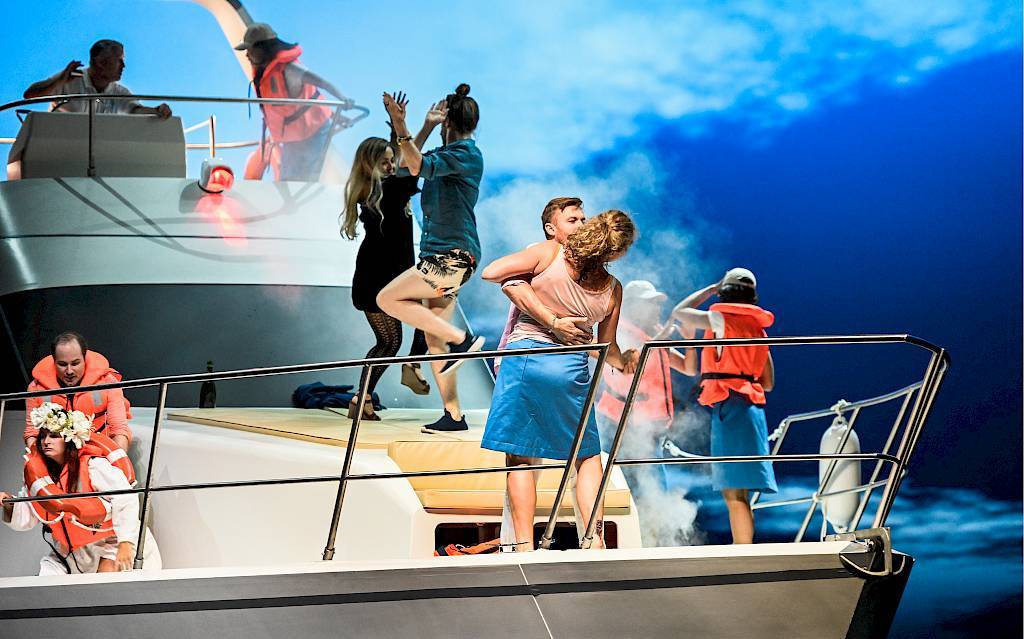 The Zurich ensemble on board of the “CF” (“Csardasfürstin”) in Jan Philipp Gloger’s new production. (Photo: Toni Suter / www.opernhaus.ch)

The immediately following two hour production by Jan Philipp Gloger can certainly be labeled “surprising”, because in it some central elements of the Csardasfürstin plot are thrown overboard, literally. The action is set on a yacht somewhere in the South Pacific. Sylva is not an independently successful show star anymore, someone who earns her own money, has made a name for herself, is about to embark on a prestigious world tour to the USA, no, in the Zurich version she is a towel girl / cleaning lady on the ship of some Eastern European oligarch. She herself has no money, no particular talent, no fans, she’s a nobody who happens to have caught superrich Edwin’s eye as she serves the drinks. Which creates a totally new power balance in this story, reversing a lot of the original feminist sting that Jenbach & Stein created.

Dancing with the Aliens

You might wonder why this oligarch Edwin cannot marry the towel girl he’s hired for his yacht. The answer is: he’s already married to Anastasia. And his wife is also on the boat, knocking herself out with alcohol because she’s frustrated with her husband who apparently has had flings like this before with previous towel girls, but this one has gone further and threatens their happy union. 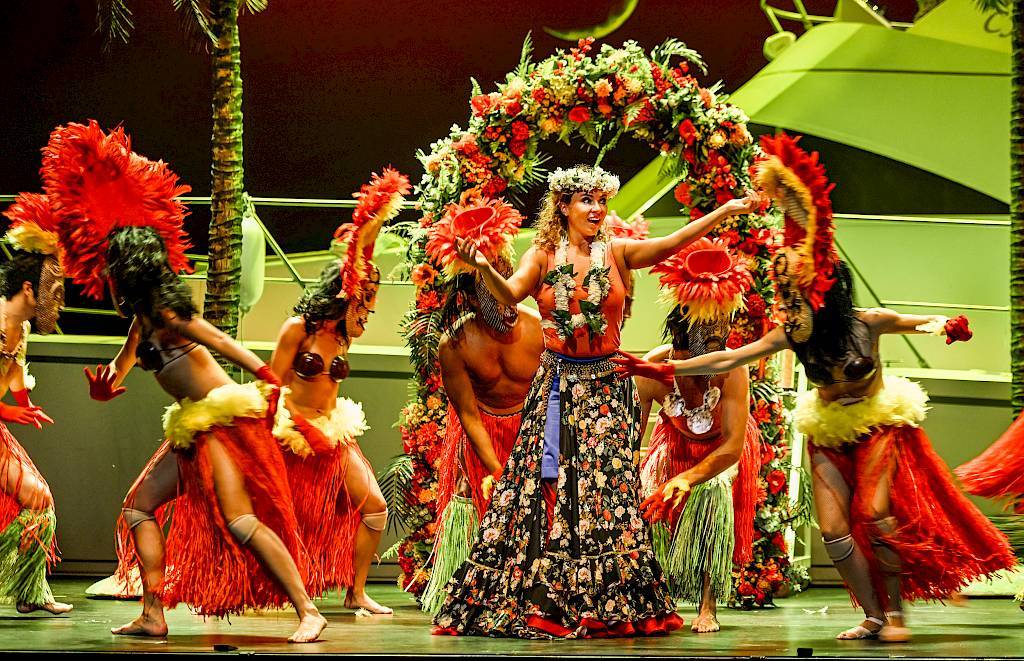 How this situation affects the act 1 finale in which Edwin promises to marry Sylva? Here, the engagement party is presented as a Polynesian wedding with South Sea costumes and dancing – combined with czardas rhythms. When the wife walks in and it becomes clear to Sylva (now?) that her wedding will never happen – yet she doesn’t have anywhere else to go and has no money – Sylva returns to the boat. And off they all go, back to sea!

Because there is no obvious way out of this newly invented marriage constellation, the passengers on the yacht sail into a sort of dream land in act 2 and witness a sort of Armageddon out on the ocean. The world explodes in act 3, and we’re suddenly in some sort of outer space where aliens appear. Who start dancing with the humans to the final waltz: “Tausend kleine Englein singen habt euch lieb!” (No, they didn’t change the text from “angels” to “aliens”.) 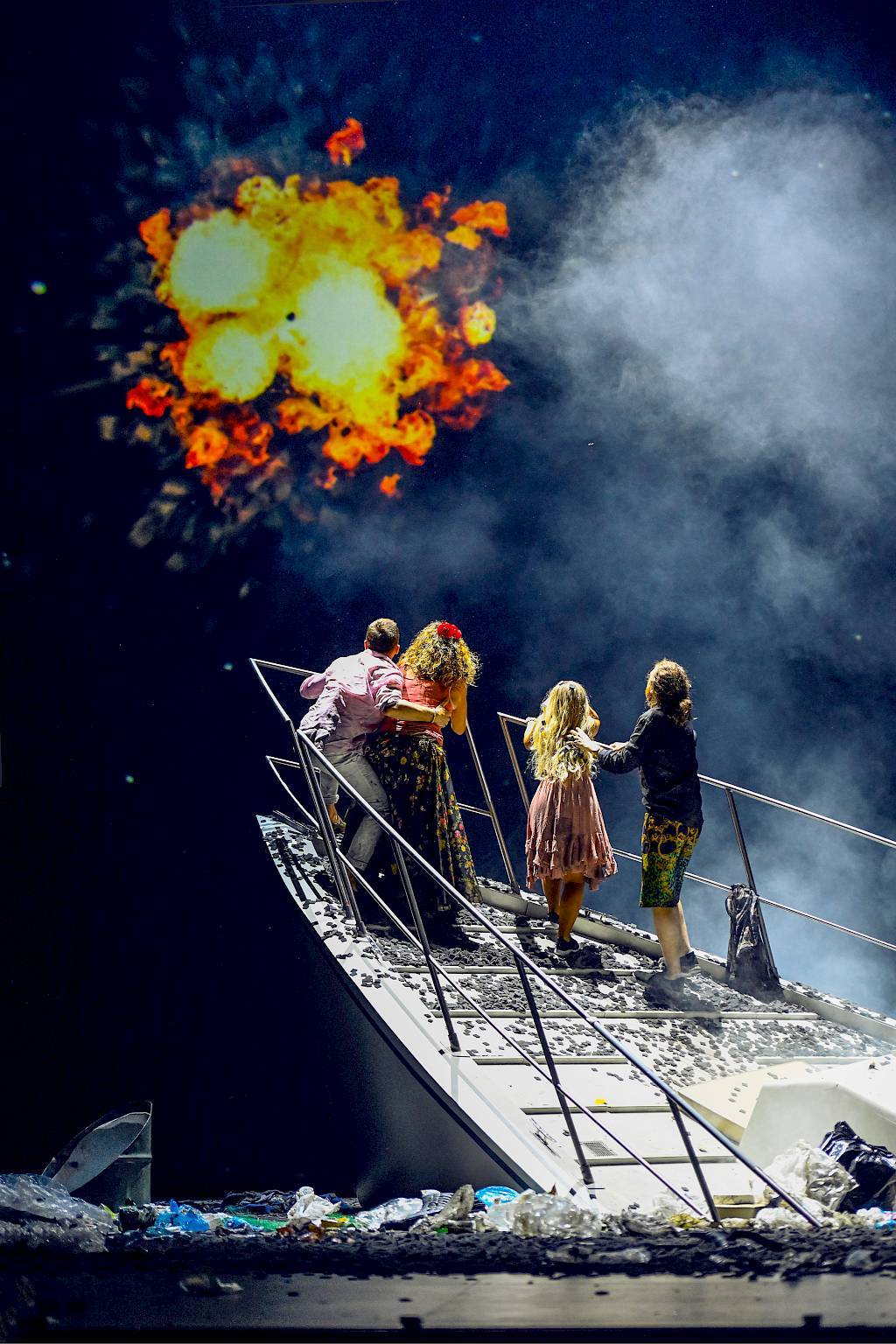 The world falls apart at the end of “Csardasfürstin” in Zurich. (Photo: Toni Suter / www.opernhaus.ch)

I must confess that I found this staging deeply disturbing in its blatant stupidity, creating almost a caricature of the original story. Probably not the kind of caricature Mr. Viotti was talking about when discussing operetta. It’s the kind of brainless caricature that has given operetta a bad name over the decades, and I would have expected something different from Switzerland’s premiere opera company. (The dramaturg for this production is Claus Spahn.)

Add to this Annette Dasch as Sylva Varescu, singing the famous role with facial distortions that indicate that these notes do not come easily to her. The sound she produces is so forced, so unflexible, so unattractive that it’s almost painful to listen to. And because she has to invest so much energy into the production of “a voice” (even though the performance is miked) she spends almost no time giving meaning to the words, playing with the lyrics. Let alone creating an interesting character. 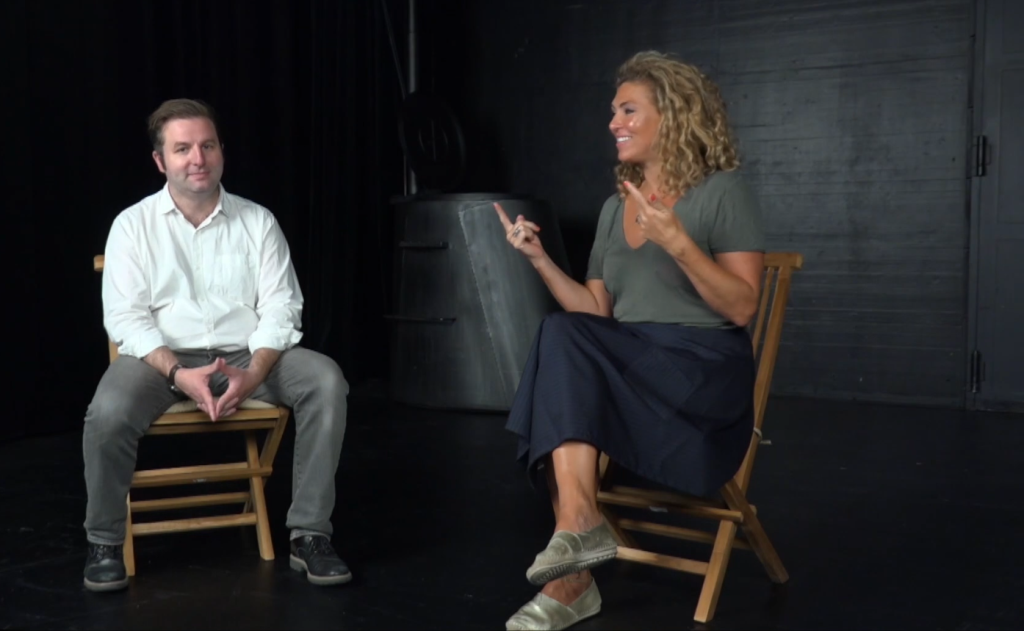 Annette Dasch and stage director Jan Philipp Gloger in an charming and interesting pre-performance talk, as seen in the live stream from Zurich. (Photo: Screenshot / www.opernhaus.ch)

What’s astonishing is that when you hear Dasch talk as a private person she is the most charming and relaxed personality you can imagine, stressing how the story of a girl like Sylva falling in love with a superrich man is still relevant today, how today’s women can relate to this… but when she is on stage, Dasch becomes stiff and super correct, i.e. exactly what Viotti warns about. And apparently he, as musical director, couldn’t change that. (Maybe Annette Dasch is immune to any suggestions in that direction?)

On the company’s website you were able watch the performance from three different perspectives. One was the staging itself, a second video focused on Lorenzo Viotti, and the third stream showed the orchestra with Viotti, all seated with security distance between the musicians in the large hall nearby.

The sound coordination with the stage worked well enough, so no complaints here. There were also some ravishing phrases in the orchestra, and some consciously rough edges that did Kalman good. But with this cast, Viotti could not really create the lovable operetta magic he promised.

As Edwin, tenor Pavol Breslik sang well, but did not come alive as a character either. Which is something Rebeca Olvera as a crazy rich wife wandering about with her cocktail glass in hand managed much better, she also sang with great ease and clarity, and with wonderfully light top notes. Spencer Lang as Boni had more beautiful curly long hair than Annette Dasch (which is quite an acahievement) and gave us an agile “international” playboy managing the entertainment on the ship, his falsetto refrain “Die Mädis von Chantant” might not be everyone’s cup of team, combined here with blatant “effeminacy” that doesn’t lead anywhere, storywise). Martin Zysset returned to Zurich and operetta as Feri Baci. (You’ll recall that he was Strauss’ Simplicius back in 1999 in the famous recording plus DVD from Zurich.) He’s the only one with some sort of gravitas here. 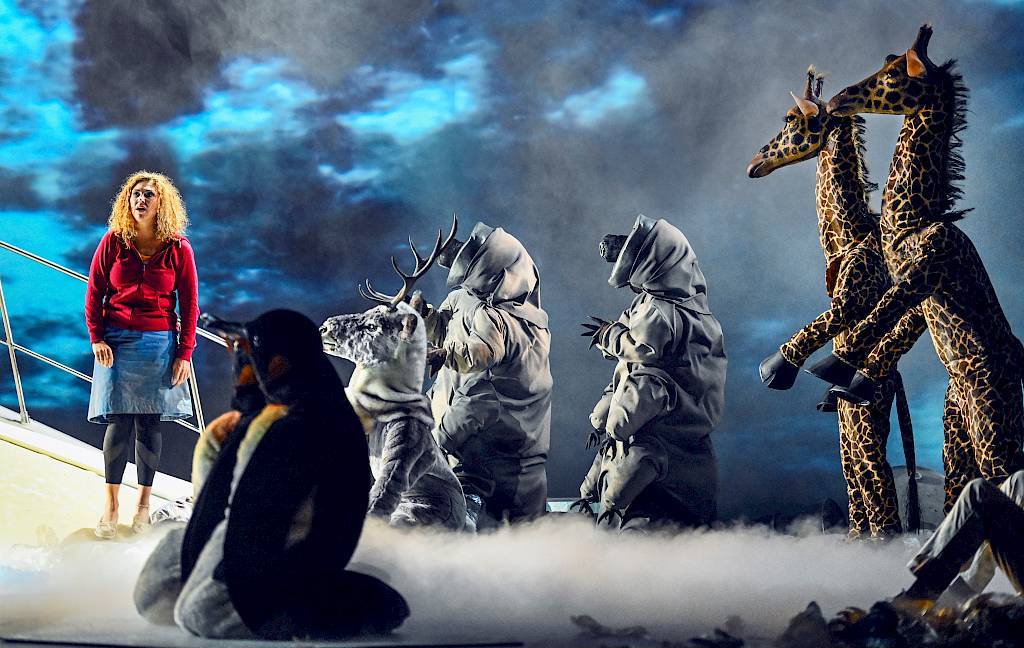 Annette Dasch and the animals she encounters in “Csardasfürstin” from Zurich Opera. (Photo: Toni Suter / www.opernhaus.ch)

What the dancing penguins, giraffes and other animals were doing in the dream sequences when the yacht sinks is something not quite clear to me.

In his own pre-performance talk the stage director says that “the experience of extinction” is something we today share with the authors back in the midst of World War 1. “Today, we realize that civilization doesn’t just continue. Our current catastrophes force us to take a step back.” He’s probably referring to climate change, which might explain the dead seagulls falling from the sky before the earth explodes. But is that all he has to say about Csardasfürstin? 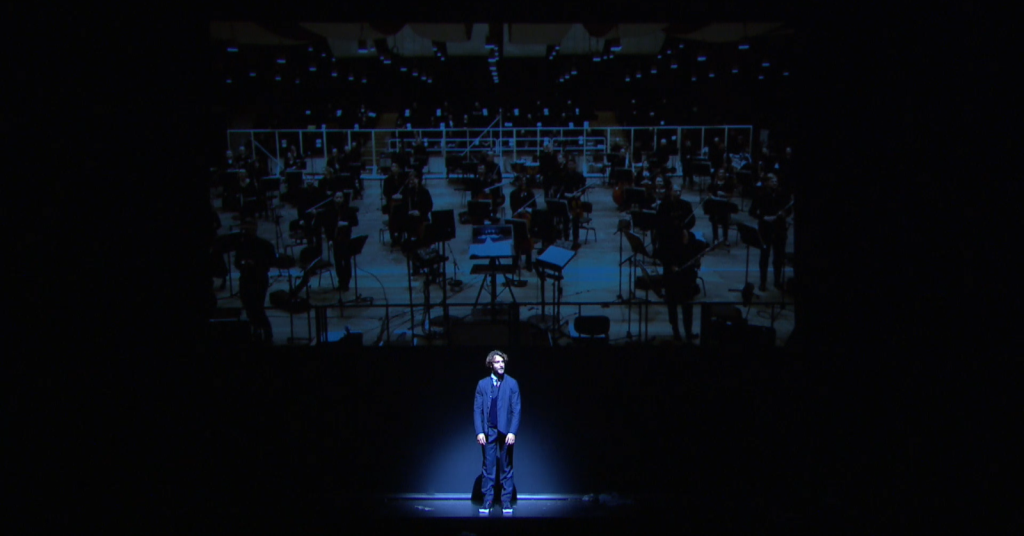 Conductor Lorenzo Viotti and the Zurich orchestra – zoomed in from the rehearsal stage – take their bows after the performance of “Die Csardasfürstin.” (Photo: Screenshot / www.opernhaus.ch)

Amazingly, there was not a single boo from the first-night audience in Zurich when Jan Philipp Gloger and his team came out (stage design by Franziska Bornkamm, costumes by Karin Jud). Though you could notice some restrained applause. The orchestra and Lorenzo Viotti on the other hand were cheered. I truly hope this young rising star will get to do a proper operetta production someday soon, with a cast that can “chill and enjoy” and overcome the “stiffness” of the classical music world. I’m sure Mr. Viotti is intelligent enough to do a little research and find out, for himself, what potential Csardasfürstin and other shows have, sonically and scenically.