Obviously, My Fair Lady is one of the greatest “modern” operettas ever. Almost everyone knows the score and the hit songs by Lerner/Loewe. Tonight, however, you can hear the “lost” 15 minutes from that famous show. And find out what was cut before the Broadway opening! 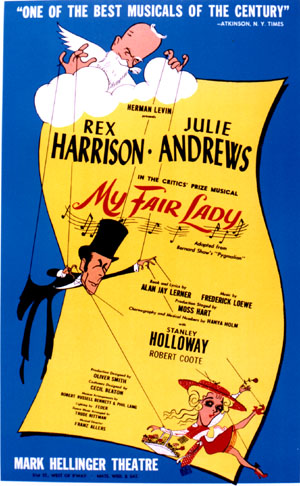 Poster for the original Broadway production of “My Fair Lady” starring Rex Harrison and Julie Andrews.

BBC Radio 4 will broadcast the seven song from My Fair Lady cut after the first preview in Connecticut. They were believed to be lost. But miraculously they were found in a box at the US Library of Congress in 2008 by Dr Dominic McHugh recently, and they will now be heard in a concert performance for the first time in almost 60 years. It’s a concert given by the University of Sheffield, where Dr McHugh teaches. He says it was “the most exciting discovery I’ve ever made.” Adding: “My Fair Lady is such a cultural phenomenon that to find material that belonged to it briefly and was then lost for a good 50 or 60 years was extremely thrilling.”

The first performance in New Haven included a 15-minute sequence featuring the songs “Come to the Ball” and “Say a Prayer for Me Tonight,” plus a ballet scene. But the show was too long, and the sequence was deemed superfluous. It was never performed again.

“Come to the Ball” was meant to be Rex Harrison’s big showstopper after Eliza had shown herself up at Ascot racecourse, according to Dr McHugh.

The website of the BBC News states: “It had been designed to show off his talents in terms of comic wit and charm,” Dr McHugh said. “He was trying to persuade Eliza to carry on with the lessons. She came back from this dreadful scene at Ascot and wanted to give up the lessons, and he persuades her in song. “He says, ‘Come to the ball with me.’ By the end of the song she’s persuaded. The ballet depicts the next series of lessons, and then at the end of the series of lessons she sings Say a Prayer For Me Tonight.” The songs had been cut for reasons of length rather than quality, Dr McHugh said. “All the accounts say the show was wonderful at the first preview, but that it went on all night. It really needed that bit of trimming. They were very clever at finding a solution that still worked in dramatic terms.”

“Say a Prayer For Me Tonight” was later used in the 1958 film musical Gigi. Other songs written for My Fair Lady, including “Lady Liza,” “Please Don’t Marry Me” and “Shy,” were ditched during or before rehearsals and so have never previously been performed.

Lerner’s widow Liz Robertson, who also played Eliza on stage in 1979, said he had loved “Come to the Ball,” but the composers had been “ruthless” if a tune did not fit in. “When a musical which is that perfect comes your way, you always think that’s how it must have been born,” she said. “But of course it wasn’t. It was a long, hard road for all the creative team and Alan and Fritz [Frederick] wrote many songs which were either discarded or were put into the show but didn’t last very long.”

After its success on stage, My Fair Lady went on to become a film starring Audrey Hepburn as Eliza, which won eight Oscars in 1965. Tonight’s concert, titled Accustomed to Her Face: The Lost Songs of My Fair Lady, will take place at Firth Hall in Sheffield.

Colin Paterson reports on the rehearsals:

The full concert will be transmitted at 20.09 h, British time. The concert should be available online afterwards on the BBC website.

We at the Operetta Research Center cannot wait to hear this, and sincerely wish that operetta researchers would also open a few more boxes in search for lost operetta material. We know this is a trend that has slowly started – but the Anglo-American musical theater world has shown that much more can be done on a much larger scale. If you can muster the enthusiasm! We believe operetta deserves such enthusiasm too; and not just the Lerner/Loewe type of modern operetta.