Yes, Mr. John Wilson and his orchestra are at it again. After they presented Cole Porter’s Kiss Me, Kate at the London Proms last summer, they have now released some more Porter: songs that were used in Hollywood and are among the most famous in the Great American Songbook. What’s interesting from an operetta perspective is why such re-recorded classics from the 1930s and 40s are a regular feature on the Anglo-American market, yet not when it comes to the equally great operetta titles from early sound films of the same era? 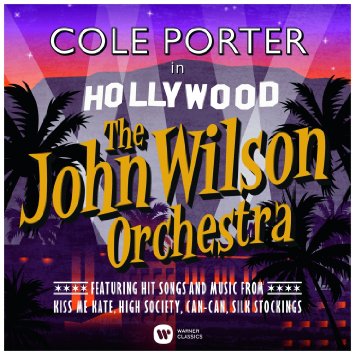 “Cole Porter in Hollywood”: the new CD of John Wilson and his orchestra. (Warner Classics)

If you listen to those famous operetta numbers in the film version of Die Blume von Hawaii, Der Orlow, Ball im Savoy, Roxy und ihr Wunderteam, Der Kongress tanzt, Die Drei von der Tankstelle etc., you’ll find that stylistically – and musically – they are very close to what happened in Hollywood at the same time. Most of the films mentioned above have never been released on DVD, they only circulate in copies of copies. Even if you managed to get hold of a really good copy, the sound is far from “stereophonic” (which the Cole Porter number from Silk Stockings heralds as the new requirement for … well, basically anything in 1957.) So new recordings of those scores, using the magical film orchestrations from the 1930s, would be welcome. More than welcome, actually.

Americans have been extremely active in that respect over the last few years. And the young and dashing John Wilson is only the latest exponent of this trend. He’s successfully offered fresh and polished versions of Rodgers & Hammerstein at the Movies or That’s Entertainment (“A Celebration of the MGM Musical”). Now comes a Cole Porter disc which includes 15 numbers with appealing singers, some of them better known (Kim Criswell), some less familiar (Matthew Ford, Anna-Jane Casey, Lance Ellington etc.).

They all face a problem any potential operetta project would also face: how do you deal with the stylistic example set by the famous predecessors? While most people today will not automatically know what Gitta Alpar, Rosy Barsony or even Willy Fritsch will sound like, the majority of Porter lovers will know what the original Hollywood versions of “From This Moment On”, “Always True to You In My Fashion” or “Who Wants to Be a Millionaire?” sound like. After all, the movies these songs stem from are all available on DVD, they are regularly shown on TV, and some songs even circulate on YouTube. For that younger – and older – generation that hasn’t time to sit through a whole film.

As charming as many of the singers on the new Warner Classics disc sound, they pale in comparison with the all-time greats that sang the Hollywood originals. That’s not really surprising.

And it wouldn’t bother me, in the least, if the young singers Wilson gathered had something new or individual to add to the material they are given. But they rarely do. What’s more: that glorious Hollywood sound with all the orchestra gimmicks is often played in a strikingly “understated” way. Take, for example, the opening number “Sterophonic Sound.” If you’ve ever heard the soundtrack, you’ll know that the sound engineers back in the olden days pulled all the stops out and illustrated the lyrics with a sound design that makes you smile all the way through – and lifts you off you seat, at the end. The Wilson version does not achieve that. It doesn’t even try. Sadly. Instead of celebrating the individuality of these song, they often come across as anonymous.

Maybe that’s a sign of our times? (I refuse to believe that.)

For me, the most convincing number on this Cole Porter disc is “Wunderbar” sung by Sarah Fox and Richard Morrison. The reason is that Miss Fox makes herself sound as close to Kathryn Grayson as possible. And that gives the track that extra personality, perversely.

Generally speaking, there is another big plus here: none of the singers are from the opera world, so you are spared tracks like Joyce DiDonato singing “Climb Every Mountain,” which she did on the older Wilson disc.

With all of this said, you have to also admit that all singers involved here are stylistically more interesting than most modern day operetta singers you hear in commercial recordings from Ischl, Dresden, Vienna or Munich. So, yes, this Cole Porter in Hollywood can be used as a role model of sorts. It could and should inspire operetta folks all over the world to get their act together and give Abraham, Kalman, Heymann, Granichstaedten & Co. the stereophonic treatment too. Meanwhile, enjoy the delicious Porter songs again. There can never be too many versions of them!

The CD is available from June 5 onwards.