As the author of Die Fledermaus (1874) and a whole series of other famous Strauss operettas, Richard Genée is not exactly an unknown personality in the Viennese operetta world. Even today. What is less known, though, is that he was a driving force in the transition of early Viennese operetta, entirely dominated and influenced by Jacques Offenbach, to something you might call an individual and “national” style of its own. Here is the first proper biography on Genée, written by Pierre Genée: Richard Genée und die Wiener Operette. 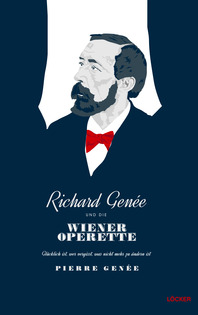 Without Genée’s guidance, Johann Strauss Jr. would never have written a successful operetta. Genée was the theatre man with great experience who gave more than a helping hand to the more famous Strauss who was a dance music man with no knowledge of the theater whatsoever. This new book subtitled “Glücklich ist, wer vergisst, was doch nicht zu ändern ist” sketches Genées career as a musical mastermind of works such as Fledermaus, Eine Nacht in Venedig and various other written in the 1870s and 80s, his collaboration with Suppé on Boccaccio and Fatinitza, with Millöcker on Bettelstudent and Gasparone. It also sketches his own successful career as a composer of operettas such as Seekadett, Nanon oder Wirtin vom goldenen Lamm.

Pierre Genée was born in 1942 and studied medicing in Vienna. He is a neurologist, but busy for years now with cultural themes. In this case he delves deep into his family’s history. 351 pages of fascinating genre history.