Admittedly, Heilbronn is not the first city that comes to (my) mind when talking about operetta “Made in Berlin.” Still, the Württembergisches Kammerorchester Heilbronn under artistic director Ruben Gazarian will present a New Year’s concert on January 5 entitled “Das ist die Berliner Luft.” A program filled with goodies from roughly 100 years of Berlin operetta history, from Eine Nacht in Venedig to My Fair Lady. Master of Ceremonies for the evening is internationally renowned counter tenor Jochen Kowalski, a great operetta fan and operetta promoter himself. 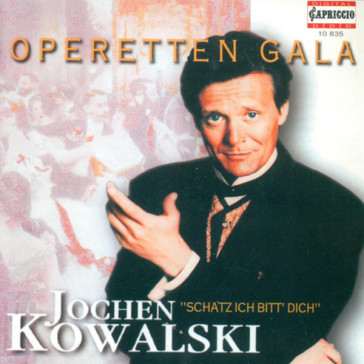 Because I had the pleasure – and honor – to put this program together for the Heilbronner forces, I got to have coffee with Mr. Kowalski in a fancy Berlin-Mitte café to discuss the titles and their background. I had seen Mr. Kowalski many times on stage, as Julius Caesar, Tancredi and Prince Orlofsky. And I had heard a great many things about him via a great many people, Dagmar Manzel among others. But I had never actually met him in person. What a delightful personality he his!

The most delightful thing about him is his profound interest and expertise in operetta history. After sitting down for the first cappuccino he gave me a CD of Russian operetta diva Claudia Novikova (1895-1968) who I did not really know. Nine tracks of glorious songs by Strauss, Offenbach and Suppé later I had to admit that she is one of the all-time greats, even if I cannot understand a word of what she sings. Her way of “laughing” through songs, such as “Song of the Laugh” from The Geisha (an addition to the Sidney Jones operetta by N. Lambelt), only has an equal in Oscar Denes using that technique in the famous Abraham recordings.

I checked out the CD by the label Eclectra and produced by William Skinner – “Made in the USA”! – immediately and wanted to order it as a Christmas present for all of my operetta friends, just to discover that the company is nowhere to be found via Google and the disc available on Amazon for an astronomical amount of money: 295 Euros! That’s a lot of money for an operetta recording. (Move over, Anna Netrebko, you might jokingly say.)

Luckily, some of the tracks can be found on YouTube.

Her Offenbach Périchole had been heard on various Offenbach collections; the “Ah, quell diner” is truly stunning. STUNNING! But duets such as the one from Streinikov’s Holopka are less familiar, yet worth knowing.

Just when I thought it couldn’t get much better with Mr. Kowalski, he gave me a program book of the Metropol-Theater 1958, celebrating 100 years of that theater’s history. The wealth of images found there is breathtaking. And the many stories Mr. Kowalski told – that he himself had been told by operetta people such as Camilla Spira over the years – were equally breathtaking.

If he tells only half of them in Heilbronn on January 5, the audience will be enthralled, surely.

And his rendition of Lincke’s “Glühwürmchen-Idyll” from Lysistrata and “Divanpüppchen” from Abraham’s Blume von Hawaii will only be two of many highlights of that concert. He has a unique voice and unique way of singing operetta. And isn’t “uniqueness” what all great operetta performances are about? (Including Joan Sutherland’s hilarious and one-of-a-kind Merry Widow.)

Listening to the various stories, and looking at the material Mr. Kowalski has collected over the years, I wonder why he doesn’t have a regular spot on the radio – or the Komische Oper – to discuss operetta? He is a superb Master of Ceremonies and an operetta institution, whose stories deserve wider circulation.

The Heilbronn concert will be repeated in October 2015 in Cologne. For more information on the concert, the soloists and the program, click here.