If you know your operetta history, you will be aware of the fact that Johann Strauss Jr. was the most famous Viennese composer of his time – but Offenbach’s operettas far outnumbered Strauss’ stage works in performances in Vienna. Or anywhere else, for that matter. Because Offenbach was so popular with the Viennese, the Strauss orchestra played the best tunes from the supposedly scandalous Offenbach shows as quadrilles. Here is a brand new disc with ten such quadrilles, composed by Strauss’ brother Josef Strauss (1827-1870). 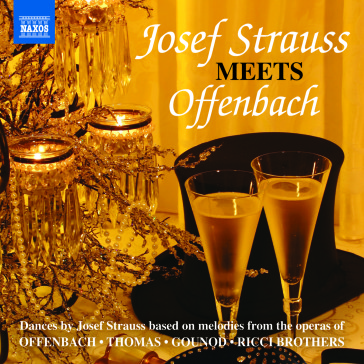 The father, Johann Strauss Senior, had actually intended Josef for the army, but he turned instead to architecture and engineering. Only in 1856 – seven years after his father’s death – did Josef embark on a musical career, urged by his brothers. As a composer and conductor in the family business his activity eventually curtailed to arrange the most suitable motifs of every Offenbach work into a quadrille, following its initial presentation on the Viennese stage.

The orchestral playing is good, but not exactly inspired. Still, it is fun to hear these tunes in such a snappy arrangement.

I especially enjoyed the quadrille with motifs from Barbe-bleue, because it’s interesting to experience the darker moments of that operetta in such a pop version – and be carried away by Offenbach’s genius. Because in these dance arrangements you truly realize how great the tunes actually are, taken for themselves.

A highly enjoyable way to start the new year!