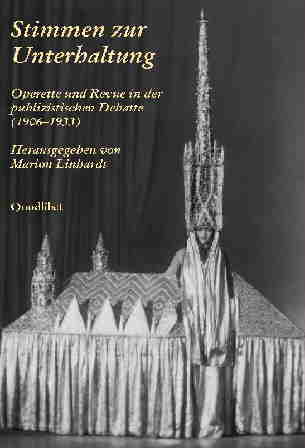 There are fundamental texts by Felix Salten (on Die Lustige Witwe as a modern and highly sensual form of operetta, “dripping with eroticism”, 1906), by Oscar Straus (“Operetten-Betrachtungen”, 1910), by Karl Kraus, Oscar Bie (“Die Operette”, 1914), Rudolf Oesterreicher, Alfred Rosenzweig, Louis Treumann (Lehár’s first Danilo!) and many many many others, giving highly opinionated, individual, always intelligent, pro and contra views on operetta and revue, an art form that must be seen in combination with operetta, certainly when we get to the 1920s. Though most texts deal with operetta as produced in Berlin and Vienna, or are imported from the United States to these cities, there is also an essay on “Operetta in America” by August Spanuth (1908), giving a detailed account of how operetta was performed on Broadway at the time – and how that performance tradition differs radically from the one found in Vienna.

He claims that the Puritan Americans would never tolerate the sexual liberties that could be seen in European operetta, and we are talking of the year 1908.

The book also offers an introduction by Marion Linhardt (born 1967), who is one of the new voices in the universe of operetta research and one of the few women busy in this field. Much of what she writes is essential reading and offers clear and well-researched opinions on operetta. She describes how operetta developed towards ‘comic opera’ and ‘nostalgia’ on the one hand, and ‘modern’, ‘big city’ entertainment on the other, incorporating elements of vaudeville, burlesque and revue (using modern dance rhythms like Cake Walk from there). She also points out – rightly – that ‘Modern Operettas’ like the Lustige Witwe and the works of Kálmán, Leo Fall. Gilbert etc. cannot be properly performed by opera companies as ‘mini operas’. I.e. they do not work in the system of present day opera houses performing operetta.

Linhardt also mentions the “transatlantic aspect” of Viennese and Berlin operetta (without dealing with some of the newer publications on that topic) and also talks about the sexual side of operetta. In her interpretation, sex (“die Erotisierung der Operette”) became an essential part of operetta after Die Lustige Witwe in 1905. Some of the texts quoted in the book seem to support that judgement. Though it might be true from the perspective of the early 1900 that Lehár and Leon re-introduced sex to operetta, after the many ‘folklore’ and ‘opera style’ operettas from the late 19th century (Vogelhändler, Zigeunerbaron et al), Linhardt completely ignores the fact that Offenbach’s Parisian operettas were full of sex – she would only have to read Emile Zola’s Nana to hear all about it (a novel whose main character is partly based on Offenbach’s prima donna Hortense Schneider, giving a description in the first chapter of an operetta premiere in Paris that is clearly meant to be that of La belle Helene and downright pornographic.)

Also, the works of Audran & Co. are pure sex, as Kurt Gänzl has pointed out in various of his publications, which strangely are also not quoted in the extensive footnotes.

It seems Linhardt has not read Gänzls books on operetta, dealing only with Richard Traubner’s somewhat problematic ‘old fashioned’ view of the genre, when citing English or American publications.

Still, this Stimmen zur Unterhaltung-book is an essential publication, even if some important texts are missing in the collection (like Victor Léon’s “Bittere Operettenwahrheiten”) – but it is probably never possible to include everything. So perhaps a highly desirable 2nd volume will offer more, in the future.

Linhardt is also the author of a ground breaking study on Viennese Operetta. It is called Residenzstadt und Metropole. Zu einer kulturellen Topographie des Wiener Unterhaltungstheaters (1858-1918). She describes how Offenbach’s works came to Vienna in the 1860s, where they were performed, for whom, by whom and how… it turns out that the audience of these early operettas was a highly exclusive one, rich upper class – like in Paris. People (mostly male) who wanted to see girls, as ‘nude’ as possible, and operettas, as ‘frivolous’ as possible. (Like in Paris.) Linhardt goes on to describe how this ‘original’ form of operetta turned into something else in the late 19th century when the audience changed and became more middle class, more conservative, more moralistic.

She also offers a clear distinction between the “Operetta der Metropole Wien”, i.e. the cosmopolitan operetta à la Merry Widow, for big city viewers, and contrasts this with the “Operette der Residenzstadt Wien”, a nostalgic form of operetta for an (provincial) audience longing for ‘the good old times’ of waltzes and Johann Strauss, re-interpreting the latter as a ‘nostalgic’ composer which he originally certainly was not.

(Linhardt does not deal with the Nazi aspect that is relevant here, because – of course – the Nazis took the “Residenzstadt”-model and made it the exclusive form of operetta after 1933. Even turning avant-garde works like the often quoted Lustige Witwe from a “Metropole” operetta into a “Residenzstadt” operetta, a re-interpretation that, tragically, has not been set straight again.)

As in the intro to her Stimmen der Unterhaltung-book, Linhardt again states that only after Die lustige Witwe operetta became ‘sexual’. In the context of this Vienna-book such a statement is even more surprising since Linhardt actually describes the early Offenbach-performances in night club-kind of theaters where men went to meet girls from the stage. And where shows had titles like 10 Mädchen und kein Mann (“10 girls and no man”, by Franz von Suppè).

Whatever the quibbles, Linhardt’s research about the theaters that played operetta in Vienna, the audience and the changes in audience are thrilling and ground breaking. It sets the whole discussion of what operetta is on new ground – disproving the often heard statement that operetta is “low brow entertainment for the poor”. At least in its original form nothing could be more untrue.

Sadly, the latter book is extremely expensive (84 Euros) and contains few pictures. Given the topic – old fashioned operetta vs. avantgarde operetta – it would be nice to have an edition which lets us see what these shows and performers and theaters looked like. Also, an English language version of this book would be welcome, perhaps with some University Press?

In any case, three cheers to Linhardt for these books. Anyone capable of reading German and interested in operetta will have to get them. Full Stop. Something that cannot be said of many books dealing with operetta… (So, an extra cheer for that.)