Why Fred Raymond’s Maske in Blau (1937) is so popular right now, is anyone’s guess. But the show that contains hits like “Die Julischka aus Buda-Budapest” and the rousing “Sassa” is being staged at various venues this year and next. One venue is the “Schönebecker Operettensommer” in Saxony-Anhalt, Germany. It is situated on the left bank of the Elbe, nine miles southeast of Magdeburg. There, a production by Thomas Enzinger premiered on June 28, it will run though till July 27. Performances are Wednesdays till Sundays, at 4 p.m. at the open air theater Bierer Berg. 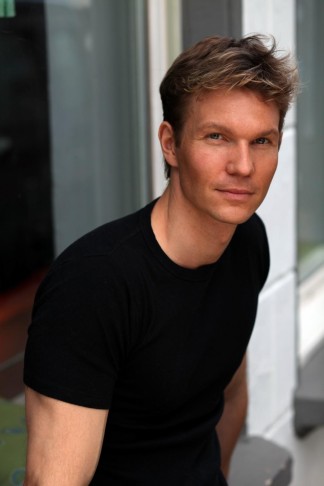 What makes this staging particularly interesting, and a visit to Saxony-Anhalt worthwhile, is the fact that musical comedy star Uli Scherbel has been cast as the “buffo” Josef Frauenhofer. You might remember Scherbel from the Musikalische Komödie Leipzig where he played – and tap danced – in Gershwin’s Crazy for You. He is also the star of the large-scale Stage Entertainment production Ich war noch niemals in New York. To have him take on a “real” operetta role is thrilling. The genre certainly needs young and energetic (and good-looking) performers such as Scherbel, who can act and dance and sing.

Let’s hope this casting idea is a cue for others to try out brilliant musical stars for operetta titles, too, and breathe some new life into shows such as Maske in Blau.

Even though Bernard Grün doesn’t have many positive things to say about Raymond or the show in his Kulturgeschichte der Operette, calling the composer a “copycat” who used the new political situation in Germany after 1933 to continue the tradition of Abraham and Benatzky (both in exile) by re-writing their now forbidden shows. Maske in Blau can certainly be interpreted as an “answer” to Abraham’s Ball im Savoy – with the wild “degenerate” elements taken out, and the heroine returning to house and kitchen at the end of the adventure. Just like a good German Hausfrau is supposed to do. (We shall refrain from further ideological comment here.)

Check the show out for yourself in Schönebeck. It is worthwhile to start the discussion about the worth (or non-worth) of post-1933 operettas again. And to also ask why many of them have remained popular for decades, while others have been completely forgotten.