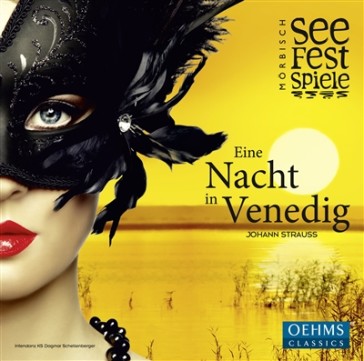 Cover of the cast album “Eine Nacht in Venedig” from Mörbisch, 2015.

With all of these good and really good recordings out there, and with a recent version from Sweden (Naxos) as a strangely double-cast curiosity, the only thing missing on disc is a full recording of the original 1883 Berlin version that premiered at the Neues Friedrich-Wilhelmstädtische Theater. Just because it was a flop – due to many reasons that have little to do with the actual score – no one has touched it since. Instead, there are “Bearbeitungen” without end. The most famous is the 1923 Korngold version which in turn is the basis for almost all classic Nacht in Venedig discs. The most convincing, for me, is the aforementioned Ackermann recording which has Nicolai Gedda singing the Korngold extra “Sei mir gegrüßt du holdes Venezia” in an unsurpassed way. Plus, there’s one of the best “Alle maskiert” waltz ensembles on disc that I have ever heard. The Nazis in 1938 knew how to make that number take off too, but the sound quality – and underlying ideology – is somewhat problematic. mildly put.

Obviously, Mörbisch is not the place from where ground-breaking original editions of Strauss operettas are likely to come. That was true for the last cast album from Neusiedler See, and it’s true for this new one as well. It offers an expanded score, with many old and new favorites added, and some new lines in the text to make it fit the new story of the operetta now playing on a gigantic ocean steamer. Here, the Duke of Urbino is the captain of a ship called “Herzog von Urbino.” Think Love Boat Meets Operetta. It’s actually fun to listen too, for the most part. 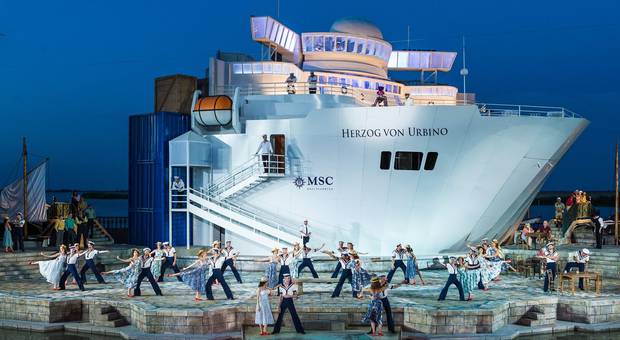 The acoustics are very dry, which you will notice mostly during the rather joyless overture. The Mörbisch orchestra is conducted by Andreas Schüller who brings out some interesting colors and details in the score, but who is not someone who knows how to have “fun” with Strauss. That was already evident recently when he conducted the disasterous Cagliostro in Wien at the Staatsoperette Dresden, and it is apparent here too. E.g. the catchy “Alle maskiert” in Schüller’s version doesn’t even come close to the bounce Ackermann created, there is no sense of boundless energy and uplifting waltz rhythms; only dutifully executed um-pha-pha. By coincidence I received another CD published by OEHMS in the same parcel, and that had Columbian Andrés Orozco-Estrada conduct the Viennese Tonkünstler-Orchester with Mendelssohn’s Italian Symphony.

The joyous drive and opulent boom of that recording are things completely missing on the Mörbisch disc, orchestrally speaking. And Mendelssohn’s saltarellos have a knock-out quality under Orozco-Estrada’s direction that Strauss should have too, especially in the overture. But Schüller is not a knock-out conductor, it seems.

As for the soloists, they are good, but rarely outstanding. It’s not so much a question of not possessing better voices than others on the older sets, but they seem to be too concerned with producing a “big” sound, especially Annika Gerhards as Annina and Barbara Pöltl as Ciboletta. Their voices record well, and they produce some lovely (extra top) notes, but they never sound playful or linguistically flexible. Certainly not in the way Schwarzkopf’s Annina jumps right off the page and into your heart. Often I felt the two new ladies were mistaking Eine Nacht in Venedig for Der Freischütz, where they’d be a perfect Agathe/Ännchen team. Of course, Schwarzkopf was also a great Agathe, but she doesn’t try to sound like one on her operetta discs. 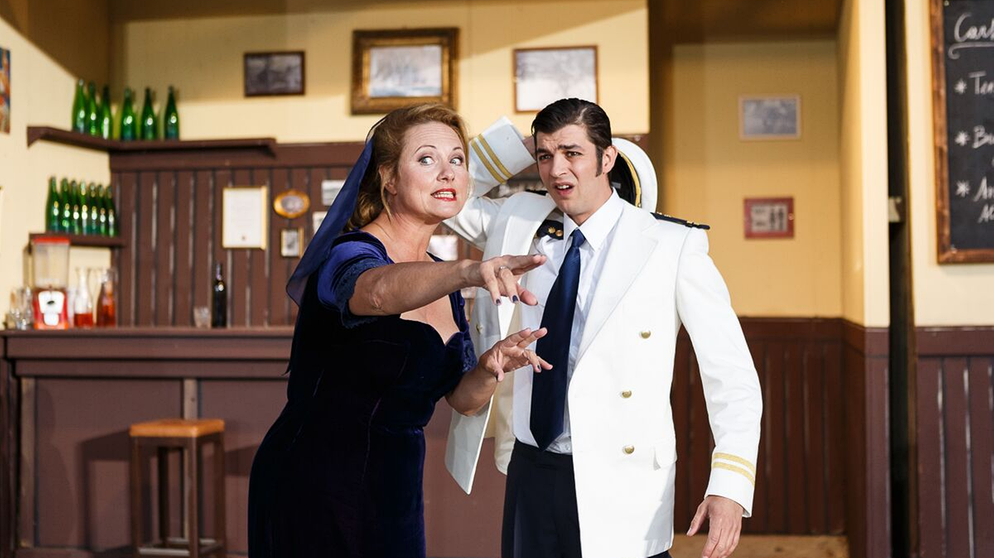 Herbert Lippert as the captain get’s to sing “Sei mir gegrüßt” with dazzling orchestral accompaniment, but not quite so dazzling top notes and quite a bit of stress in getting those arching vocal lines (written for Tauber originally) right. He’s lacking that sweet seduction tenors like Tauber or Gedda brought to the role, but he works well enough on stage, judging by the photos and video clips. Veteran Heinz Zednik is a “characterful” no-voice-left Senator Delaqua, who is enjoyable in his short scenes on the disc. 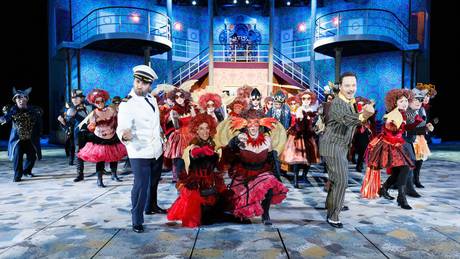 Scene from the 2015 “Eine Nacht in Venedig.” (Photo: Seefestpiele Mörbisch)

But my personal highlight on this CD is an early scene between Barbara and her lover Enrico, a ship steward. The young cabaretier Otto Jaus is one of the few participants of this operetta cruise who does not try to out-sing the others, but who has a slender comedy voice of great flexibility that works well on disc and on the ear. His partner in the newly written seduction scene is Dagmar Schellenberger – Mörbisch’s intendant – who turns Barbara into a much older lusty lady than usual, making the most of her vocal contrast with Mr. Jaus. Their duet “Komm in meine Arme” (originally from Cagliostro) is hilarious and well acted, vocally. She sings of him: “Ach, wenn man so schön und jung” (= Ah, if you’re so beautiful and young). And he turns her into the “MILF of the Year” by carrying her off below deck.

If you like your Nacht in Venedig sung “grand” this is definitely a recording for you. It is far superior to the recent Stockholm version, and obviously of better sound quality than the various historical treasures. What’s astonishing is the great stylistic unity not often found in modern-day operetta recordings. And: excellent natural German diction. I mention this because in some of the recent Bad Ischl recordings you wondered why singers were used for Viennese operettas that cannot master the German language. No such problems here.

The Austrian TV transmitted the production recently, so there is a chance that there will also be a DVD release sometime soon. The dry acoustics might not be such a problem then, and seeing Schellenberger/Jaus in full swing falling over each other will almost certainly be worth getting that version too.

If you want to learn more about the various Mörbisch productions of Eine Nacht in Venedig in the past, we recommend Hans-Dieter Roser’s illuminating essay.