Tuesday and Wednesday in Berlin were exasperating for me. A combination of misunderstandings, bad directions, getting lost, buying a theatre ticket for the wrong date etc., all combined to put me in an ill humor, and no one was around to enjoy it but me. The only silver lining in all this was the performance Tuesday night of Nico Dostal’s Clivia at the Komische Oper. 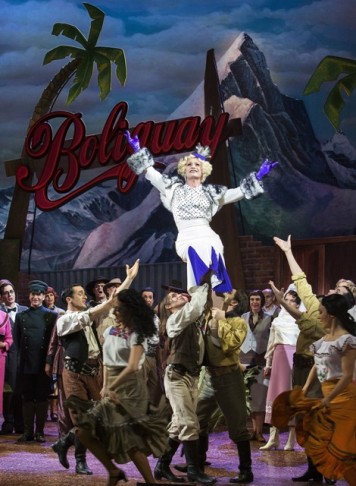 It is a bizarre, often amusing, sometimes stupefying 1933 musical comedy starring Christoph Marti in drag. He thinks he’s Joan Crawford, but looks more like Betty Grable, and has a deep voice like Zarah Leander. Charles Busch should study this guy.

The story follows an American businessman (W. W. Potterton, played by Stefan Kurt) trying to overthrow the government of a small South American country named Boliguay. Under the pretext of making a film starring an oblivious diva Clivia Gray (the afore-mentioned Christoph Marti), Potterton attempts to bribe his cronies and plot a coup. Having been denied the necessary work permits, Potterton persuades Clivia to marry a Boliguayan named Juan Damigo (the fabulous Tobias Bonn, real-life husband of Mr. Marti), who just happens to be the rebel leader in disguise. Unexpectedly, Juan and Clivia genuinely fall for each other. After the coup fails, Juan and Clivia both think they’ve been duped, but true love triumphs in the end, and the American film star marries the new president of Boliguay. (I won’t even explain the supporting characters: Gustav Kasulke (Christoph Späth) who plays a hapless German inventor of a sleep machine called “Snooze-well”; Juan’s cousin Yola who commands the revolutionary guards — a gun-toting female chorus dressed in turquoise; Lelio Down, an American gossip reporter for the Chicago Times, who falls for Yola. Need I continue???)

I know all this sounds like utter rubbish, and indeed it was, but hardly much different from the war over Swiss cheese that drives Strike Up The Band, or the books to Something For The Boys, Over Here! or Panama Hattie. The political plots of Of Thee I Sing and Pardon My English are far more clever. Clivia plays like a Hasty Pudding Show. At the very start the proscenium and stage present a generic set for any Latin-American musical comedy story, inevitable opening number, and then cut! It’s all a movie. Stupid plot and forgettable songs follow. The real problem is that the score is ordinary yet pleasant, the lyrics inane or insipid from what I could tell of the English translations, and the acting stock musical comedy.

But then …….. a musical comedy orgasm unexpectedly happens …….

Potterton starts to take off his clothes (Komische Oper always has men taking off their clothes, in this case you wish he wouldn’t) and change into a tuxedo onstage, The set unexpectedly revolves 180°, the entire dance band orchestra re-appears on a giant raked turntable, the colors turn day-glow irridescent, and Clivia morphs into a 20th Century Fox 1940s Latin-American Hollywood musical.

But it’s not just simply the set, but the entire production concept kicks into high gear as a break-neck farce. I don’t mean to suggest for a moment that Clivia is any good as a musical, but it inexplicably becomes good fun. The chromatic production colors, the turntable set changes, the sight gags and props, it all plays like some drug-induced Hollywood musical comedy fantasy, happy dust in the air.

To give you an idea, the production reaches its apotheosis: Clivia, disappointed in her Latin lover, despairs in song while lounging in a fountain of dry ice, caressing two statues of giant white swans. It was so absurdly, deliberately funny that the typically quiet Berlin audience was tittering, then screaming with laughter. Clivia’s vibrato wobbled even as the flesh on her arms wobbled. In a program interview director Stefan Huber and Christoph Marti mention Jean Harlow and Holiday On Ice as their inspiration.

From then on “Clivia” could do no wrong. I have never before seen a standing ovation in Berlin, standard though it may be on Broadway, but remarkable here.

(If I fail to mention songs by title, it’s that they are not listed in KO programs and I’m not certain of the titles.) The Komische Oper have offered Clivia as a pre-Nazi operette but in fact its December 1933 premiere was ten months after the Nazi takeover. But its embrace of overt sexuality, Hollywood iconography, American dance band jazz, and its military coup plot did not endear it to Berlin authorities. So that’s Clivia at the Komische Oper, a guilty pleasure, probably never to be seen or heard again.