Nathan Lane gives a polished, multifaceted performance as a fictitious 1930s burlesque performer named Chauncey Miles. He plays what was known as the “nance” character (that is, the exaggeratedly effeminate man). 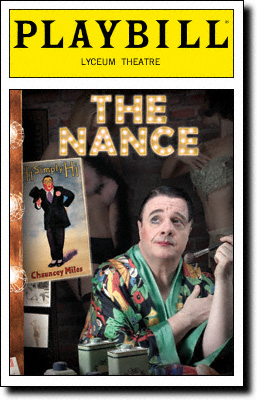 The twist in Douglas Carte Beane’s story is that Chauncey, unlike most actual vaudeville nances, really is gay, and in the repressive, anti-homosexual climate of Depression-era New York, those on-stage and off-stage personas are fated to come into collision, and thus provide the core of the play’s conflict.

In the play’s strongest scene, albeit a little exposition heavy, we see Chauncey furtively picking up Ned (Jonny Orsini) a naive young man from Buffalo at a Greenwich Village Automat. Secrecy is essential as the police vigilantly stake out the place for gay assignations.

It turns out that Ned has been married, but left his wife to pursue his true leanings. Ned moves in with Chauncey (a first for the performer who has only known a series of one-night stands) and, in short order, becomes immersed in Chauncey’s world of comics and strippers at the Irving Place Theatre, even joining the company.

That world is coming to an end, though, as Mayor LaGuardia is cracking down on the burlesque houses, and paying particular scrutiny to the nances.

Beane’s play has something of the feel of John Osborne’s tacky English Music Hall setting in “The Entertainer,” and Lane certainly has proven himself our homegrown Laurence Olivier. But though the play gives him plenty of scope for humor and heartbreak, his character is intentionally more unpleasant than lovable as Chauncey is filled with self-loathing, refuses to accept the changes clearly coming, and eschews the monogamous relationship that faithful Ned wishes to have.

The play could use some trimming, and some of the on-stage sketches are tedious, even as they vary the mood.

Still, director Jack O’Brien maintains a seamless flow between the onstage and backstage action. John Lee Beatty’s revolving sets (expertly lit by Japhy Weideman) smoothly evolve from one to the other, and vividly create the Thirties tacky showbiz ambiance, be it the Irving Place stage, Chauncey’s cluttered apartment, or the murky Automat. Costume design Ann Roth’s costumes are a continual period delight.