We need to talk about Offenbach, seriously and right now. Is it a sign of our gender-queer times that of all the possible operettas out there in the world it’s Offenbach’s 1868 mini opéra bouffe L’île de Tulipatan that gets a brand new recording – in English, for the first time ever, released on Albany Records, one of the bigger US-American CD labels, with a New York cast that performed the show as The Island of Tulipatan earlier this year? Just in case you are not aware of it: it’s a show about a ‘boy’ being brought up as a ‘girl’ by his parents, and a ‘girl’ being brought up as a ‘boy’ by hers. The teenagers fall in love because they see each other as a perfect match, to the horror of their respective parents who each only know half the truth and fear all of this could lead to a same-sex marriage. Which makes this 19th century piece as topical as can be in our times of discussions about marriage equality, gender (“My Daughter Is Not Transgender, She’s a Tomboy”), gender identity, gender discrimination, sexual orientation, intersectionality, triggers, safe spaces etc. Which, in turn, makes this CD release so important. Because it finally allows operetta-as-a-genre to be a full part of these discussions in the English speaking world. 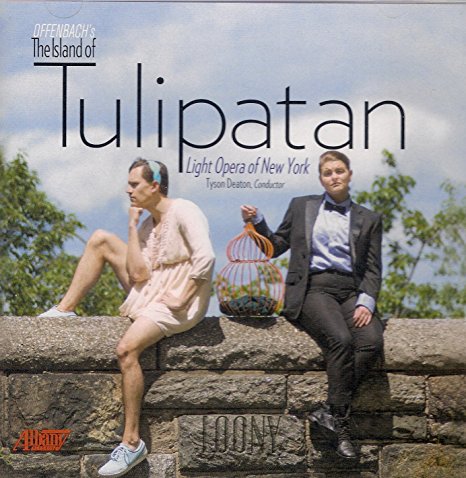 The new Albany Records version is based on a production by The Light Opera of New York (LOONY), based on a modern English translation by Gregg Opelka and Jack Helbig, created in 2003. The CD includes much of Helbig’s dialogue, making it easy to follow the all-important action which gets lost if you only listen to the music.

The hilarious story – set on a South Seas fantasy island where a mad Duke called Cacatois XXII rules – involves many over-the-top slapstick moments, musically as well as in the dialogue department. Here, we encounter a group of young singers who all possess attractive voices, but who are rarely character performers. For the young cross-dressed and gender-confused lovers Alexis/Alex (Claire Kuttler) and Hermosa/Herman (Tom Mulder) this might be okay, as a sign of their pubescent ‘innocence.’ But for the fathers, Cacatois (Victor Khodadad) and the equally crazed Grand Marshall Romboidal (Chad Kranak), and for Hermosa’s mother Théodorine (Heather Jones), more audible comedy – in vocal style, timbre, and acting – would have been essential. Also to make the age-relation between the characters clear, for example in the duet Hermosa/Romboidal in which Hermosa laughs off her father’s fear of having two girls getting married with a tralalalala what-do-I-care Tyrolienne. A highlight of the score, with essential nods at Halevy’s La Juive and the father/daughter duet between Éléazar and Rachel (minus the Tyrolienne in Halevy’s case – Offenbach blows up the pathos of grand opéra here, as elsewhere.) 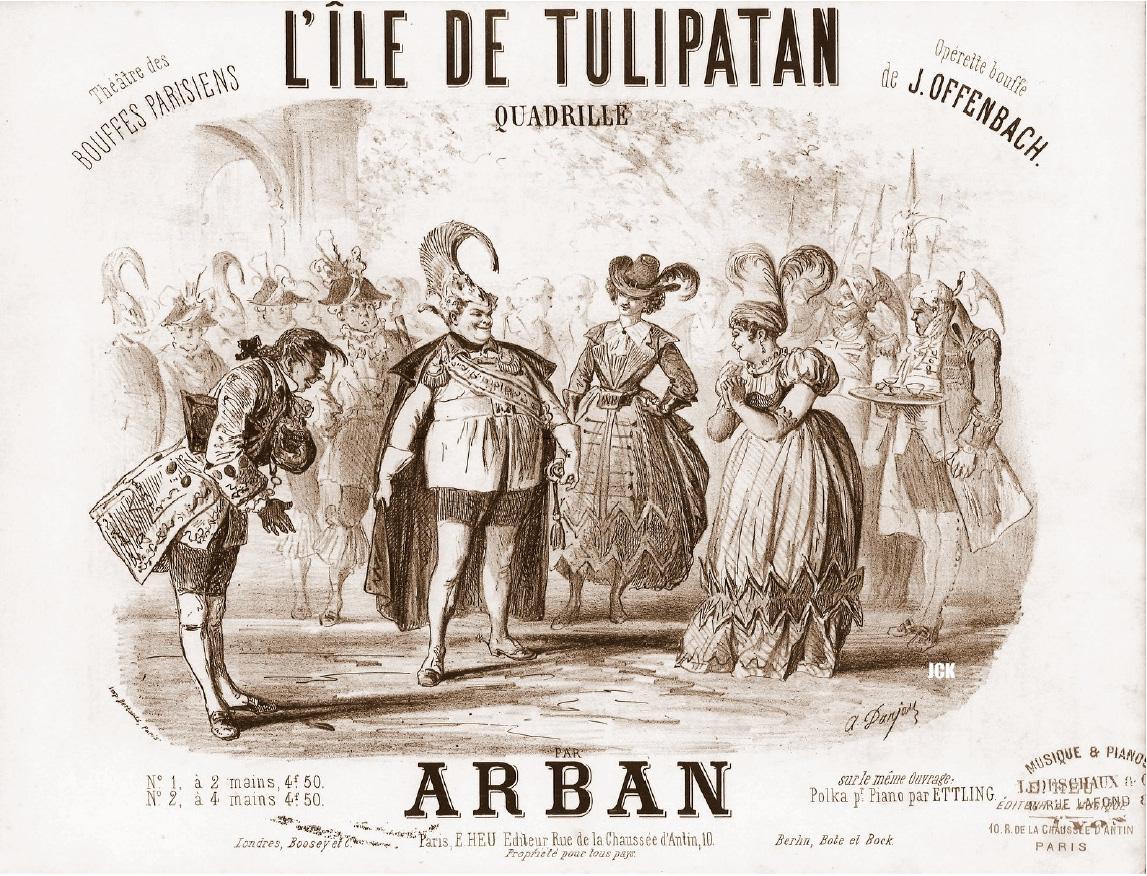 This doesn’t happen here. Noone goes for all-out comedy of vaudeville or burlesque dimensions. And noone blows anything up. For the most part, the performances are ‘classic’ and ‘restrained.’ These young artists in front of the microphone are no Broadway babies ready to unzipp, nor are they parody singers, instead they are aspiring opera people. Though, luckily, they never allow stilted opera singing to get in their way. They sound pleasantly natural. But if you consider how this show might sound with someone like Nathan Lane as Cacatois, Simon Helberg or Jim Parsons as Hermosa, or Kristen Chenoweth as Alexis, you understand the difference immediately. This is not that kind of recording. 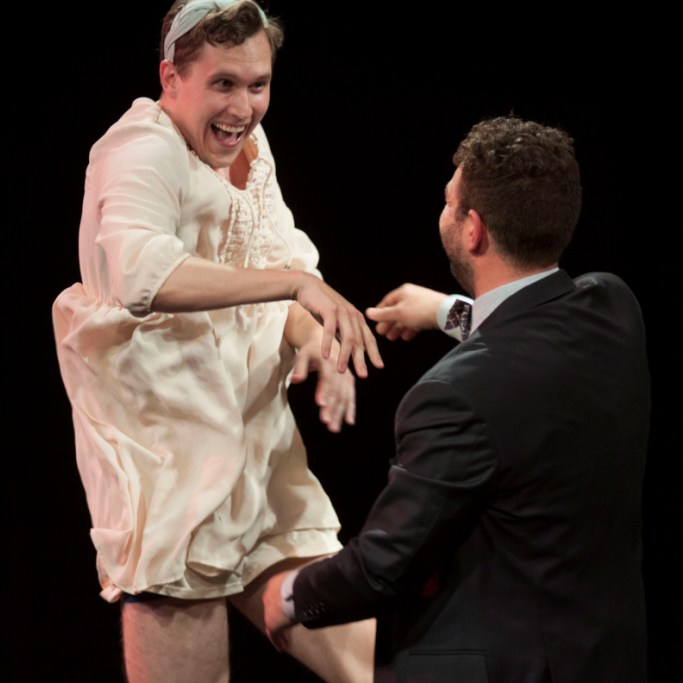 Considering the ongoing discussion about white cis-gendered people dominating the queer scene, it might also be noted that this gender-queer operetta is cast by LOONY with an all-white ensemble. I was wondering how the story might play out if the director had used an all-black cast for this South Seas fable: would this have been considered “racist” by the PoC community, or would they have welcomed the visibility of colored people in an important production such as this one? Or how would Tulipatan play out with an Asian cast, especially in times of “rocket man” Kim Jong-il as a mad leader comparable to Cacatois? Or can you imagine this plot set in a (historic or modern) Muslim society with veiled women and strikt gender rules? Considering Donald Trump’s current reign at the White House, even in a all-white version such as this one, there should have been more audible political satire in Tulipatan … Cacatois’s famous fake-news couplet practically begs for a salacious XXL format reading. Where is Randy Rainbow when you need him? He would make for excellent Offenbach singing in a show that could be straight out of Saturday Night Live.

After two 1950s German radio recordings of the full score (one with Anneliese Rothenberger as a gloriously sung Alexis), a French radio version from the same era, and a 1980s French highlights version with no dialogue, this is the first full English language edition – nearly 150 years after the world-premiere in Paris.

In 1868 the word “homosexual” was just being invented, before that people spoke of “sodomy.” The idea of same-sex marriage was a joke back then and was played out as such in Tulipatan. Still, it’s the first representation of that idea on the musical stage. As usual, Offenbach and his librettists were ahead of their time. In the meantime, the joke has turned into reality in many Western countries, and many of the gender topics included in Tulipatan – which were absolutely off the radar in times of Anneliese Rothenberger – have made the piece one of the most relevant from Offenbach’s entire oeuvre, at least from a 2017 perspective. (Sadly, neither Offenbach nor Tulipatan are included in the 2017 publication David Bowie Made Me Gay: 100 Years of LGBT Music by Darryl W. Bullock.)

If you are capable of using your imagination while listening to this new CD version, you will probably greatly enjoy it. Especially since the small orchestra conducted by Tyson Deaton sounds amazing: sharp, snappy, sexy.

Talking of orchestras: the Tulipatan overture is also included on a new CD released by Naxos with the Orchestre National de Lille conducted by Darrel Ang. It’s a very different sound experience, simply because the orchestra is so much bigger. While I enjoyed the smaller scale approach for Tulipatan a lot more, the way Ang handles the stretta of the overture is in a class of its own, it’s breathtaking and truly arousing. (Which Deaton and his LOONY forces are not.)

Let’s hope that all this new Offenbach on CD is a herald of what might still follow till 2019, the 200th birthday of the composer. A release such as this Albany Records’ Island of Tulipatan does make one of Offenbach’s most ground-breaking one-act operettas available to a whole new generation of performers who might dig their teeth into the piece themselves in the future. And release new recordings themselves.

Till then, this Island of Tulipatan is one of the most important operetta CD releases of the year, and a must-buy for anyone interested in the genre and its potential significance for a modern-day audience.

Thank you, LOONY and Albany Records! (Both recordings discussed here can also be heard on Spotify.)