The Operette für zwei schwule Tenöre by composer Florian Ludewig and text author Johannes Kram is back in Berlin for a second series of en-suite performances. With a slightly altered cast, but again scheduled at BKA Theater for a three week run. Which indicates: it is possible to write a modern-day operetta and be successful with it. So successful, in fact, that two further performance blocks are planned at BKA for 2022. Whether productions elsewhere will follow or whether this Berlin production will tour, in between, remains to be seen. 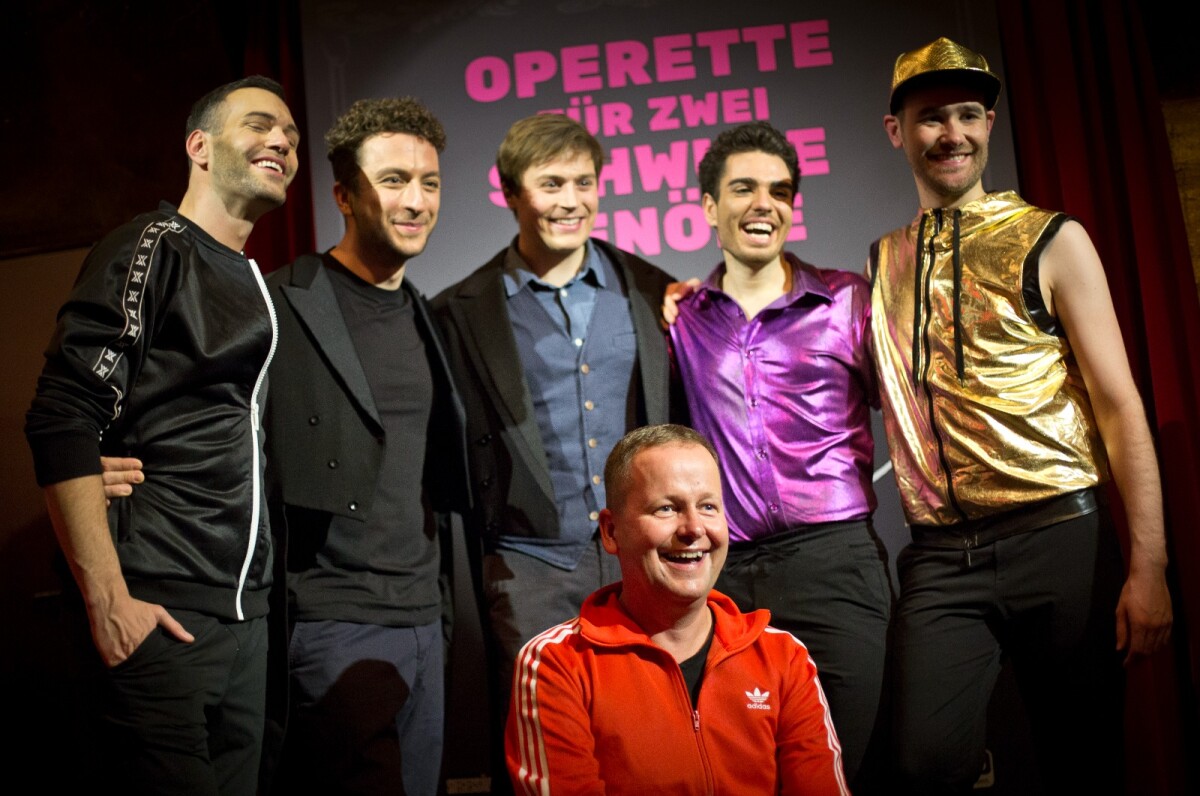 After the much-tooted world-premiere in October 2021, the reappearance at BKA was again celebrated by a lot of prominent guests on opening night, among them Berlin’s Senator for Culture, Klaus Lederer. Not only did he clap enthusiastically at the end of the performance, he also tweeted about it with enthusiasm on his official Twitter account.

New to the production is Christian Miebach as Tobi, the “tenor” who moves from the big city to the country to experience a “different” life of harmony with the bees, the trees, his candles and honey, and with Jan (played by Felix Heller) who can’t wait to get away from rural Germany and move to Berlin. The story of these two contrasting characters and their very different needs is the center of the effective piece. Between the catchy – often consciously cheesy – musical numbers the two tenors each have monologues analyzing their situation and the development of their rocky relationship. 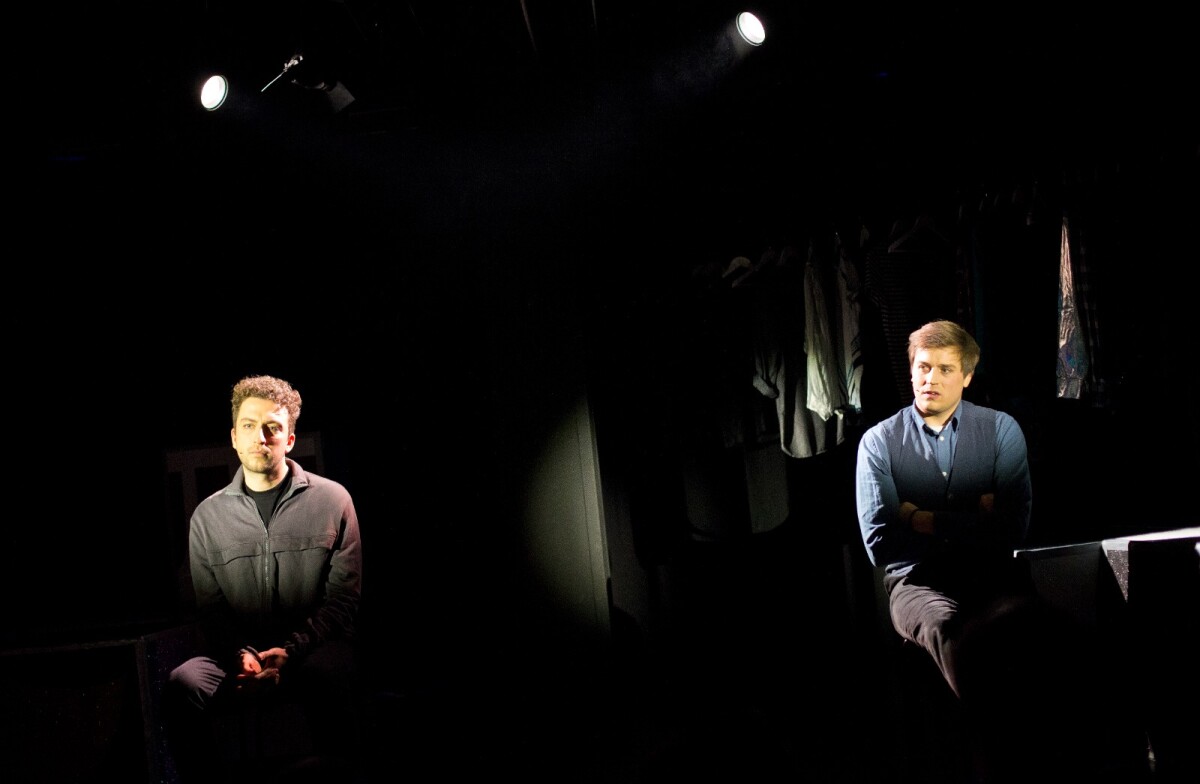 Telling the story only via songs and monologues is an interesting concept, that works well. Because it allows for a lot of introspection. And it brutally puts the different perspectives next to each other, from which a lot of the comedy arises. But also many of the touching moments, culminating in the hit song “Ein Liebeslied von Mann zu Mann”.

It’s helpful that Johannes Kram is a political activist and infuses these monologues with critical comments on society regarding homophobia, he also cleverly examining the inner workings of the queer community itself, showing how “we” treat one another in ways that could use a little more “operetta politeness”. Which leads, in the end, to both characters declaring their wish for an operetta happy-end, even if it seems highly unrealistic. 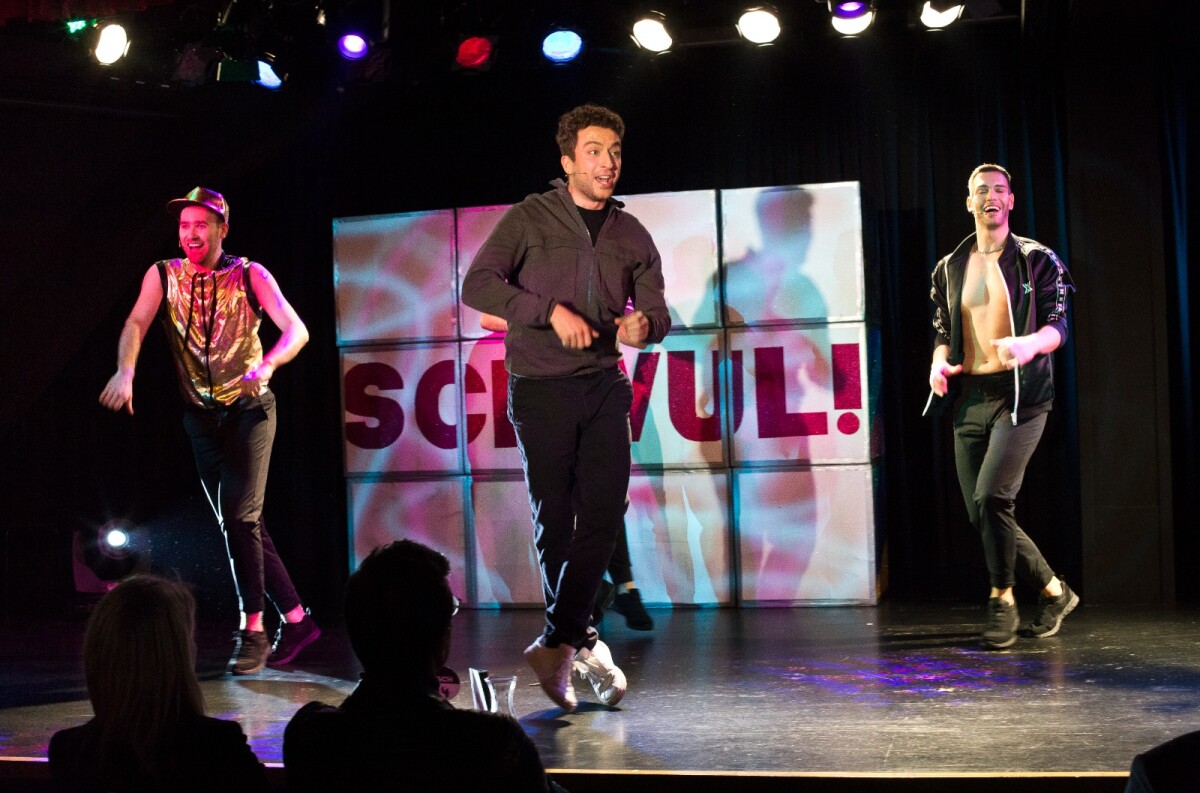 On the cover of the recent Young Adult novel Date Me, Bryson Keller the publishers say: “Author Kevin van Whye is writing books that give his characters the happy rom-com endings they deserve”. Mr. Kram, in turn, gives Jan and Tobi the happy rom-com ending they deserve. But he doesn’t do it un-reflected. And that kind of intellectual twist is exactly what “operetta” has always been about. It’s also great to have such a rom-com story with adult characters – singing about the joys (and horrors) of anal sex, and not leave the field to people like van Whye who writes about super-cute 17 year olds and their coming-out problems. (As heart-warming as that can be.) 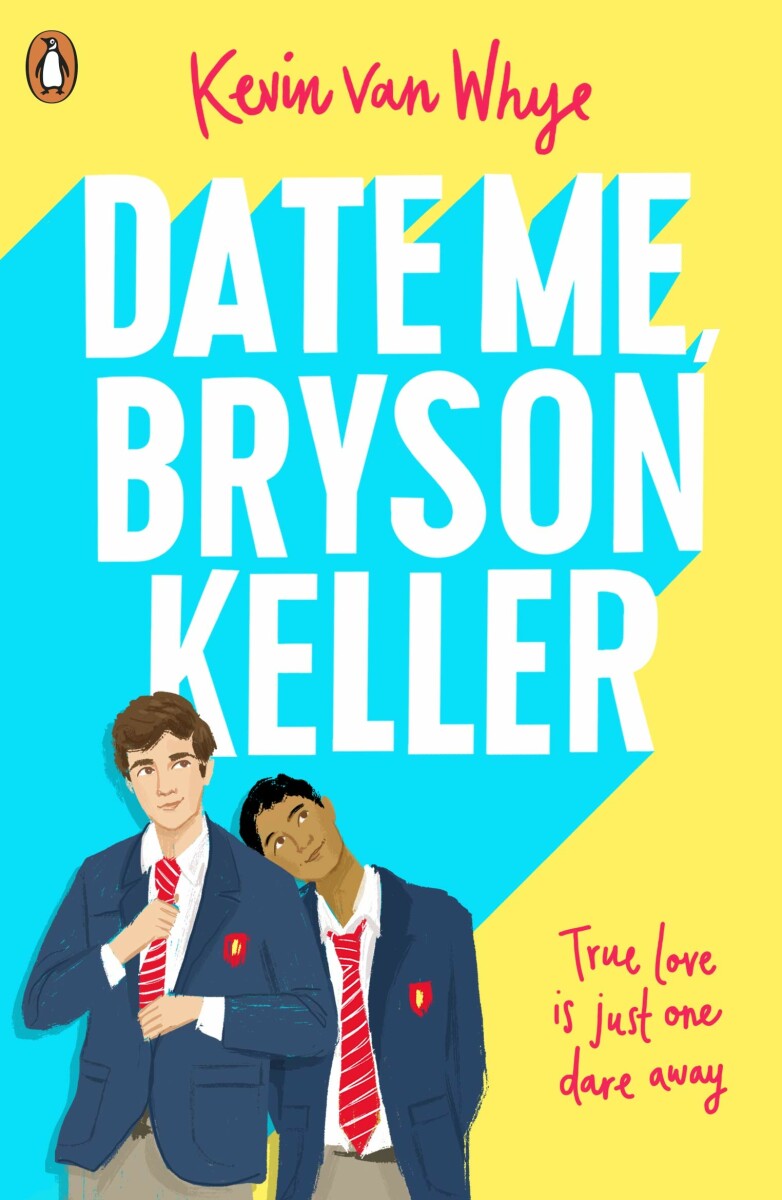 The cover for the YA-novel “Date Me, Bryson Keller” by Kevin van Whye. (Photo: Penguin Publishing)

Mr. Kram says to the Operetta Research Center: “For the first round of performances, there were many members of the community who came to see our show. Many already knew about our project from various concert performances over the years. This second round, now, is important to find out what pulling power the show really has and who it can reach. We’ve noticed that a lot of people who liked it the first-time round are coming back with friends and relatives, or that they’ve told their neighbors about it. It’s something we hoped would happen: our audience relects the community in its broadest sense, from very old to very young. But it’s also a heterosexual audience, because the show explains things to them that they often don’t see or can’t see. At the same time, this is not an educational work of art, it’s an evening of fun.” 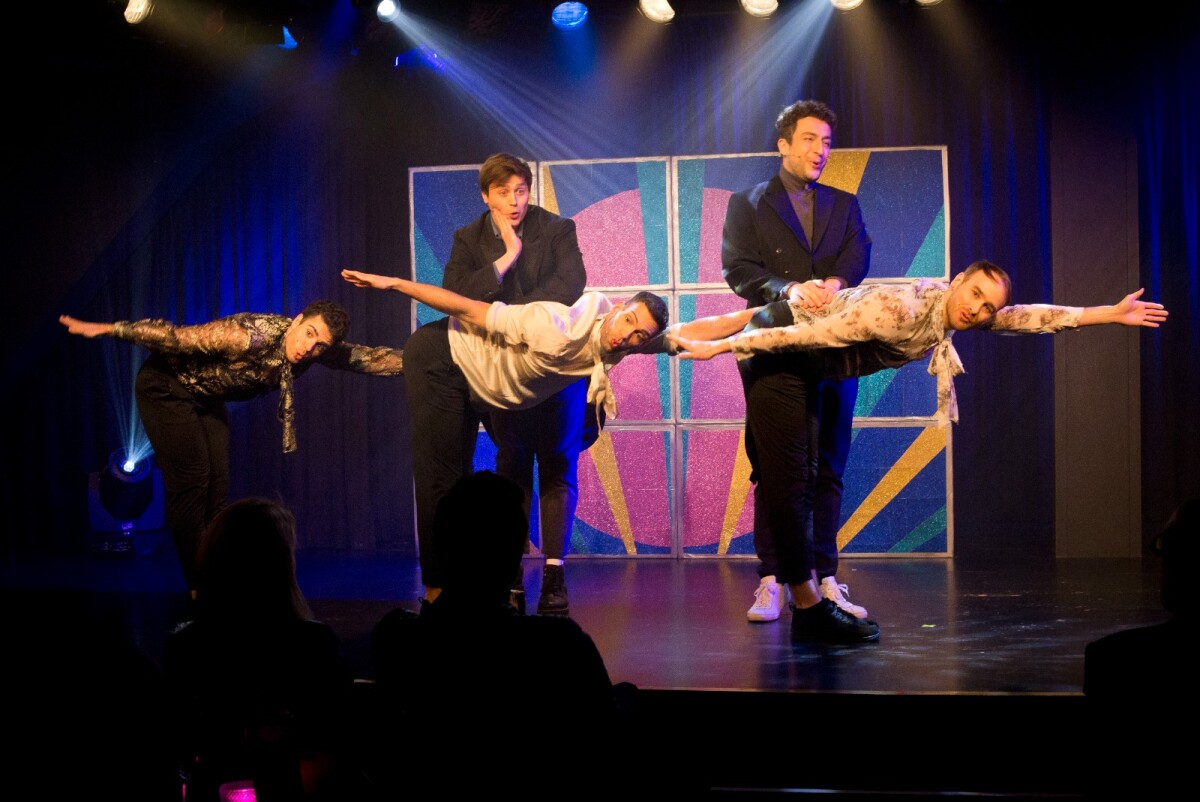 The fun is embodied by the awe-inspiring Felix Heller who tosses off the role of “country boy” Jan with such bravura and easy charm that it’s a miracle to behold. His monologue about “push and pull” at the gym is hilarious, especially when he applies that metaphor to real life – and relationships.

Next to him, newcomer Christian Miebach as replacement for Ricardo Frenzel Baudisch was still struggling with his character on opening night. Mr. Miebach is also very charming and a wonderful singer, but the chemistry between him and Mr. Heller doesn’t fully work yet. That said: they have three weeks to set that problem straight, if “straight” is the right word to use here.

Knowing Mr. Miebach from other productions, where he’s demonstrated what a fantastic actor he is (for example playing Max Hansen), I’m sure the two performers will get the balance right soon enough. Which makes it’s worth seeing them again, just to check. 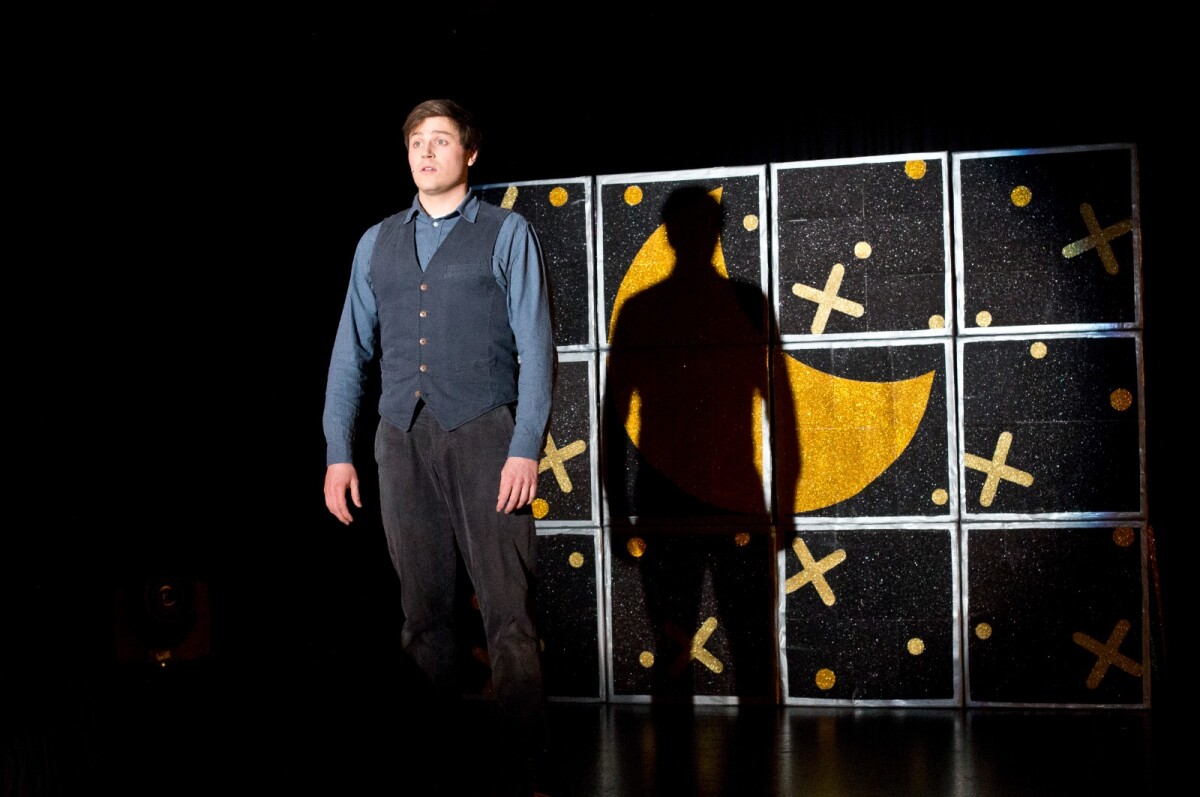 Heller and Miebach are surrounded by a chorus/ballet of three, performed over-enthusiastically by Tim Grimme, Tom Olcay and Torben Rose. This overenthusiasm can be a bit disturbing at times, but it ultimately adds to the crazy flavor of the production, the madness, and the rom-com turned upside down. And the dancers certainly inject great energy into proceedings (choreograhphy by Michael Heller).

If Operette für zwei schwule Tenöre gets produced elsewhere with a different cast, it would be interesting to see Tobi and Jan with more contrasting actors in terms of age, body shape, attractiveness … whatever. After all, the show is about opposites that attract, and about fetishes. 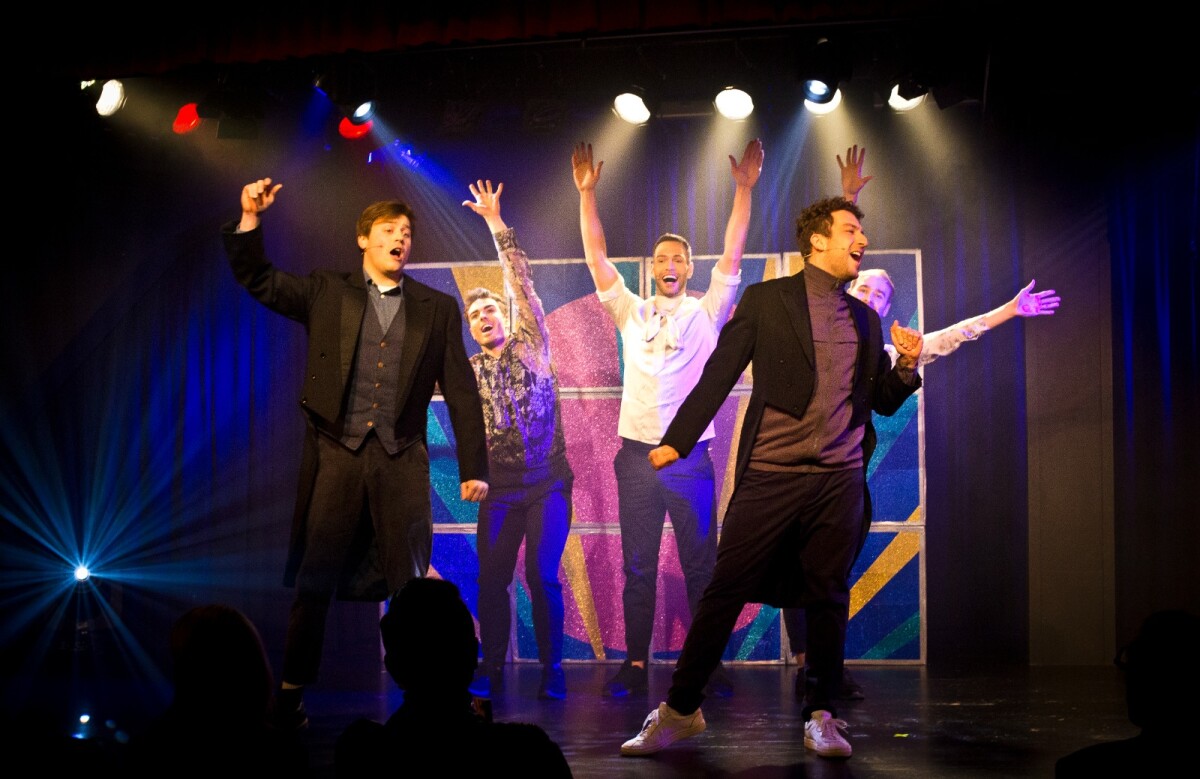 To quote Mr. Kram once more, from an interview he gave us: “I’ve been criticized again and again for pointing out the homophobia of comedians such as Dieter Nuhr and Bully Herbig who make fun – in an old-fashioned way – of gays. It was often interpreted as if I wouldn’t want anyone to joke about gay and lesbian life. But that’s not true. Of course one can and should do that. And everyone is allowed to play with clichés. But it’s something very different whether you laugh about something or whether you ridicule it.” The audience at BKA is laughing – night after night – with two gay guys.

And just as a postscriptum: it’s high time that a cast album came out!