It’s a historic document, of a special kind: when the Deutsche Oper Berlin was the only opera company in good old West-Berlin pre-fall-of-the-wall, and Götz Friedrich was still the all-powerful director of the flagship company, they had some truly splashy productions. All star casts, all the stops pulled out. Offenbach’s Orpheus in the Underworld of 1984 was one such production, staged my Mr. Friedrich himself on the giant stage of his house – consciously conceived as an ironic sidekick to the big Wagner productions he was staging at the same time. 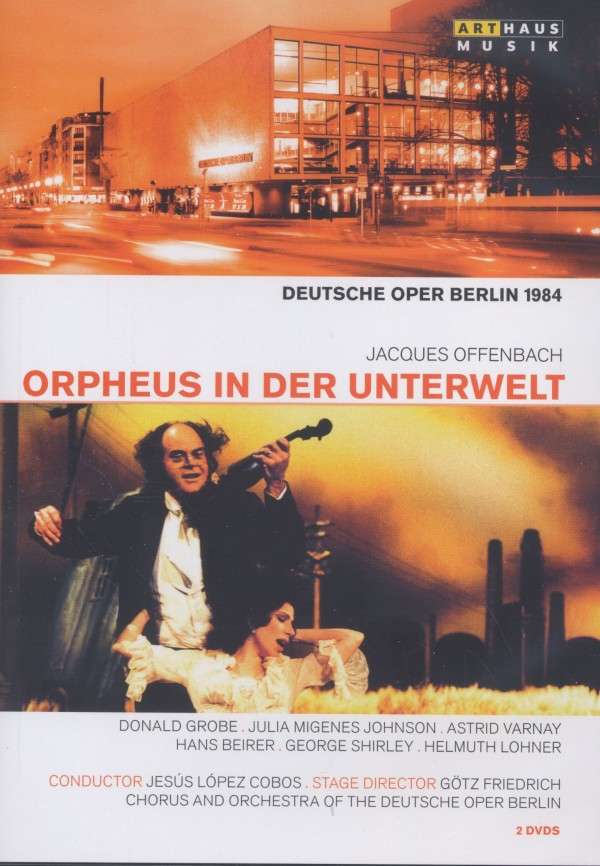 So, here, the Olympian gods are living in a sort of Walhall, and they are cast with two of the most famous Wagner singers of the post-war period: Astrid Varnay and Hans Beirer as Juno and Jupiter, the ever-quarelling couple high up in the skies. Throw in Janis Martin (who was, then, an ensemble member of the DOB) and you are in true Wagnerian heaven. What’s great about all three of them is that they are truly funny, because they are true stage personalities and true character actors. A joy to watch, even after 30 years.

I actually sat in the first night performance of this production. What I liked about it then – apart from casting the magnificent Mona Seefried (yes, daughter of…) as the Public Opinion and Julia Migenes as a very lusty Eurydice – was the fact that the DOB opted for the grander revue version Offenbach later wrote, i. e. there are loads of ballets and extra musical bits, that are very befitting for a large scale production in an oversized house like the DOB.

The conductor was the then musical director of the DOB, Jesus Lopez Cobos. He might not be the most natural Offenbach advocate, but he moves matters along nicely. (And with a cast like this, what can go wrong?)

Okay, it’s very possible that I enjoyed this DVD a lot more than usual because it brought back so many happy memories. It’s certainly no “authentic” Offenbach. But then: what is? But it’s a great night of high camp operetta with some now nearly forgotten superstars (Donald Grobe as Orpheus, George Shirley as Pluto, Peter Maus, Anabelle Bernard etc. etc.) and I am happy that Arthaus has decided to issue this performance – that was on TV as a Christmas special back in 1984 – on DVD. A welcome addition to the Offenbach catalogue. Not least because it offers a very different way of playing this music than the current versions on DVD that come from France. (And Miss Migenes even outclasses Natalie Dessay when it comes to making love to a fly.)