This updated version of the classic Kálmán operetta premiered on 25 November in Norwegian with English subtitles. “Nothing is lost, nothing is created, everything is transformed,” goes the saying that is true in the case of Csárdásfürstin at Den Norske Opera. Apart from a transgender Sylva and a lack of imposing dance scenes, Hanne Tømta’s staging is dramaturgically well constructed. [1] 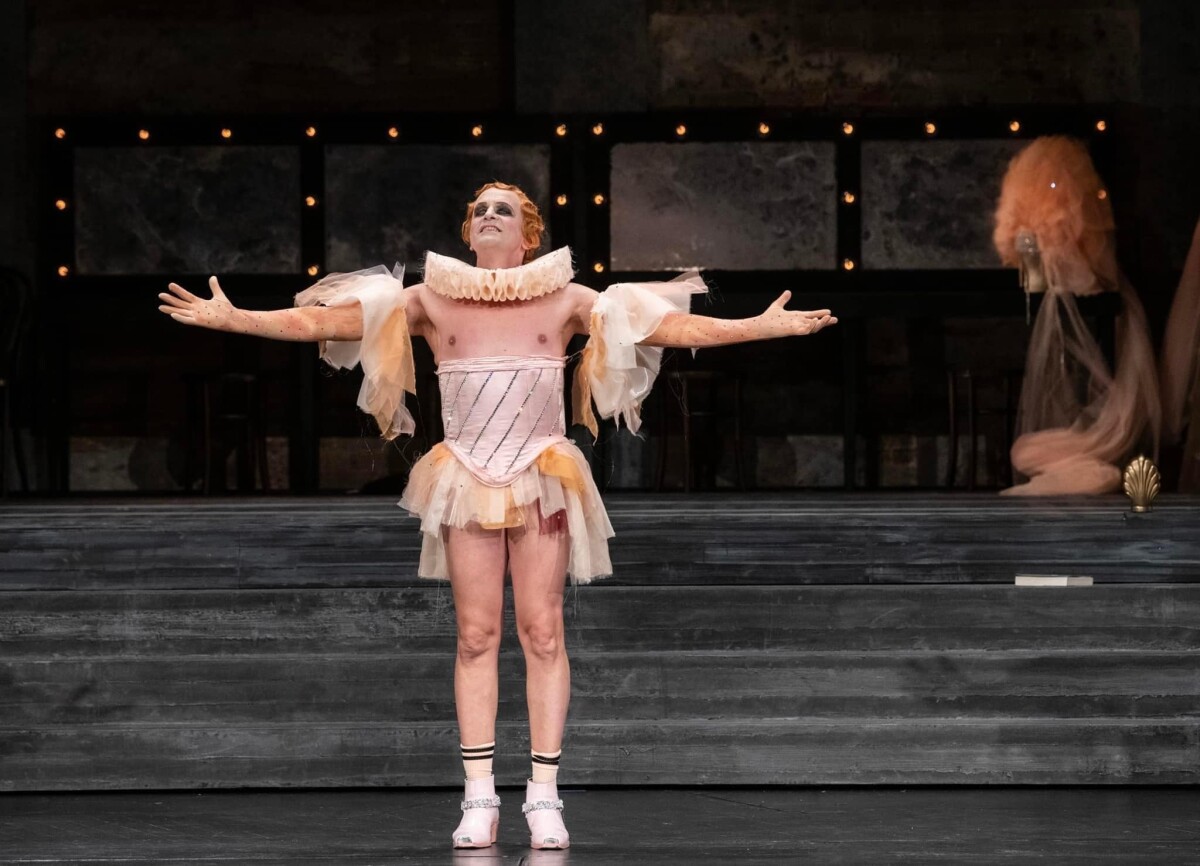 It is 2022, and the fundamental conflict of this Austro-Hungarian story seems irrelevant in the Scandinavian country. As we all know, it’s the same old conflict that we are used to from several similar operettas. The question is: what would make the story about aristocratic parents disapproving of their son’s liaison with a cabaret diva believable today?

As Zoltán Imre points out in his publication Operetta as an Intercultural Phenomenon – Emmerich Kálmán’s Die Csárdásfürstin [2], after the 1915 premiere in Vienna the piece conquered the stages of Budapest, London, Berlin and Moscow, and until 1917 it was played more than 12,000 times on various theaters around the world. In Oslo Csardasfürstin was first seen at the Centralteatret on 30 April, 1917.

The enormous number of productions worldwide means that there have been many Gypsy Princess variations. Just to mention a few recent ones: in 2020 Jan Philipp Gloger directed a surreal version at the Opera House Zurich in which the characters travel on a yacht, meet an Eskimo, so the ship starts to suddenly function as Noah’s Ark, a little later everyone ends up on Mars (!) after the climate catastrophe has destroyed earth. Alternatively, remember the 2020 production at the Csokonai Theatre in Debrecen (Hungary) that questioned traditional female roles? It was directed by the well-known Hungarian operetta tenor Károly Peller together with Péter Gemza, they re-wrote the story to present new gender norms for women. [3] 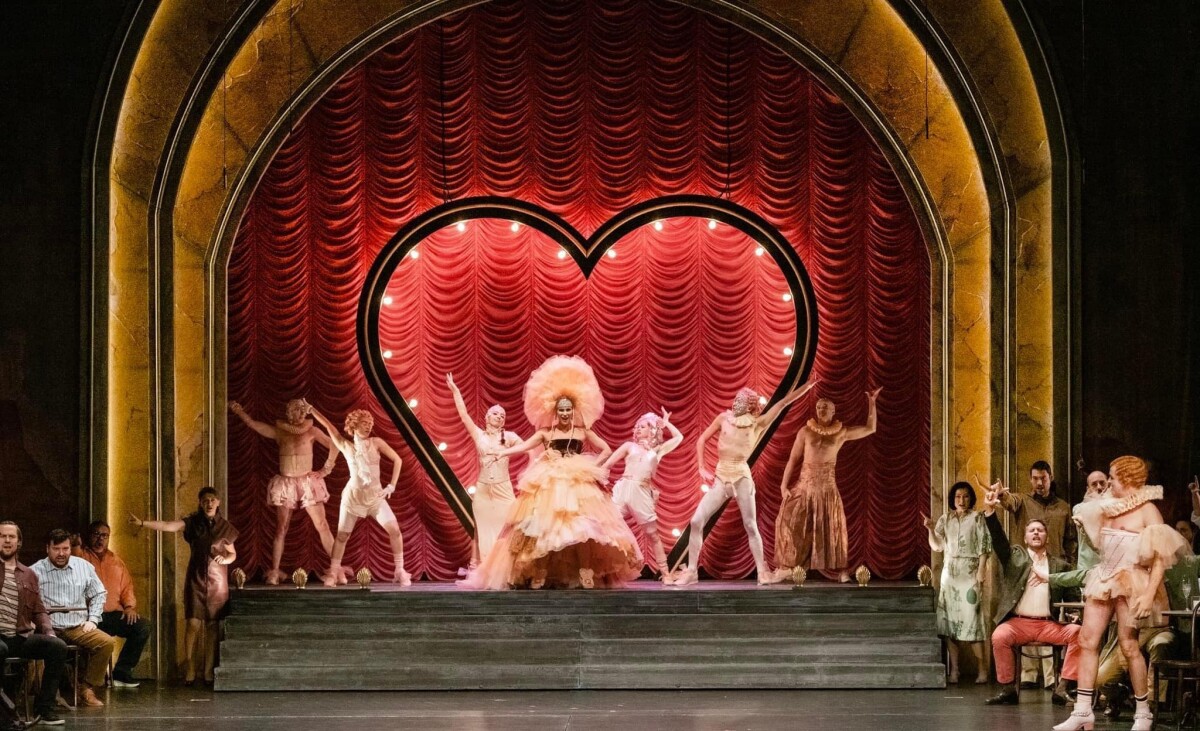 Since the genre operetta has always been very adaptable, Csardasfürstin has now been made to fit the modern age in Norway too. The basic conflict of the show is the question of acceptance, i.e., whether Prince Edwin’s family accepts Sylva and whether Edwin himself is ashamed of his partner or not. Sylvia is a trans woman, in this case, who is a celebrated cabaret star. Prince Edwin’s family doesn’t approve his relationship with her because the royal (!) family believes that it is impossible for a family with a ‘spotless family history’ to have a member in their ranks who has “transitioned” – which is seen as breaking traditions.

When the curtain goes up, the audience sees a lush and lustful cabaret world where it is almost immediately clear that the story takes place today. This is emphasized by the stylish sets (Olav Ryland Myrtvedt) and the costumes by Alva Walderhaug Brosten.

When Sylva (Eli Kristin Hanssveen) enters, we see a red heart composed of lightbulbs. Barefoot men dominate the stage, yet Boni (Rickard Söderberg) stands out: He wears high heels and a provocative costume. Edwin (Magnus Staveland) also has a feminine wardrobe. While Sylvia’s costume, as contrast, has more masculine elements. 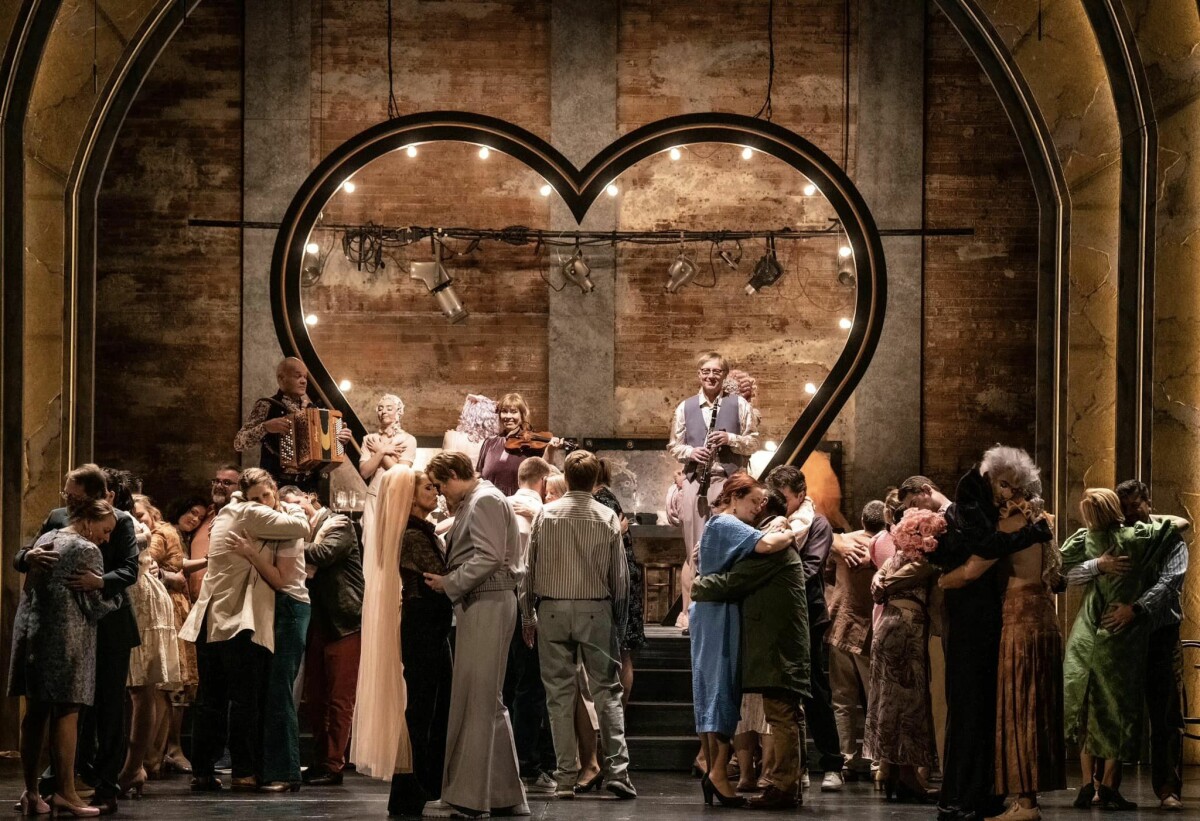 Gender questions and especially the problems Sylva causes as a trans woman in a transphobic family are articulated by Rohnsdorff in the first act: he says the problem with this marriage and relationship is that “she is he”. Everything else unfolds in the usual way, meaning that the news of Sylva’s tour abroad is a turning point, and the farewell party at the cabaret is where Edwin gets engaged with Sylva. In this ambience, Sylva is free to be who she is, her transition only becomes a problem when she sets foot into the world outside of the protected cabaret walls.

Meanwhile, the people at the cabaret are aware of Sylva’s story, and some of them make comments, such as the notary.

These problems and the attitude of Edwin’s family towards Sylva’s past move into focus in the second act that takes place in the royal palace. When Sylva reveals herself on the night of Stasi and Edwin’s engagement, she says ‘I don’t want you to be ashamed of me’, meaning that she does not want Edwin to face prejudices because of her. The guests ask Sylva whether the rumours about her are true, and she decides not to hide who she is anymore and who she used to be.

One of the greatest moments of this second act in Oslo is Edwin’s solo ‘Today I have dreamed of you again’ from Kálmán’s The Violet of Montmartre [Das Veilchen vom Montmartre, 1930], the inclusion of which allowes the tenor to show his deep feelings. 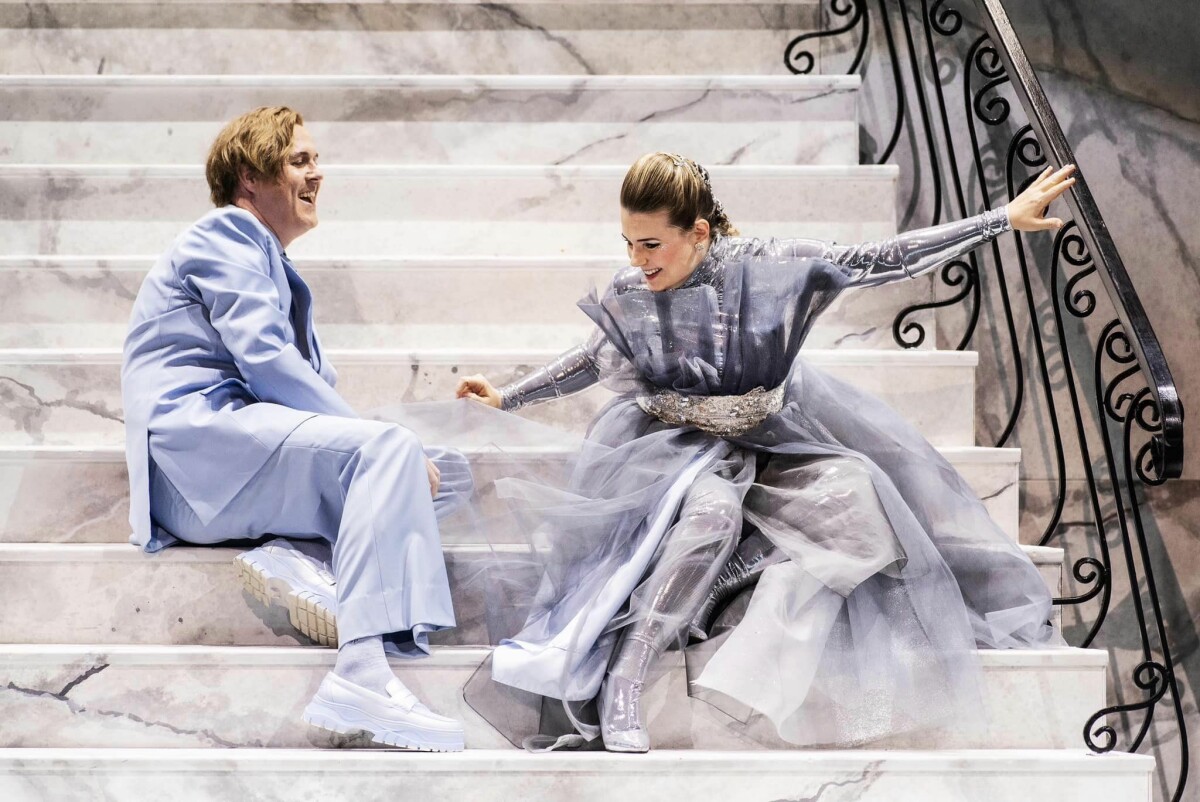 However, the scenes involving the most soubrette do not work at all – there was no applause after the great dance duets – which is probably also due to the poor choreography throughout. Jonas Øren does not follow other great choreographers, the dances here go against the music. There is no cancan or csardas, only a short waltz. In the great duet scenes, the static atmosphere is almost disturbing (Sylva sings and talks with her hands in her pocket several times).

Between Sylva’s dramatic exit from the palace and her arrival at the bar in act 3, gypsy music sets the mood and relieves tension. Their mutual friends want Sylva and Edwin to make up and they – obviously – manage to do so. Edwin states his love publicly, which is immediately filmed by someone and uploaded to the internet. Edwin’s royal parents are still horrified by what others might think of the marriage: ‘Anhilte, we must move to Switzerland’ says Edwin’s father, and right away, they start discussing how they could benefit from accepting their son’s choice (for instance, they ask ‘Can we use this for climate stuff as well?’). But a happy end is a happy end, eventually, the parents come around, yet it leaves us with the question of how honest this acceptance is if it is forced.

It worth pointing out that the constant reference to Sylva being transgender does not feel pushy or too much, instead, the audience is made more and more aware of what that means. We are served cultural background, but the story remains, at its core, a story about acceptance. Here, it is wrapped into a dynamic and glittery operetta tale. Therefore, nothing is lost, nothing is created, everything is transformed.

[1] A brief summary of the play, the cast and other information is available in English on the site of the Opera House. https://operaen.no/en/Productions/die-csardasfurstin-oslo-operahouse/ (29/11/2022)

[3] Read more in Hungarian by Emese Lengyel (2021): The Gypsy Princess differently. Magyar Teátrum Online, https://magyarteatrum.hu/lengyel-emese-csardaskiralyno-maskepp/ (28/11/2022)
‘The change, firstly, can be observed on a thematical level. The libretto has such dramaturgic solutions that are able to break the terms of the song and the story. On the one hand, new characters are introduced into the plot: Terka, an older comedienne, and Leopold, Stasi’s father. Terka’s character reforms the frames of the story, as she is an ex-cabaret lady, she is the one shining a light on Anhilte’s (Hilde Gál) secret. Therefore, Edwin and Sylvia, as well as Boni and Stasi can be together. Moreover, the play portrays women differently from the 1916 (the first Hungarian translation) or the 1954 version (iconic; centred around Hanna Honthy/Cecília; politically rephrased, socialist), as this one is centred around the older soubrette’s character, as well as the repertoire of other woman characters widened. Two new songs are also introduced to this play – from Kálmán’s Das Hollandweibchen – and each belongs to the character of Terka and Anhilte.