Operetta in East-Germany has turned into a topic I have become more and more fascinated with. Maybe because my first operetta experience in the East was Offenbach’s Die Insel Tulipatan at the Staatsoper in Berlin, back in the early Eighties. An experience that remains extra special, because the audience in the socialist part of Germany reacted so differently to subtext and jokes; I understood how political satire works under censorship, and how people laugh at the way kings and heads of state are ridiculed in operetta, in a way unknown in the liberated West. Now, the Schwules Museum* in Berlin presents an exhibition on stage and set designer Peter Kothe, which includes various designs for operetta productions in the former East.

Peter Kothe (r.) and his friend Klaus, dressed up for a party in 2002. This is the official poster image for the exhibition at the Schwules Museum*. (Photo: Annette Frick)

I admit, I had never heard of Mr. Kothe before. And after seeing the poster for the exhibition, I expected more of a screaming faggots show (which isn’t a bad thing). I was certainly not prepared for an operetta experience.

But the majority of the objects on display are designs for (musical) theater productions in the East German provinces. Kothe had started out, promisingly, as a designer for TV films. But after he applied for a visa to travel to the capitalist West (to “expand his artistic horizon”), he was put on a black list and could only work in remote places such as Wittenberg, Greifswald, Frankfurt/Oder. He did not become famous with these productions, far from it, but being so far afield allowed him to experiment to his heart’s content. One of the operettas he designed in that period was Paul Lincke’s Lysistrata, based on Aristophanes. 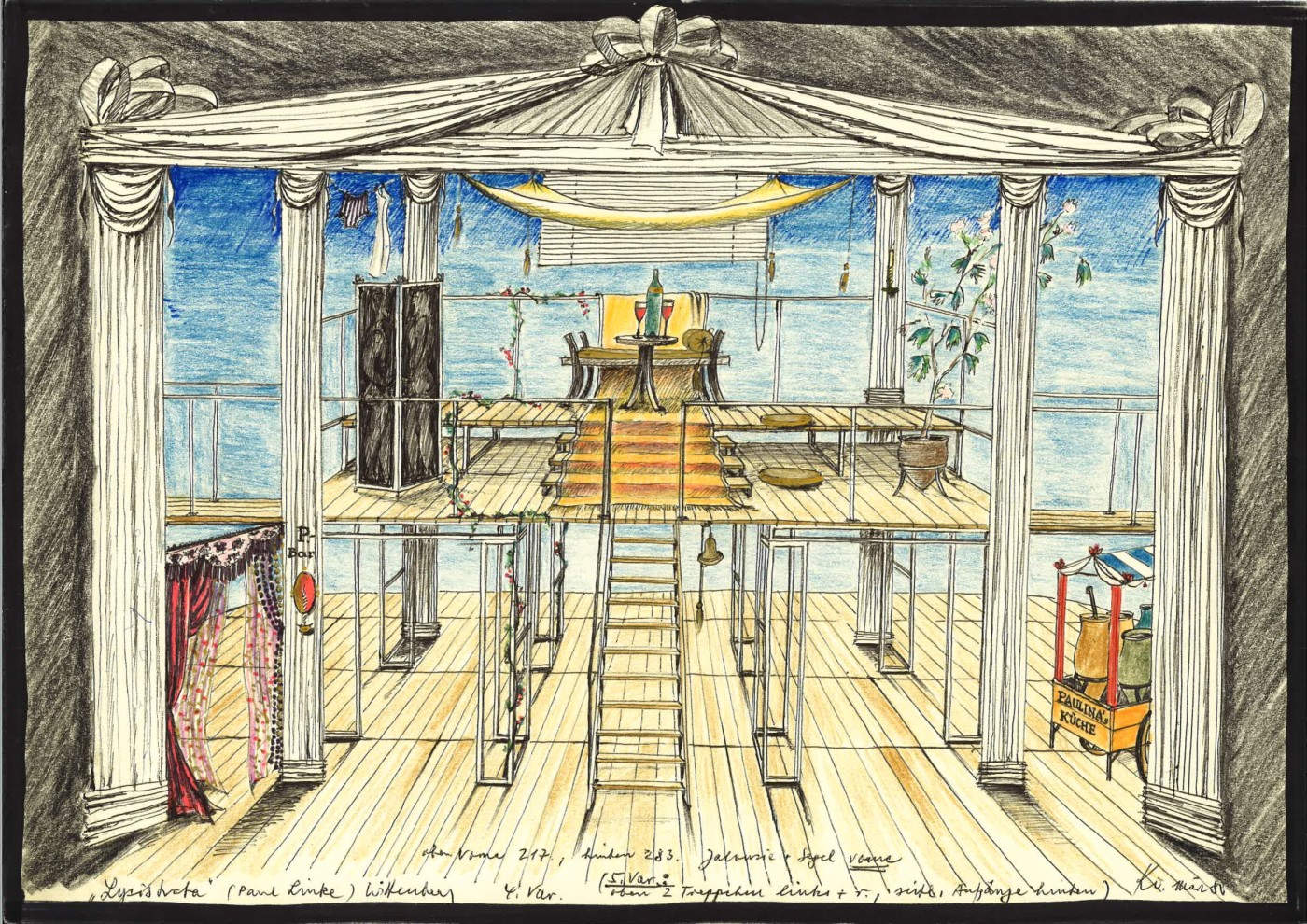 This mostly forgotten show – with the famous “Glühwürmchen Idyll” – was resurrected in the East as an anti-war statement. In the case of this 1980 production directed by Erhard Holland Moritz, it was re-written by Heinz Neumann. (To make sure the anti-war message came across loud and clear.)

In the mid-Eighties, Kothe was thrown out of the DDR and moved to the West. The unemployement office found him a job in Bielefeld, where he was permanently employed as a stage designer for productrions of Streetcar Named Desire, Merry Wives of Windsor, Look Back in Anger or Brecht’s Furcht und Elend des Dritten Reichs. Once Kothe reached the official retirement age, he moved back to Berlin, and once the wall came down, he returned to some of the East German theaters where he had worked before. In Wittenberg he designed operas such as Traviata and Freischütz, but also a very interesting looking Countess Maritza. The semi-abstract style – with Epic Theater scaffolding and realism combined – reminds me strongly of the Metropoltheater productions that I saw after the fall of the wall in East Berlin. It’s an operetta style totally dissapeared today, but actually very effective and attractive.

The exhibition curated by Wolfgang Theis presents hundreds of drawings for sets and costumes. But also a lot of private material. The combination of personal belongings and official work shows how difficult it was under the political circumstances to live a happy life, and create art that had to be approved by the mostly humorless authorities. 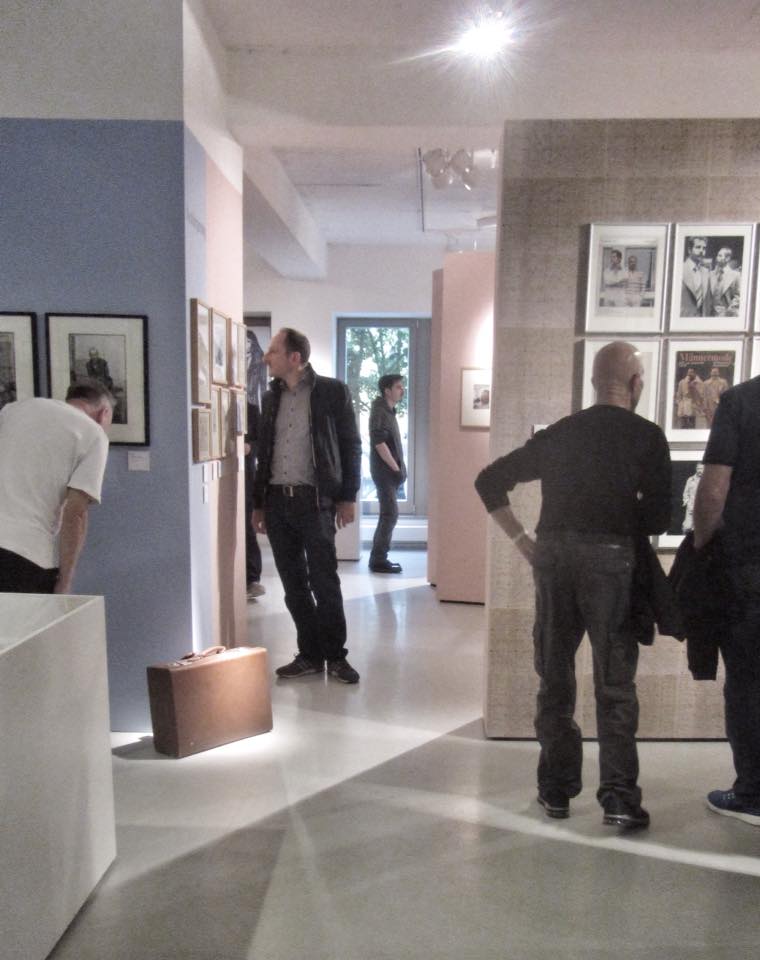 Visitors at the opening of “Bühnenbild: Peter Kothe. Ein ostwestdeutsches Leben”. You see the suitcase with which Kothe left the DDR. (Photo: Schwules Museum*)

Also part of the exhibition are photos from two famous films that Kothe worked on: Rosa von Praunheim’s I Am My Own Woman/Ich bin meine eigene Frau about the life of Charlotte von Mahlsdorf, who Kothe knew from East German times. And Praunheim’s Magnus Hirschfeld epic Der Einstein des Sex.

There is even a stunning little statue of Mahldorf’s head, created by artist Kai Theichert. He came to the opening of the exhibition and posed side by side with film director Praunheim and his Mahlsdorf head. 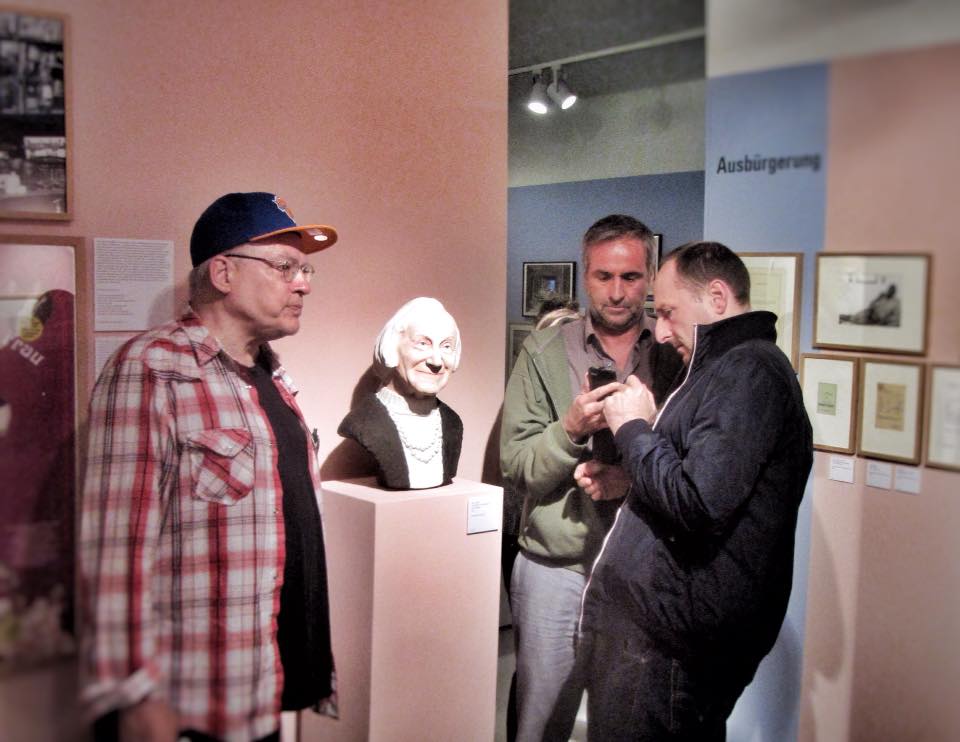 Film director Rosa von Praunheim (l.) next to the statue of Charlotte von Mahlsdorf, with artist Kai Teichert and partner on the right side, trying to take a photo. (Photo: Schwules Museum*)

The exhibition is lovingly put together and offers so much material that you can easily spend an afternoon there, studying all these shows that were once in repertoire in the East – and that in many cases are completely forgotten today. (Try, for example, finding anything on Gunter Reinecker’s Der König soll geigen, which Kothe designed in 1979 at the Kleist Theater in Frankfurt/Oder.)

There, you see Kothe as a photo model posing in outfits from 1976 (“For young unconventional men”). Fans of vintage clothing will consider this a must-see. 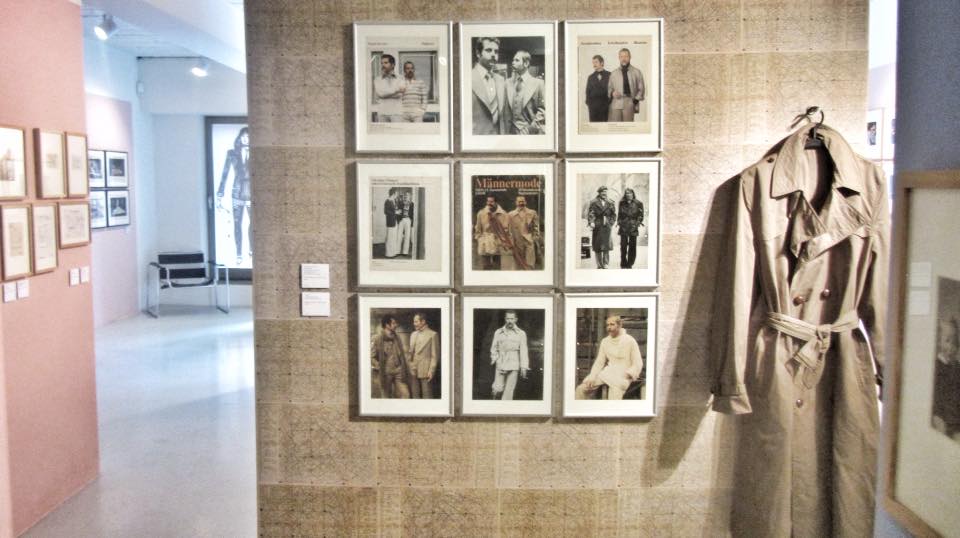 Pages from the East-German fashion magazine “Sybille”, 1976. Plus, the original coat as worn in the fashion spread. (Photo: Schwules Museum*)

The exhibition runs until October 2016. It coincides with another big DDR-themed exhibition in Berlin at the Martin-Gropius-Bau, where Gegenstimmen: Kunst in der DDR 1976-1989/Voices of Dissent: Art in the GDR 1976-1989 opened this week-end. It’s a much more glamorous show with more famous artists, over at the Gropius Bau. But the rare view of opera and operetta in the provinces – in theaters mostly closed now – is much more fascinating at the Schwules Museum*. It documents a theater scene that is very close, in terms of time, and yet as distant as can be in terms of aesthetic. Worth exploring! 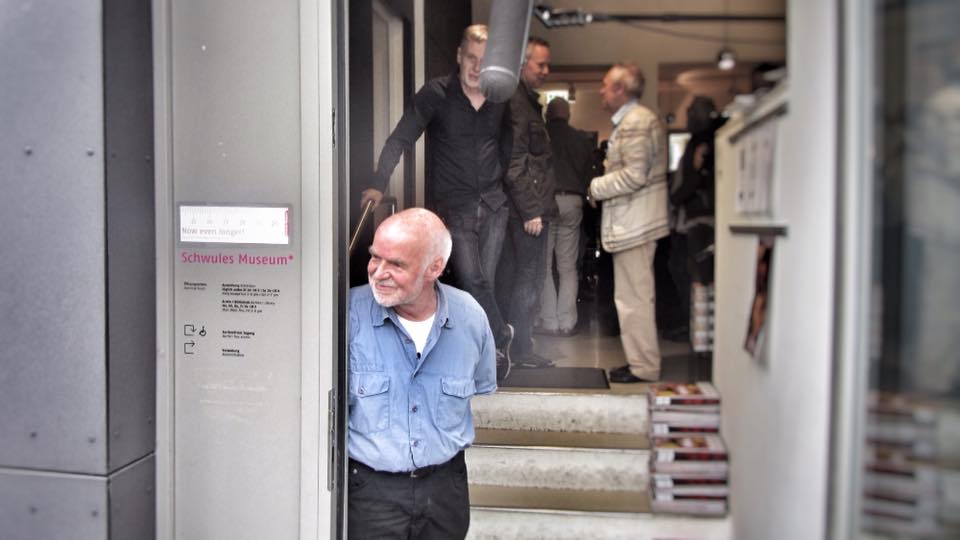