What do you do when all the world is abuzz with football, and you don’t give as f*** about ballgames? Well, you can always focus on Barbra Streisand as an alternative, or, to be more precise, focus on Barbra’s nose and ask what that object of Jewish pride has to do with Dmitri Shostakovich. And what a new production at Berlin’s Komische Oper has to do with Billy Elliot? And why the story told in The Nose is a queer one of particular relevance for queer people, giving answers that a 90 minute football match (sadly) does not give. 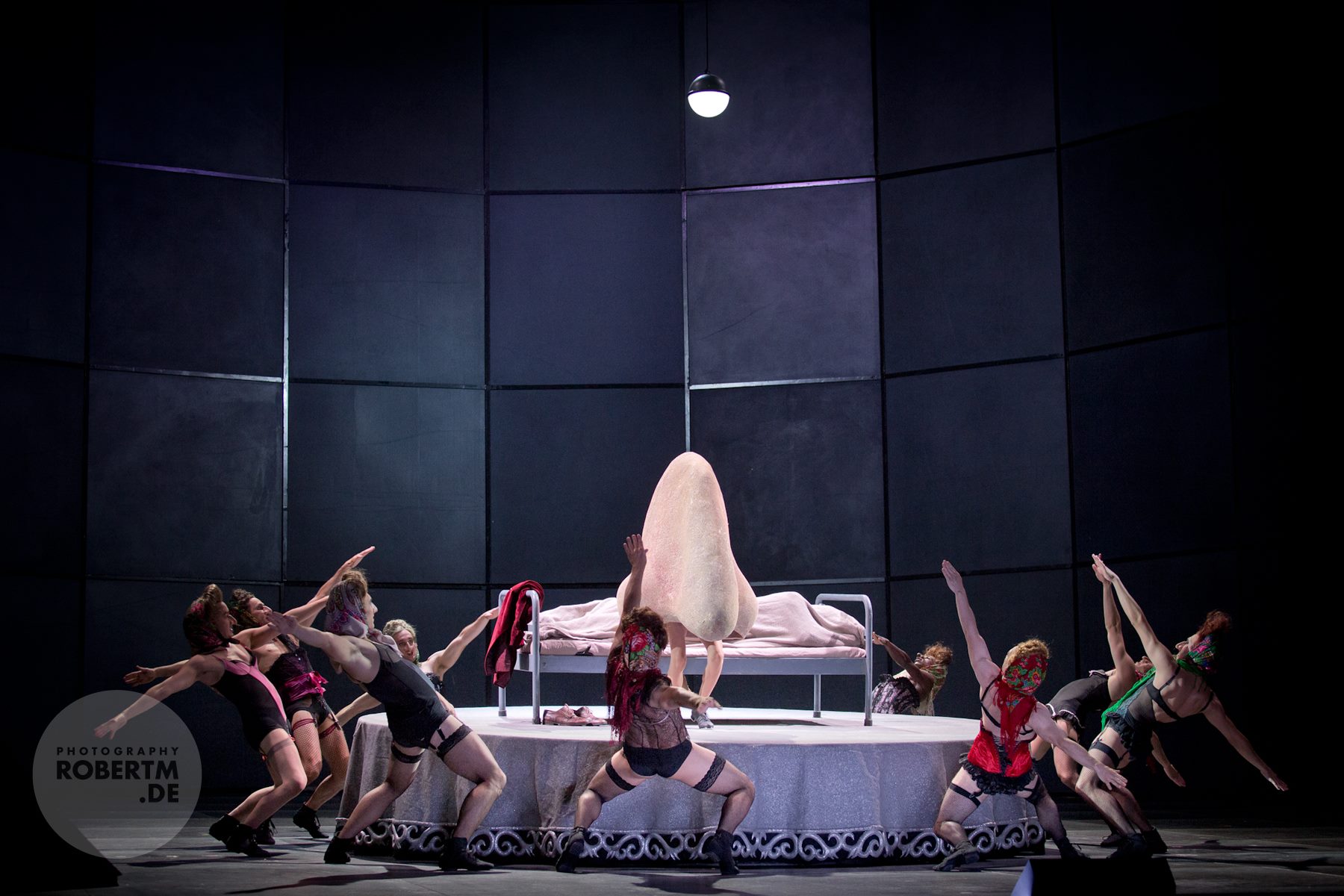 The “nose” as the center of attention in Shostakovich’s opera at Komische Oper. (Photo: Robert M Berlin)

Shostakovich’s 1930 opera is about a man whose nose goes missing; as a result he feels he’s not a ‘real’ man anymore, and he’s ashamed to show himself in society, fearing he’ll be treated as an outcast. He tries to find his nose, stick it back on, and pretend to be ‘normal’ – which he does, in the end, with a fake nose that allows him to date girls, eat in a restaurant, walk the streets of St Petersburg, resume his ‘normal’ life, even if it’s a fake and only a strap-on. 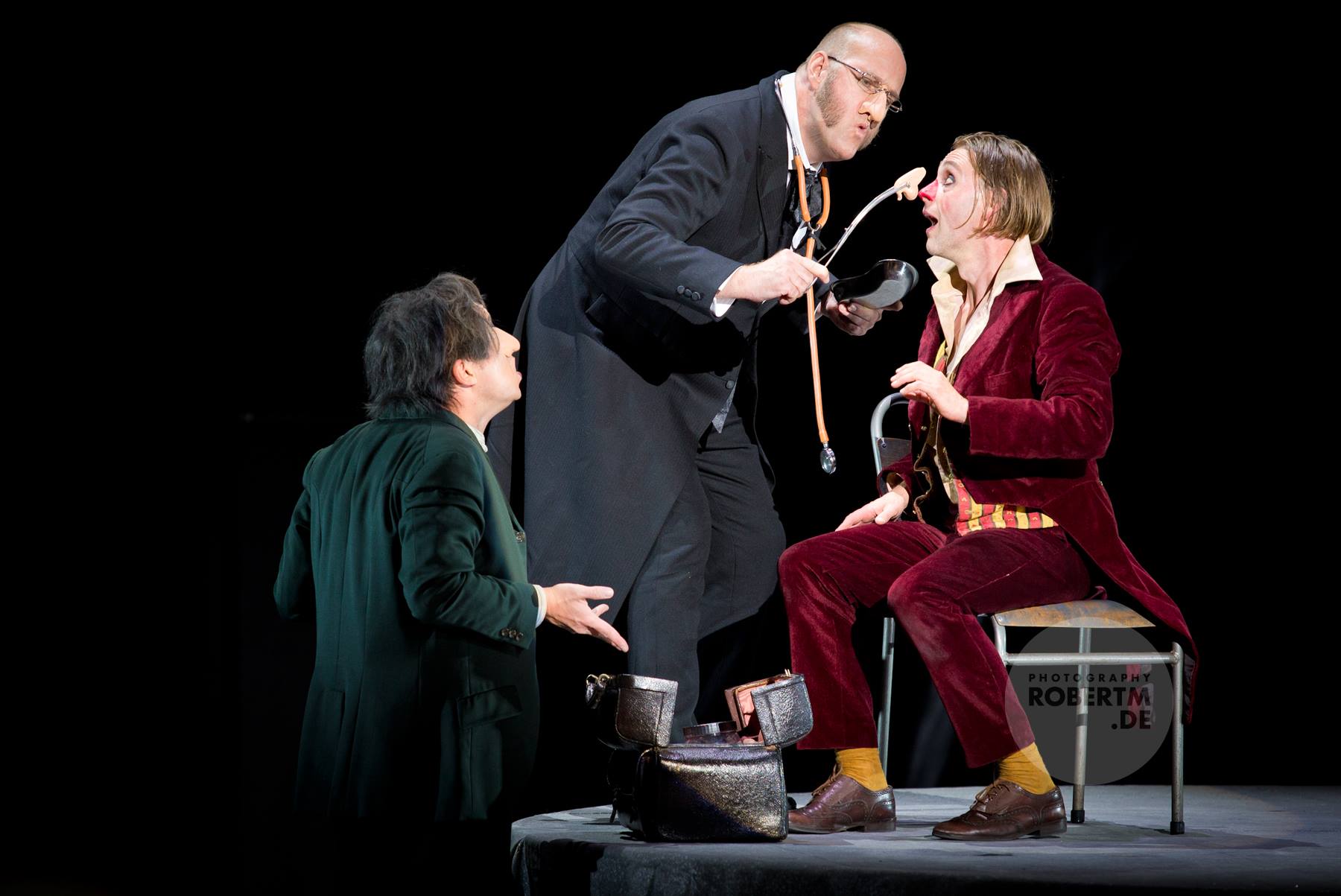 You can easily see what might attract a gay stage director – and queer audience – to this rarely performed piece. It was written by Shostakovich as a student in the late 1920s, it premiered in Leningrad, but quickly disappeared from Soviet stages because the authorities declared it lacked a ‘positive hero.’

Barrie Kosky as a self declared ‘gay Jewish Kangaroo’ scored a major success with this production of The Nose at Covent Garden, London in 2016. He captured the British love for the eccentric with a staging that has grotesque super-noses inspired by Barbra running around and dancing, in a knock-them-on-the-head choreography by Otto Pichler. His boys in Streisand-noses with bare legs, and alternatively in garters with Russian folkloristic patterns, need to be seen to be believed. When the dance group first took possession of the stage and turned it into Rite of Spring meets La Cage aux Folles the Berlin audience erupted into thunderous applause. And when later the title-role-nose – played by petite Lion Sturm – tap danced his troubles away in a grand solo, the applause for this Berlin Billy Elliot became tumultuous. 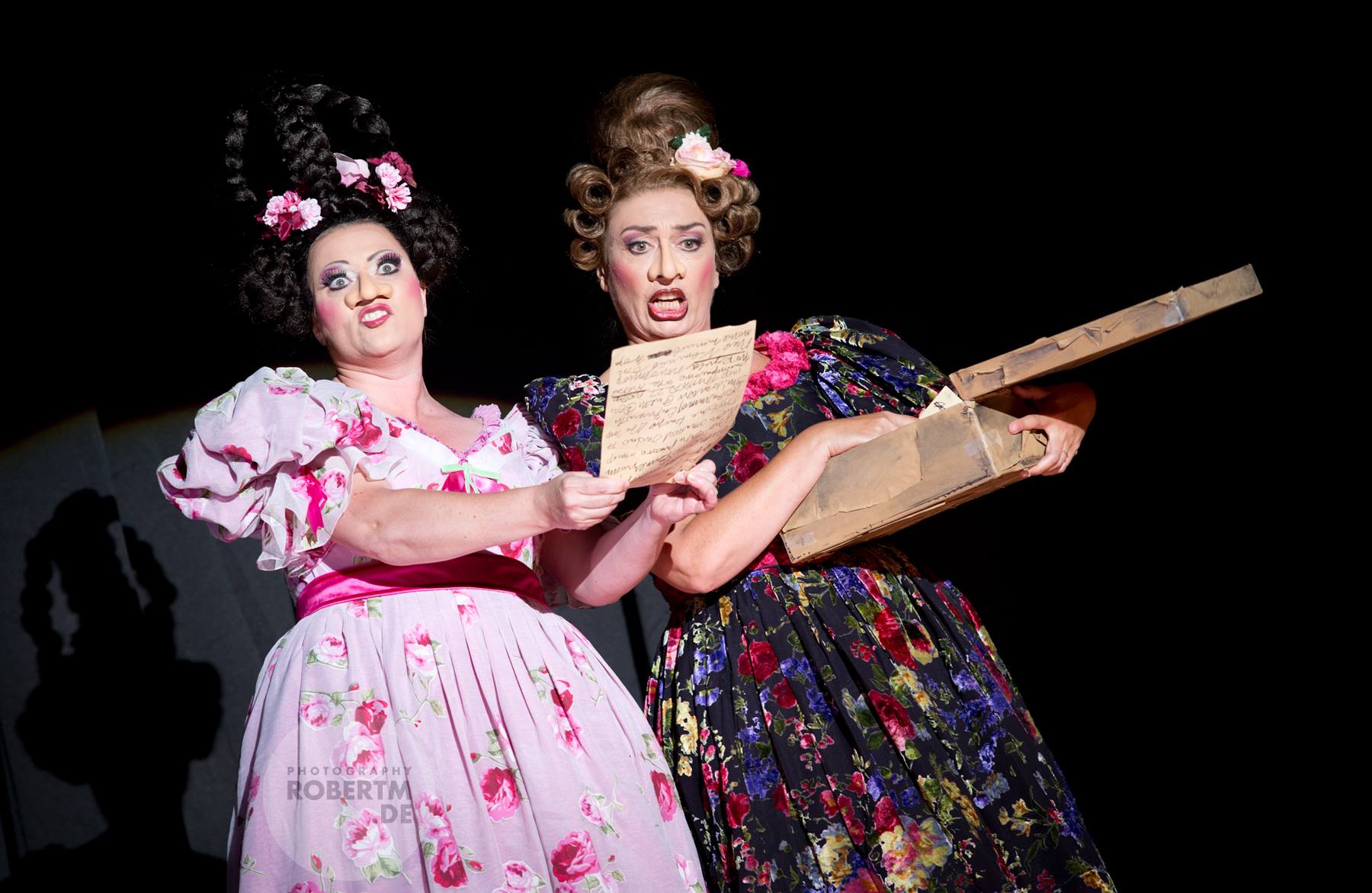 Kosky’s production went from London to Sydney, and now arrives in Berlin, where it is seen in a totally different context. Because here, in Berlin, fans of ‘The World According to Barrie’ see this over-the-top madcap Nose in the context of the various operetta offerings that grace the repertoire. And that’s a very good context for Shostakovich and his early excursion into the field of musical theater: because operetta, too, is about the absurdity of the world, its Monty Pythonesque aspects, it’s also about people being different but not giving a dam what society says, starting with Offenbach’s Belle Hélène and running all the way through to Oscar Straus’ Cleopatra in Die Perlen der Cleopatra. Both shows are stars in the Komische Oper heaven. Adding Shostakovich makes this heaven sparkle even more. 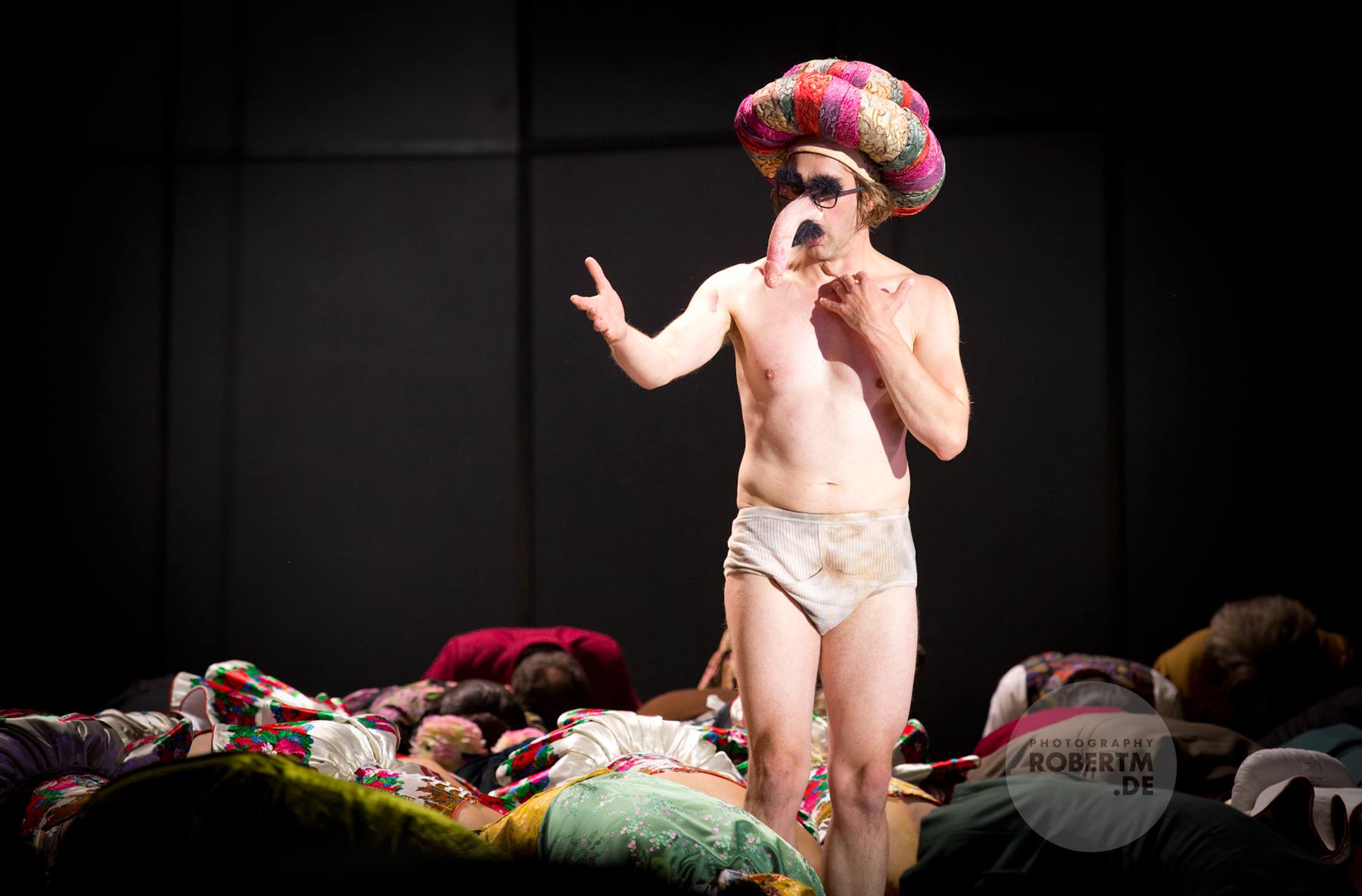 A nose can be many things: Günter Papendell in “Die Nase.” (Photo: Robert M Berlin)

While the grand divas in most of these operetta productions are Dagmar Manzel, Ursli Pfister/Christoph Marti, Katharine Mehrling, and Desirée Nick (among others), the ultimate show queen’s wet dream, Barbra Streisand, is only symbolically present in the Nose production: with her power-nose mixed with caricatures of anti-Semitic cartoons from Nazi times. Which creates another powerful metaphor that can be linked straight to operetta. You’ll recall that Hans Severus Ziegler as organizer of the Entartete Musik exhibition devoted an entire wall to the ‘degeneration’ of operetta, showing a cartoon of Oscar Straus with a massive ‘Jewish’ nose akin to what you now see in the Kosky production, with costumes by Buki Shiff and sets by Klaus Grünberg (together with Anne Kuhn).

You could call it a ‘reclaiming’ of the nose, an act of defiance. And a brilliant one at that. 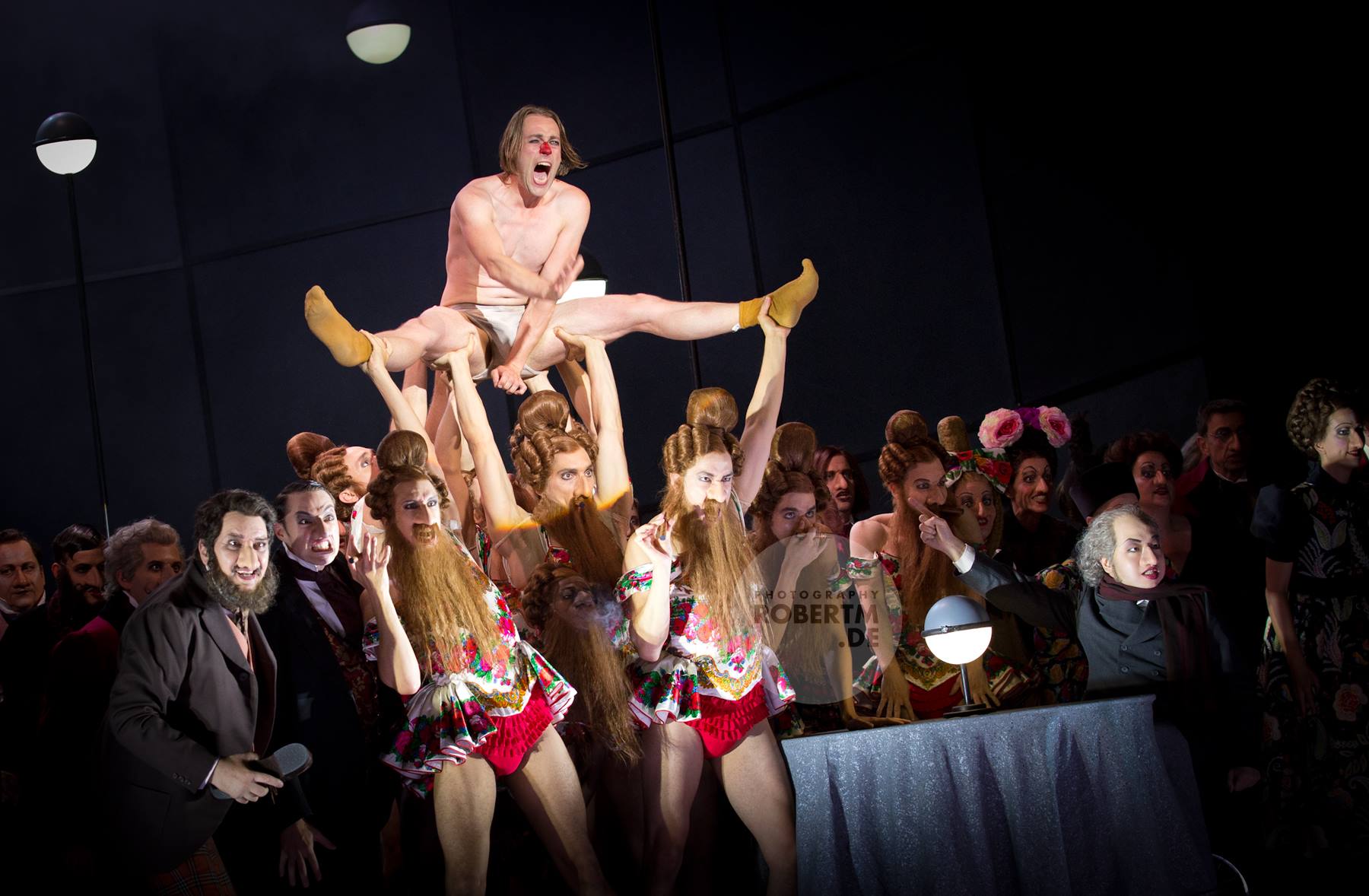 Which leaves bass-baritone Günter Papendell as Platon Kusmitsch Kowaljow, the man whose nose goes missing. He looks impressive with a bloody spot in the middle of his face that he tries to hide. He’s a superb stage presence, a super sympathetic one, too. Which shifts the message of the story, because originally it’s about a pompous St Petersburg official whose vanity drives him to find his missing nose. With Mr. Papendell there is no pompousness and no vanity, there is only deep human despair – a kind of Russian-absurdist version of Wozzeck. And that brings a new level of identification to the show that is highly contemporary. Because it asks why so many people wish to ‘fit in’ and conform, instead of celebrating their difference. Which is why there couldn’t be a more fitting symbol for it all than Barbra’s nose. 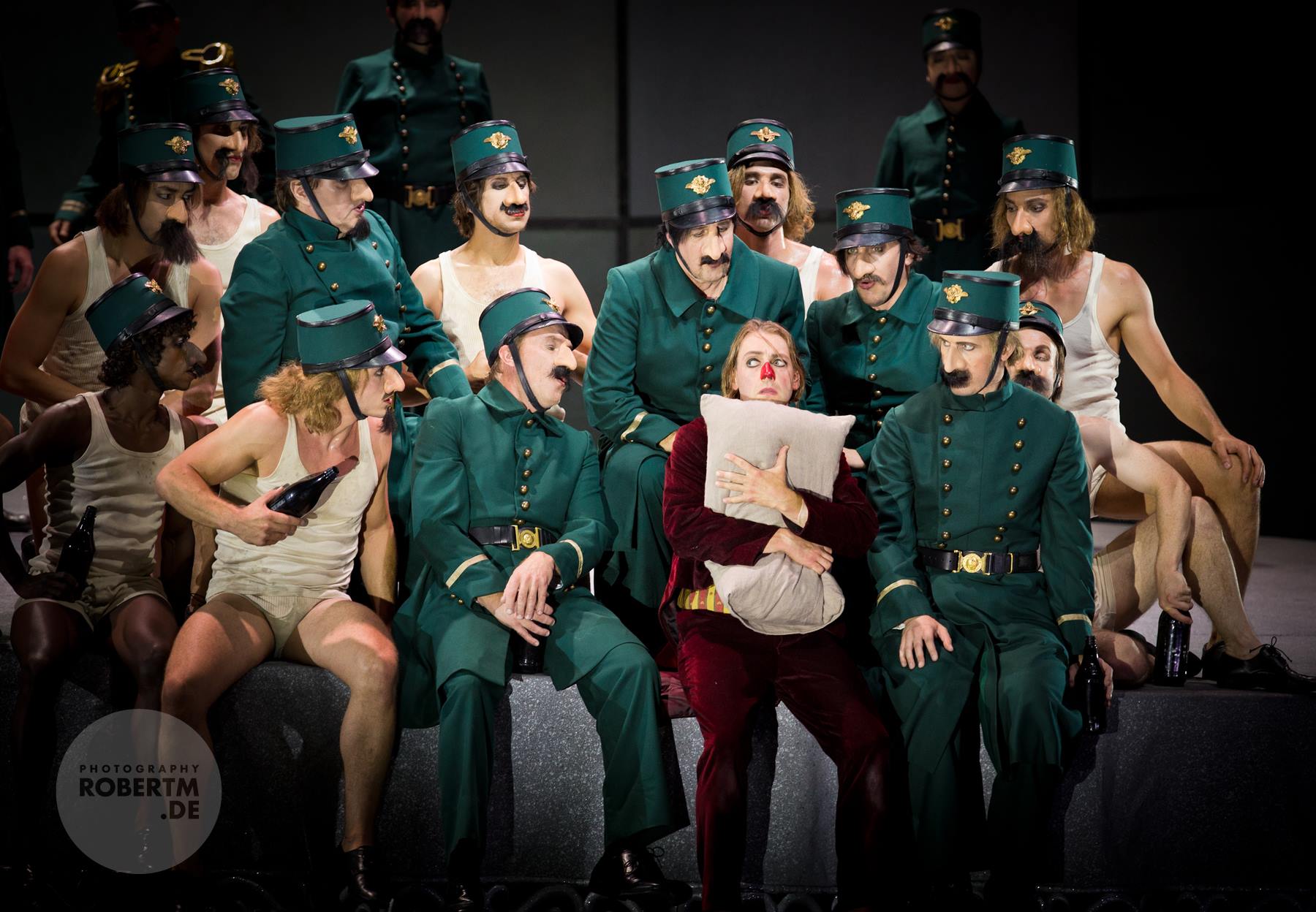 Trying to blend in: Günter Papendell and the ensemble of Komische Oper in “Die Nase.” (Photo: Robert M Berlin)

The production is conducted in Berlin by Ainārs Rubiskis, he lets Shostakovich’s extravagant orchestrations soar, creating a perfect blend of 1920s syncopations and all that was to follow in Shostakovich’s oeuvre. Special mention must go to the theremin solos which give this score an eerie quality that links The Nose with the glitter-and-doom world of Cabaret and Paul Abraham’s Die Blume von Hawaii, both from or set in the early 1930s. (The Berlin staging was prepared by Mr. Kosky’s assistant Felix Seiler who recently directed Blume von Hawaii in Osnabrück, as you might recall.)

I would love to hear Mr. Rubiskis one day with Shostakovich’s only ‘real’ operetta, the 1956 Moscow, Cheryomushki. It’s musically easier to access, more sweeping, but equally fun and madcap. It would fit into the repertoire at Komische Oper perfectly. (The famous film version at times looks like it’s an early Kosky production.)

With all the above said, it’s not surprising that Die Nase is presented by the magazine Siegessäule whose slogan is “We Are Queer Berlin.” The other media partner is Der Tagesspiegel, a daily newspaper which offers a “Queerspiegel.” (Three cheers to that!)

With a casually-witty new German translation by Ulrich Lenz – who comes up with the amazing world “Ent-Nasifizierung” for this show – and with an equally wonderful ensemble that includes operetta heroes Johannes Dunz, Tom Erik Lie, Karsten Küsters (from Bremen’s Vetter aus Dingsda) and the glorious Mirka Wagner, this Die Nase is a summer spectacle whose six performances enrich the Berlin opera scene (which you cannot seriously say about the other two premieres this week-end). 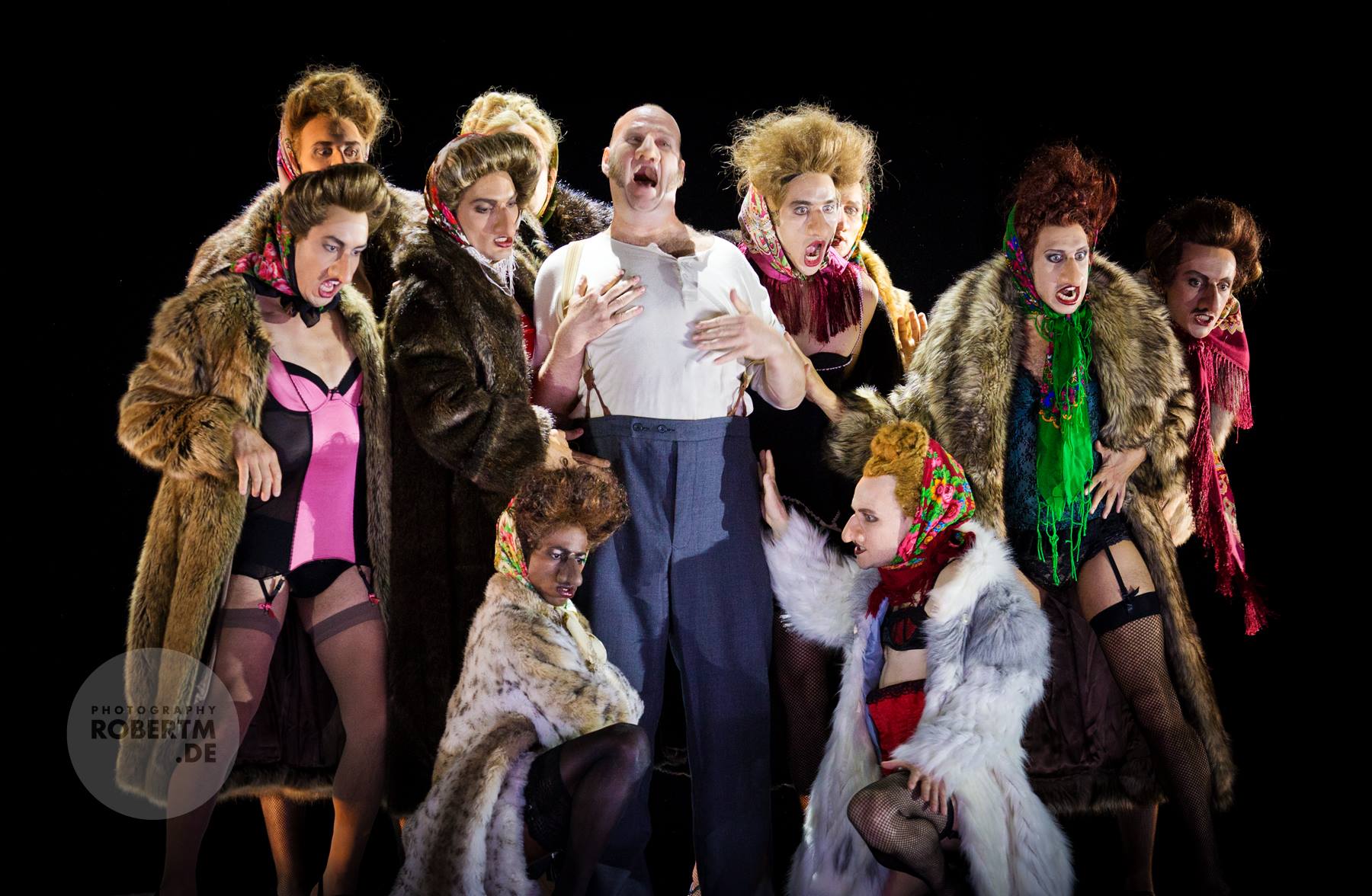 Jens Larsen and the “ladies” of the ballet in “Die Nase.” (Photo: Robert M Berlin)

Don’t wait, buy your tickets now, as Mr. Kosky likes to say. As usual, he’s right. And if you must have football then wait till next spring when Roxy und ihr Wunderteam comes to town … where else would this wonder team stop but at Komische Oper, with Ursli Pfister as Roxy? There might be a strong Barbra element in his portrayal of an Abraham heroine. So stay tuned.