It is often interesting to compare how researchers in different parts of the Western world look at art forms in so many different ways: operetta is no exception to this. While scholars and stage directors in German-speaking regions have recently discovered the “bodies & gender” aspects of operetta, maybe even the sexual (and homosexual) side of it, and while the British seem to worry about “concepts” and little else, at least if they are called Ryan Minor and work for The Opera Quarterly, the Americans are ahead of the rest here and have delved, head on, into the big field of “racial issues.” 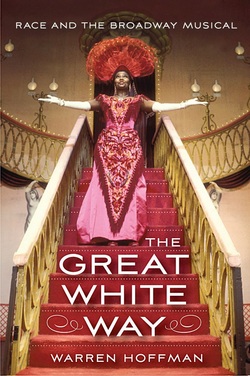 This became clear to me, with a bang, during the operetta conference the Komische Oper hosted earlier in 2015. While most Germans at that conference spoke about operetta pre and post 1933, the feminist side of operetta and how to get over the Adorno influence, the few Americans that were present discussed “people of color” as an extension of their gender debates. Most notably, Bonnie Gordon did so when she interpreted Le belle Hélène as a “Black Venus” and asked about “the place of black women’s bodies in discourses of degeneracy.”

While Gordon’s forced inclusion of black women in her otherwise fascinating essay on “Operetta & Display” seemed somewhat unconvincing to me, also in the published version of the conference (Kunst der Oberfläche: Operette zwischen Bravour und Banalität), there is another new book that demonstrates brilliantly where all of this could be going to. Warren Hoffman has presented a 251 page study about “Race and the Broadway Musical” at Rutgers University Press, entitled The Great White Way. And even though it has Pearl Bailey as 1967’s “all black” Hello Dolly on its cover, his book is not only about “black” aspects of musical theater; though they certainly play a prominent role.

In the course of six main chapters, Warren discusses how Native Indians are treated in Annie Get Your Gun, and how “I’m an Indian Too” was taken out of the 1999 Bernadette Peters revival on Broadway. He asks about the representation of Asians in Flower Drum Song, including the re-write by David Henry Hwang in 2001. But there are also fascinating analysis of Americans with “unnaturally blonde hair”, Puerto Ricans and “Brown Face” in West Side Story, among many other famous shows dealt with (Chorus Line, 42nd Street, Music Man etc.).

Warren rightfully asks whether the new “political correctness” and the adaptations of shows “to fit current sensibilities” are such a good idea.”Saying that a libretto can be rewritten with little hesitation or thrown out altogether contributes to the ongoing misconception that musicals are frothy entertainment and have nothing particularly important to say or offer beyond their music in the first place.” With regard to the new Flower Drum Song of 2001, now billed as “Rodgers & Hammerstein’s Flower Drum Song” (even though it’s a re-write), Warren says: “West Side Story may be a modernization of Romeo and Juliet, but it never pretends to be or replace Shakespeare’s classic play.” He called the practise of re-writing shows for PC purposes “a dicey” one: “While perpetzuating stereotypes is obviously wrong, revising shows to make them acceptable for the current age feels like whitewashing history.

Maybe it does mean that certain shows are not revivable or can only be seen as museum pieces [...]. While Mark Twain’s The Adventures of Huckleberry Finn remains a contentious text because of its use of the N-word, most attempts to rewrite the book and elimintate the pejorative term have been looked at with great skepticism and even disdain.

Either the book is read and taught and we discuss the context that produced the book or it’s banned and not read.” (“Certain representations or performances can be read as racist by one group of people and seen as mere ‘entertainment’ by another.”)

Warren also demonstrates – rather brilliantly – that the supposed racism in Oscar Hammerstein/Jerome Kern’s Show Boat (1927) is not the straightforward affair many make it out to be. Warren shows that with the often cut song “In Dahomey” Hammerstein “reveals that the figure of the African ‘savage’ is a performance as well,” just like being white is a performance (“Only Make Believe”). That argument concludes his, at first, somewhat predictable summing up of the pros and cons regarding Show Boat; and I must confess: for me it was one of the most worthwhile sections of the book that went far beyond the other recent analysis I have read about the Kern/Hammerstein classic. Proving that even back in 1927 matters were not so simply “black and white” as many would like to make us believe today, people that scream about the misrepresentation of people of color in historic shows like this one, urging that they never be performed again – or only in “cleaned up” versions.

There isn’t any real operetta section in Warren’s book, unless you count the all-black 1920s Mikado which is briefly mentioned (Erik Charell’s Swingin’ the Dream is left out). But the author demonstrates that the race issues he discusses are an open field operetta researchers should look at, too. Certainly, when a Mikado production gets cancelled in New York in 2015 because of the “Yellow Face” allegation, while at the same time the Ohio Light Opera moves forward and announces a Mikado for their 2016 season – but wouldn’t touch Kalman’s Golden Dawn (1927) because of the “Black Face” aspects involved. These black face and yellow face elements were (and are) part of the absolutely anti-realistic ideal of operetta, in which anyone can be anything: female actresses can play men (Boccaccio), male actors can play women (Mesdames de la Halle), Brits can play Asians (Mikado) and French can pretend to be Chinese (Bat-ta-clan), blacks can turn the entire show around and produce a Hot Mikado, and the Japanese could readjust a White Horse Inn any time they wanted to. So why not celebrate these open possibilities – and analyse them in their proper historic context, as Warren does for musicals?

If you take this new PC idea, you might ask how anyone can still perform Abraham’s Viktoria und ihr Husar with its first act set in Japan with Asian characters on stage, not to mention Die Blume von Hawaii with its Hawaiian characters in Hawaiian attire. And what about the gypsys in Countess Maritza or Gypsy Princess – when will someone take offence there, with the 100th Csardasfürstin anniversary coming up next month with a gala concert in Budapest?

The new Komische Oper book edited by Clemens Risi and Bettina Brandl-Risi is a very first introduction to the racial debates in operetta; Warren Hoffman’s book delivers all the key cues that can be applied to operetta as well. So it remains to be seen how soon researchers on this side of the Atlantic will follow the scent and present in-depth racial or ethnical readings of operetta titles, from Geisha to Maske in Blau, to name just a few.

Of course, it will also be interesting to see when American stage directors will get over the decades old ballgowns-and-schmalz idea of operetta and present it with all the modern aspects that US researchers are currently discovering within the genre. Which obviously also applies to the European side of things. Stay tuned!

To finish, here’s an amusing April 1, 2000 post on the then new Annie Get Your Gun without the Indian numbers cast album: “Also due is Annie Get Your Pepper Spray, a politically correct ‘revisal’ of the Berlin classic, in which Annie sings ‘I’m a Native People Too,’ resigns from the Wild West Show in protest over Buffalo Bill’s disrespectful treatment of animals, and goes off to start a radical feminist separatist vegan commune with her new lover Calamity Jane.”