Ah, yes … the UdK students. Watching the musical theater stars-of-tomorrow perform a “collage” that’s obligatory for them in their second year at the University of the Arts really is something else. Often it’s mind-blowing to see the collective energy and talent, dazzling good looks and absolute will-to-conquer-the-world. The 2018 performance cryptically entitled Wenn ja wie viele (“If yes, how many”) is no exception, but it offers various new aspects about race and religion, disabilty and female empowerment that made my mind race ahead, wondering how they could apply to operetta. One day, maybe, if these nine exceptional youngsters venture into operetta land properly, with real operetta roles, and present us with for example a black African Danilo, or a Wonderwoman look-alike as Eine Frau, die weiß, was sie will. What they presented now, instead, can certainly wet your appetite: Nicola Kripylo singing and dancing an outstanding version of “Madame Cliquot” (by Anna Depenbusch from 2011, but sounding like one of those crazy 1950s numbers that Marika Rökk could have been seen in), or Florentine Beyer doing a action-packed version of “Das Girl im Spiegel” from Grand Hotel; Hollywood has rarely looked so alluring. Not to mention giant Johannes Krimmel perform a hilariously funny (and highly political) “Ich bin Aldolpho” from The Drowsy Chaperone (with a Hitler joke at the end about the other “Adolf”), or Ngako Keuni singing “Adios” and “Dambala,” the latter a powerful meditation on slavery.

Of course this wasn’t an operetta evening, and many of the 20 year old students probably don’t even know a single operetta title – though their head of department, Prof. Peter Lund, makes them perform one operetta in a ‘closed concert’ version once in the course of their studies. Wenn ja wie viele was not that ‘closed concert’ but a very public first outing at the Uni.Theater in Fasanenstrasse, consisting mostly of musical comedy material from Mozart, Next to Normal, Aida, Follies, Kinky Boots and all the rest of it. (You can certainly call the mix eclectic.)

It’s the last such collage assembled and staged by Prof. Rhys Martin, whose post-modern snippets of philosophy and wisdom I have adored in the past – though they seem a bit aimless here. Certainly when compared with the emotionally more gripping Romeo and Juliette collage the last students presented. (Not put together by Rhys Martin.) 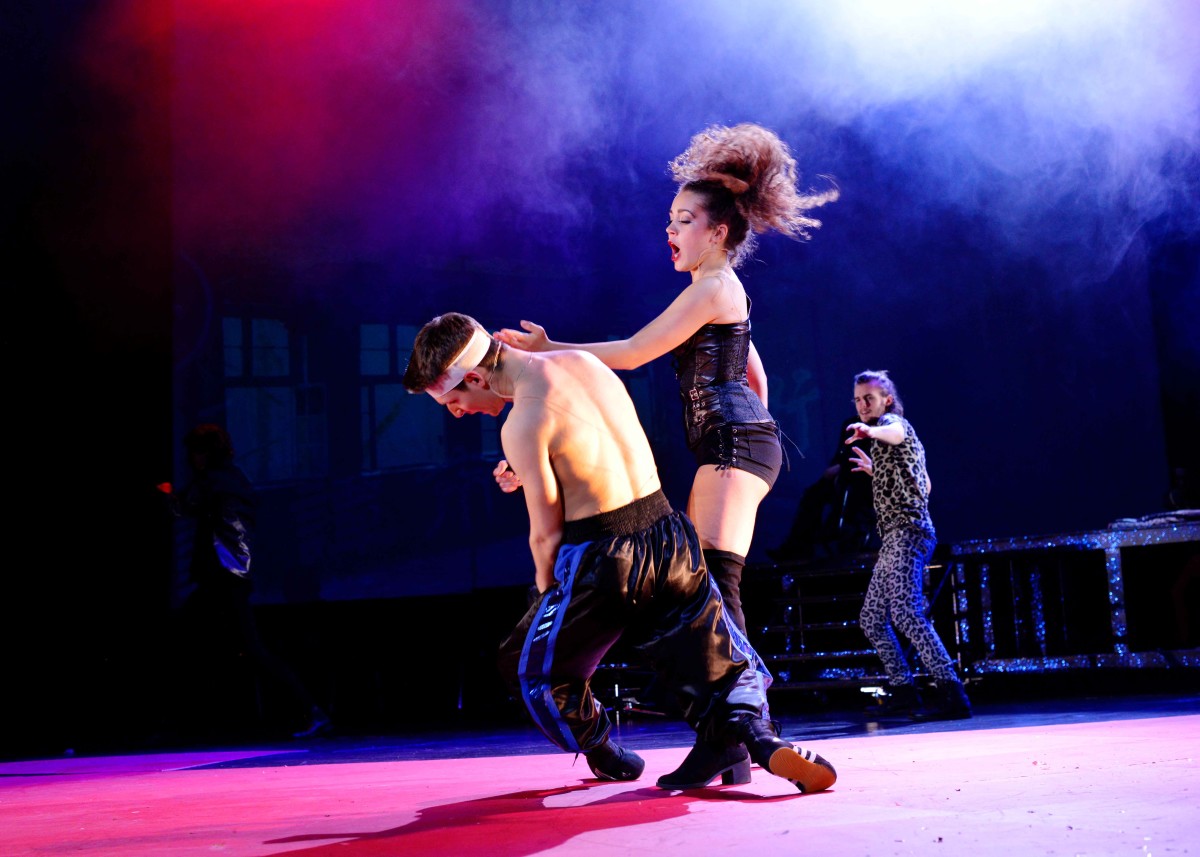 This new show is a meditation on teenage angst and the permanent stress the youngsters are under to always ‘be the best version of themselves’ to make it big in the world. Everything is deconstructed, reduced to short quotations from Shakespeare’s Hamlet to Woody Allen, Peter Handke, Friedrich Schiller et al.

I admit: I like this approach, and I like the pace with which the spectator moves from one situation to another. It’s like zapping through Netflix, you sometimes hit upon amazing things. And one thing is absolutely certain: these nine performers are all amazing! 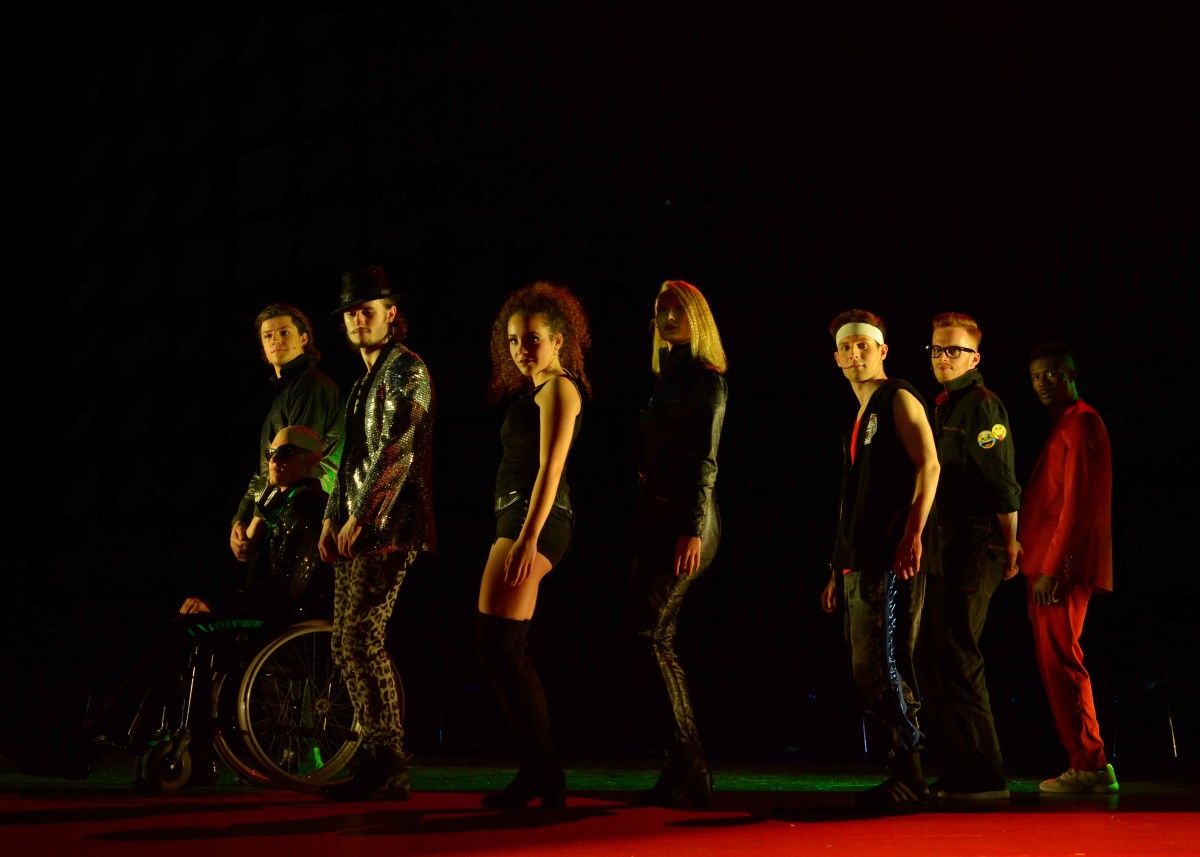 It starts with Ngako Keuni coming out onto the bare black stage, in a red suit and white t-shirt, standing there as an imposing black man, singing (a capella) the song “Dambala.” I don’t recall that there has been a black performer among the UdK students before, and I wondered why: do black people not apply for the UdK musical theater program? Do they not care about musicals? Are there no roles for them? Mr. Keuni discusses this question with a white guy who tells him he cannot play Othello because he’s “not the right kind of African,” he should focus on Porgy and Malcom X instead. They are not “as tragic” as Othello and thus better suited for musicals. When Keuni says that he doesn’t want to play a cripple (= Porgy), Dennis Riffel rolls by in a wheel chair. Reminding us how racism and exclusion of ‘others’ works, in all directions. And when Mr. Keuni remarks that Fiddler on the Roof has “lots of tragic characters” in it, too, someone replies that anyone can play Jews … they are always tragic. But they are also entertaining, so there are musicals about them. (You, as the audience, are invited to ponder upon this provocative statement.) 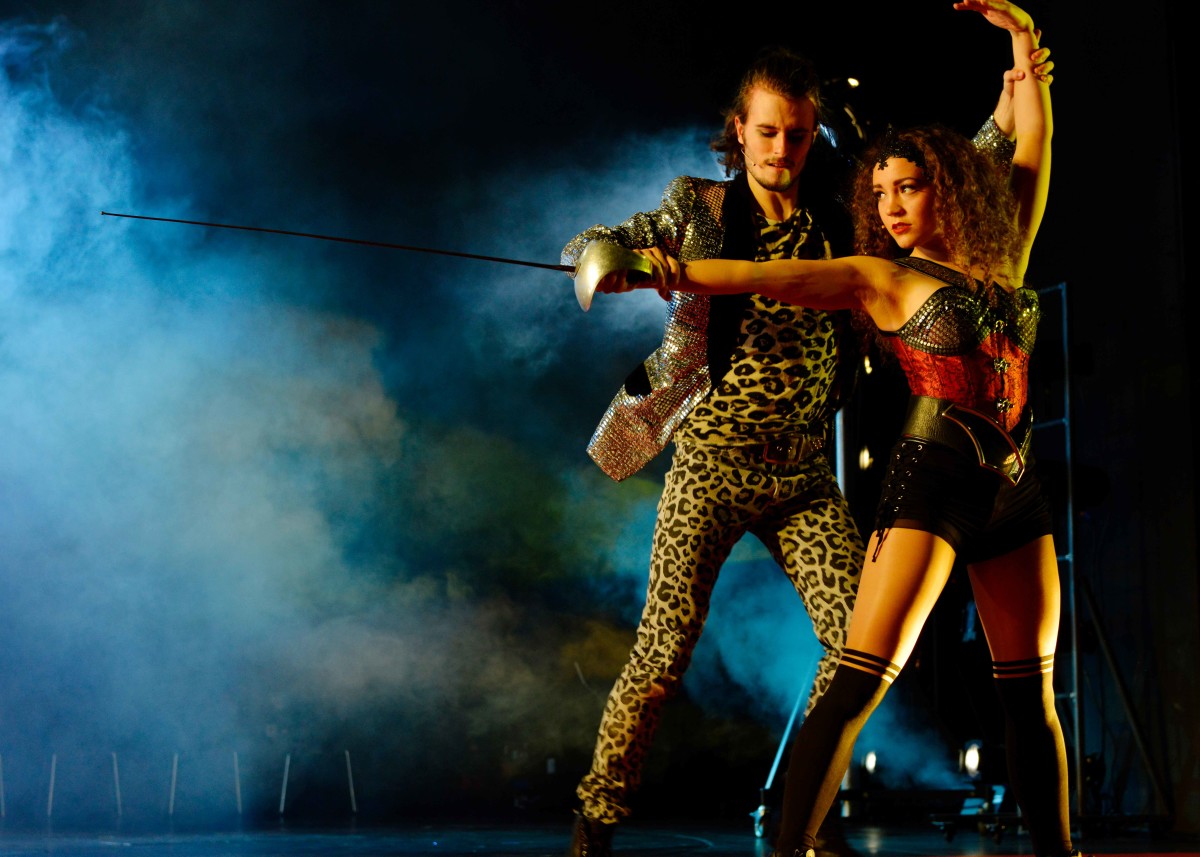 Such statements open a Pandora’s box. And it’s astounding to see how Mr. Keuni faces these discussions on stage, while his white colleagues strut their stuff in leopard suits and (!) underwear, looking like the worst kind of post-colonial idiots. Seeing this in our time of post-colonialism debates is party shocking, party revelatory, party amusing, and often touching. Seeing Mr. Keuni in his red suit, with a unique aura that’s difficult to place precisely, I wondered what he’d be like in operettas. As I said earlier, seeing him as Danilo was a thought that kept flashing through my mind the whole evening, if The Book of Mormon were ever to meet Lehár. With his high powerful baritone Mr. Keuni could easily tackle many standard operetta roles, and bring his magnetic physical presence to the genre. 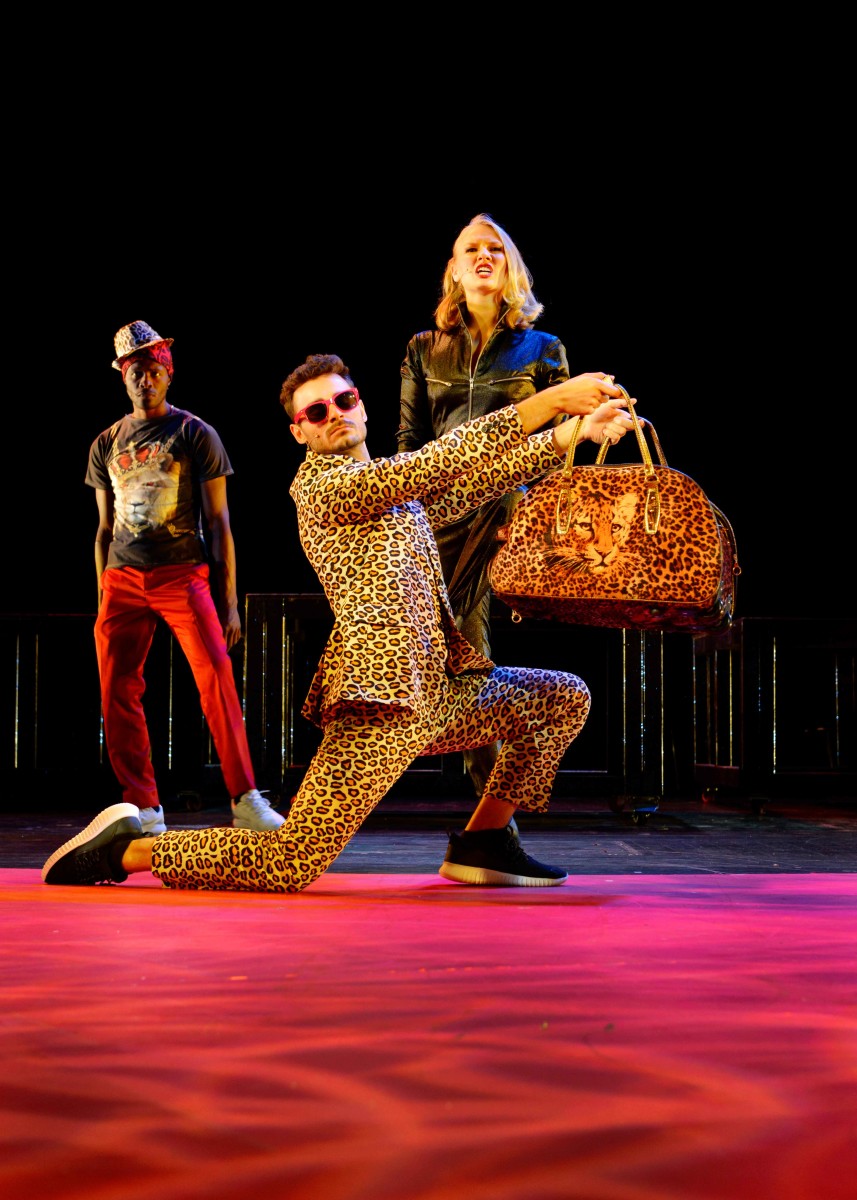 The great thing about this collage is that it allows all nine performers to come across as unique characters, in terms of costume, movement, and types. The two ladies looked like they had both stepped out of a video game, or action movie. They both had powerful yet elegant voices. (Only lacking the ultimate punch for the finishing notes of Grand Hotel, but hey… they are barely 20 years old, there’s time for development.) 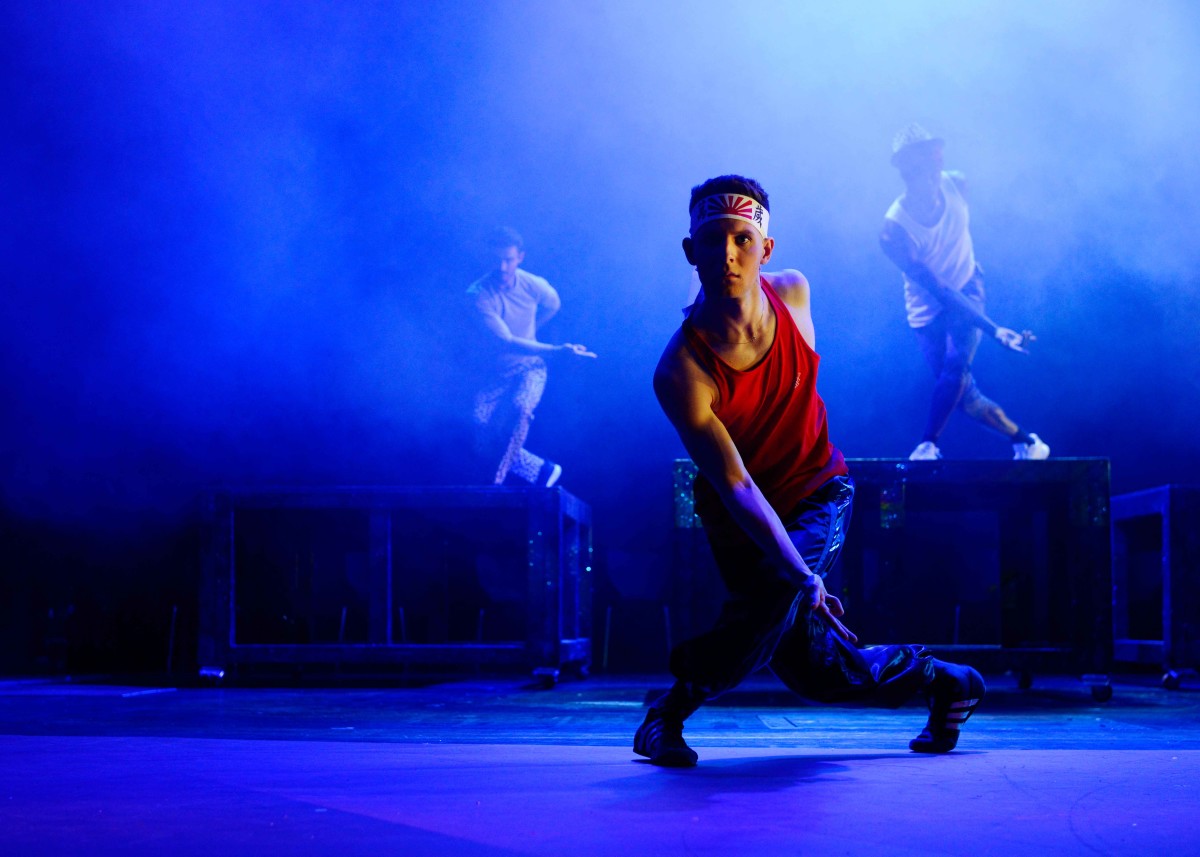 The gents were an equally diverse group. Karim Plett ran around in an Asian martial arts outfit that looked ridiculous and impressive at the same time. He is a born comedian, switching from broad Hamburg dialect and song to Frank Sinatra (and back again) with absolute ease. His “So leb’ dein Leben” (My Way) was vocally striking, yet his absurd sketch about preparing hamburgers (without meat) proved that he could excel in Max Hansen or Curt Bois repertoire one day, as the agile ‘small’ man who shows the rest of the world that he’s Mr. Big.

Tristan Giovanoli (in the leopard suit) sings a ravishing and seductive “Was hat sie nur an sich?” (from The Wild Party), but he too defies easy classification because he’s so many things in one evening, which applies to Florian Heinke as well. (He gets so sing an emotional “Schock danach” from Next to Normal.) Then, there’s red-headed Timo Stacey as a kind of stage manager in a sexy overall and with glasses, on his cell phone most of the time discussing casting and technical problems. He gets to sing “Das kann nur der seh’n, der dran glaubt” from Charlie and the Chocolate Factory. Very strangely he doesn’t have a second solo, but he’s a pretty stunning dancer in the big ensembles. And even without a second solo he’s very noticeable, in the best possible way! [Correction: Mr. Stacey has a second solo after the interval, "Besser werden," a song by Yvonne Catterfeld.] 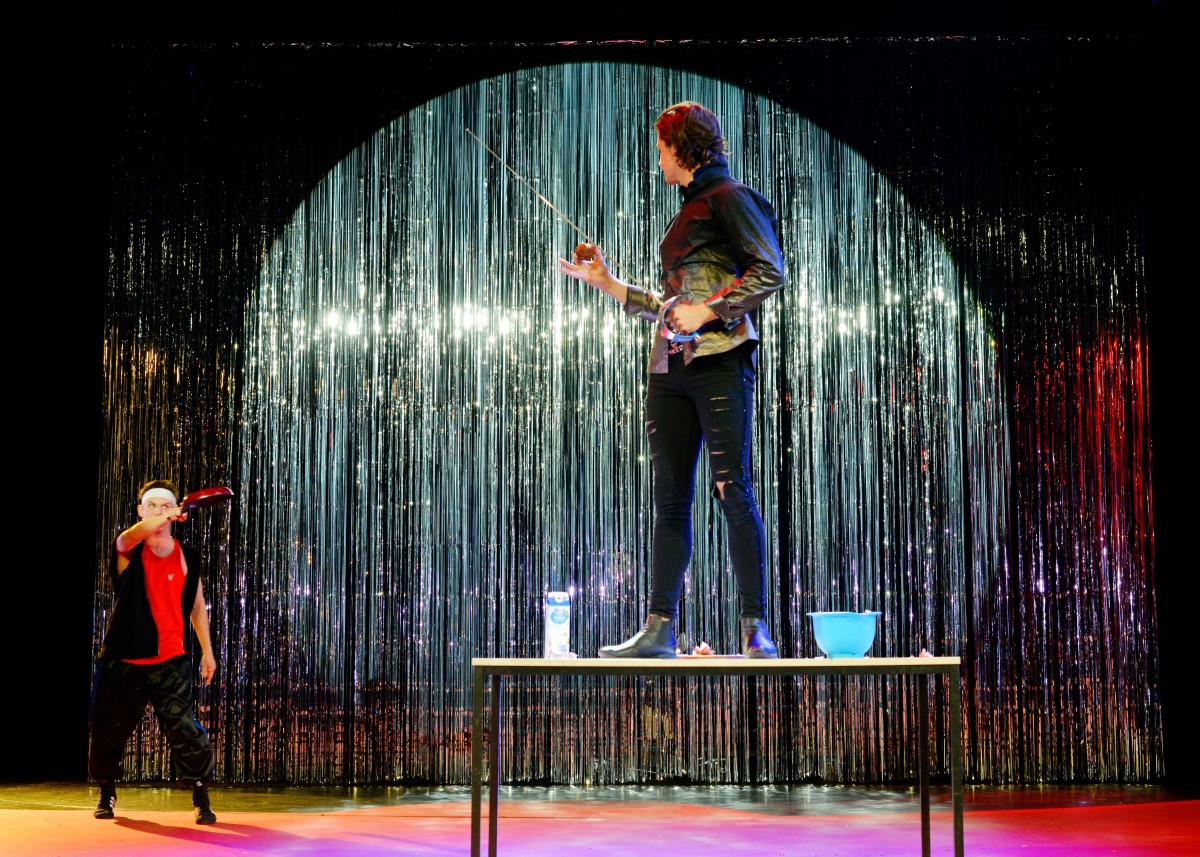 Why exactly Denis Riffel is put in a wheelchair all evening seems a mystery, it’s probably a way of showing more forms of discrimination, though the question of disability is only briefly discussed. Mr. Riffel get’s to sing “Denke an dich” (Losing My Mind) from Follies – but also a glorious “Schatten” from Mozart, about not wanting to be a genius, but a ‘normal’ human being.

In the course of the evening, there is some stunning dancing to be admired. It too made me think that operetta actors should be able to dance in such a way and give a more physical dimension to any operetta performance. (Which was standard, 100 years ago.) 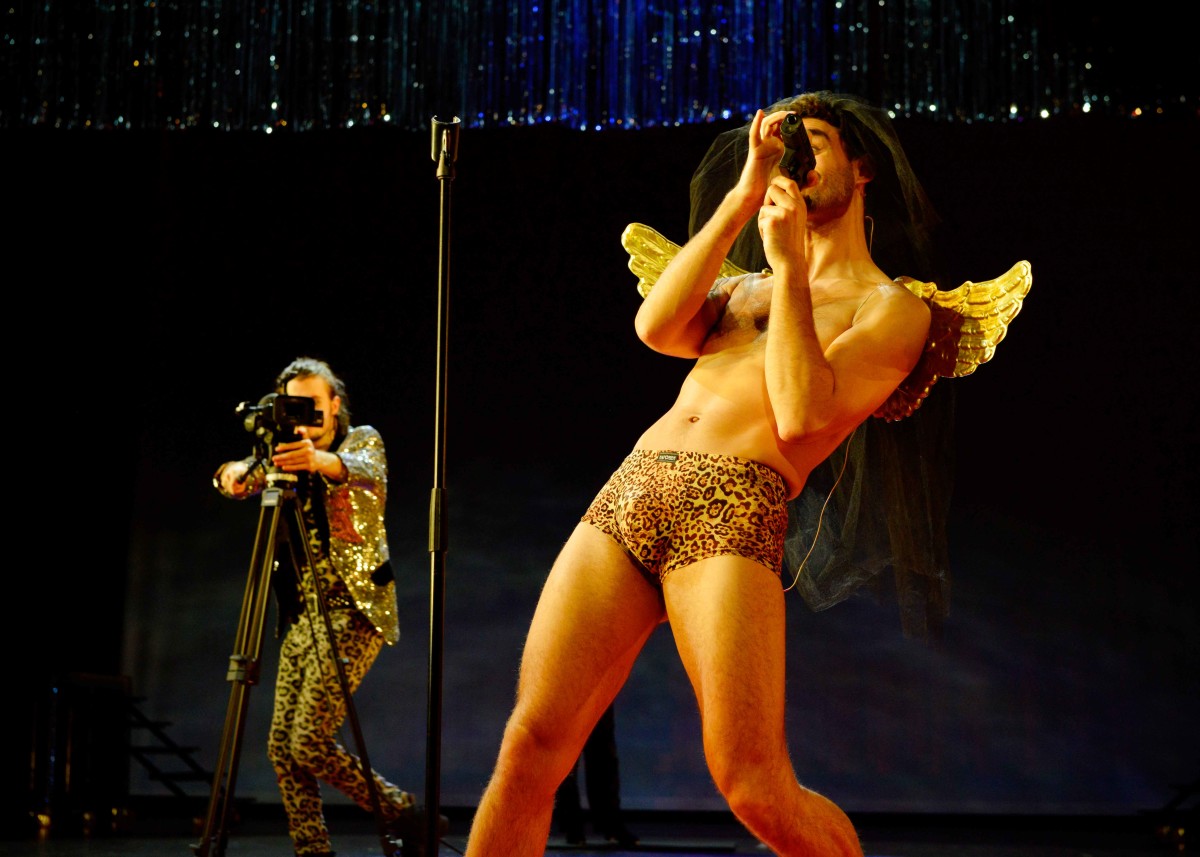 As an encore the group performs the one number that comes closest to an operetta: the famous hit song from Nazi times, “Ich wollt ich wär’ ein Huhn” by Hans Fritz Beckmann and Peter Kreuder, from the 1936 movie musical Glückskinder. (Sung by operetta stars Willy Fritsch and Lilian Harvey back then.)

The UdK student version was awe-inspiring as a performance that plays with words, meanings, and deconstructs the typical Nazi nonsense text – which is not so harmless and banal as many might think. The title of that song was intended for the Adam Benzwi/Anne Sofie von Otter show at Komische Oper (which was cancelled). I assume that Prof. Benzwi, who teaches at UdK, made his students sing this number. Doing so, they demonstrate that they are perfectly capable of updating such ideologically problematic material for a present-day audience. I wish they had included more such repertoire in their collage. But it doesn’t seem to be a repertoire that’s close to their hearts; which is understandable, since they grow up with different favorite shows and movies.

Instead of Adam Benzwi, who usually accompanies his students, there is Hans-Jörn Brandenburg at the piano, doing an excellent job. The only indication that Mr. Benzwi wasn’t the musical supervisor is the fact that song lyrics are often handled with too little care and nuance. But again, the students are barely 20, there is time for future development. 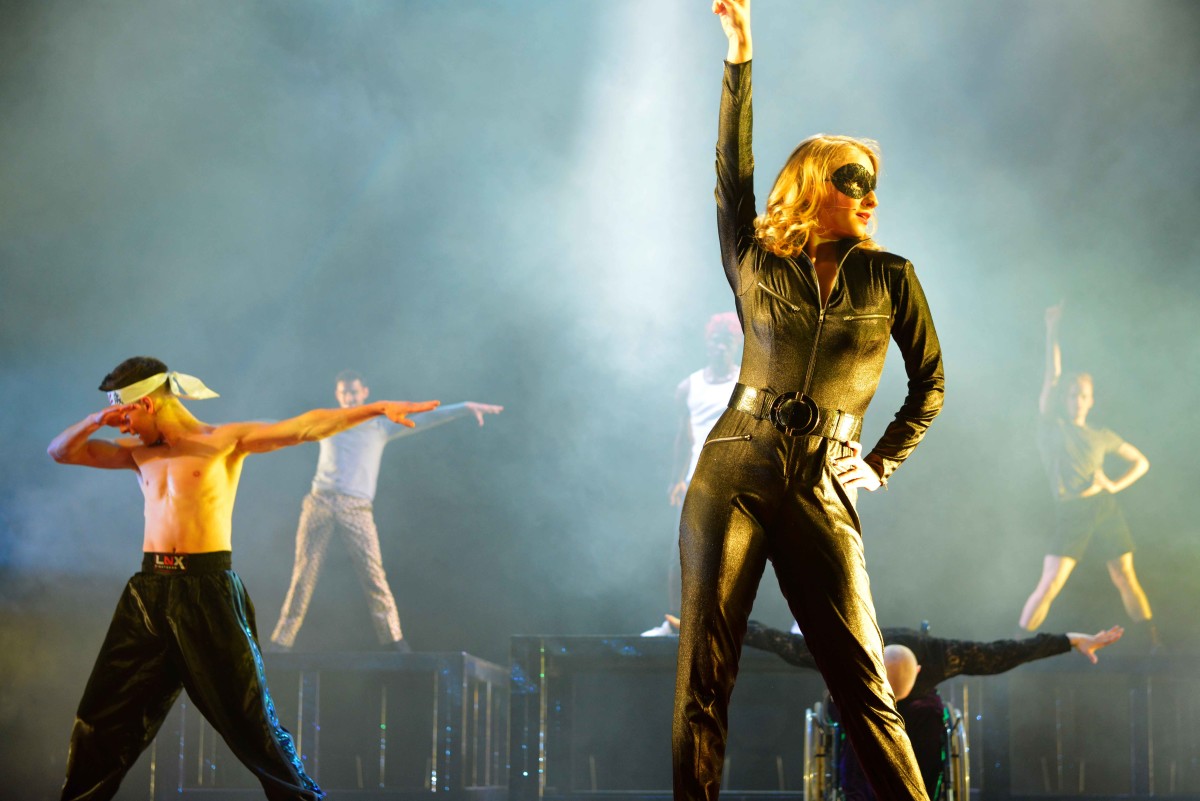 Compared with the students in Osnabrück who I recently heard in Die Blume von Hawaii, the Berlin group seems more ‘adult’ and ‘grown up’ on stage. They are also different ‘types’ with a different style of performing. Personally, I would have loved to see that ‘style’ applied to Blume von Hawaii: Ngako Keuni would be an interesting Prince Lilo Taro, Nicola Kripylo an excellent Princess Laya, and Florentine Beyer a cheeky Bessie.

Who knows, maybe one day the UdK collage will be composed entirely of Abraham material. And if that material is then mixed with philosophical statements such as “online sexuality is real sexuality,” which you hear here as one of many ‘post-modern bla bla statements about lack of orientation’ (“postmodernes Orientierungslosigkeitsgeschwafel”) – then I’d be in heaven.