How very much I wish I could recommend the all new version of Paint Your Wagon in its world premiere at Seattle 5th Avenue, 2-25 June 2016. It has been eight years in the making, and was certainly well worth the effort to fly across the continent from New York to see. But sadly, despite the best of intentions, what’s now onstage is a sporadically satisfying first draft. Were this Boston or Philadelphia in the 1960s, this “pre-Broadway tryout” might have had a chance at getting fixed. But not with this book, staging and casting. 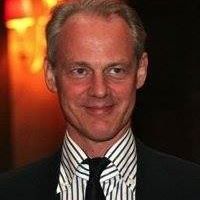 But first up, let me say that the spectacular Lerner & Loewe score, with this new orchestration (August Eriksmoen), tinged with a bit of blue grass and wild west, is still the unquestioned star of the show. From that compliment, I must exempt the two excremental interpolations by Lerner and Andre Previn (“No Name City” and “Gold Fever”) from the film which emerge jarringly as toxic invaders to the eyes and ear. And playwright Jon Marans has done some remarkable work on an almost new narrative structure for the show. He has retained many familiar elements: Ben Rumson (Robert Cuccioli) is the miner who stakes the claim to what (in the film) is called No Name City in 1849. But Rumson now has a back story; he was once a politician from Alabama, but upon the death of his wife and some political misfortune, has chosen to make his way west. (Fair enough.) He’s left his daughter Jennifer (Kirsten deLohr Helland) back east in Alabama to get a proper education. So when Ben Rumson buys Cayla Woodling (Kendra Kassebaum) from the Mormon with two wives, it is Cayla who writes to Jennifer and invites her to come west to see her dad. A nice dramatic touch from Jon Marans, inspired by The Most Happy Fella’s Tony writing to Cleo to come visit Rosabella. So Jennifer’s surprise arrival on the same stagecoach as ‘all them dancin’ girls’ is the new Act 1 cliffhanger. 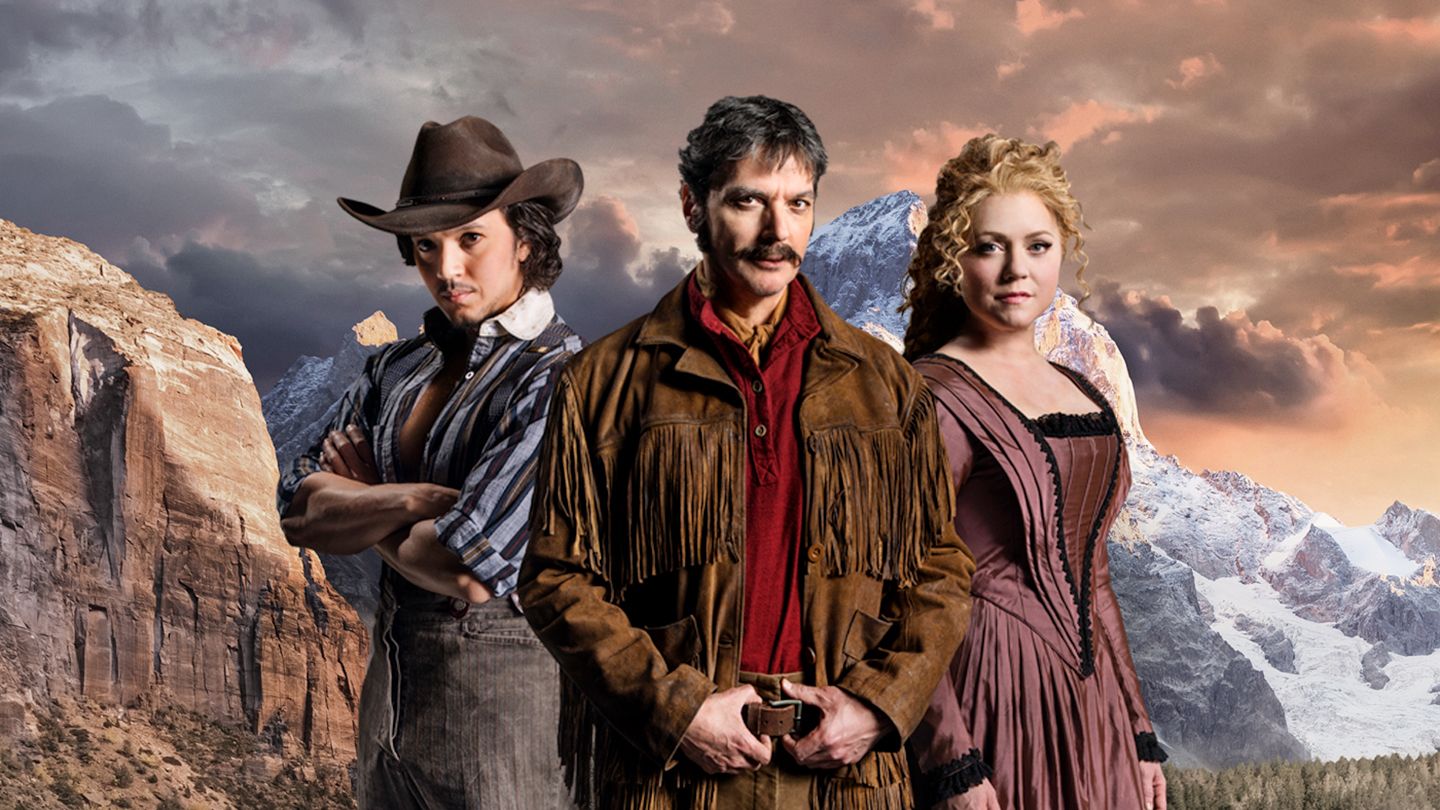 Poster image for the 2016 production of “Paint Your Wagon” in Seattle, at the 5th Avenue Theatre.

However, I’m getting ahead of myself. Act 1 begins with the rousing ensemble “I’m on My Way” with no sign of Ben Rumson or Armando (the new name for the Mexican Julio) who don’t appear until Scene 2 in the woods on a mountain above No Name City. Ben, very much a loner, stumbles across Armando whose horse has died, and who is attempting to carry two enormous loads on his back. Marans smartly defines Rumson as a fair-minded, unprejudiced (i.e. modern) guy. This “meet cute” scene doesn’t ring very true, as Rumson and Armando all too quickly become buddies or (in the film’s parlance) pardners.

So, Act 1, bereft of Rumson’s daughter Jennifer, is now all about the rainbow assortment of gold rush miners. Jon Marans’ very smart, contemporary conceit, and very likely closer to historic truth, is to give us an ethnic cross-section, a Southerner Jake and his black slave, but also two Chinese brothers, an Irishman, a free black man, perhaps native American Indian, a German or Scandinavian, etc. Jake (Louis Hobson) is the fast-talking entrepreneur who builds Jake’s place, opens a bank and dry goods store, etc. Ben Rumson stands up for Armando at Jake’s Place.

Problem is, Act 1 isn’t very interesting dramatically in its manly rivalries and its depiction of prejudice (religious, racial and ethnic), and the conflicts between the miners register as contrived or schematic.

If the people aren’t very compelling, we have the songs to look forward to. Ben has his big character-defining solo, “Wandrin’ Star” before he meets Armando on the mountain. Cuccioli wears an awful beard which makes him look like a stray Russian from Doctor Zhivago; only later when he gets shaved for his wedding night, does this make any sense. “How Can I Wait?” has been very oddly re-purposed, first for Cayla’s escape from her first husband’s clutches, then into a full company, suspense-building number. Lord knows, what is it they can’t wait for! “Whoop-Ti-Ay!” is the wedding celebration for Ben and surplus Mormon wife Cayla, and their duet (no longer solo for Ben) “In Between” is a cute, wedding-night jitters duet. Armando’s first big song is “Another Autumn,” a hymn to the perils of loneliness, but it registers as dramatically static. The Men/Miners give us the wretched “No Name City,” but the song is weak plug filler, adorned by generic choreography from Josh Rhodes. In the program Rhodes notes the peril of following in Agnes deMille’s footsteps, but he offers masculine atheleticism but no context or scant ideas. It becomes rowdy but predictable, forgettable, as well in “There’s a Coach Comin’ In.” I suppose knowing that the long-awaited, lusted-after girls, will arrive as the Act 1 Finale, but somehow the four gals were merely underwhelming, or have I seen too many musical comedy tarts to be surprised? Jennifer’s emergence is the big surprise, but are we supposed to think this “educated” girl is one of “them dance hall girls”????

Act 2 has a similar mix of wins and losses. More generic ensemble numbers, “Rumson City,” the dance hall girls in “Hand Me Down That Can of Beans” are OK, and another bummer from the film, “Gold Fever.” But Marans has some improbable writing: Armando is suddenly an architect and builds himself, Ben, Cayla and Jennifer a house in 30 seconds. And Armando and Jennifer meet hostile, then confess their back stories, and presto, love! They sing “I Talk to the Trees” duet, and they’re in love. Hardly plausible (in the writing or their acting), much less their concealing the obvious from Ben Rumson. More interesting however, Ben sings “I Still See Elisa” (his first wife) to daughter Jennifer, which Cayla (wife #2) overhears. I find this a better use for the song than Lerner’s original placement in Act 1, where Rumson once sang the song, then buys his Mormon bride in the next scene. “Cariño Mio” affirms Jennifer and Armando’s growing love nicely. When Ben Rumson finds out, he punches Armando out, but Arnando pops back up determined yet un-bowed. As the gold runs out, the mood sours and the men gamble their hard-earned monies, three men disguised in white hoods (echoes of the KKK) decide to rob the Chinese of their gold. One of the Chinese brothers is killed, and the perpetrators are exposed and caught. (In real life they’d have got away) Frontier justice is argued….

But playwright Marans has saved his strongest writing for the end of the show. Borrowing the film’s calamitous rain storm and flood, Rumson City and Ben’s new cabin are washed away. As all the miners leave Rumson, the free black man (H Ford) buys the slave Wesley his freedom. “They Call the Wind Maria” (originally extraneous in 1951) is now Ben Rumson’s solo cry of hurt and rage out on the mountaintop. Great idea! Give your leading man the big hit song in the 11 o’clock spot! But the final scene was unexpectedly satisfying. Faced with defeat and destruction, first Armando and Jennifer then Ben and Cayla, all decide to stay and farm the land. And with the largely unknown (but truly great) Lerner-Loewe “Take the Wheels Off the Wagon,” the show closes with a stirring anthem to the future that will become the agricultural paradise of California. Armando demands Jennifer’s hand in marriage from Ben who demurs, then Armando says, “Like it or not, we’re family. Let’s go, Pappy” which tears the house down. For a show often short of real jokes, Armando lands a huge laugh.

So there’s much to like and admire in this new Paint Your Wagon. Especially in the risks Jon Marans has taken.

I didn’t much like Jason Sherwood’s turntable set, with a multitude of thick hanging ropes meant to suggest trees. I did like the huge disc of a sun which dipped or dimmed upstage as required. But Jake’s Place was a flimsy flat (except that it looked cheap and one dimensional, rather than metaphorically flimsy), and Armando’s cabin-front was a joke. Though Cuccioli sings great as baritone Ben Rumson, I much preferred Keith Carradine’s acting in last year’s Encores’ revival, though he was much older…. The two women as Cayla and Jennifer were too much alike. Kendra Kassebaum has a distinctive twangy musical comedy voice. Although the idea crossed my mind they might be so close in age, Ben marrying a women closer in age to his daughter is a very “Alan Jay Lerner-ish” notion, but that was not explored dramatically here. Since Helland had only Act 2 to define herself as Jennifer, I’m not sure the fault is hers or Marans, but her prissy first exchange with Armando yielding to instant love was poorly acted. Judging by the audience applause, I’d say the unequivocal audience favorite, indeed the most fully realized character was Justin Gregory Lopez’ performance as the tenor Armando. A new invention by playwright Jon Marans! But he’s saddled with an odd back-story he confesses to Jennifer in their first meeting, that his family had 50 servants (when she had 2) when they lived on their own farm estate in Califormia, only to see his family robbed, beaten and murdered. Which accounts for his education (unlike Lerner’s Julio), but Armando’s admission of his bleak family misfortune is oddly discarded quickly.

So here we have a spanking “new” Paint Your Wagon. I’d love to see Jon Marans take another crack at re-writing his book, but this production, destined to transfer to Minneapolis, is not one for the ages, or for New York. Few will recall Goodspeed Opera House’s revival in July 1992 which I saw with a weak Jerry Lanning (subbing for an ailing George Ball) as Ben Rumson, and a terrific Marla Schaffel as Jennifer, and a then unknown David Bedella as Julio. In September 2007 Salt Lake City’s Pioneer Theater Company produced a Broadway bound revisal of Paint Your Wagon with new book by David Rambo, with Dennis Parlato as Ben, and Emily Rabon-Hall and Enrique Acevedo as the lovers. For the record, Seattle’s Paint Your Wagon discarded the following L&L songs, “What’s Goin’ on Here?,” the Mormon “Trio,” “Movin’,” “All for Him,” and “Strike!” I had a swell time visiting Seattle, and 5th Avenue Theatre is a monument of Chinese kitsch that is gasp-inducing to behold. Sit close if you visit, sit as close as possible. There are 37 rows in the orchestra, and 27 upstairs, and it feels like more than 2000 seats, and the amplification is woeful.