Peggy and I caught the last performance of Loveland Opera Theater’s Kismet on March 1.  This certainly had to have been the biggest undertaking ever for LOT.  I counted about 20 individual roles along with many others for muezzins, beggars, spies, merchants, townspeople, harem girls, officials and police.  The fact that many of the roles were doubled did not reduce the challenge.  There were also five featured dancers and a fifteen person orchestra, conducted by Nicholas Gilmore. 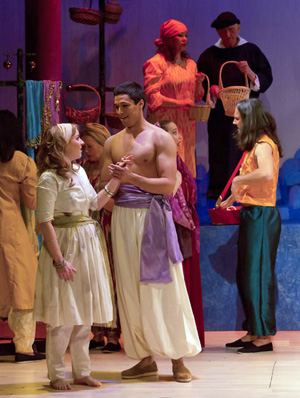 The musical dates from 1953, but the play it is based on dates from 1911, about the same time as Henri Rabaud’s opera Marouf (1914), a work which bears a striking resemblance to Kismet.  Kismet is really an Arabian nights version of the Cinderella story, with a poor girl who ends up marrying a prince – or Caliph.  There is no wicked stepmother, but there is a father, as in Rossini’s version.  This father, however, a poet by trade, is a clever trickster in the Ali Baba tradition.  He fools not only Jawan, the biggest criminal in Bagdad, but also the Wazir, head of the Bagdad police, who is also, as it turns out, the long lost son of Jawan. (Don’t ask.)  The Wazir is the comic villain of the piece, sort of like Koko in The Mikado.  A Broadway insertion is the Wazir’s bored and unfaithful wife Lalume, who wants to spirit the Poet off to a secret oasis for a little off-the-record romance.  Suffice it to say that the Wazir is foiled (drowned actually), the Poet’s pretty daughter Marsinah marries the Caliph, and Lalume is free to run off to that oasis with the Poet.

To me, “Kismet” feels like it belongs in the 1950’s, but critics at that time felt that it was outdated even then, and the critics of the 1955 movie version weren’t much kinder.

Nonetheless the Broadway show was a hit, winning Tonys for Best Musical and Best Actor in a Musical.  The story is amusing enough, but the dialogue creaks sometimes; it is closer to Rodgers and Hammerstein than the wit of Gershwin or Cole Porter or Noel Coward, but without the seriousness or dark elements of Oklahoma! or Carousel or even The Sound of Music.  Perhaps it is supposed to satirize the operetta tradition of an earlier generation, but we are too unfamiliar with that tradition today for it to work as satire or parody.

A scene with the full cast of “Kismet” at the Loveland Opera Theater. (Photo: Darlene St John of Main Event Photography)

I think that the show survives on the strength of the music, almost all of which is based on the music of Alexander Borodin, and particularly his opera Prince Igor.   (The one exception is the catchy Broadway number “Rahadlakum” which is by the show’s creators Robert Wright and George Forrest.  That number, by the way, has absolutely nothing to do with the story.)  And what glorious music the Borodin-inspired numbers are -”Baubles, bangles and beads,” “Stranger in Paradise,” “Night of My Nights,” and “And this is my beloved.”

The LOT production, directed by Timothy Kennedy with costumes by Davis Sibley and scenic design (and lighting) by Peter F. Muller, had a ’50’s technicolor look to it too.

It was very splashy and vibrant; even the sets looked like a children’s pop-up book in delicious purples and reds.  The director handled the small Rialto Theater stage pretty well, both in moving the large cast and chorus around, and in suggesting changing locales by shunting the columns, torch-lights, and furniture here and there.  Even then, the stage was pretty cluttered, but everything moved right along with a lively pace. 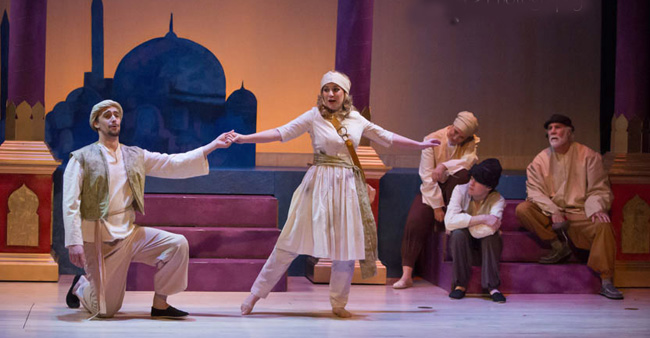 Most of the performers were young and accomplished, and most have experience and abilities in both opera and musical comedy, a necessity since this musical is definitely at the operatic end of the scale in its vocal requirements.  Benjamin Wood headlined the cast as The Poet.  Maybe he looked a little young to be Marsinah’s father, but he was mellifluous of voice and acted well.  Lindsey French, a veteran of last year’s LOT Mikado certainly has the wherewithal for the ingenue role – she is pretty and has stage presence and a voice able to reach high notes with ease.  Personally, I loved Boni McIntyre’s louche Lalume.  She brought a welcome Broadway brash and belt to the proceedings, especially in “Not since Nineveh” and her big number with the Poet, “Rahadlakum.”  The word “rahadlakum” is probably based on “rahat loukoum,” Turkish delight candy; it is a song with pretty raunchy overtones, which Ms. McIntyre made pretty clear.  Turkish Delight, indeed.  Caliph was portrayed by handsome tenor Senhica Klee, a recent graduate of the Lamont School of Music.  When Mr. Klee first appeared, buff and shirtless, there was an audible gasp from some young ladies sitting behind me.  More important, he has a voice of pleasing sweetness, appropriate high notes, and a remarkable ability to float those high notes, pianissimo, as he walks off stage.  Robert Hoch did the comic turn of the Wazir, repeating the fun of his equally comic turns in previous LOT Gilbert and Sullivan productions.

I laughed when the “drowned” Wazir raised his head above the pool with a snorkel for the curtain call.

The principal dancers, Katie Burmaster, Teri English, Cole Emarine, Hannah Escobar and Mykl Navi were very good too, particularly considering the small space that the dancers could use.  Alexandra Brown and Abbie Hanawalt also shook it up as two caliph bride wannabes.  I certainly was not aware that women from Turkmenistan dressed that way; I guess I will have to put that country on my senior travel list.  There were just too many folks on stage to list them all, but everyone seemed to be having a good time.

There was a good sized and very appreciative audience at the Rialto on Sunday, and enthusiastic too.  There were lots of young people, in fact people of every age: it was heartening to see.  LOT’s performances came when the weather had turned cold and wintry again, and Kismet proved a good, strong tonic against the winter blues as Donizetti’s work had proved a pleasant elixir at the month’s start.  Congratulations to Juliana Bishop Hoch’s plucky company for taking on such an ambitious show.  Now how about one of those underperformed operas or operettas that Colorado audiences flocked to in the early years of the State?