I came upon this grand 1892 poster this week… I didn’t know anything about the show, my experience of the Porte Saint-Martin comes several decades earlier. So I had a wee peek. 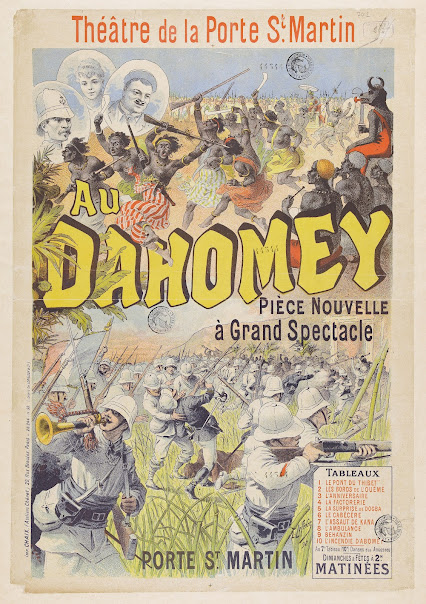 The theatre critic François Oswald was the manufacturer of the piece. He took an older piece, La Légion étrangère, a simple and conventional tale, with conventional characters, and re-placed it in the topical setting of the day. Foreign legion hero with military father and nasty rival for the hand of the ingénue … certain elements of The Desert Song!

A French newspaper illustraition with scenes from “Au Dahomey”.

And, of course, lots of topless Amazon ladies, Taillade in blackface as the African king Béhazin, and a broad comic element provided by Dailly as the little feller of the piece. 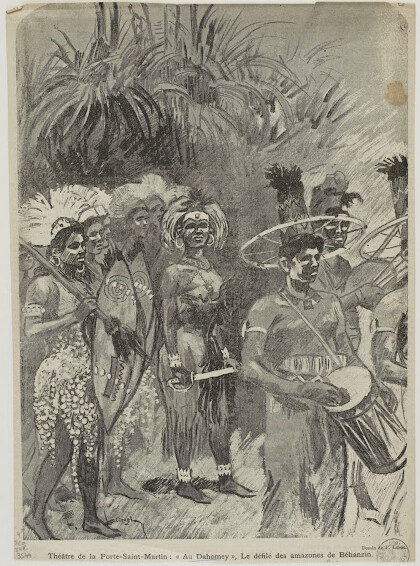 A scene from “Au Dahomey” as seen by F. Oswald in a newspaper drawing.

Another wondered why the ‘Dahomian’ hordes were sort-of brown instead of black, and tongue-in-cheek questioned the producers’ lack of ‘ethnographie’.

For those who wish to know more, the making of Au Dahomey is related by ‘Willy’ in his Soirées perdues … but I have a feeling its poster might have been the best thing about it!

For more information on the English language In Dahomey, click here. And for Kurt Gänzl’s original version of this essay, click here.