Aye, you might very well ask: why is a recording of Rodgers & Hart’s “American Musical Comedy” Dearest Enemy coming straight from the Emerald Isle, with the Orchestra of Ireland playing under conductor David Brophy, and with a cast mostly composed of promising Irish talent? Surely, it’s not because Mrs. Murray’s husband, in this tale of the American Revolution set in Manhattan 1776, is originally from County Armagh; or because Mrs. Murray’s niece Betsy, the youthful heroine of this patriotic romp, is Irish. Or is it? 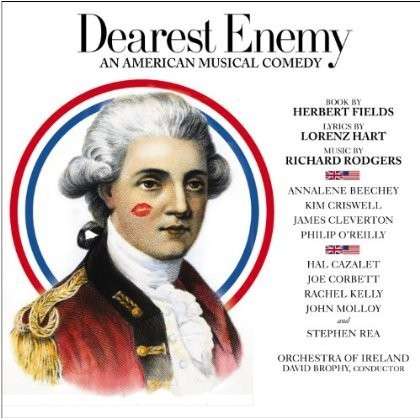 The CD cover of the new “Dearest Enemy” recording.

Whatever the reasons – cheaper talent, cheaper recording facilities etc. – it’s a relief to hear a ‘classic’ Broadway show from 1925 performed not by the usual suspects of such revival enterprises, but with a fresh group of mostly unknown artists. So, instead of the eternal Rebecca Luker, for example, here there’s the dashing young Annalene Beechey as Betsy Burke, sounding gorgeous and winning in each and every song she is given. And here, too, is the equally dashing James Cleverton as her love interest, Captain John Copeland.

For those who don’t know Dearest Enemy: it’s “a native operetta that went so far as to suggest that proper colonial women were interested in sex”, as Gary Marmorstein writes in his brand new biography of Lorenz Hart. It’s also the first hit show written by the new team of Rodgers & Hart. In a theatre climate dominated by old world type operettas, such as Romberg’s The Student Prince and imports from Europe (Emmerich Kalman et al), Rodgers & Hart wanted to offer something decidedly “American”. And what could have been more American that the story of the famed Mrs. Murray, holding up British soldiers with a tea party given at her house in Manhattan, just long enough so that General Putnam’s soldiers down at the Battery had time to march up north to unite with General George Washington’s forces, without being attacked by the bad British? Using some of the standard musical formats of operetta – dashing soldiers singing marching songs, maiden’s choruses à la The Pirates of Penzance, grotesque war heroes that could also have come straight out of a Gilbert & Sullivan operetta, sentimental love duets sung in the moonlight – the new team tried to come up with something novel; a definite emphasis on “sex” (see above) being one of the novelties in this revisited “operetta land”. The mix of elements is fascinating, marking the important transition of American Operetta to modern musical comedy, a transition that was simultaneously and successfully also tried by the likes of Jerome Kern and others.

It’s not that Dearest Enemy hadn’t been put on record before (it has!). But this version tries to reconstruct the original version, as far as that’s possible, given that much of the original orchestral material has been lost and needed to be reconstructed.

If the following criticism sounds harsh, it doesn’t want to devalue the recording as such, but point towards the frustrating bits that keep it from being an all-time great recording – which it should be, could be, and which Dearest Enemy absolutely deserves to get!

The main problem, in my opinion, is the producer of the recording, who obviously has no idea what a “native operetta about Colonial women interested in sex” might sound like. Certainly not like a Lieder recital of Schubert. Instead, a show such as Dearest Enemy needs contrast, slapstick, character. And: fun, fun, fun.

As lovely as Annalene Beechey sounds with her light soprano voice, and as catchy as many of the tunes in the score are – conductor David Brophy has a hard time getting the vaudevillian style even remotely right. All numbers sound more or less the same under his baton. Also, his chorus of ladies sounds surprisingly uninvolved in the opening number, when they are threatened to be “compromised” by the invading British (“Hooray, hooray, we’re going to be compromised! A soldier can’t be satisfied, he always looks for more! A modest maid can make the mildest young mister simply wild! Wild! Wild!”). And they are far too unfunny when they show up in front of the British all made “ugly” so that the soldiers won’t find them desirable (“Your beauty is your surety, Security for purity”). It’s a romp, for goodness sake, you should perform it as such.

The same is true for the comic duo Harry/Jane. When they sing the obvious comedy duet “Sweet Peter” – about Peter Stuyvesant – and his wooden leg (“Naughty Peter, he would greet her [i.e. his wife] with his Boom! Boom! Boom!”) that shouldn’t be performed in the same romantic fashion as the Betsy/John numbers, right?

Well, sadly that’s exactly what Rachel Kelly and Hal Cazalet do. They have great voices, but they’re totally unsuited for this material.

The one star performer on this new recording is Kim Criswell as the famed Mrs. Murray. Criswell is a superb artist with an equally superb voice, heard on my classic musical theater recordings. But, her voice sounds far too youthful and fresh to pass – on disc – as the maternal Mrs. Murray. You can hardly tell her apart from the other girls, and that makes the story … well, not work. As delightful as Criswell often is with the lyrics, especially with the song “The Hermits”, she’s not the stand-out performance needed here.

With all of this said: this new version is in no way (!) inferior to the various reconstructions of 1920s shows available on CD elsewhere. But that’s no reason to not expect a little bit more. Certainly, when you consider the Irish and their renowned sense of humor. I’m sure they have it in them to come up with a rousing Rodgers & Hart performance, also on disc.

Aye, I certainly hope to hear more of Annalene Beechey. She’s a dreamy operetta heroine, that should grace more operetta recordings in the future. And, aye, get a new conductor and producer, and start over again with more shows like this.