Frank Wedekind’s Frühlingserwachen (1891) is a ‘famous’ play. ‘Famous’ in a Lady Chatterley’s Lover way. There’s nothing like some healthy banning and censoring to help a work to become ‘famous’. Personally, I don’t see anything censor-worthy in it, perhaps because I was borne into this world fifty-five years later than the play, and am of a reasonably unfettered turn of mind, but anyway, the play with its ‘naughty’ ‘forbidden’ subjects and ‘rude’ words made its name and fame at the turn of the century, became a subject for devoted study, and ultimately reached the apotheosis of being several times made into a musical. The most recent, American, version (Sheik/Sater) has done well. 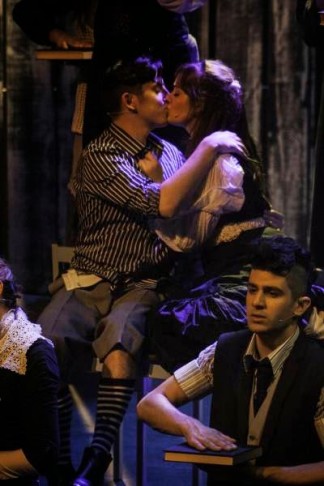 I had never seen it, until today, when I headed to Christchurch’s Court Theatre to see the graduating NASDA (National Academy of Singing and Dramatic Art) students of 2014 play this version, and the wise ones predicted that I might not like it. I wonder why. The only reason that I would ‘dislike’ (or as theatricals say, ‘hate’) a show would be if it were incompetently written, directed, performed … and this was none of those.

So, has Frühlingserwachen made up into a satisfying musical? By and large, yes. I was uneasy through the first part of Act I, which seemed too naïve, too black-and-white … but when the best songs of the night (‘The Word of your body’ and the splendid ‘The Dark I know well’) arrived, one after the other, we moved into a different and much more warmly three-dimensional part of the show, which gave the performers much more into which to get their teeth. The last stages of the show verge on the melodramatic, but that is Wedekind’s fault. 19th century audiences, like today’s TV Midsomer Murders-watchers, were accustomed to piling up the bodies, and death by abortion was not so unusual…

The score, splendidly lavish in its use of ensembles, popped out its couple of stand-outs.

(Writing this, next morning, they are the only two I really remember.) And even if the lyrics included American slang which sat as uneasily with the Anglo-German text as the odd mix of male hairdos did with the period costumes, the best bits were grand.

Of course, it helps a text and a score hugely if they are well, aptly and even exceptionally performed. Which they were. In spite of the problems inherent in having a student cast playing mostly 14 year-olds and adults. 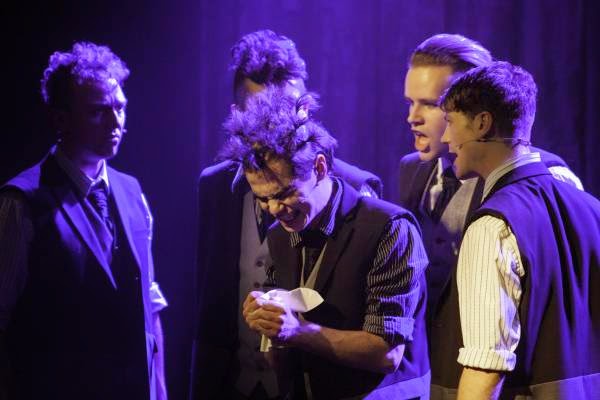 Moritz (Adam Spedding) finds puberty more than he can cope with. (Photo: NASDA)

The central character of Melchior (age 14), was quite beautifully played by Josh Johnson. His acting was utterly believable and touching, his still developing singing voice brushed the falsetto notes of his last song amazingly sweetly, and he let rip with surprising steadiness and vigour on ‘Totally Fucked’. OK, he didn’t seem quite 14 … but neither did anyone else. And it didn’t matter. It was just a splendid, heart-warming piece of musical-theatre. A winner.

His sweetheart, Wendla (age 14), was played by Emily Burns. I last saw Miss Burns playing (well) a Caribbean goddess with a belt number in Once on this Island. This was incomparably better.

She invested the young girl with an enormous, real naivete and sweetness, without for a moment slipping into the ‘traditional ingenue’ manner, in a performance of truly lovely quality.

Of course, a strong, warm and wide-ranging chest voice helps. But it was her drama that got to me: her cry as she was carried off by the abortionist was both horrible and memorable. 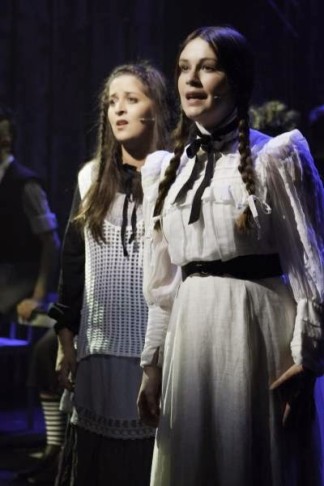 Ilse (Imogen Prossor) and Martha (Becky Button) give forth the most dramatic number of the evening. (Photo: NASDA)

As I’ve already said, my favourite number in this show was ‘The Dark I know well’ and it got a magnificent performance from Becky Button (Martha) and Imogen Prossor (Ilse). Miss Button (another ex-Caribbean goddess) acted the role of the father-abused Martha with moving effect, and sang her part of the duet impeccably. And Miss Prossor … yes. A very big ‘yes’. Just occasionally a young performer leaps out to me. I can’t always pick the whole reason why, but anyhow Miss Prossor is one of these. In the old days, I would have taken her on as a client. She has ‘it’. She also has a rich, full mezzo-to-alto voice, which she uses perfectly, and her acting simply exudes the quality of warmth. She had impressed me greatly in the previous show, and I was delighted to see her confirm all the very-good that I had thought of her then. She was perfectly cast as the liberated Ilse.

Amongst the other boys, Adam Spedding played the screwed-up Moritz. I am not sure why he had an “Uncle Tom’s Cabin” Topsy hair-do; I found it terribly distracting.

He looked like a misfit from the start, behaved liked a misfit … perhaps this is how the role is written? But Moritz doesn’t come over as sympathetic, as the other youngsters do, he just comes over as screwed-up.

Spedding sang and danced with grand energy, as did the other lads (I was irresistibly reminded of Half a Sixpence and ‘Money to burn!), and Zak Enayat and Olly Humphries had a very special moment in a homosexual reprise of ‘The Word of Your Body’.

Strangely, the young folk who played the adults of the piece somehow got nearer the ‘right’ age than those playing ‘down’. The women were impressively costumed and wigged — Frau Gabor’s wig was superb, and Wendla’s mother’s abortion-night outfit made a fabulous black-hag picture – and the men? Well, Simon Watson played all eight of them, most efficiently and clearly. 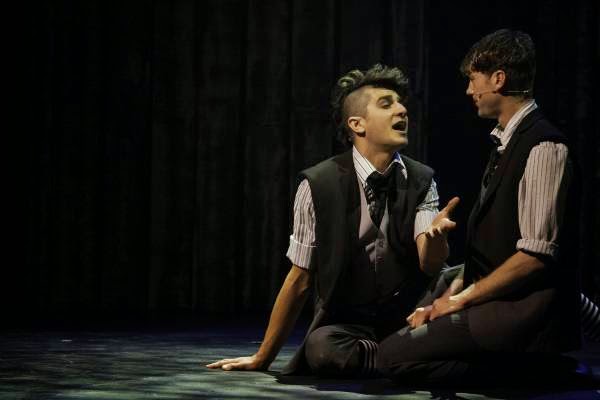 Hanschen (Zak Enayat) and Ernst (Olly Humphries) discover that not all ‘awakenings’ are the same. (Photo: NASDA)

NASDA, as usual, provided all the trappings for their students – 8 piece orchestra, clean unfussy direction and choreography (original or carbon-copied I know not, but it worked), a clever set (ditto) and excellent costumes. But I’m still a bit confused by the boys’ hair.

As I said at the end of the show – and after a night to think on it – 7 out of ten for the show, 9 point something for the performance … extremely glad to have seen it. And the young performers.