The statistics are out for the number of musical theater performances in Germany during the 2014/15 season. They were published by the Bundesverband der Theater und Orchester. The surprising aspects are not that Zauberflöte is still the most beloved and most performed title in the opera category (371 performances), followed by Traviata (334), Carmen (315) and Hänsel and Gretel (231). No, what’s interesting is that after this: all places are occupied by musical comedies. There, the commercial Stage Entertainment productions take first place, because they are performed 8 times a week: so Mamma Mia and Phantom come before My Fair Lady and West Side Story, even if these are the eternal evergreens at state subsidized theaters. The real revolution comes further down the list, though, and it concerns operetta. 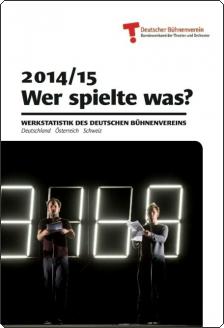 The latest issue of the eyra book of the Bundesverband der Theater und Orchester, with the 2014/15 statistic.

While the Stage Entertainment shows all look alike, being clone productions imported and exported in the usual Broadway fashion, the titles performed at state theaters offer highly varying individual interpretations. And while there were 31 new and different Traviata productions, and 23 Figaros, there were 13 different new Rigolettos, Rosenkavaliere, Freitschütze – and 13 new Fledermäuse and Weiße Rössl.

What’s interesting is that, apparently, the undisputed top-2-combination Fledermaus and Lustige Witwe has be substituted by Fledermaus and White Horse Inn. Which is great to hear, that after the eternal over-kill of Merry Widow productions at practically every opera house in Germany and Austria you now get the return of the jazzy 1930 Rössl, as a representative of a later operetta from Berlin, instead of the Vienna Waltz ideal which dominated the scene for so long.

Soon, the copyright for various popular shows runs out – Lehar and Kalman most importantly. (While Rössl is copyright-protected till 70 years after the death of its creator Erik Charell, who died in 1974, with Robert Gilbert having died in 1977. So start counting.) That copyright end might change the statistic again, in the near future. But for the time being, let’s welcome this shift at the top. And let’s hope that there will be more shifts, e.g. bringing Paul Abraham back into the “most played” category too, or Oscar Straus.