The Hungarian “Monarchia Operett” (Monarchy Operetta Company [1]), under the artistic direction of dance comedian and costume designer Péter Erik Kollár, started a very large venture last year. The goal was to stage their first full-length operetta production. The operetta company in question has been a musical theater formation for more than 10 years. Its focus was now specifically redirected to operetta, which as a genre was declared “Hungarikum” [2] in 2013, “nurturing the traditions of traditional Hungarian operetta playing,” and preserving the supposedly “classical values” of the genre. [For more information on this political concept, click here.]

Poster for “Sissi” as promoted by the Monarchia Operett.

However, the artistic management feels that their mission is to give space to young, emerging operetta actors on the one hand, and to make an attempt to renew operetta-playing in line with today’s age and needs. The best example of the latter are the various thematic evenings [3] staged in recent years. Various two-act galas were executed with a strong emphasis on contextualizing songs and operetta composers, librettists, quality singing, dancing, and visuals, especially the imposing costumes.

Now all this has been merged into another project, which is nothing more than a 21st-century adaptation of the operetta Erzsébet, presented on January 5, 1939 [4], at the Hungarian Theater (Budapest).

So the Monarchy Operetta and its creative team have reworked material little known to (most) of the audience. On the one hand, this gave the creators a lot of freedom. But staging a lesser-known work, especially in the case of an operetta, is by no means risk-free. In the case of a piece that fits well with the Hungarian cult of Sisi – and other musical theatrical works (Elisabeth musical, etc.), exhibitions, historical educational programs – a change of title was also made from a marketing point of view: instead of Erzsébet, the show is now called Sissi, a magyar királyné, i.e. Sissi, Queen of Hungary. 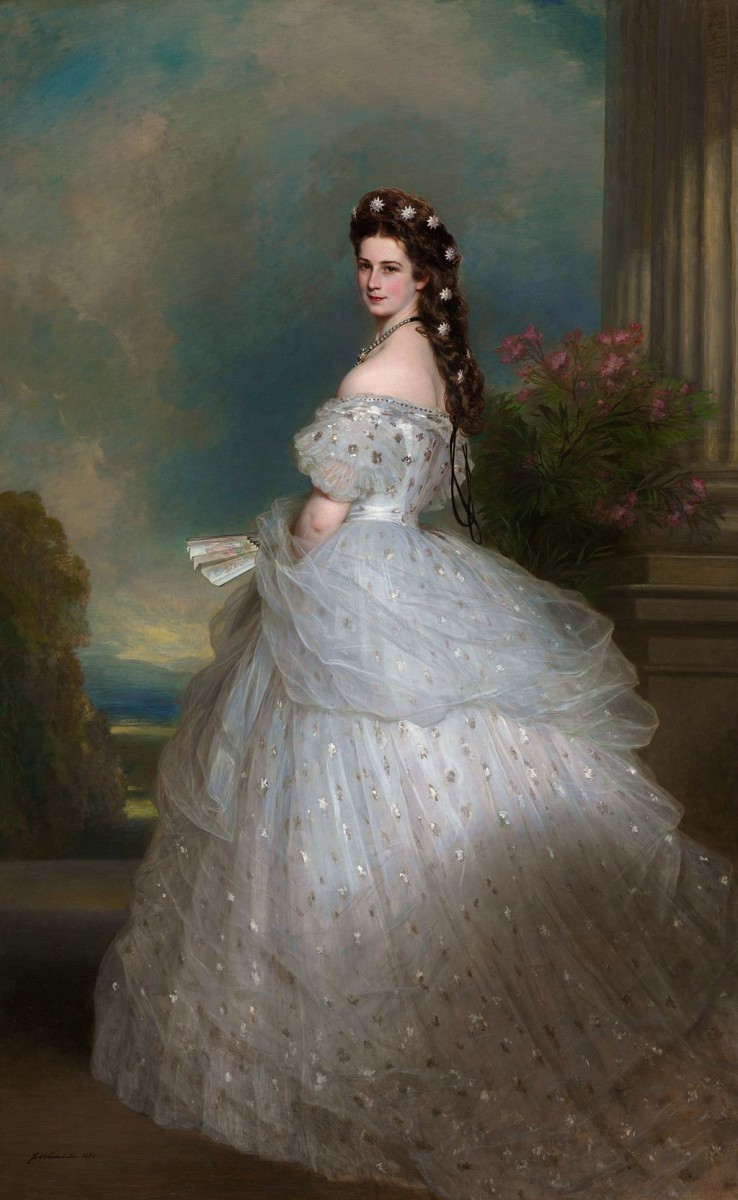 Elisabeth of Austria, as painted by Franz Xaver Winterhalter, 1865.

In doing so, the company also hopes that the performance will simultaneously transcend the 1939 version, both in musical material, at the level of choreography, in dramaturgy, and the visual world.

The new “Patriotic Song-Play” – as a newspaper called it [6] – is staged by Gábor Kerényi Miklós, also known as KERO, one of the most omnipresent and influential stage directors of Hungarian operetta in recent decades, former director of the Budapest Operetta Theater, but kicked out there after a very nasty #metoo scandal. [For more information, click here]. KERO relocated to Russia, but seems to now be back, as if nothing had ever happened. 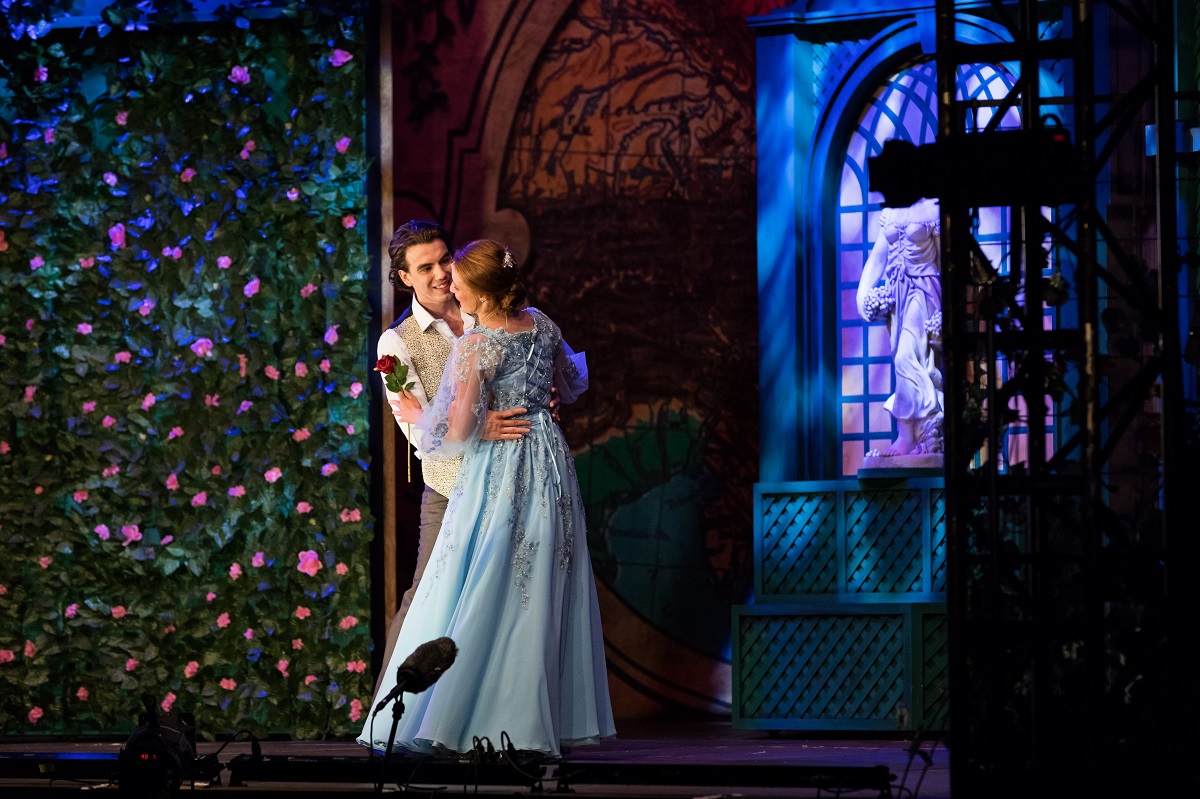 The premiere of the show on June 12, 2021, was presented in the courtyard of the Royal Castle of Gödöllő. [7] The choice of venue is interesting, as the Hungarian state once bought the residence, renovated it, transformed it – and then gave it to Franz Joseph I and Queen Elizabeth as a coronation gift. After two performances, the production was then presented on June 18, 2021, at the 33rd Kisvárda Festival of Hungarian Theaters. [8]

At the heart of the new dramaturgic concept is Queen Elizabeth, Sisi, played by prima donna Victoria Denk, who is both very suited for a role of this caliber, both in terms of her acting and singing. The story is set in the period before and after the Compromise, the ideological opposition of the Austrian court and the Hungarian nobility comes to the fore. In addition, the creators did not forget to deepen the Hungarian domestic political context, as the views of Lajos Kossuth and Ferenc Deák and Gyula Andrássy stand out clearly.

Both the inner and the outer contrasts are suitable for composing a scene full of tension. However, the main cause of complication after all is love. But love and political threads go hand in hand in this libretto.

The approach of the married woman, Queen Elizabeth and Count Gyula Andrássy (Dániel Árvai) causes exciting moments, and at times, the duet of Ida Latkóczi (Elvira Haraszti) and Kálmán Neszmélyi (Szabolcs Kádár) or Stefi (Szilvi Szendy) and Flórián (Miklós Máté Kerényi) bring tears and smiles to their faces. However, the relationship between Sisi and the Count on stage – apart from the kiss – can’t deepen as in the case of the two couples mentioned earlier. Moreover, a third couple finds each other, between Countess Waldeck (Marika Oszvald) and Kossuth’s supporter Ádám Latkóczi, Ida’s father (László Egri). The piece beautifully commemorates Queen Elizabeth, tells her love for the Hungarians, and reveals to us her inner struggles and worries (such as her relationship with her husband, or her conflict with Archduchess Sophia), which is known from contemporary “rumors”. Kálmán Neszmélyi is a Hungarian revolutionary who has come to the Viennese court, whom Ida is faithfully waiting for, to whom he has used the Florian of Austria, who has been on Hungarian soil for many years, to send letters to his love. 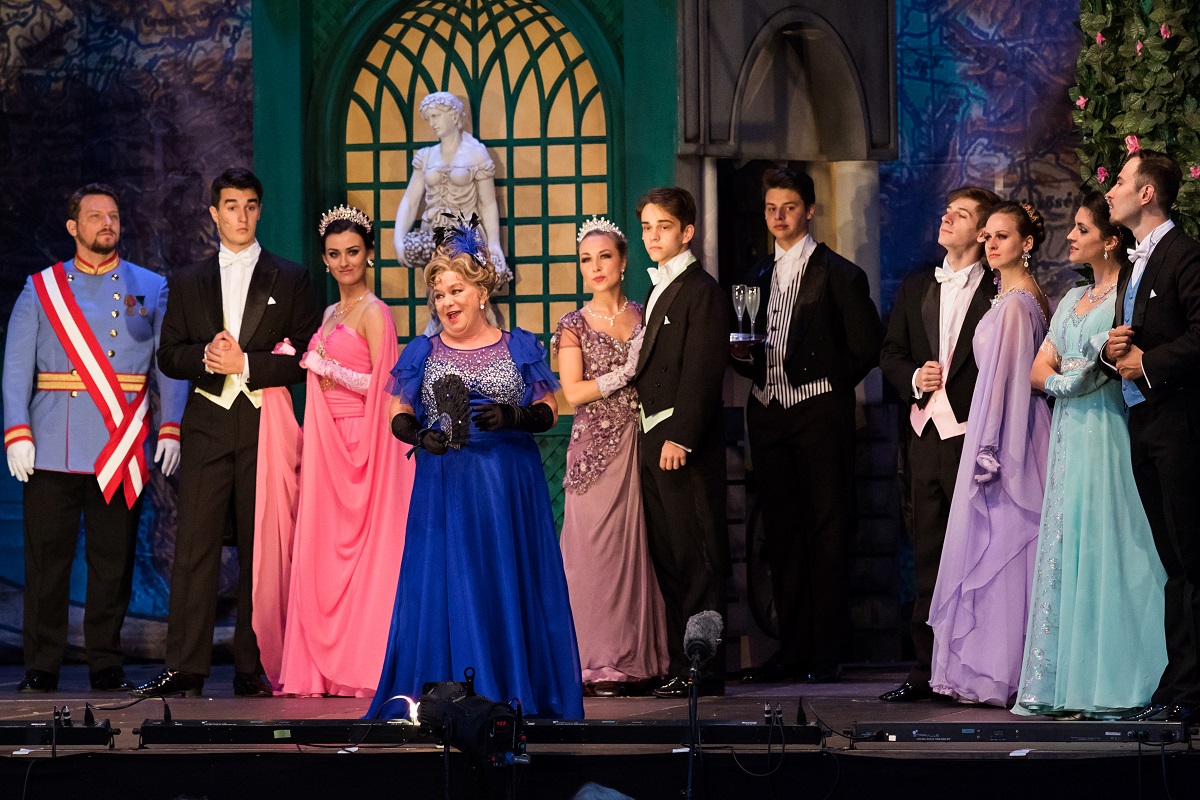 Flórián, the character of the dance comedian – who also likes Ida at the beginning – is suitable for the use of Hungarian-German word jokes, for the formation of misunderstandings into place and character comics. However, Stefi flirts with Kálmán, and Ida is deeply offended by the man. Ida then uses Count General Axamethy (Károly Peller) to make his childhood love jealous, but the general is also meant to explore the Hungarian revolutionary aspirations in the background, so politics and love are both complicated. Queen Elizabeth can resolve conflicts, lovers can give themselves to each other.

Elizabeth’s music is praised by various critics – since jazz music also prevailed in operettas in the 1920s and 1930s – the Hungarian theme and sound, as well as Huszka’s work as a composer: “Inventive, the score is noble, touching and effective, the orchestration is free from all hurtful finery, frills, the work of a true poet. There are a lot of melodies in it and the whole has a Hungarian style [...].” [9] 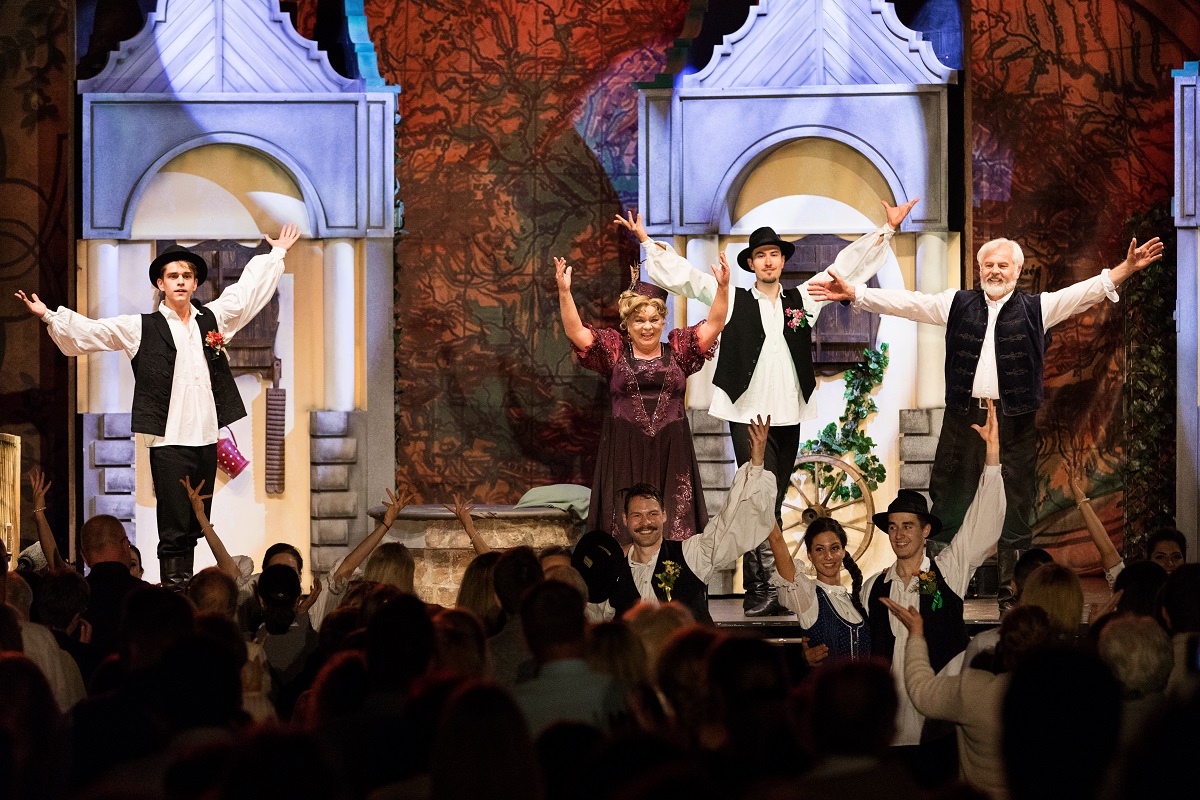 The composers restructured the musical details of the operetta, omitting more, and incorporating details from Huszka’s other, including the Gyergyói bál [Ball of Gyergyó] (premiere: 1941); Mária főhadnagy [Lieutenant Mary] (premiere: 1942); from his works Szabadság, szerelem [Freedom, Love] (premier: 1955), which has undoubtedly benefited the musical material. And it should also be noted that the act condensed into two acts benefited from the updating of dialogues, the “dusting” of the language of jokes. The key song of the piece, and this time a touching moment, is the poem of Sándor Petőfi entitled Szeptember végén [At the End of September], which can be heard in the interpretation of Erzsébet and Ida.

Two of the songs included from other works would be mentioned in detail: The inclusion of the song Csík-csicsóban from the operetta Ball of Gyergyó, which premiered on January 4, 1941, at the Hungarian Theater (Budapest), is undoubtedly one of the moments of the performance, which is intended to deepen the audience’s involvement, the interaction I come across as a lesser-known lyrics are introduced to the audience. Marika Oszvald, one of the brightest stars of Hungarian operetta performance on stage, is always Marika Oszvald, and that is why the character of the play often becomes secondary to the viewer. So Oswald’s role is herself: she puts a smile on her face, and above all a professional who has the genre in her gut. 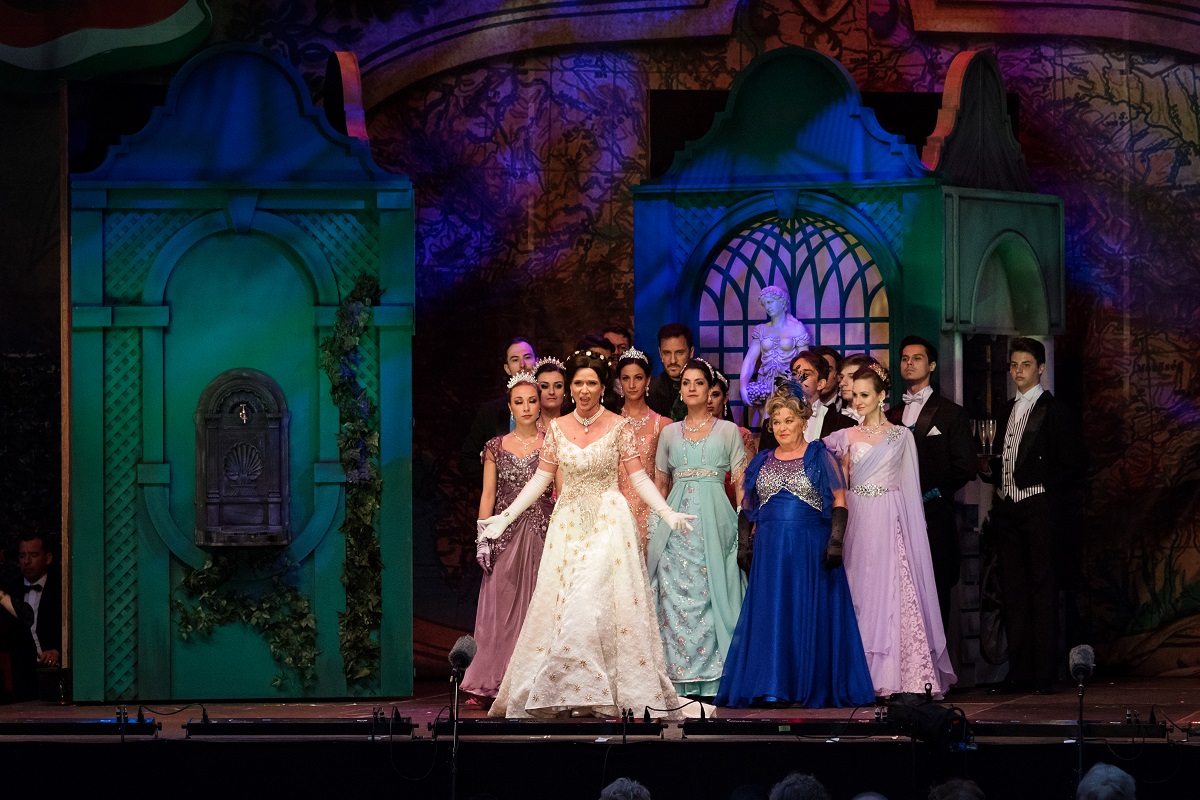 At the same time, I categorize it as a Hungarian operetta historical station, when during the rethinking of the above-mentioned song, the authors use rap as a source of inspiration for a short block, and the eternal young comedian begins to rap the catchy songlines. Because the genre can handle this style of singing, rhythmic lyrics.

However, even if only for a short time, the scene in question, the sharp change of style, breaks the unity of the performance, suddenly, without any transition from the few decades before and after the Compromise, we find ourselves in the present age, that is, in the present; Petőfi’s poem Szabadság, szerelem! was also taken from another Huszka work by the authors. It is played by Count Gyula Andrássy, which absolutely blends in with the Elizabeth adaptation and fits the character of the Hungarian noble, dramatically embossing his struggle.

His loyalty to his love (Queen Elizabeth) and his homeland (the Kingdom of Hungary) is represented by the difficulties, which are accompanied by a serious melody of sufficient depth. A good opportunity for bon vivant, Dániel Árvai, is to nuance the count’s character. Incidentally, the song play with the same title as the poem was performed on April 2, 1955, by the Budapest Operetta Theater. 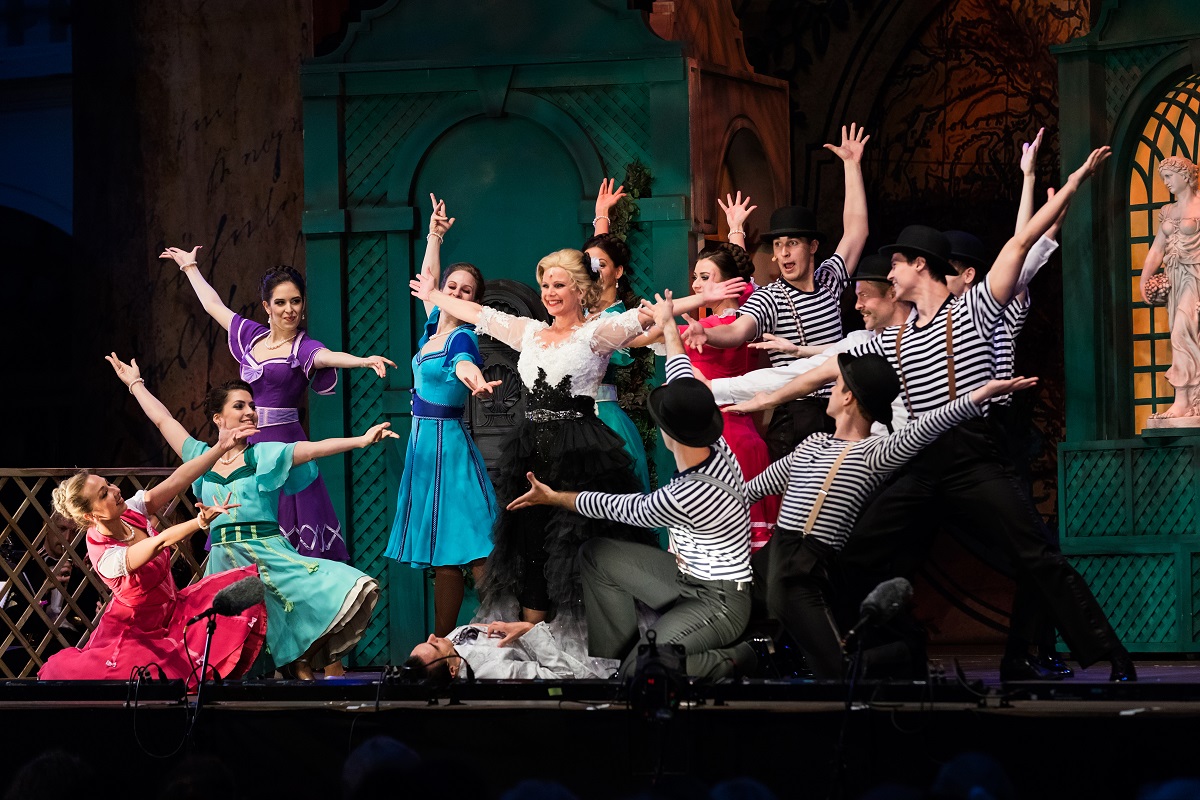 Another scene from “Sissi, Queen of Hungary,” 2021. (Photo: Monarchia Operett)

Tamás Rákay’s set design fits well into the “feeling of life” of the Austro-Hungarian Monarchy, but above all, it is a well-built tour set. Even more visually interesting are the high-quality, formally exciting costumes in the material made by Péter Erik Kollár, which also fit into the pieces of an haute couture fashion show. All the evening gowns of Sisi are magnificent, the pearls and stones are wonderful. The most exciting, however, are Stefi’s costumes, which don’t follow the shape, materials, or just the colors of age-appropriate costumes.

The directing of Miklós Gábor Kerényi is dynamic, and the choreography of Edina Szkáli brings a “real” Hungarian operetta to life. Erzsébet’s adaptation of the Monarchy Operetta commemorates Sisi, as well as Jenő Huszka, one of the fathers of the Hungarian operetta.

Emese Lengyel is researcher from the University of Debrecen, Hungary. She is specialized in 19th/20th century musical and theatrical culture, specifically the genre of operetta. The author participates in a 10-month scholarship program announced by the Hungarian Petőfi Literary Agency Nonprofit Kft. (PIÜ) and with the participation of the PIM National Museum and Institute of Theater History (OSZMI). 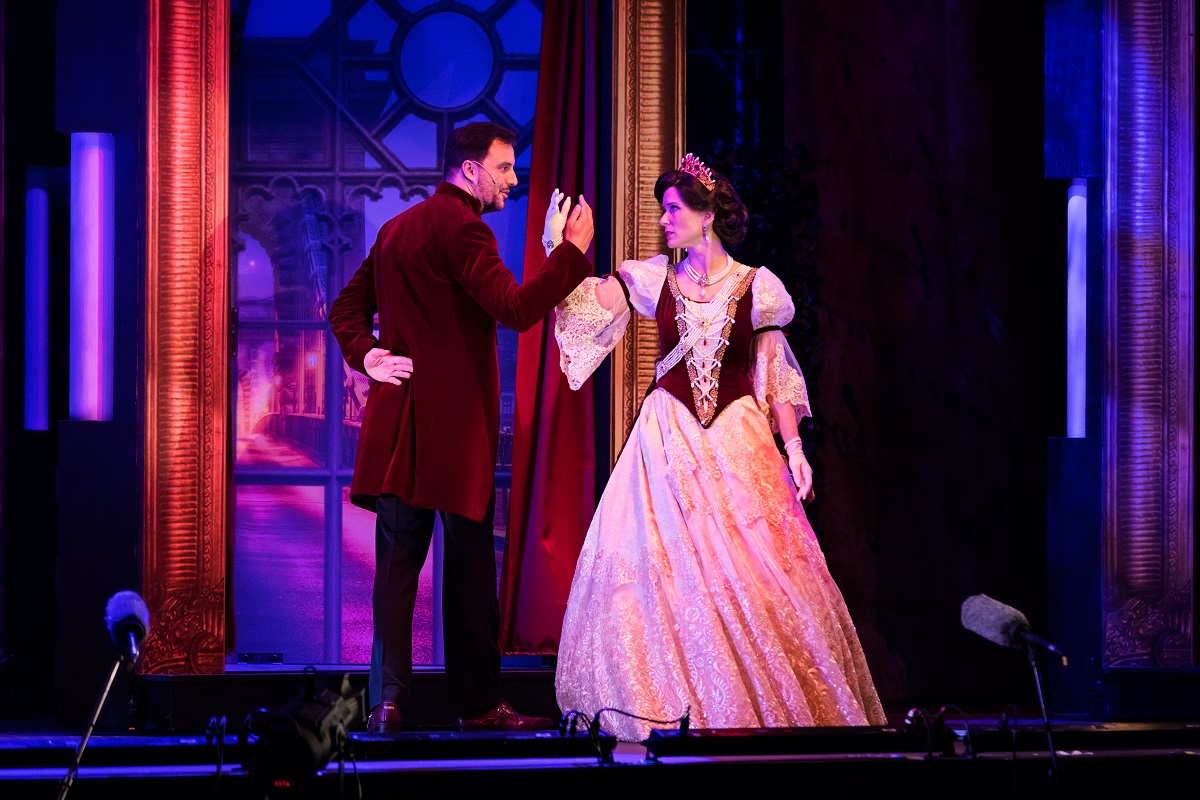 Shall we dance? Scene from “Sissi, Queen of Hungary,” 2021. (Photo: Monarchia Operett)

[3] For example, the very spectacular gala entitled The Night of the Operetta Stars or the Hungarikum Gala, in which details of the most beautiful songs of Emmerich Kálmán, Franz Lehár, Albert Szirmai, Jenő Huszka, Béla Zerkovitz, Mihály Eisemann, Johann Strauss, Johannes Brahms, Jacques Offenbach can be heard.

[5] On October 1, 2010, the Csiky Gergely Theater (Kaposvár, Hungary) re-staged an operetta that had not been played for almost 60 years and performed it as a season opener. The performance was directed by László Babarczy.

[8] The theater festival in question took place in Kisvárda (Hungary) on June 18–26, 2021. About the program see more in Hungarian: http://szinhaz.w3h.hu/tartalom/magyar-szinhazak-33-kisvardai-fesztivalja-programja; The author saw the performance on June 18, 2021.