It’s a weird and wonderful experience to sit in the Tipi-am-Kanzleramt tent, waiting for a performance of Kander & Ebb’s Cabaret to start, while 1920s hits are playing to warm up the audience: Richard Tauber singing “Ich küsse Ihre Hand, Madame” and Gitta Alpar chirping Ball im Savoy. It goes on, there’s Werner Richard Heymann and music from his UFA film operettas, there’s more Abraham, and there are various Schlager titles from the Weimar Era. The surprise is: just as operetta and Schlager from the 1920s blend perfectly, and performers back then moved with ease from one genre to the other, also to cabaret and political songs, the Kander & Ebb music blends perfectly with these oldies. Or differently put: it grows out of these older musical gems, and the style heard on the old recordings has a clear link to how ideal versions of “Two Ladies” or “If You Could See Her Through My Eyes” should be performed; not to mention more sentimental numbers like “Married.” 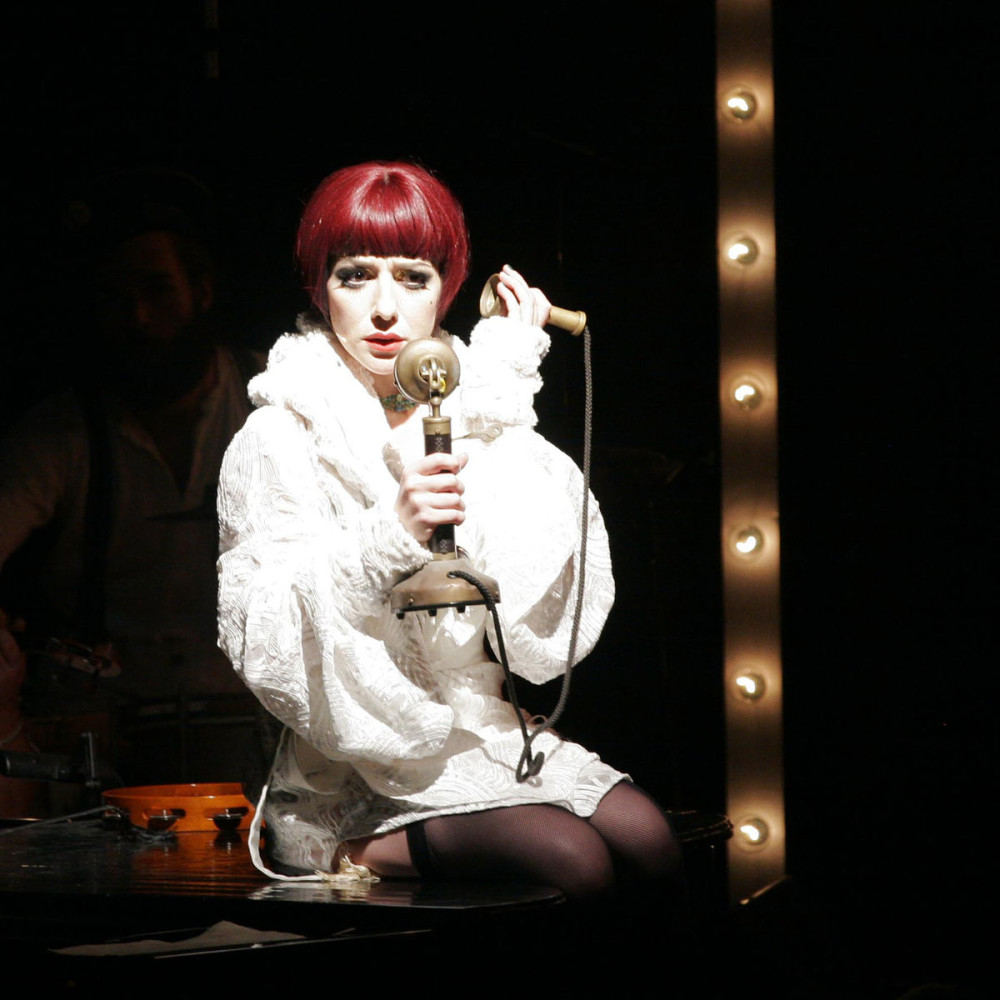 Sophia Euskirchen as Sally Bowles in “Cabaret” at Tipi am Kanzleramt. (Photo: XAMAX)

Seeing young performers such as Sophia Euskirchen as Sally Bowles shaking off the shadow of Liza Minelli and turning this petite Kit-Kat-Klub-singer into a reborn Marie-von-der-Haller-Revue, or Jörn-Felix Alt turning Cliff Bradshaw into a dazzling looking, sexually versatile hero who gets lost in the dark sensual world of Berlin before the Nazi take-over, made me watch this Berlin production in its umpteenth revival with fresh interest and look at it from an operetta perspective. Especially since my personal operetta hero Adam Benzwi conducted the performance from the grand piano, manufactured by the Bechstein company. Given the infamous behavior of the Bechstein family in the 1920s, as all-important supporters of Adolf Hitler and the ultra right-wing movement, this choice of piano added an almost spooky quality to proceedings. 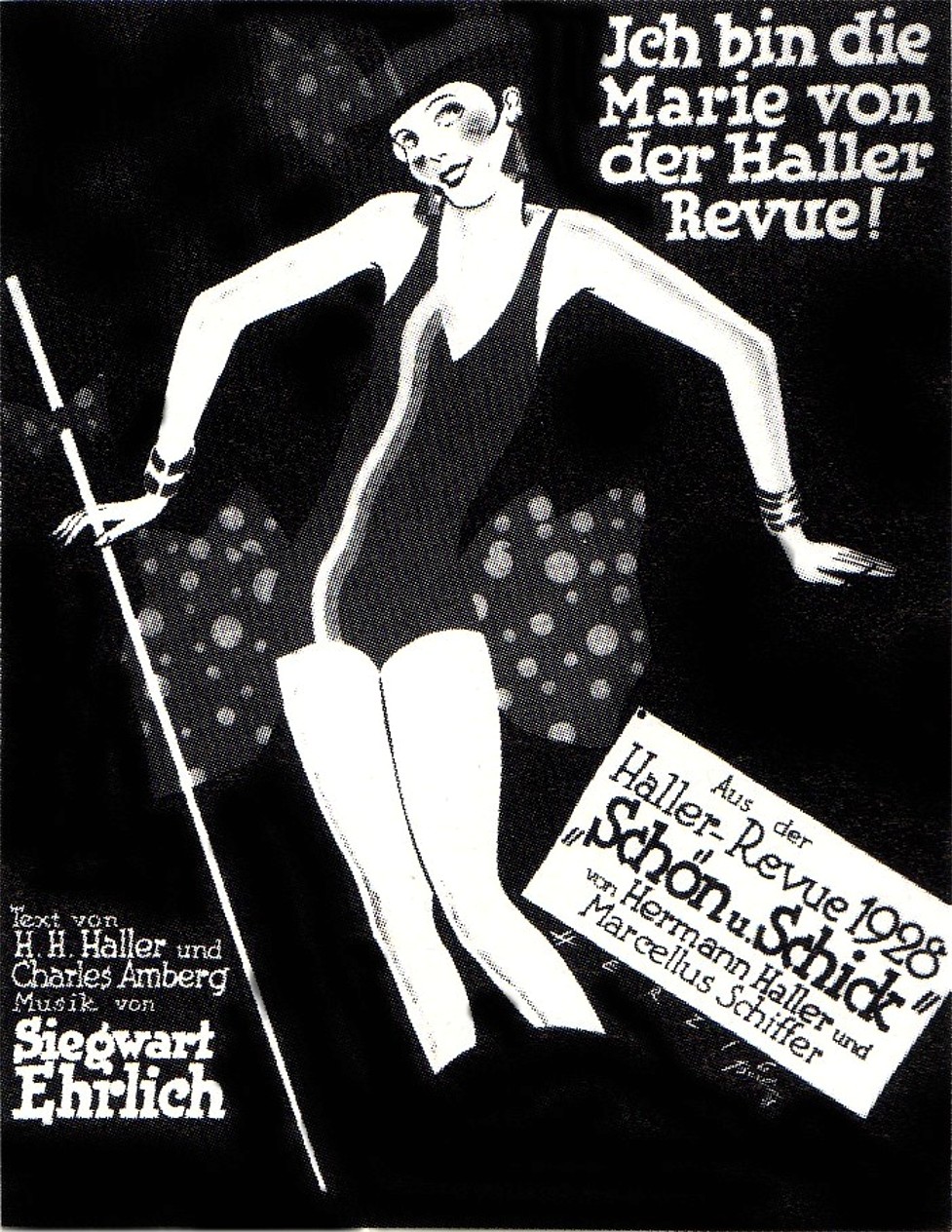 These proceedings begin, as everyone knows, with the MC singing “Willkommen, Welcome, Bienvenue.” In this case, it was Fehmi Göklü who looked and acted like Theo Lingen brought back to life. You might recall Theo Lingen from famous 1930s and 40s operetta films such as Wiener Blut and Im weißen Rössl. He’s a ‘type’ I would not usually associate with the Master of Ceremonies of Cabaret, and ideally that role needs someone more ‘evil’ and dangerously ‘sarcastic’ than Mr. Göklü, but he managed to breathe a lot of personality into his role and stearing clear of any generalized ‘show bizz’ attitudes that can kill the show and its effectiveness.

Fehmi Göklü as the Conférencier in “Cabaret” with Kit Kat Girls. (Photo: XAMAX)

The staging by choreographer Vincent Paterson has been around for a while; when it was revived earlier this summer it also had a different first night cast. But as it turns out the more magical casting was saved for later, and so I only got to see it last week-end. Sophia Euskirchen had already played Sally last season; seeing her again, now, demonstrated that she has managed to find her very unique way of handling the stellar role and filling it with a life all her own. She’s not just standing there delivering the famous show stoppers (“Mein Herr”, “Maybe This Time”, “Life’s a Cabaret” etc.), but she actually incorporates each and every musical number into her portrayal of a vulnerable, insecure, desperate youngster who sniffs cocaine when she’s fired from the club on New Year’s eve, goes after Cliff in the first rush of drugs, and is later emotionally shaken after her abortion. You know she is a hopeless case, someone dreaming of a career that will probably never happen – but she is also a crazy loveable person whose fame will live forever because of the book Cliff writes later, which is none other than Christopher Isherwood’s Goodbye to Berlin novel(s). Isherwood’s novel makes Sally Bowles one of the most famous semi-fictional characters of Weimar Germany. Sophia Euskirchen manages to make all of this understandable. And she has a glorious nonchalant chemistry with Jörn-Felix Alt as Cliff/Isherwood. The way she jumps on him, moves in with him into his room at Nollendorfplatz, then chucks him out of her life because she cannot be emotionally tied to another person too closely, is rather modern-day. And Miss Euskirchen plays all of this modernity with a rough edge and vulgarity that is striking. As it her voice, so full of character, unique colors, and power. Not since Judy Dench have I heard such a Sally – cracking, sobbing, screaming, and in the end gloriously triumphing over all the odds which are not in her favor. It’s a must-see performance! 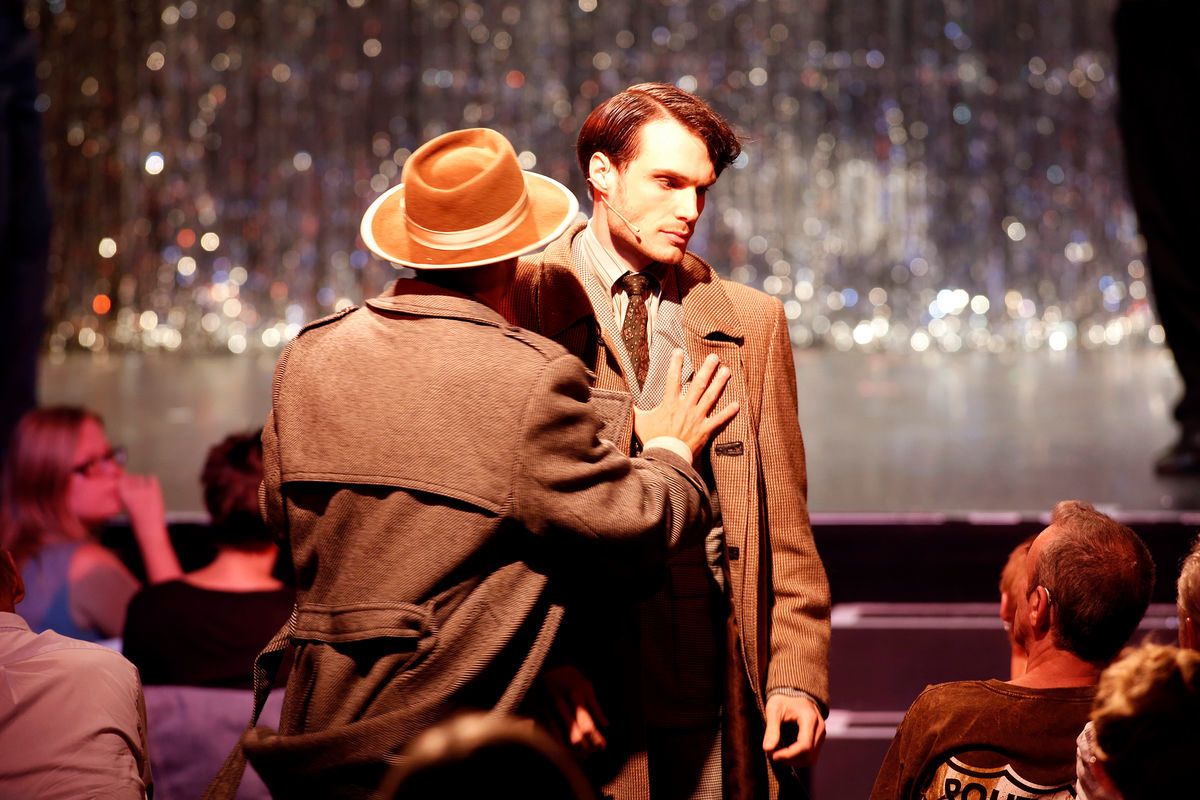 This staging by Mr. Paterson gives Cliff a fling with Bobby who also works at the Kit Kat Klub but who Cliff apparently knows from London’s Nightingale Bar. Casting Bobby with young Dennis Hupka and allowing Mr. Hupka to give Cliff a serious kiss when they first bump into each other in Berlin opens up a whole new layer of interpretative possibilities. Their hinted at affair makes it understandable why Cliff doesn’t want Sally to move into his bed, it makes it understandable why the idea of fatherhood is so special to Cliff and why he doesn’t care if the child will be his or someone else’s. This is an interpretation that should have been expanded and given more depth and detail, certainly with actors such as Mr. Alt and Mr. Hupka at hand, but even in this sketchy version the two actors make their ‘story’ so fascinating that you are able to fill in the gaps yourself.

Having such a convincing Cliff – torn between Sally and Bobby – makes it especially sad that in this version Cliff doesn’t get to sing “Why Should I Wake Up?” as a grand solo; instead, Mr. Alt only has one real musical number which is “Perfectly Marvellous,” but that’s sung mostly by Miss Euskirchen. Still, this Cliff clearly dominates the story, and in the end turns it into his story. It’ll be his book, his novel, dedicated to Sally. Miss Euskirchen gives out a little scream when she realizes this; it’s a brief moment that is profoundly touching. 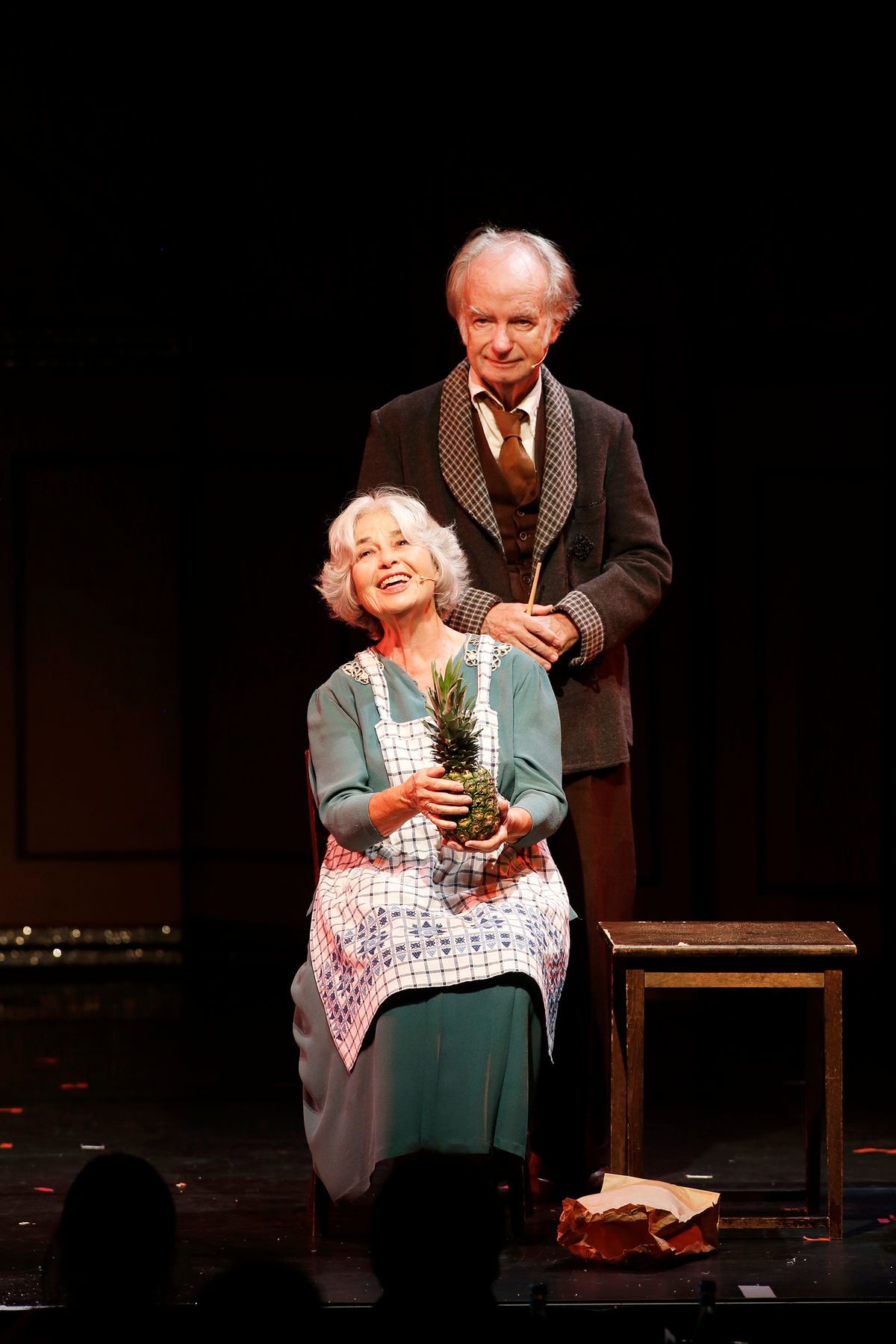 In this staging, the ‘other’ odd couple – Fräulein Schneider and Herr Schultz – are played by Regina Lemnitz and Peter Kock. They show these two characters as immensely likeable everyday people – as normal as blueberry pie, which makes it easy to identify with them and their troubles. While Lotte Lenya, who created the role of Frl. Schneider, turned her into an overwhelming figure of almost Greek tragedy proportions, singing her two solos “What Would You Do?” and “Who Cares, So What?” with a fatal determination that simply blows you away, Miss Lemnitz sings them without fatality – and it works! As does their duet “Married” which actually brought a tear to my eyes.

Jacqueline Macaulay as Fräulein Kost (the resident prostitute bringing one sailor after the other into Frl. Schneider’s apartment) delivered the comic relief. And turned her character into a menace towards the end, when she finally gets a chance to get back at the world and her landlady by joining forces with the Nazis. She’s supported by Romanus Fuhrmann who makes Ernst Ludwig just the right kind of friendly devil who takes Cliff under his wings at first and then beats him up, mercilessly, when Cliff refuses to cooperate with the new political forces. 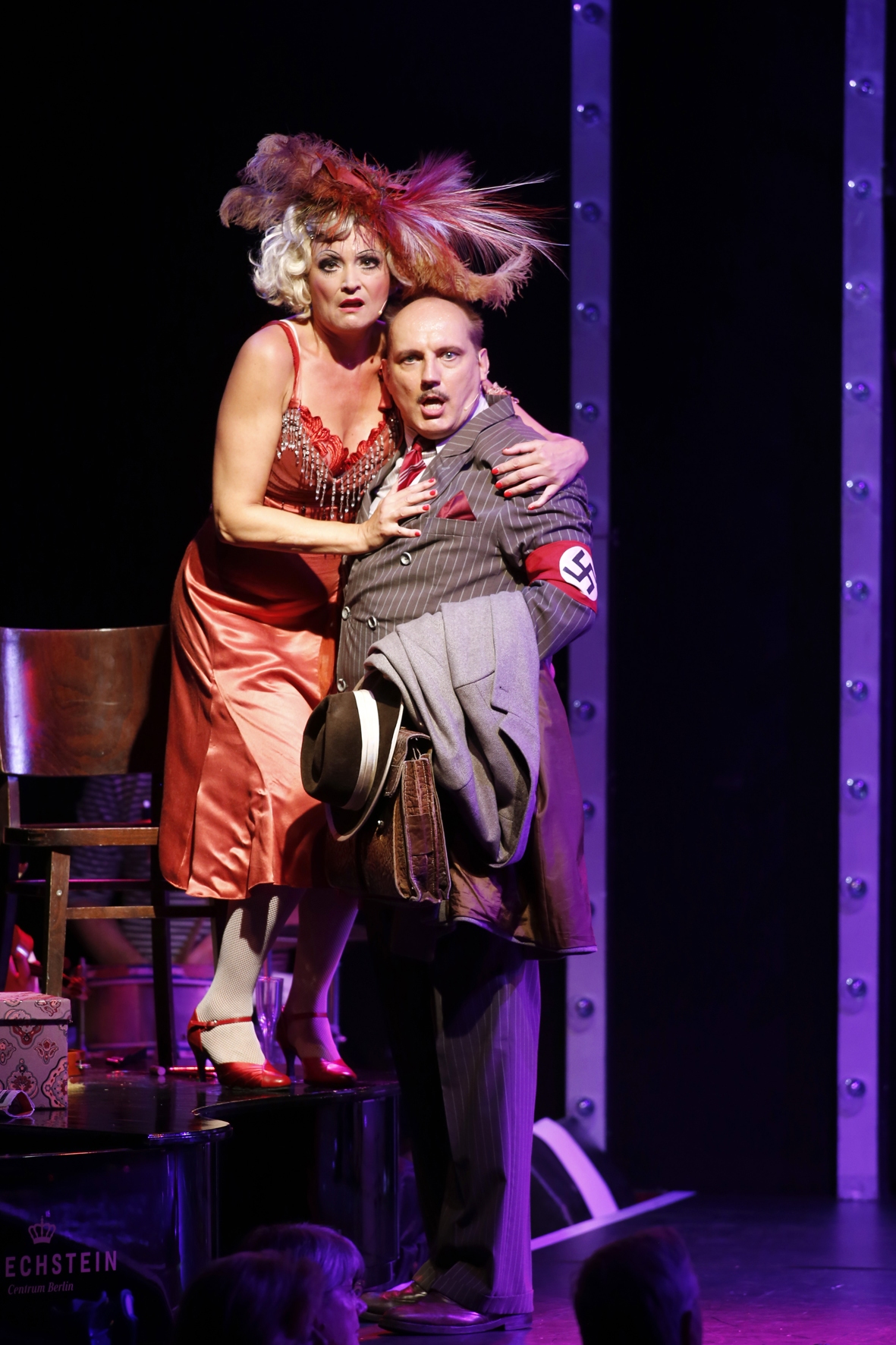 With all of this said: the entire cast and dance group would be perfect for any Weimar Era operetta or revue, for example any of the Spoliansky/Schiffer shows, the Abraham titles, or even the Oscar Straus pieces now revived at Komische Oper with Dagmar Manzel. As a matter of fact, there were some deep tragedy moments in which Miss Euskirchen reminded me of a young Miss Manzel, they both have that clownesque quality, great command of the stage, and that smoky voice. The only difference is that Miss Euskirchen is the better ‘natural’ singer; and I’d love to hear her in a Manzel role one day, which basically means: in a Fritzi Massary role! And while I dream of that, I also dream of Jörn-Felix Alt as the tenor hero in any of the above mentioned shows. He has demonstrated elsewhere that he’s a superb vocalist, and the operetta world needs more such young people! (We shouldn’t forget Dennis Hupka here, either.) 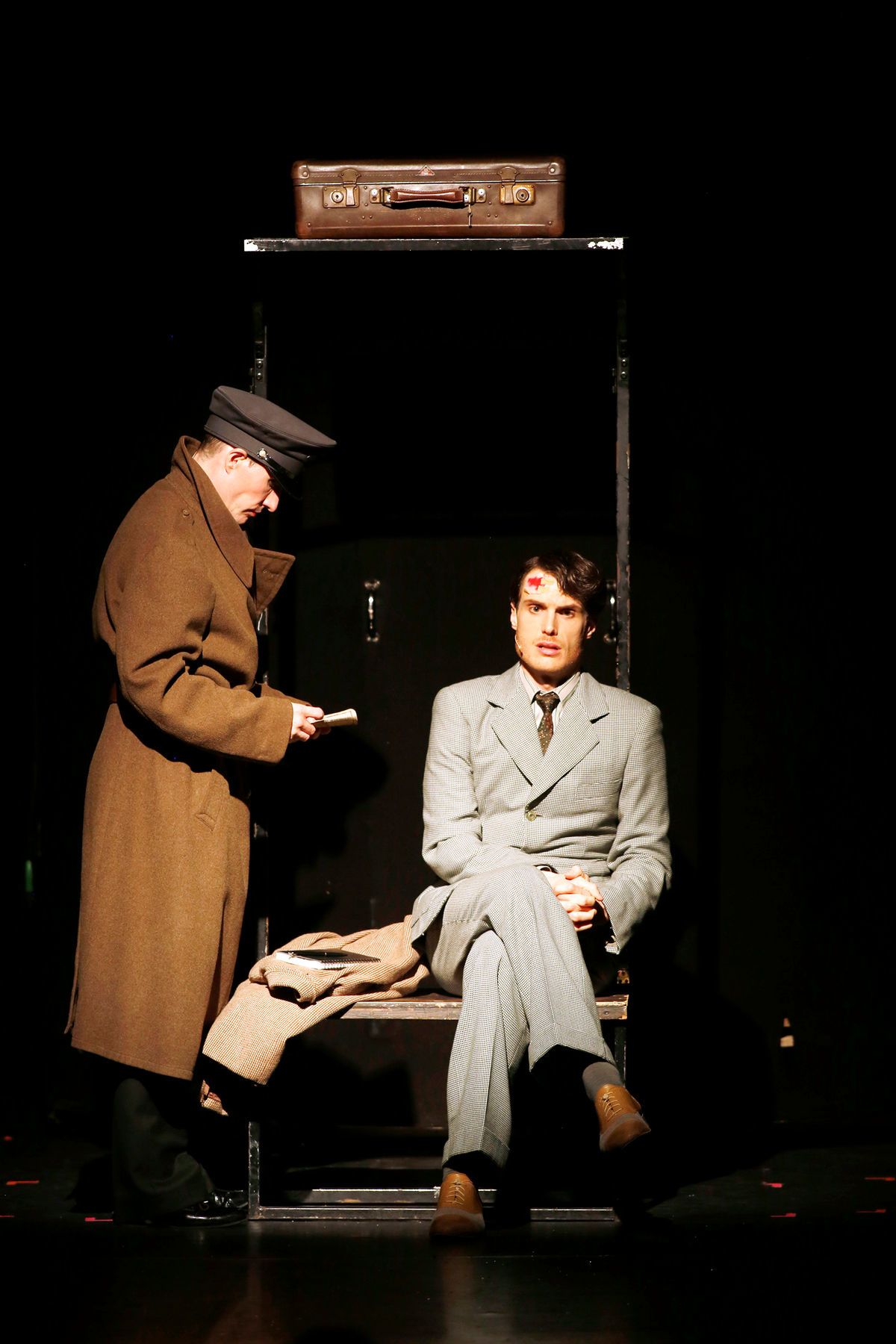 If you get a chance, try seeing Cabaret before the run finishes on 23 September. It’ll return next July, hopefully with these actors and actresses cast for opening night. Also, Schwules Museum will have a Christopher Isherwood and Don Bachardy exhibition next summer, it’ll include photos and art works reflecting Isherwood’s time in Berlin, living near Nollendorfplatz, and documenting his long later partnership with painter Don Bachardy.