The good news is: Mischa Spoliansky’s modern-dating-chaos operetta Alles Schwindel (1931) is returning to Berlin’s Gorki Theater for the 2018/19 season. The equally good news is that Jonas Dassler will still star in it, even though his movie career has seriously taken off since the production premiered last December and he’s now also cast in other Gorki productions that might seem more fitting for a young actor like him (he’s in A Walk on the Dark Side by Yael Ronen, a play about a dysfunctional family in which Mr Dassler portrays the youngest of three rivaling brothers). What’s so remarkable about this is the fact that a completely forgotten cabaret operetta – originally written for Gustaf Gründgens and Margo Lion and not very successful in 1931 – has managed to make such a splash in today’s Berlin theater scene: at a venue that is not known for its ‘operetta’ tradition, where the core audience are young politically interested cosmopolitans representing the new and hip capital, instead of the old farts many associate operetta with. (I include myself as a 50+ Berliner who doesn’t see himself as ‘hip’ and ‘new’ anymore, but who still enjoyed each and every visit to Gorki for Alles Schwindel and A Walk on the Dark Side.) 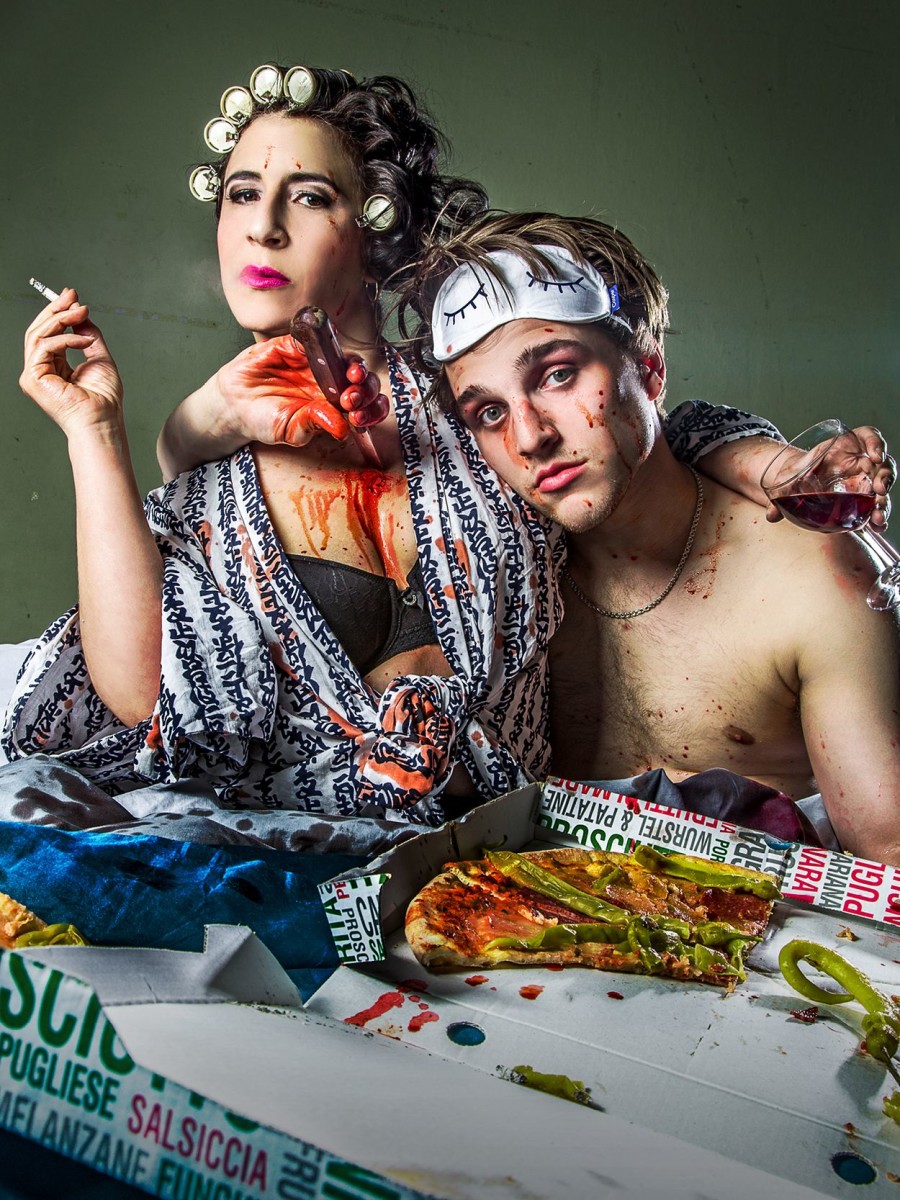 The poster for Gorki’s production of “A Walk on the Wild Side.” (Photo: Esra Rotthoff)

When Christian Weise’s production first came out, just before Christmas last year, many at Gorki had doubts that this operetta would last for long – with the post-colonial, Critical Whiteness crowd that usually frequents the place. To everyone’s amazement, this farce about modern dating culture and the lies people tell to impress potential sex partners who they meet via newspaper ads (as a forerunner of today’s dating apps) resonated with Gorki groupies. Also, the almost cartoonish ‘Weimar’ era staging with its emphasis on eccentric character types worked, almost like a direct mirror for today’s characters dealing with very similar problems, which include the total ‘fakeness’ of everything considered Hipster Culture in Berlin.

As a result, Alles Schwindel was put on and on again, usually once a month for a single performance. I went to see nearly all of them, and I was always astonished how well rehearsed the individual performances were: the large cast managed the complicated choreography and musical ensembles like clock work, and with such vigor that each new encounter with Alles Schwindel felt as fresh as opening night. (And that’s a miracle in itself!)

When you see a show over and over again, you obviously start noticing more details, e.g. the brilliance of Marcellus Schiffer’s text, so dry and black humored, so funny when delivered the right way. It amazed me to see how this ‘Neue Sachlichkeit’ from 1931 works so well today, and seems so contemporary.

I also realized, in later performances, that this production wasn’t all about Mr. Dassler as Tonio Hendricks, though he delivers a stand-out performance that includes the most dazzling dancing in a white tux you will have seen in a very long time. It’s also the rest of the cast that is stellar. Vidina Popov as Mr Dassler’s love interest Evelyn/Erna is a force of nature; and her rendition of the act 1 „Ja wenn die Königin Elisabeth…“ is an operetta moment which I cannot get out of my head anymore, not because Miss Popov is a great singer (she isn’t) but because of the way she delivers that song. She simply rocks the place, and she repeats that in act 2 with the hard-rock version of Spoliansky’s “Society Song”. It needs to be heard to be believed. (The S-word flies around like a cruise missile.)

In the end, however, it’s the entire cast that makes this Alles Schwindel a delight. That shows: operetta works well – and even better – when no one bothers to sing operatically, but instead focuses on acting, dancing, stage presence and charisma. There’s a lot of all four floating around in this production, which gives Alles Schwindel à la Gorki an edginess that Komische Oper only achieves when Dagmar Manzel goes into overdrive and that Tipi am Kanzleramt manages when Anna Mateur takes center stage.

It’s a miracle that this Spoliansky has now found a lasting place in the Berlin repertoire; while Abraham and Oscar Straus have done so too, thanks to Barrie Kosky. If you haven’t seen Alles Schwindel yet, your next chance is 9 September and 28 October. Gorki usually announces performances after that at short notice, i.e. a month ahead of time. So it’s worth checking their website regularly.

Meanwhile, we heard that a reconstruction of the original lost 1931 score is underway, which will one day substitute the current ‘reconstruction’ by Jens Dohle and his small band. Nonetheless, we hope that the Dohle/Gorki version will find its way onto a cast album, preferably also a DVD that includes the English subtitles that you get live in the theater. (It’s very suited for English speaking audiences.) To hear another very different orchestral version try Uta Lemper, using an English translation that sometimes surpasses even Mr Schiffer’s genius.

The only sad aspect is that Gorki’s intendant Shermin Langhoff hasn’t announced any more operettas for the new season; even though the Alles Schwindel crew would be almost ideal to deliver something as radical as The Beastly Bombing: A Terrible Tale of Terrorists Tamed by the Tangles of True Love, the modern “Savoy Opera” by Roger Neill and Julien Nitzberg that permiered in Los Angeles in the small Steve Allen Theater which is comparable – in terms of programming – to Gorki. The New York Times wrote about it: “The Beastly Bombing is not your ordinary operetta. It is a buddy comedy about white supremacists and members of Al Qaeda who meet while attempting to blow up the Brooklyn Bridge, all set to jaunty melodies evocative of Gilbert and Sullivan. The skinheads and terrorists gambol about the stage, engaging with pill-popping first daughters, a Saudi-loving president, a pedophilic priest, the New York City Police Department and Jesus. In a rollicking dance number, the neo-Nazis, terrorists and a Hasidic extremist bond over what they have in common: ‘I hate Jews.’ (The Hasidic extremist hates secular Jews.)”

But who knows, that might still happen. Christian Weise’s cartoonish production style would fit Beastly Bombing perfectly. Until then you can enjoy the return of Alles Schwindel and hope that the rediscovery of Spoliansky will spread beyond Berlin’s borders. His Weimar Republic cabaret operettas are musical gems well worth playing, especially with casts like this!

For more information on performance dates and cast, click here.