The Beastly Bombing, or A Terrible Tale of Terrorists Tamed by the Tangles of True Love is an operetta in two acts by Julien Nitzberg (text) and Roger Neill (music), written in 2006. It premiered the same year at The Steve Allen Theater in Los Angeles, followed by further performances in New York, Chicago and Amsterdam, NL. 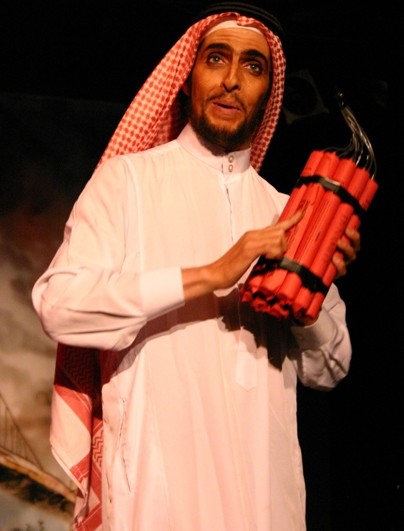 Act One: The two white supremacists, Patrick and Frank, decide to express their dissatisfactions with their government by blowing up the Brooklyn Bridge. Meanwhile the twin sisters, Clarissa and Elyssa, have run away to New York City and are very ecstatic to be there, but yet afraid that their father might find them. Wandering into Washington Square Park, they meet a drug dealer. When asked what drugs they like, they happily sing “We Like Mushrooms,” detailing their love of almost every pharmaceutical known to man. Arriving at the Brooklyn Bridge, Patrick and Frank sneak out to position their bomb and run into Abdul and Khalid, two Al Qaeda terrorists, who have arrived with the intention of blowing up the bridge, also. The two sets of terrorists fight each other only to knock each other’s bombs off the bridge where they explode in the water below.

As sirens sound in the distance, the terrorists run off together. Angrily, Abdul accuses the white supremacists of having no reason to blow up the bridge. Patrick and Abdul each explain their motives in the song “Our Ideology.” During the song they realize that they both equally hate Jews and “ZOG,” the Zionist Occupation Government of the United States. Covered with water and with the sounds of sirens in the air, they run into a Brooklyn clothing store to find new clothes. The store turns out to be run by a Hasidic Jew. Wanting to avoid the police, they buy clothes from the store and leave dressed as Hasidic Jews.

At this point, Patrick and Abdul have bonded and decided to figure out a new plan without any input from their less intelligent partners. Frank and Khalid unhappily sing to each other about their failures to gain respect in their terror movements in the “Song of the Sensitive White Supremacist.”

Moments later, Clarissa and Elyssa arrive, running from the police. Bumping into all four “Hasidic Jews,” they quickly hide their drugs on them. The police arrive and arrest all the men and the girls, taking them to jail.

In the jail, the police refuse to give the men any food since they have no kosher food. Starving, the men agree to take some pills the girls have snuck in, thinking they are speed. Moments later, looking out their cell window, they all are surprised when they see the Brooklyn Bridge blow up and they have no idea who did it.

At the White House, the President enters singing “The Bravest President” detailing his vast courage. In the song, he is told by his aides that the bridge has been blown up. At the same time, he is informed that his twin daughters have escaped from rehab and can’t be found.

Act Two: In the jail, the drugs have started to kick in. Unfortunately, the pills were not speed but ecstasy. As the ecstasy takes effect, everyone starts falling in love. They sing “People Who Love like Us” as Frank and Clarissa, Khalid and Elyssa as well as Patrick and Abdul each admit their love for each other. A new prisoner is put in their cell. When asked why he is in jail, he reveals in the song “Morals of Society” that he is a Priest who has been arrested by a close-minded society, appalled by his deep love for young boys. He agrees to marry all the young lovers and does so in the jail cell. Moments later, the Secret Service arrives, freeing the president’s daughters as well as their new husbands and friends.

At the White House, the president is determined to wreak vengeance on somebody. Informed by his aides that the likely bombers are Saudi, he sings of his love for the “House of Saud,” before he randomly decides to bomb Chad (“just the sound of it makes me mad”) instead.

His daughters and their friends are brought in just as the President is informed that a strange submarine was caught in the East River and that the sailors are being brought to the White House. Much to the President’s surprise, the sailors are not from Chad but instead are extremely elderly Japanese gentlemen who have been traveling the world since 1944, trying to find the Brooklyn Bridge to bomb. Unaware that World War Two is over, they are happy to have finally achieved their mission.

With bombs heading to Chad, the President does the only sensible thing he can do — he tells his aides to have the bombs redirected to Japan. His aides rush out, leaving him alone with the terrorists.

Abdul and Patrick are excited. Now they have a chance to do something even bigger than blowing up a bridge- they will kill the President. But Khalid and Frank are not happy about this, they like the idea of being First Sons-in Law. Just as they are about to kill the President, Khalid stops them and asks the President to explain his policies in the Middle East. Because they are now family, the President confesses to them a secret. Years ago as a young man, the President was arrested for drunk driving. In jail, he met a member of the Nation of Islam who introduced him to the Koran. Excited to hear about Mohammed’s history as a mighty warrior with many wives, the President secretly converted to Islam. All these years he had schemed to get into office as part of anti-ZOG plot. Happily, Abdul and Khalid reveal that they are Muslims too. As bombs explode over Japan, one and all joyously embrace while the President sings the show’s finale, telling his new expanded family that no matter how bad things get in the world, they must always remember “There Still is Love.” Everyone (except the unfortunate Japanese) live happily ever after.

Work history and political background: Julien Nitzberg, who already worked for Film and Television before, developed the idea of The Beastly Bombing in the early 1990ies after the first attack on the World Trade Center. The appropriate medium for his message was found after he visited a performance of The Pirates of Penzance by Gilbert and Sullivan in London. This night, he worked out the whole story and finished book and lyrics.

Nitzberg proceeds the political and historical events of the last two decades in his operetta. The attack on the Brooklyn Bridge can be seen as equivalent to the happenings of 9/11, while the several terrorist groups as well as the final revelation of the President being a muslim himself can be understood as a hint about the various conspiracy theories existing ever since. Even the way the President gets informed about the attack and his haphazard way of handling the situation with a military action remind of the real circumstances around 9/11.

Not only the story itself and its bizarre and absurd presentation, but also several elements of camp and the musical construction, that intensely reminds of the comic opera of the late 19th century, parody the American history of the past few years effectively.

The musical references to operetta composers Gilbert and Sullivan are both distinctive and intentional. Thus reminds the duet of the twin sisters („We Like Mushrooms“) of the Mikado song „Three Little Maids from School“. Also the song „I Am the Bravest President“ is as a patter song a musical and conceptual reference to another Gilbert and Sullivan song, „I Am the Very Model of a Modern Major-General“. The characters of Abdul and Khalid are obviously inspired by The Pirates of Penzance, too.

As well as music historical relations one can find parodies on real personalities (mainly President Dodgeson) and breakings with common stereotypes, transported by the several characters. The main stereotypes, embodied through the white supremacists, the Al-Qaeda terrorists, and the two spoilt upper class girls, each experience a certain breaking or polarization. Khalid and Frank show their sensitive side in „The Sorrows of the Sensitive White Supremacist“, Patrick and Abdul fall in love with each other, plus Clarissa and Elyssa are the naive, spoilt and giggly oversubscription of themselves, whose only care is to find other ways to get high.

The role of the President deals inter alia with the religious views of George W. Bush. During the song “My Savior Did Appear” the President is shown singing and dancing with a „long-haired queer“ Jesus, and in the end they even share a kiss.

Another cliché is confirmed by the pedophile priest, who, in this case, is an openly practising pedophile without any moral doubts. Furthermore, he makes in „The Morals of Society“ references to the church’s intolerance towards abortion, obviation and homosexuality, but later agrees to marry Patrick and Abdul in jail.

Reactions: The Beastly Bombing was not only compared with the works of Mel Brooks, but also with the humor of South Park creators Trey Parker and Matt Stone, who recently created the satiric as much as successful musical The Book of Mormon. In Amsterdam was the operetta promoted with the slogan „Borat – but as a musical“.

Awards: At the prestigious LA Weekly Theater Awards, The Beastly Bombing won the Musical of the Year Award.

Press: Despite controversial processing of several delicate subjects, the operetta got almost exclusively positive and relatively huge reactions from the international press:

„This is the most offensive and morally unredeemable musical I’ve ever heard. I’ll do everything in my power to make sure this is never produced.“ – Stephen Schwartz

„Like its title, with the quaint adjective attached to a deadly serious noun, “The Beastly Bombing” is a thing of opposites: half sophisticated musical, half fraternity drag show; half slick, half clunky. Satire of the follies of the current administration has something to offend everyone and won’t do much to heal a bifurcated nation.“– Variety

Cast and production of the European premiere in Amsterdam:

The role of President Dodgeson was at the European premiere on 18 February, 2009 in the Opera aan het IJ in Amsterdam also performed by American baritone Jesse Merlin. The rest of the cast consisted of Dutch singers like Noortje Herlaar, Sterre Maier, Simon Feenstra, Sinan Vural, Mart van den Hout, Rámon Sanchez and Juan Wells as Jesus. Part of the production were, among others, Miroslav Dimitrov (musical direction), Jan Boiten (decor and lighting) Steffie Sauer (choreography) en Inna van den Hogen (direction). The dialogues were translated into Dutch by Olaf Mulder while the Songs were performed with the original English lyrics.

„The Sorrows of the Sensitive White Supremacist“ (Frank & Khalid)

„With Drugs We Did Experiment“ (Clarissa & Elyssa)

„The Morals of Society“ (Priest & the Six)

„The House of Saud“ (President Dodgeson & Secretaries of State and Defense)

„The Union of Forgotten Terrorists“ (Union of forgotten terrorists & Ensemble)

This article by Mariana Roos was written as part of the course “Und auch ein bisschen andersrum … Operette & Gender” at the University of Vienna, taught by Marie-Theres Arnbom and Kevin Clarke in the winter of 2013/2014.