A revival of the 1978 musical – based on plays by Ben Hecht, Charles MacArthur and Bruce Millholland – was long in coming, but here it is, thanks to the Roundabout, and I’m happy to report they’ve done the piece proud. 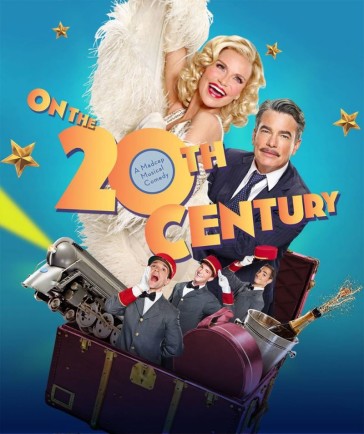 Poster for the 2015 Broadway production of “On the 20th Century.”

Kristin Chenoweth shines in the role she was born to play: the tempestuous movie star Lily Garland (nee Mildred Plotka). She’s finely matched by Peter Gallagher as the melodramatic director/impresario Oscar Jaffe who’s desperate for Lily to star in his next play after he’s experienced a woeful series of flops.

These are the roles so superbly created by Madeline Kahn and John Cullum, and the current pair live up to the high standards set by that pair.

After his latest play closes in Chicago, Oscar contrives to woo his former protégé and lover Lily to come back to him. He tells her she’ll star in a role that would be the envy of Bernhardt and Duse: none other than Mary Magdalene in a grand biblical epic. Meanwhile, a rival producer tries to persuade her to play a worldly socialite in a brittle drawing room comedy by Somerset Maugham. Her schizophrenic soul-searching in the “Babette” production number – as she’s torn between those two options – is hilariously written and played.

Spiffily designed in high Art Deco style by David Rockwell (and lighted by Donald Holder), and staged by Scott Ellis with the style and verve of the Twentieth Century Limited train itself, the revival honors the original but with a bracingly fresh interpretation. Warren Carlyle’s choreography supports the concept of a show in as perpetual motion as the high-speed train.

The supporting cast is top of the line. Andy Karl, so good in the title role of the musical Rocky, demonstrates his very accomplished comic side as Lily’s preening silver screen co-star and lover, matching the elastic performance of Kevin Kline in the original. And Mary Louise Wilson is every bit as endearing (and funny) as Imogene Coca in 1978 as the loony Mrs. Primrose who plasters the train with “Repent” stickers. As Oscar’s press agent and business manager respectively, those seasoned pros Michael McGrath and Mark Linn-Baker generate more chuckles. All are outfitted most entertainingly in William Ivey Long’s colorful costumes.

But, above all, can only marvel at Chenoweth’s talents: inspired comedienne, deft singer, graceful dancer, and versatile songstress. She belts out the comic songs like “Veronique” and “Never” with great flair, but handles the more operatic sounding numbers such as “Our Private World” with the requisite beauty of tone.

Madeline Kahn’s stamp on the role, brilliantly captured on the CD, is an indelible as, say, Judy Holliday’s in Bells Are Ringing, even though Kahn didn’t remain in the show very long, but Chenoweth projects many of the same qualities. And her vocal timbre is, in fact, more like Kahn’s than that of other interpreters such as Judy Kaye (who so skillfully replaced Kahn), Marin Mazzie, or London’s much praised Julia McKenzie.

Gallagher wouldn’t have been my first choice for a part that calls for such an over-the-top ham, but in fact, he’s terrific, and plays the Barrymore-like melodramatics as if to the manner born.