This admirable young company finished its fifth season with Victor Herbert’s hit, Sweethearts, which opened at the New Amsterdam Theatre (yes, the very same venue where Disney has long since taken up residence) in 1913, thereafter touring for several years. The work is most assuredly in the top five of the composer’s best shows (lyrics by Robert B. Smith), and Artistic Director Alyce Mott’s production resoundingly confirmed its evergreen appeal. 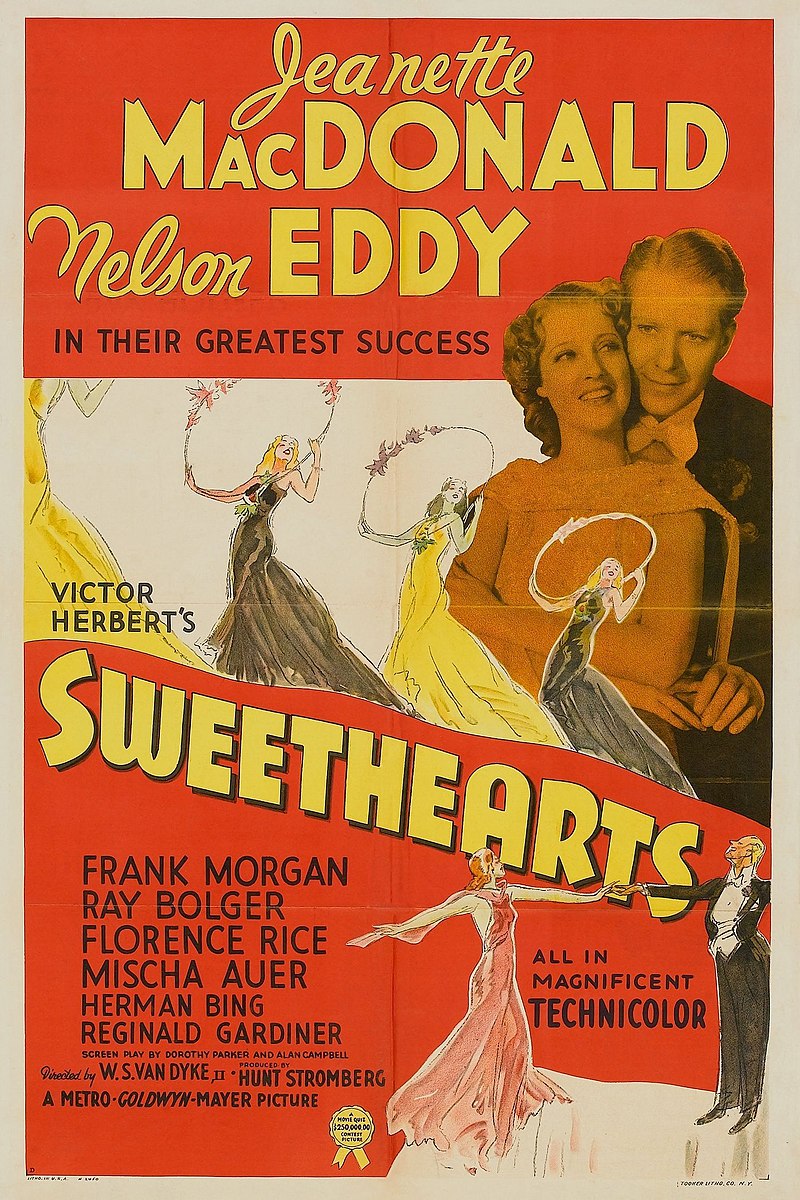 Poster for the 1938 MGM movie version of “Sweethearts.”

Those who only know the property from the famous MGM film with Jeanette MacDonald and Nelson Eddy – a clever modern day story about battling operetta stars (which rather presaged Kiss Me, Kate) appearing “in a production of” Sweethearts, had a witty script by Dorothy Parker and Alan Campbell – will discover it bears scant resemblance to the original.

This is the third go-round for Mott and this work, and as such, definitely the charm. She had originally adapted it for the late Dino Anagnost’s Little Orchestra Society in 2005 where it was narrated by Lynn Redgrave no less. But whereas the maestro’s annual foray into Victor Herbert put the emphasis squarely on musical values — with singers cast more for their voices than their dramatic aptness – the VHRP productions utilize performers who truly fit the roles, and who are adept at both music and dialogue. The productions are more fully staged with excellent choreography (by Susanna Organek whose work strongly enhanced every number). Mott’s version was, by the way, also nicely mounted by Light Opera of New York (LOONY) in 2013. 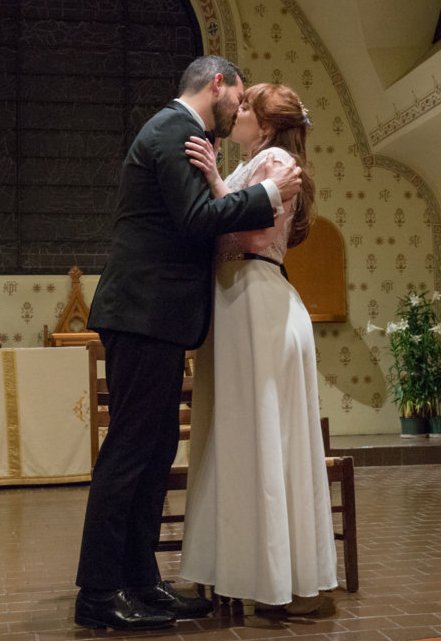 Besides featuring a crackerjack cast, the spring VHRP shows now feature The New Victor Herbert Orchestra – seven topnotch players including William Hicks on piano – led with spirit and style by VHRP Music Director Michael Thomas who had also conducted the LOONY performance. And given the intimate acoustics of Christ & St. Stephen’s Church, the orchestra perforce sounded much larger. The lush entr’acte was a special joy.

The story opens in a laundry in Bruges, the establishment of Dame Paula (Vira Slywotzky, also serving as delightful narrator, and reprising her role in the LOONY production). She’s assisted by her four (originally six) daughters and adopted child Sylvia (Claire Leyden) whom she found among the tulips as an infant. Sylvia is in love with the caddish Lt. Karl (Jack Cotterell) who’s carrying on with milliner Liane (Joanie Brittingham). 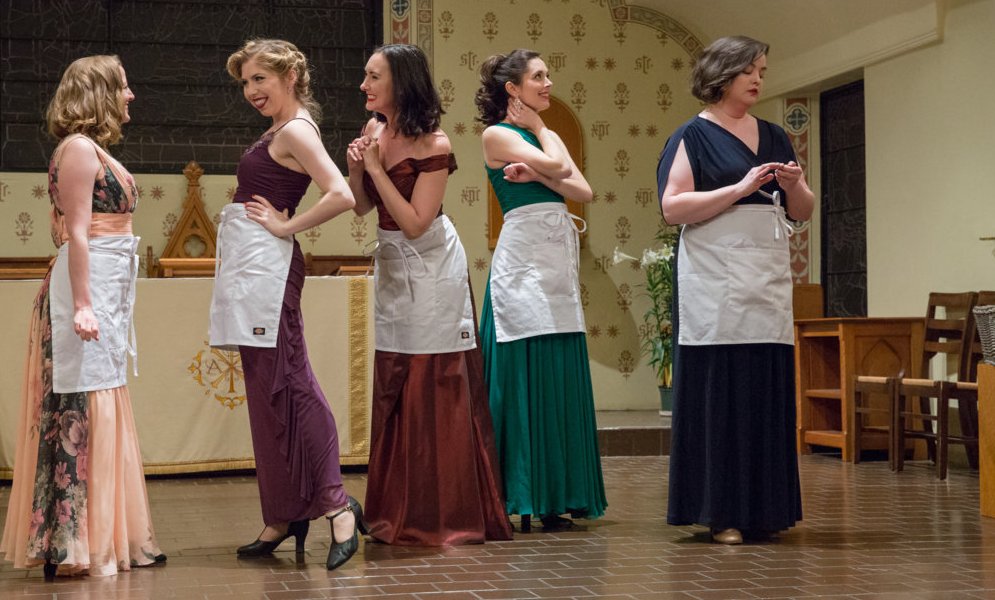 When Sylvia learns of his infidelity, she is ready to warm to the charms of Franz (Jovani Demetrie), initially unaware he is the heir presumptive to the (fictional) country of Zilania. But we learn Mikel (Jonathan Fluck), a Zilanian diplomat, had spirited Sylvia, actually a princess, out of the country during a revolution, and has now returned to restore her as the rightful monarch of the country. But the ambitious Liane lets herself be mistaken for the royal young lady, thwarting the efforts of Mikel and two comic intriguers, the Dutch von Tromp (Matthew Wages) and veddy British Slingsby (David Seatter). An additional plotter, the French Caniche, has been dropped, his bits conflated with Mikel’s character.

The original book by frequent Herbert collaborators Fred De Gresac and Harry B. Smith, roundly denigrated by critics, was here respectfully and intelligently tweaked by Mott. Some song order has been changed, and some verses dropped, mostly to accommodate the streamlining of characters.

Leyden and Demetrie had given a tantalizing preview of a couple of the Sweethearts numbers at February’s lovely Valentine’s Day concert, and lived up to what they presented then. Leyden had the most stage time, scoring with the popular title song, the twinkly “Mother Goose,” the teasing “In the Convent They Never Taught Me That,” and the soulful “Angelus, singing with lovely tone and incisive delivery of the text. Herbert specifically tailored the part for the popular Christie MacDonald, and I can’t help thinking he’d surely have been pleased with Leyden’s assumption of the role.

The song “Sweethearts” was so popular in its day, it was played everywhere, leading an exasperated Herbert, who with fellow composers had recently formed ASCAP, to seek legal action which was successfully resolved when it reached the Supreme Court, ensuring that composers would henceforth be recompensed for public performances of their work.

Virile baritone Demetrie’s ardent “Every Lover Must Meet His Fate,” which recurs throughout the show, was powerfully sung, and his counterpoint reprise of the number in tandem with Leyden’s “Angelus” was a genuine goose-bump moment, Herbert’s musical mastery never more evident. (His finales in this work are also superb and as complex as anything in the operetta genre.) Demetrie and Leyden also blended beautifully on their second act reverie dreaming of domestic bliss, “The Cricket on the Hearth.”

Brittingham made Liane quite the minx, a far cry from her usual good girl roles, and scored with “There is Magic in a Smile,” sung when she briefly thinks she has the upper (royal) hand over Sylvia.

Seatter’s delivery of “I Don’t Know How I Do It, But I Do” rivaled Roderick Cook’s masterful rendering in the great 1983 performances given at Town Hall under the baton of Evans Haille.  According to Mott’s program notes, incidentally, the song may be the first instance in an American musical of a song specifically written to be spoken over musical accompaniment.

Elsewhere, Wages unleashed his strong baritone on the sardonic “Pretty as a Picture” as the men campily mocked the fairer sex’s use of cosmetics. Seatter, Wages, and Fluck were highly amusing in their monk disguises harmonizing on “Pilgrims of Love.” The three also provided delightful clog-clicking accompaniment to Brittingham’s infectious “Jeanette and Her Little Wooden Shoes.”

Cotterell was a thoroughly convincing cad as he explained his flirtatious ways in “The Game of Love,” and later dueted with Brittingham on “Talk About This – Talk About That.” Slywotzky got to showcase her rich soprano on Dame Paula’s “What She Wanted – And What She Got” sung, on this occasion, as a duet with Fluck’s Mikel. 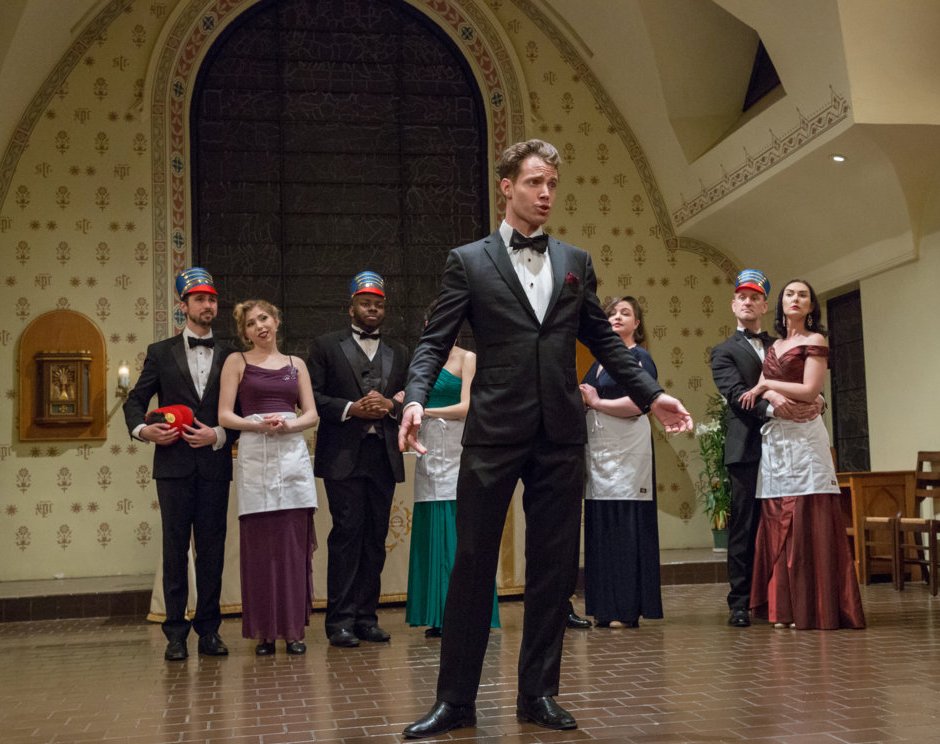 Mott took the occasion to announce next year’s very enticing season – one with a distinctly Gallic theme – Babette, Madeleine, and Mlle. Modiste.