While German or Austrian theatres regularly programme classic Broadway musicals, Spain’s lyric theatres only rarely enter this attractive universe, though when they do they often produce a happy stir among their audiences. This was the case with the production of Lady, Be Good! seen at Madrid’s Teatro de la Zarzuela in 2015. The latest example has come from one of the most important venues in Spanish musical geography, the Teatro Campoamor in Oviedo (the capital of the Principality of Asturias on the Cantabrian coast), whose zarzuela season is the second most important in the country after that of the Madrid coliseum itself. 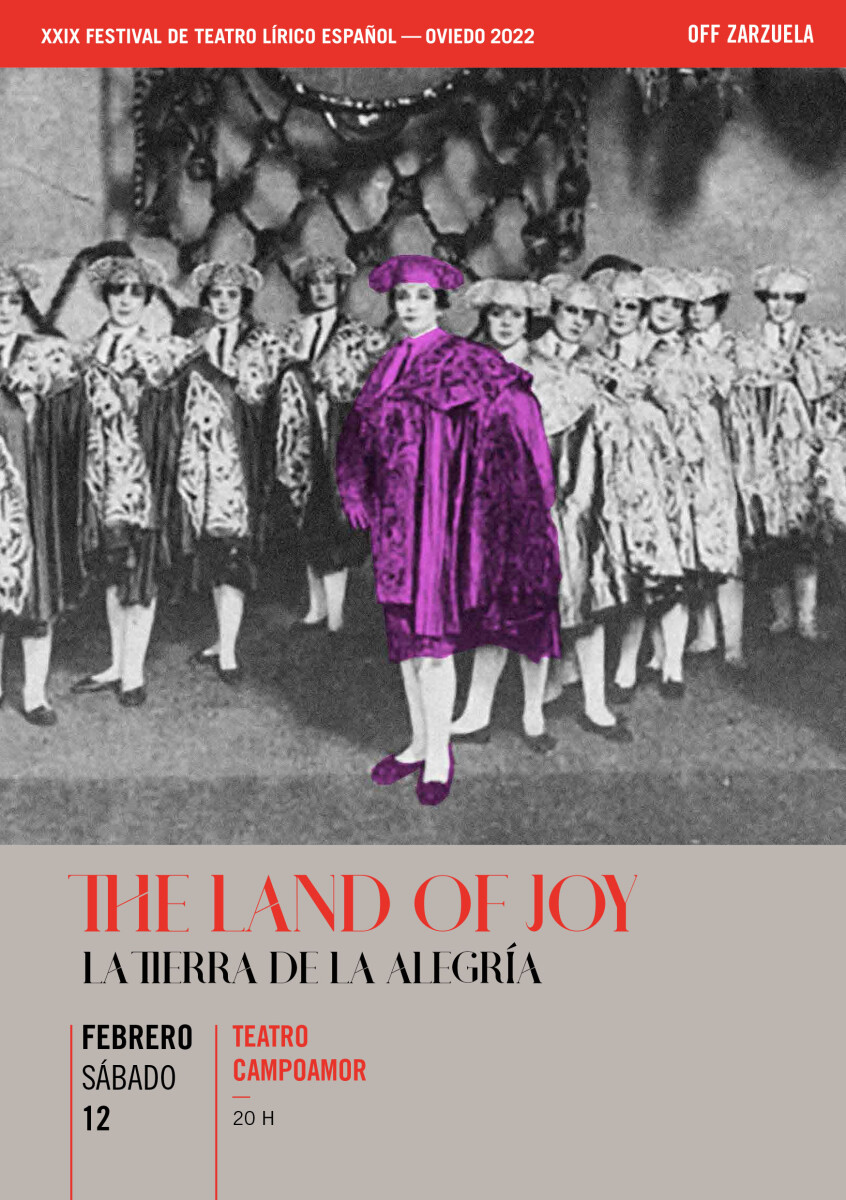 Poster of the production of “The Land of Joy”, 2022. (Photo: Teatro Campoamor, Oviedo)

The Off festival of the Campoamor season has included an unusual stage revival of a fantastic review in a prologue and two acts entitled The Land of Joy, a work that had been premiered at the Park Theater in New York in 1917. It is a revue of great spectacle with music by Joaquín Valverde Sanjuán, better known as Quinito [diminutive of his first name] Valverde, to distinguish him from his father Joaquín Valverde Durán, the mythical collaborator of Federico Chueca. 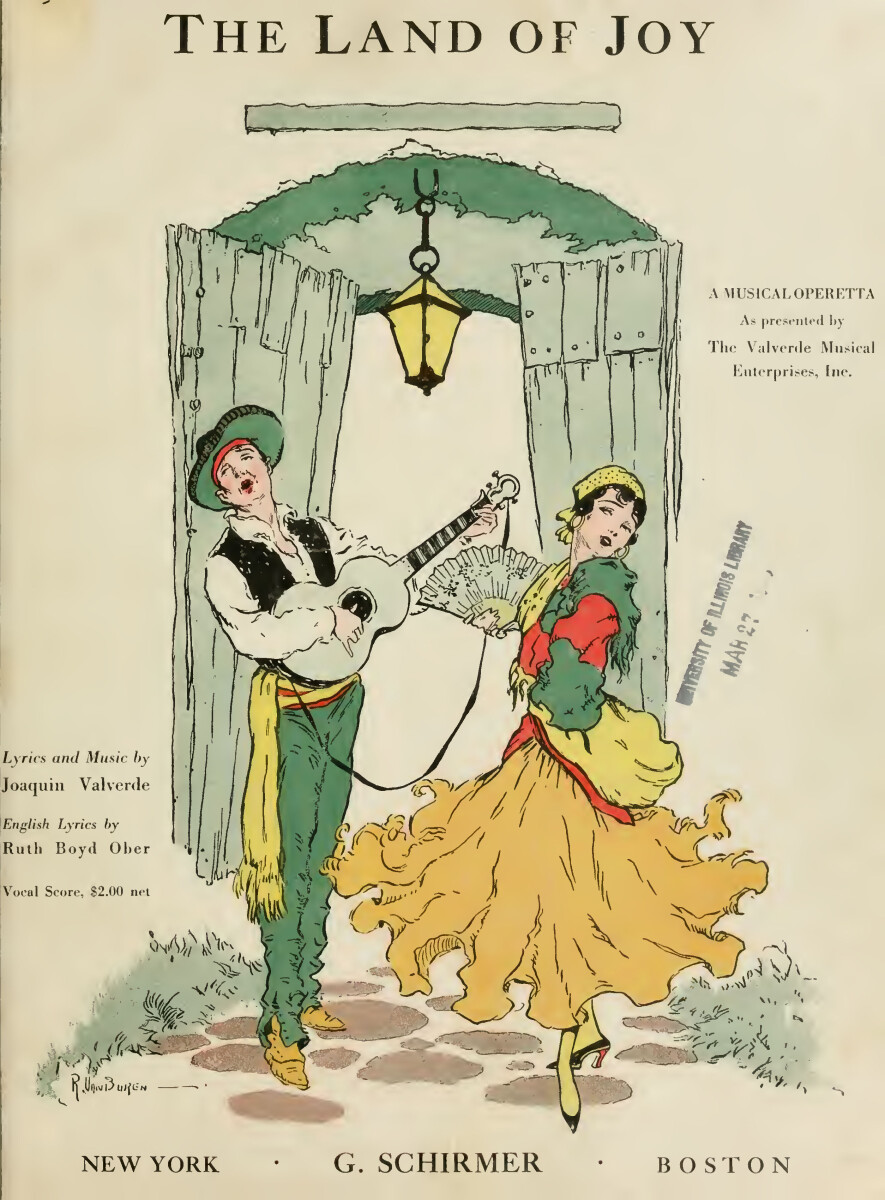 Illustration by R. van Buren for the vocal score of “The Land of Joy” published by S. Schirmer in 1918. (Photo: IMSLP)

The Land of Joy was a successful piece and the high point of  Quinito’s intense musical career (he died a year after the premiere). From his compositional beginnings as a child prodigy in Madrid in the late 1880s at the age of only 14, maestro Valverde Jr. developed a very fertile creative career, enjoying an extraordinary popularity in Spain that radiated to other places in Europe and America.

He cultivated musical theatre and song, worlds that for him were two sides of the same coin in tune with the evolution of popular urban music produced in the West since the turn of the century. 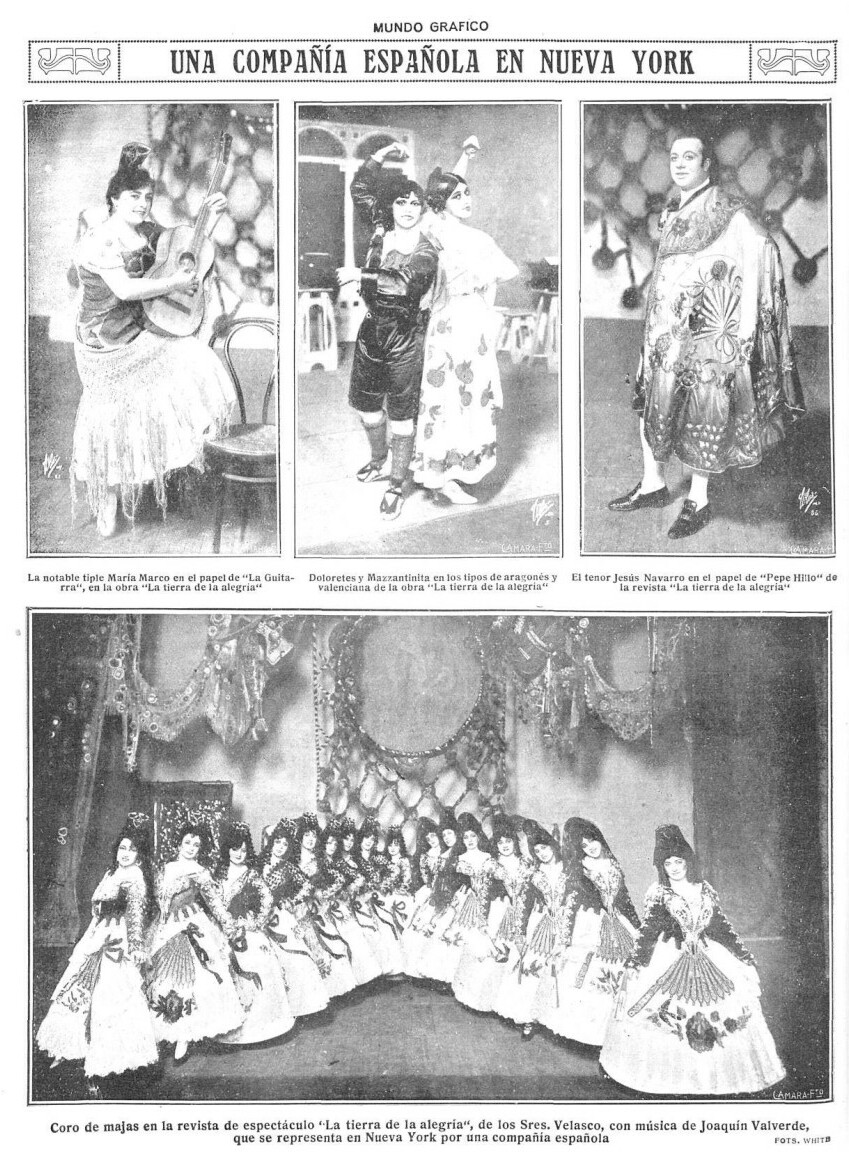 Quinito Valverde was very conscious of the use of the media for professional promotion and projected through them a fun and dynamic image in keeping with his sparkling and highly inspired music. In the first decade of the 20th century he settled for several years in Paris, bringing to its stages and those of Brussels celebrated scores for revues and variety shows.

Perhaps from that period is the title of his catalogue that has most endured in the collective memory: the song Clavelitos, recorded by great singers of all times.

His leap onto the American stage happened thanks to the Velasco brothers, restless theatre impresarios who produced big-budget revues; they took him to countries such as Argentina, Uruguay, Cuba and Mexico from 1914 onwards. 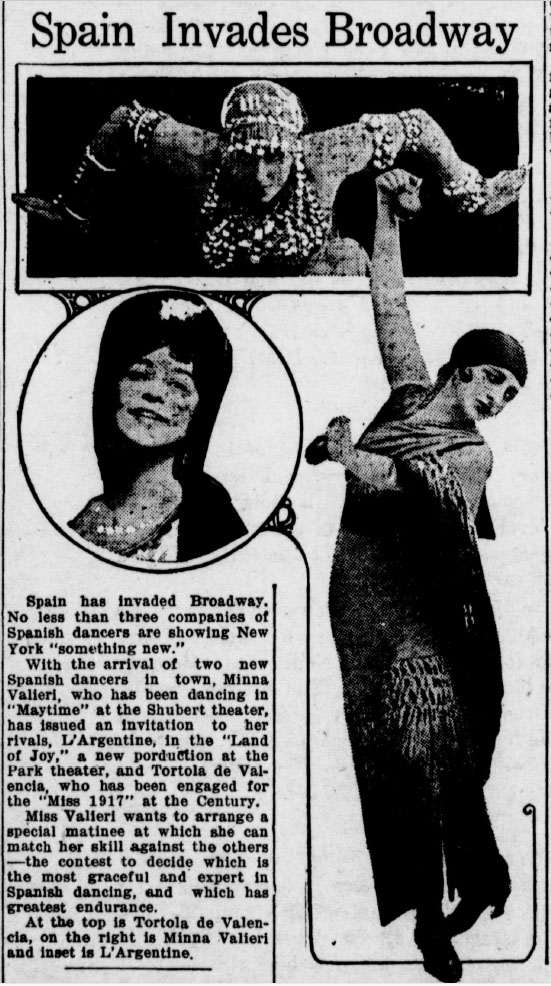 It was precisely at Havana’s Teatro Nacional that The Land of Joy was previewed under the title Mujeres y flores a few weeks before its Broadway premiere. Its libretto, written by Mexican playwright José Francisco Elizondo in collaboration with producer Eulogio Velasco, was adapted into English by Ruth Boyd Ober, although she kept part of its lyrics in Spanish, to produce an exotic effect on the New York audience.

One of the express aims of the show was to attract the audience by selling them three hours of “Spanish authenticity” (the score is made up of more than thirty numbers), with songs and dances based on the romantic clichés of Spanish identity.

Quinito Valverde reused, as was his usual practice, some hits from his career, such as the very popular song by Serafina from Gente menuda (1911) so that there was no lull in applause between one number and the next.

Since the previous year (when Enrique Granados’s opera Goyescas had premiered at the Metropolitan), New York had been suffering from a Spanish fever that at the same time fed the entertainment needs of a Hispanic and Spanish colony of growing importance in the economic capital of the United States. 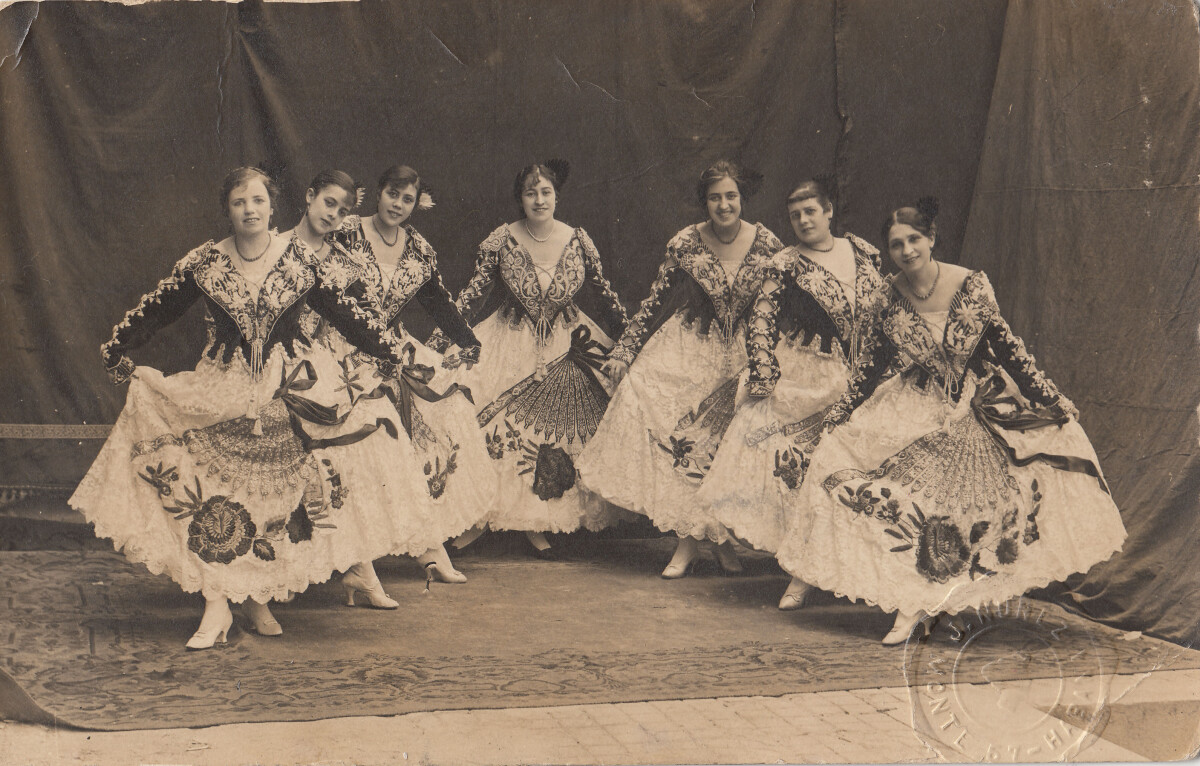 The Velasco’s show had a large budget and managed to run for a hundred nights, first at the Park Theatre and then at the Knickerbocker Theatre, before enjoying a long tour of different American cities (including venues in Washington and Boston) and a subsequent tour of Latin America that lasted until 1922.

Of all the artists in the Broadway cast, partly American and partly Hispanic, we can highlight the sopranos María Marco, Luisita Puchol and Amparo Saus, the actor Jesús Navarro and the famous dancers Antonio Bilbao and La Argentina, the latter incorporated after the premiere. 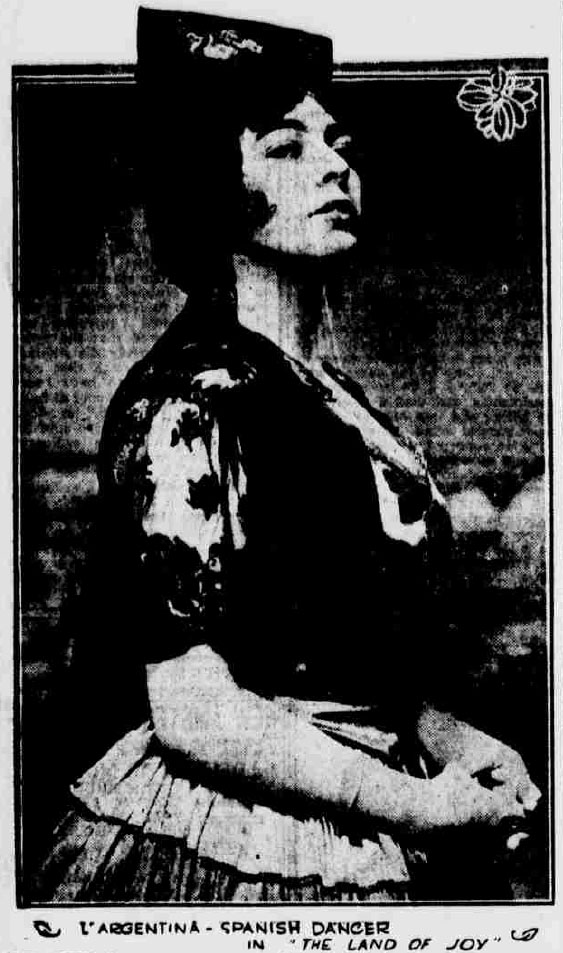 The project to recover this title in Oviedo arose from a double circumstance: the academic work of Miriam Perandones, professor of musicology at the University of Oviedo, and the opportunity to organise the exhibition Emigrantes Invisibles. Españoles en EEUU, 1868-1945 held consecutively at the Centro Cultural Conde Duque (Madrid) and at the Centro de Cultura Antiguo Instituto de Gijón (Asturias).

Perandones, a great specialist in Granados, has devoted part of his research energies to unravelling the circumstances of the musical presence of Spanish composers and performers in the United States at the beginning of the 20th century, the period in which Quinito Valverde’s career took place. Thinking of providing a sound complement to the exhibition project during her stay in Asturias, the curators James D. Fernández and Luis Argeo managed to involve Professor Perandones to make it possible for this currently invisible migrant musical theatre to be rescued from oblivion in parallel with the return to our memory of these Spanish immigrants in the halls of the Gijón institute. 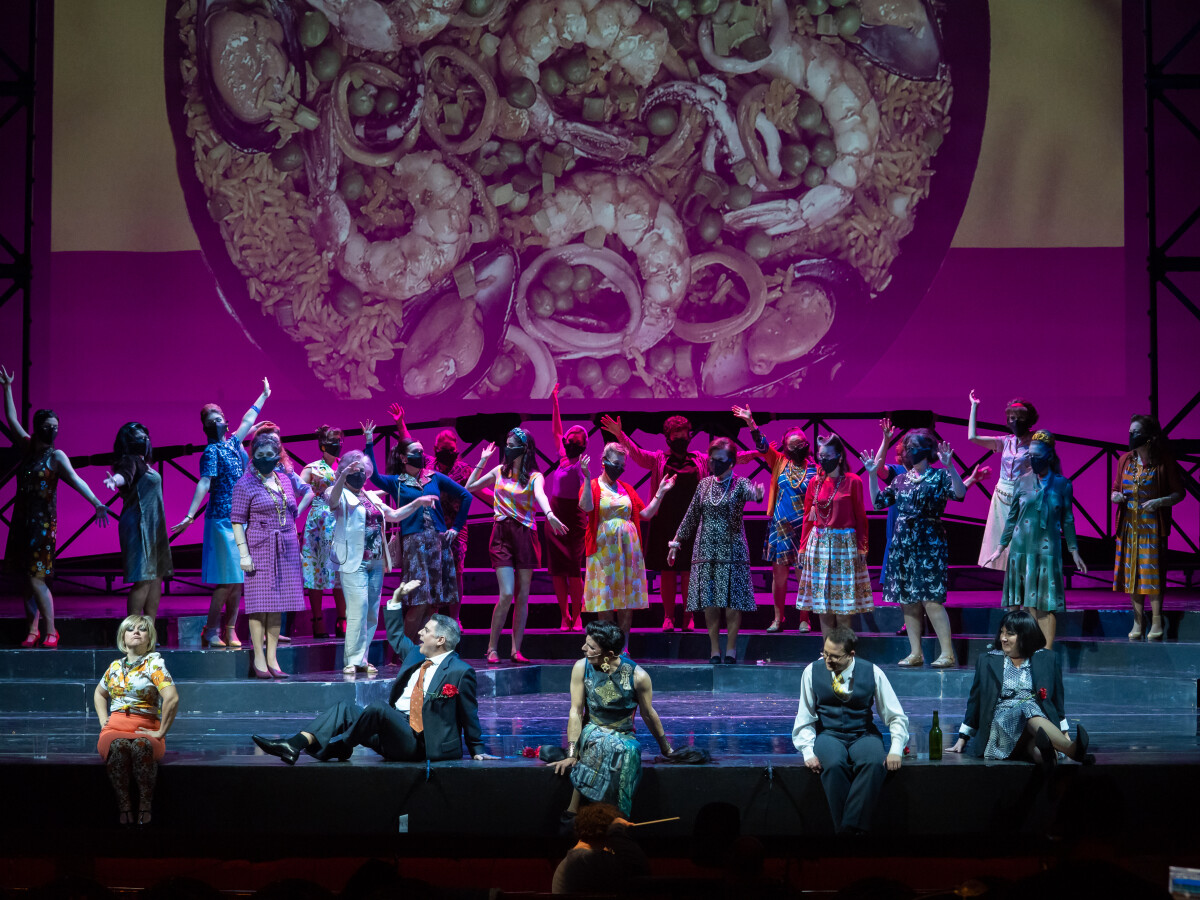 The task was not easy: although the vocal score of the work was published in 1918 by the firm S. Schirmer, there was a lack of orchestral material. The orchestration with which it has been performed in the Teatro Campoamor has been reconstructed by the composer, pianist and music editor Borja Mariño, in a titanic work halfway between the creative and the archaeological.

The libretto of the revue was never published although, fortunately, the Library of Congress in Washington preserves a typewritten copy. From the main lines of force of the story (which was revised during its months on Broadway as the New York press testified), the playwright Susana Gómez has written a new and fluid text that essentially maintains the idea of selling Spain to the Americans but which is, above all, at the service of Quinito’s infectious music.

The work has undergone a reduction in musical and textual content (with approximately two-thirds of the score remaining), resulting in a one-act show of around an hour and a half. 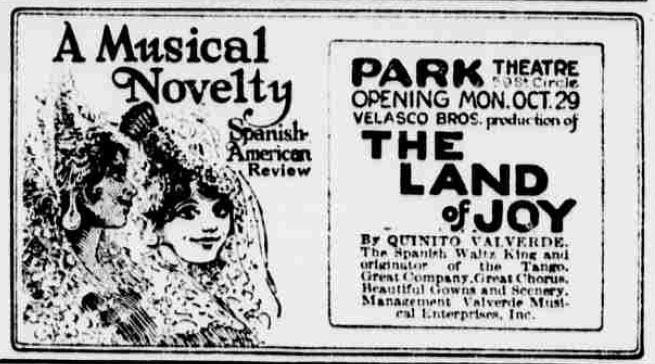 “The Land of Joy” advertisement in the billboard pages of The Sun. (Photo: The Sun, 21 November 1917, Chronicling America: Historic American Newspapers. Lib. of Congress.)

The stage production has been entrusted to a young director increasingly involved in the world of zarzuela, Bárbara Lluch, who has played with the difficult task of dealing with a recreation of Spanish clichés in their own national context, something approached from the point of view of humour. 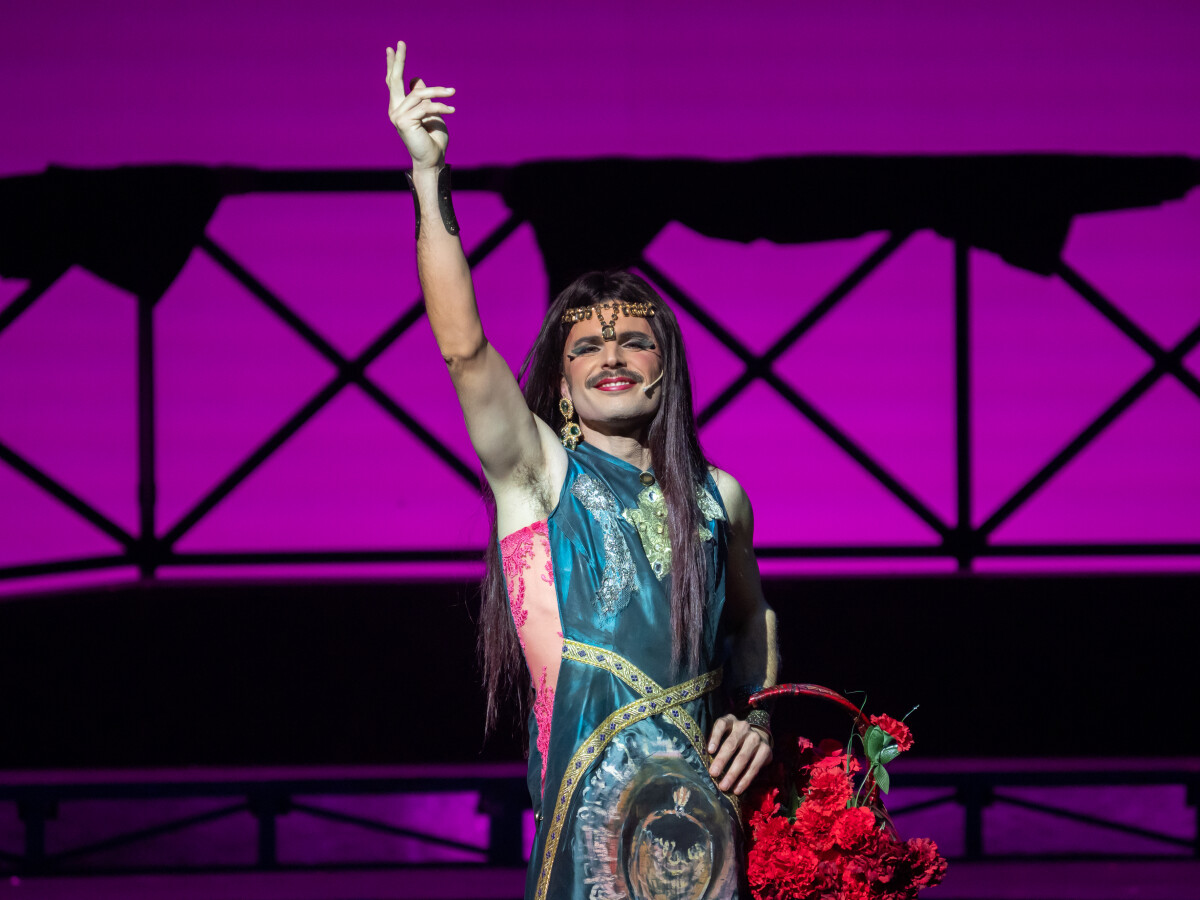 In the pit was the experienced maestro José Miguel Pérez Sierra, the ideal baton for music of an eminently popular nature. The cast was led by the actor Alberto Frías and the lyric singers Beatriz Díaz, Marina Pardo and David Menéndez, and the popular artist Rodrigo Cuevas, “spearhead of the electrocuplé, sex symbol of the copla and total artist” took part in the finale to great effect.

We hope that this project, conceived in the margin of a season but so well prepared, will not be reduced to a single performance, and that a much wider public will be able to enjoy the surprising return journey of this attractive Broadway zarzuela.

For more information on the Zarzuela Season at Oviedo’s Teatro Campoamor, click here.

You can find the article “Reception of Musical Hispanism in New York at the Turn of the 20th Century and the ‘Boom’ in Spanish Lyric Theatre through the Work of Enrique Granados and Quinito Valverde” by Miriam Perandones here (as a PDF).