The Victor Herbert Renaissance Project LIVE! is launching its fourth season with The Red Mill, Broadway’s longest running success by Victor Herbert and Henry Blossom and a particular ‘Dutch’ favorite here with us at the Operetta Research Center Amsterdam. (Obviously.) 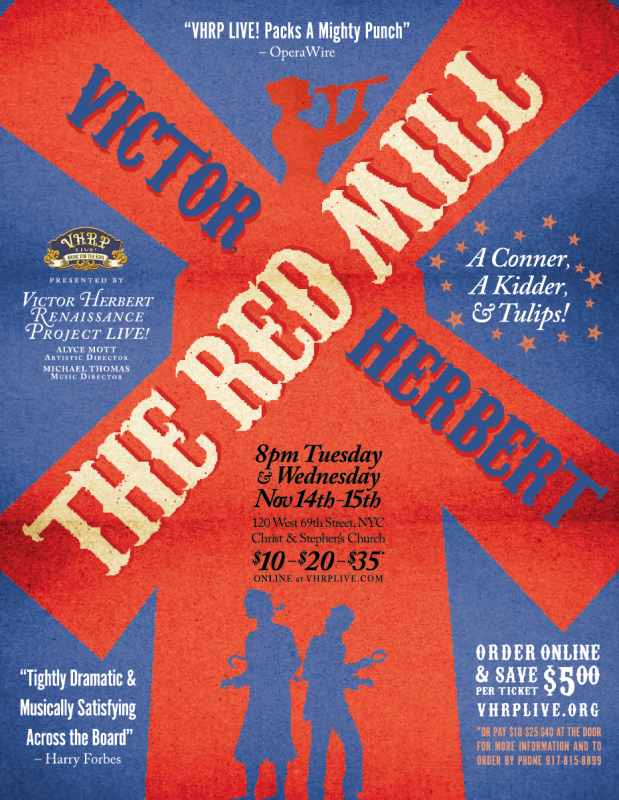 The Red Mill, a 1906 musical comedy, is the story of how two American con men, Con Kidder (Bass/Baritone Matthew Wages) and Kid Conner (Tenor Drew Bolander), broke, stranded in Holland, agree to aid a damsel (Soprano Sarah Caldwell Smith) in distress. She is being forced by her father the Burgomaster (Baritone Anthony Maida) to marry for old musty prestige – a governor (Baritone David Seatter) – while her true love (Tenor Christopher Robin Sapp) is sailing the bounding sea. Madcap capers involving the legend of an old mill run by the Burgomaster’s sister (Soprano Vira Slywotzky) quickly land our lovers in jail, but the day is saved as Sherlock Holmes and Dr. Watson ride to the rescue!

The Red Mill opened on Broadway September 24, 1906 with musical numbers including “Moonbeams,” “The Isle of Our Dreams,” “The Streets of New York,” “Everyday is Ladies’ Day With Me” and “Just Because You’re You.”

The musical comedy became the single most financially successful Herbert work to ever grace a Broadway stage, running 274 performances the first time out and adding another 531 Broadway performances when it was revived at the Ziegfeld Theatre in 1945.

Artistic Director of VHRP LIVE!, Alyce Mott, explains “The Red Mill was written for the famous vaudevillian team, David C. Montgomery (1870-1917) and Fred A. Stone (1873-1959). The two men became partners in 1896 and roared to Broadway fame as the Tin Man and the Scarecrow in the 1903 extravaganza Wizard of Oz.“ Mott adds “The Red Mill’s producer Charles Dillingham made theatrical history by adding a revolving, electrically lit red windmill to the top of the Knickerbocker Theatre, giving the Broadway theater district its first trademark signage spectacle. Between Montgomery and Stone and the moving sign, Broadway had a new hit filled with the music of Victor Herbert.”