Stage director Walter Felsenstein (1901-1975) is famous for various things: he founded the Komische Oper in East Berlin after WW2 and opened the house in Behrenstraße with Die Fledermaus. He ran this institution for many years, creating his unique style, and delivered many famous operetta interpretations. The most celebrated of which was Offenbach’s Ritter Blaubart, available on DVD. Now, dramaturg and journalist Boris Kehrmann has published Eine dokumentarische Biographie 1901 bis 1951 in two volumes, containing many never before published documents that shed new light on Felsenstein’s pre-Komische Oper days, and his operetta work in the Germany provinces. 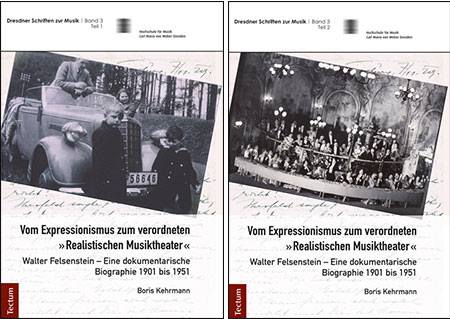 It was not easy for Mr. Kehrmann to get these often intimate, highly detailed Felsenstein letters published, because officially they did not exist – according to Felsenstein’s second wife and her sons, the heirs of the estate and copyright. But here, now, is a close look at the fascinating early career of Felsenstein and the many operettas he put on the stage in Nazi times, in small provincial theaters.

Boris Kehrmann already presented some of his points at a conference in Dresden some time ago, namely that the performance style of operetta under the Nazis stayed more or less unchanged in the provinces because “mediocre” performances always stayed “mediocre”, and the big break in term of operetta history happened on the big splashy stages of Berlin and Vienna with their world-class performers, not in tiny towns near the Czech or Polish border, where Felsenstein started out.

Mr. Kehrmann is always a thought provoking author, even if you do not agree with his sometimes radical conclusions or observations. This two-volume biography of Felsenstein’s early years is a must-read for all fans of German “Musiktheater” as we know it today, but also for operetta fans. Because it offers unique documents on a performance situation that is usually not covered by the press and rarely touched upon in the major operetta histories.