Though an unfortunate scheduling conflict prevented my attending this delightful company’s second annual symposium as I did last year, I was, at least, able to catch the very last performances of all seven of this season’s productions, which proved to be a terrific wallow in the world of operetta and musical comedy. The range of Ohio Light Opera (a veritable repertory company for the duration of the season) is really quite stunning, especially when one experiences all of the productions in close succession. OLO players effortlessly morph from ensemble to supporting character to lead and back again to ensemble, while several veterans take on multiple starring roles with extraordinary ease. 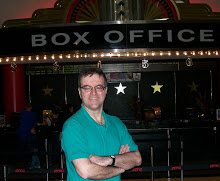 As is true in any rep situation, not every single role is a perfect fit in terms of physical makeup or personality, but more often than not, the match-up of player to part is uncannily good.  Add to this, admirably high musical values from a first-rate orchestra and a handful of fine conductors, excellent direction (often by OLO Artistic Director Steven Daigle), and handsome sets (Cassie King) and costumes (Stefanie Genda), and you have results far outclassing typical summer stock fare.

Respect for the original material is key, and OLO eschews adaptations and abridgements, making minimal nips and tucks where necessary for the resources of the company as, for instance, trimming some of the ballet music. Thus, this season’s production of Can-Can adhered to Abe Burrows’ original book, unlike the recent Paper Mill production.

Audiences this year seemed to favor Ruddigore, Can-Can and Oh, Kay! This last was George and Ira Gershwins’ 1926 musical which recently served very loosely as the basis for Broadway’s “Nice Work If You Can Get It.” With its Guy Bolton and P.G. Wodehouse book, the farcical story of Long Island bootleggers who turn a newlywed playboy’s life topsy-turvy was a fast-moving riot with the classic songs (“Someone to Watch Over Me,” “Clap Yo’ Hands,” “Maybe”) satisfyingly performed in period style.

The versatile Nathan Brian, a deft farceur and commanding vocalist, played the love-struck befuddled playboy, and Emily Hagens (an OLO newcomer) was a delightfully English Kay, the role originated by the great Gertrude Lawrence.

Earlier in the day, Brian played the romantic hero of Brigadoon and Hagens was the heroine’s sister Jean whose wedding is the focal point of much of the action. Other comic roles were smartly taken by Samus Haddad as Shorty McGee and Kyle Yampiro as Kay’s bootlegging brother, the Duke of Durham. The whole was finely directed by OLO mainstay Ted Christopher about whom more below. 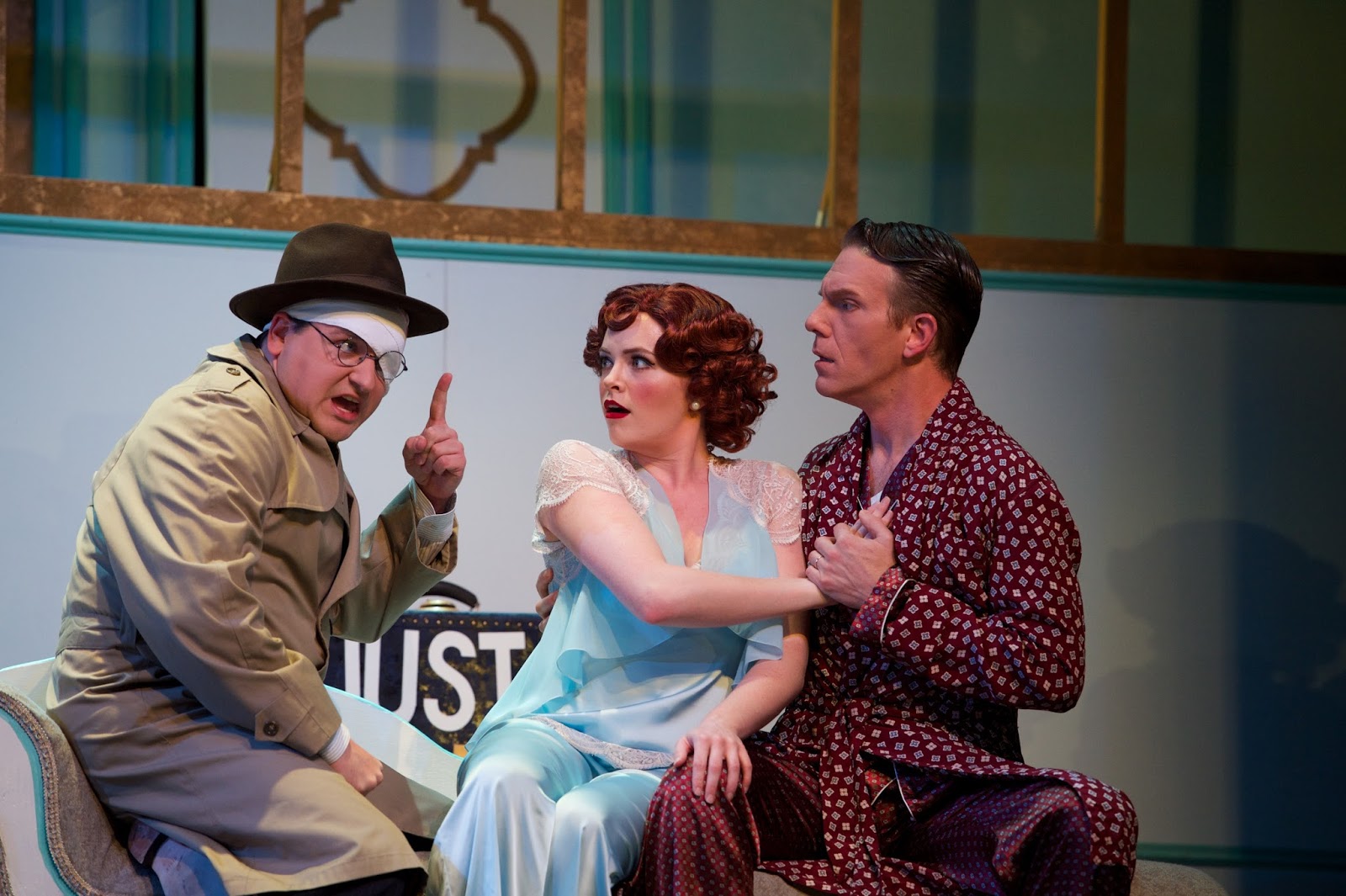 The two Gilbert & Sullivan offerings this season were The Yeomen of the Guard and Ruddigore. Both were strongly cast, with the former, under the direction of Julie Wright Costa, packing a real dramatic wallop as Jack Point (poignantly played and strongly sung by Mr. Christopher) truly expired at the end (Gilbert’s stage direction indicates he merely “falls insensible”) as Elsie (Emily Nelson) weds her Colonel Fairfax (Clark Sturdevant). Nelson handled her vocal chores with ease including the escalating climax of “‘Tis Done! I Am a Bride!”, and tenor Sturdevant, an asset to many of the season’s productions, shone with crystalline perfection on “Is Life a Boon?” and “Free from His Fetters Grim.” Olivia Maughan was a particularly rich voiced and satisfying Phoebe, and her scenes with Brad Baron’s likable Shadbolt amusing. J. Lynn Thompson conducted with fine style and appropriate gravitas. 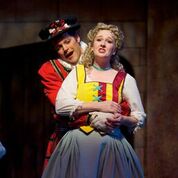 A scene from the 2015 “Yeomen of the Guard” at Ohio Light Opera. (Photo: Matt Dilyard)

If Yeomen shows off its immortal creators at their most serious-minded, Ruddigore – a spoof of Victorian melodrama – is one of their drollest creations, and OLO played the comedy to the hilt. I might even rate this production – cannily directed by Daigle and masterfully conducted by Steven Byess – the best Ruddigore of my experience. Brian showed off yet another facet of his comic talents as farmer Robin Oakapple who tries vainly to disguise his true identity as a baronet of Ruddigore, duty bound to commit a crime a day. The chameleon-like Ted Christopher made a delicious Sir Despard, and Sarah Best mined every possible comic nuance from Mad Margaret. Tenor Stephen Faulk – another man of many faces and comic personas – was an amusingly conflicted Richard Dauntless, making the most of miming what his heart was ever “instructing him” to do. Julie Wright Costa’s formidable Dame Hannah and Brad Baron’s Sir Roderic were further comic and vocal pluses, and gave their “Little Flower” duet the requisite poignancy. 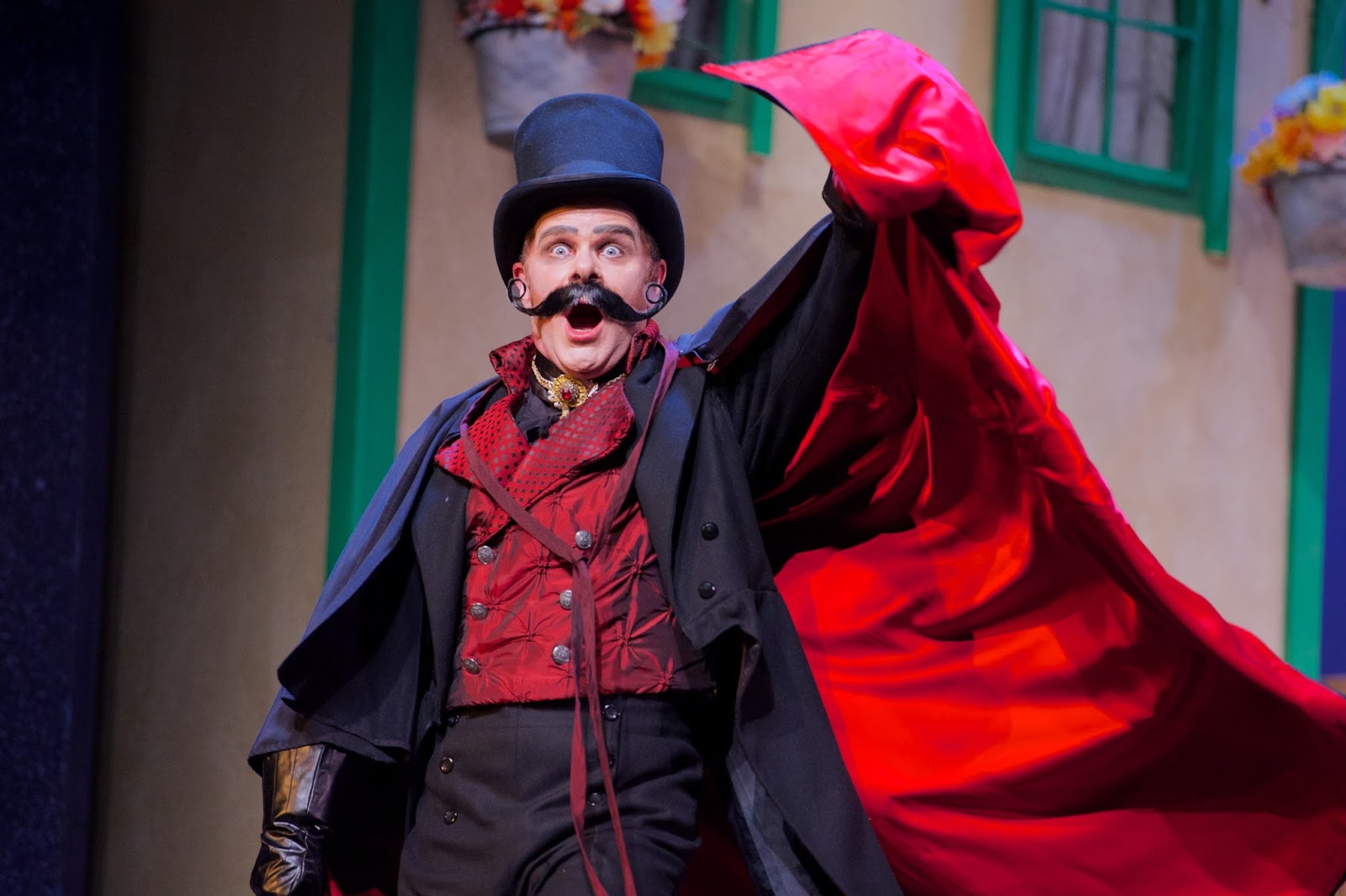 Katherine Polit – as self-centered Rose Maybud who makes nary a move without consulting her book of etiquette – captured the vanity and silliness of the character to perfection, and the next day, reappeared as Fiona, a tremendously appealing and warmly sympathetic Scottish lass, in Brigadoon opposite Brian’s full-throttle leading man role of Tommy. His “There But For You Go I” and “Almost Like Being in Love” – under Thompson’s assured baton — were outstanding. Elsewhere, Faulk’s tenor rang out exuberantly on “I’ll Go Home with Bonnie Jean” and then tenderly on “Come to Me, Bend to Me.” Jacob Allen directed resourcefully, and if not all the casting was entirely apt, the whole was still greatly moving. 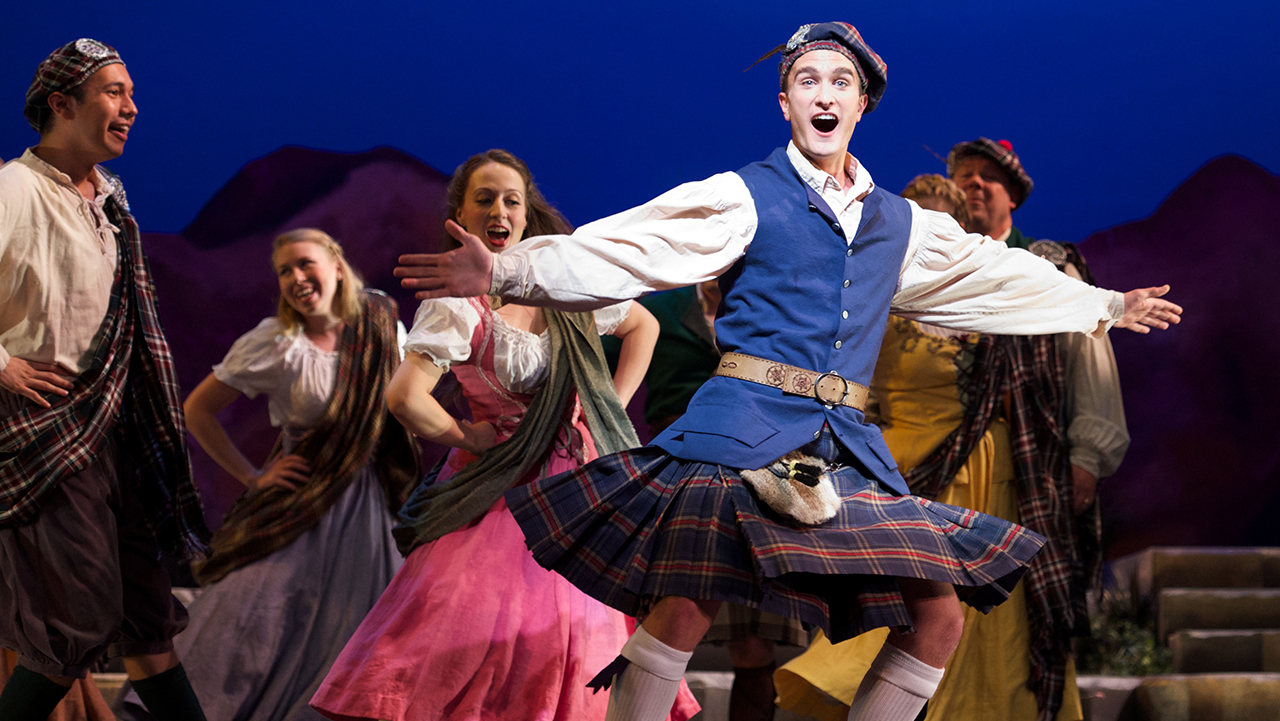 Cole Porter’s tune-filled 1953 Can-Can – derided by critics originally – continues to be revived thanks primarily to its hit parade of now-classic tunes (“C’est Magnifique,” “I Love Paris,” etc.). The book – centering on a new judge’s efforts to ban the then-notorious titular dance in 1893 Paris – is admittedly rather ho-hum. But Christopher – who can do no wrong in whichever role in plays – was outstanding as Judge Forestier, and Faulk had his second most amusing role as the hopelessly mediocre Bulgarian artist Boris. His comic scenes were wonderful set pieces that earned warm applause and empathetic chuckles. As La Mome Pistache, proprietor of the Bal du Paradis cabaret, Sarah Best – the picture of a savvy Montmartre businesswoman — sang those Cole Porter evergreens with creamy burgundy tone, if perforce lacking the high voltage star power of some of the great Broadway ladies who have played the part. Directed by Daigle and choreographed by Carol Hageman (including a Garden of Eden ballet), the show had the requisite Broadway pizzazz. 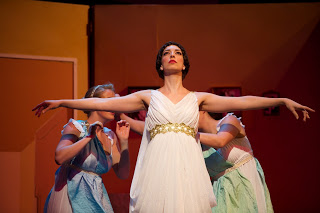 Sarah Best in the title role of “One Touch of Venus.” (Photo: Matt Dilyard)

Incredibly, Best took on the title role in Kurt Weill’s One Touch of Venus that same evening, rather in the fashion of Callas’ legendary assumption of disparate Wagner and Bellini roles within a single week. As the goddess’ statue come to life, she cut a striking figure, sang “Speak Low” and “A Stranger Here Myself” stunningly, only perhaps falling short on some of the naïveté so essential to the role. Benjamin Krumreig, amusing in a non-singing comic role in Oh, Kay! demonstrated a gleaming tenor as barber Rodney Hatch on whom Venus develops a crush. Baron, though too youthful for art collector Whitelaw Savory, pulled it off. Weill’s characteristic score, including the somewhat jarringly grim “Dr. Crippen” number, sounded splendid under Byess’ baton. King’s Expressionist set fit the artistic setting.

And Daigle’s direction only misfired near the end by eschewing the customary ending of the actress playing Venus (once again a statue) returning to Rodney in the guise of an ordinary young woman.

The rarest work this season was Franz Lehar’s soft-grained if ultimately touching Friederike (in the English-language translation of Adrian Ross and Harry S. Pepper used originally in London). Cassie King’s set was arguably the loveliest of the bunch as were, likewise, Charlene Gross’ 18th century costumes. This fictionalized story of an early romance between the poet Johann Wolfgang von Goethe and the daughter of a village parson was feelingly conducted by Wilson Sutherland, and directed in apt style by Daigle. Some passages for a boisterous male chorus and lighter numbers for the secondary couple aside, the overall impression was rather mild, even with such Lehar chestnuts as “Why Did You Kiss My Heart Awake?” and the oft-reprised “O Maiden, My Maiden.” Meagan Sill and Clark Sturdevant (the latter a more matinee idol Goethe certainly than creator Richard Tauber) handled the near-operatic score more than capably, and Gretchen Windt and Stephen Faulk did nicely as, respectively, the heroine’s sister and the lovelorn student with a crush on both young women. Still, it was wonderful to finally see the work, known here principally from recordings. 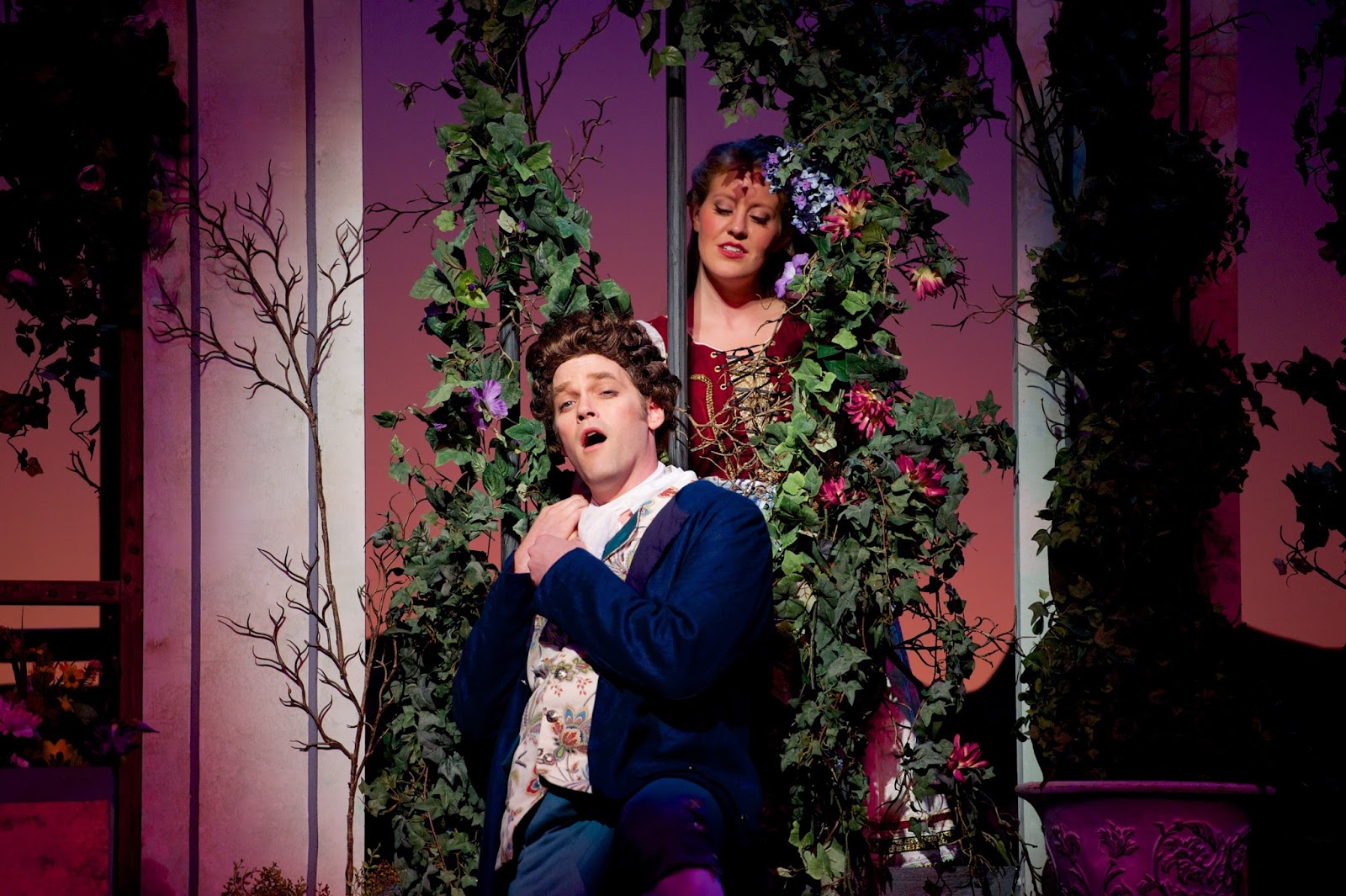 Despite no symposium, I was, at least, able to catch two entertaining and informative talks by OLO board chair Michael Miller who, together with his indefatigable wife Nan, had put the symposium together. One was a fascinating collection of operetta clips from film and TV; the other a talk on Oh, Kay! just before the performance. On Saturday, Daigle offered a pre-talk on One Touch of Venus and fielded questions from the packed lecture hall.

Lovers of musical theater won’t find a finer feast than here in Wooster, under the leadership of Executive Director Laura Neill. Solidly professional, loaded with bright young talent, comfortably in tune with the traditions of European operetta and Broadway, the experience continues to be eminently satisfying.