In his new book Der Klang von Paris – “The Sound(s) of Paris” – Volker Hagedorn embarkes on “a trip to the musical metropolis of the 19th century.“ His much praised publication isn’t primarily about Jacques Offenbach as the man whose music embodies, for many, the buzz and fizz of the Second Empire and a uniquely French joie de vivre. But Mr. Hagedorn does get to Offenbach eventually, on page 239, when he starts talking about Patachon and Giraffier: the two characters in Les deux aveugles or The Blind Beggars, the one-act operetta that opened the Bouffes Parisiens on 5 July 1855. 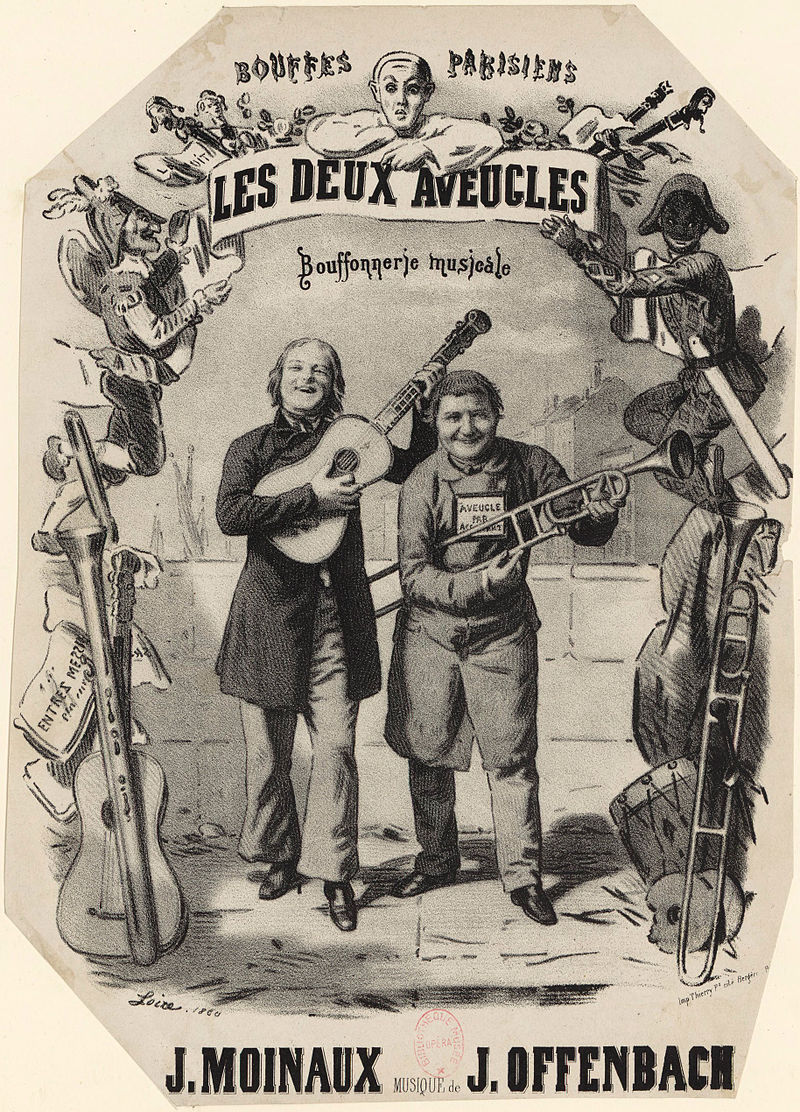 What made these two blind beggars so unique is the fact that they were operetta’s first male comedy duo, embodied by Jean-François Berthelier (Giraffier) and Étienne Pradeau (Patachon), one playing a mandolin, the other a trombone, both singing a bolero, and both cracking a never ending string of (political) jokes. Many of them apparently delivered to Offenbach’s librettist Jules Moinaux by the Count de Morny, Offenbach’s powerful protector and enabler.

To pull off a show such as Les deux aveugles you don’t need great voices, you need great timing and you need to be able to deliver lines meaningful enough to make audiences think: how much truth is there in these sly jokes?

As Kurt Gänzl wrote about such early operettas: “They were pieces that were written with a zany, Monty-Pythonesque type of burlesque humour, extravagantly – even ridiculously – funny.“ In the decades that followed, there have been many famous male comedy teams in the entertainment industry: Abbott and Costello, Gallagher and Shean, Laurel and Hardy, or Dean Martin and Jerry Lewis, many of them performing musical numbers with a dead-pan humor. Some of them became part of operetta history. 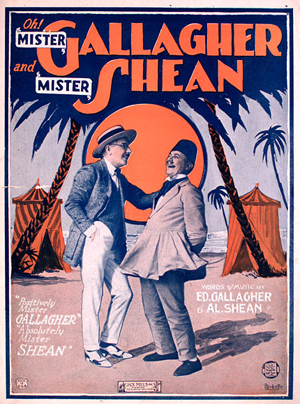 While sitting in Berlin’s Bar jeder Vernunft this week, to watch the comedy duo Ass-Dur, I had to think of Patachon and Giraffier and Volker Hagedorn’s book. The two young comedians, Benedikt Zeitner and Dominik Wagner, are performing four cycles of their three-part “Werkschau” till Easter – self-ironically labeled a “Bühnenweihfestspiel.” 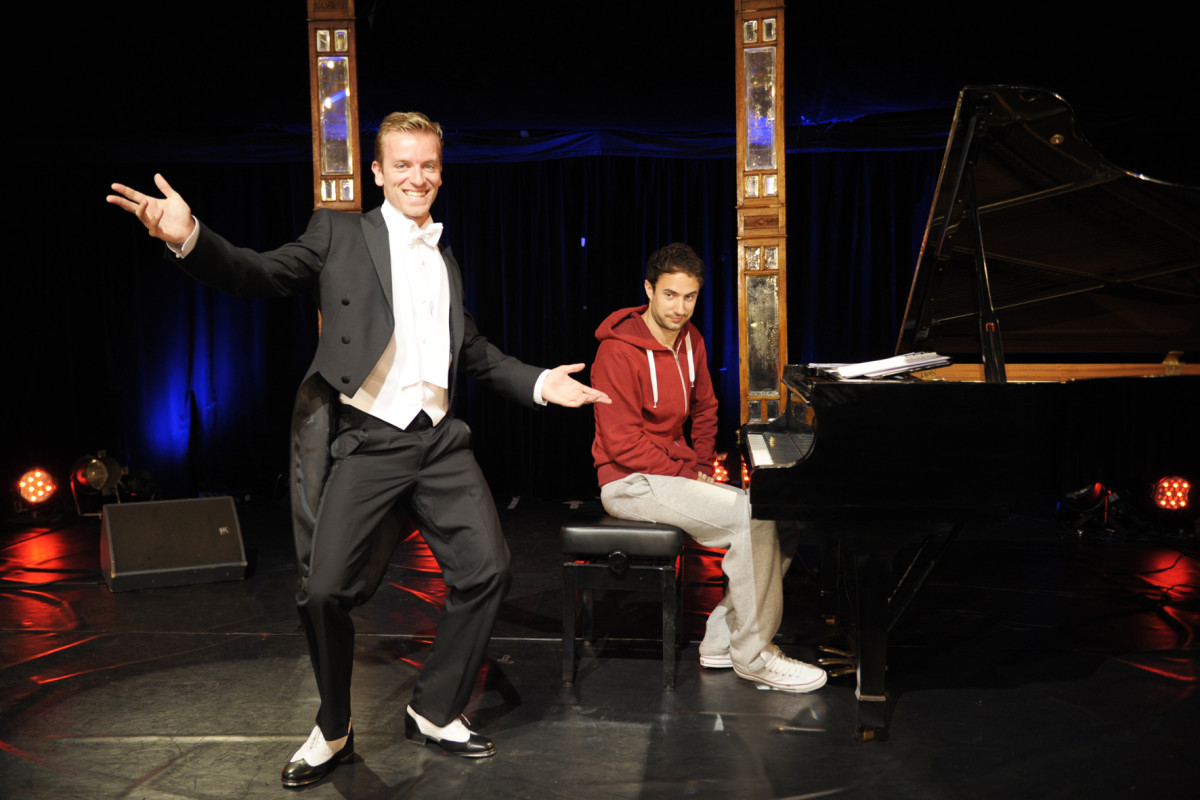 What makes the two gentlemen so endearing and successful is that their on-stage personas are a total contrast and keep bouncing off of each other: the pseudo-intellectual and self-important Mr. Zeitner as an opponent to the down-to-earth and street smart Mr. Wagner. They play the piano together and deconstruct the classics: turning the tunes of football chants into Mozart and Beethoven compositions, taking Schubert’s Winterreise apart while trying to render “Der Leierkastenmann.” They do magic tricks, they strip, they get dressed again while playing four-handed piano, they include ludicrous lectures on the history of hip hop, throwing big musicological words around, as well as sneering social insults that are anything but politically correct. But always with a smile!

It’s astonishing to watch the naturalness and ease with which they include the front row audience, deliver their routine lines, and improvise in between. And they sing: for example a power ballad, with lyrics taken from a cook book. The effect of this mismatch is not unlike Offenbach’s technique, which is probably why Patachon and Giraffier came to my mind.

Also, the tiny Bar jeder Vernunft with its intimate atmosphere is not unlike what the Bouffes Parisiens might have been like. And if Les deux aveugles captured the “Sound(s) of Paris” back in 1855, then Ass-Dur captures the sounds of Berlin in 2019: everything is a joke, nothing and no-one is taken seriously, everything is mixed together from Schubert to Michael Jackson, from medieval chant to rap. But there is a touching melancholy and even love underneath it all. And there’s an appreciative audience of great diversity. Add to that the highly attractive service personnel, and you are pretty close to operetta heaven.

As far as I am aware, Benedikt Zeitner and Dominik Wagner have not performed any operettas. And the Bar jeder Vernunft has not done so since the glory days of Im weißen Rössl back in 1994. (Their recent Frau Luna played at Tipi am Kanzleramt, i.e. a different venue.)

Having modeled their shows on the three part sonata form – “1. Satz – Pesto,” “2. Satz – Largo maggiore,” “3. Satz – Scherzo spirituoso” – the team has more or less come to the end of their classic cycle. So what next? A “Symphonie fantastique” or “Pathétique”? Another Christmas program? Yes, all of that is possible and will be fun to see. Though watching their current shows three nights in a row you realize that there is a lot of repetition, and that it might be time for a next step. Towards new horizons and challenges.

You’ll recall that Les deux aveugles are part of the film Offenbach’s Secret by Academy Award winning director István Szabó. The other one-act show included is Croquefer, ou Le dernier des paladins. The performance of these two operettas in the movie by opera stars Laurence Dale and Graham Clark is not particularly“zany,” “Monty-Pythonesque” or “extravagantly funny” – things that Ass-Dur are. Always. And convincingly. What you do get, in Mr. Szabó’s version, is a lot of background information on Count de Morny. Which makes the film well worth watching.

So if anyone plans to commemorate the Offenbach bi-centenary this year with a special treat (and recording): get Benedikt Zeitner and Dominik Wagner onto the stage and give them the Offenbach script. The story of two cynical and fake beggars trying to rip off tourists could work very well with contemporary Berlin audiences. Mr. Zeithner and Mr. Wagner certainly work very well with Berlin audiences. 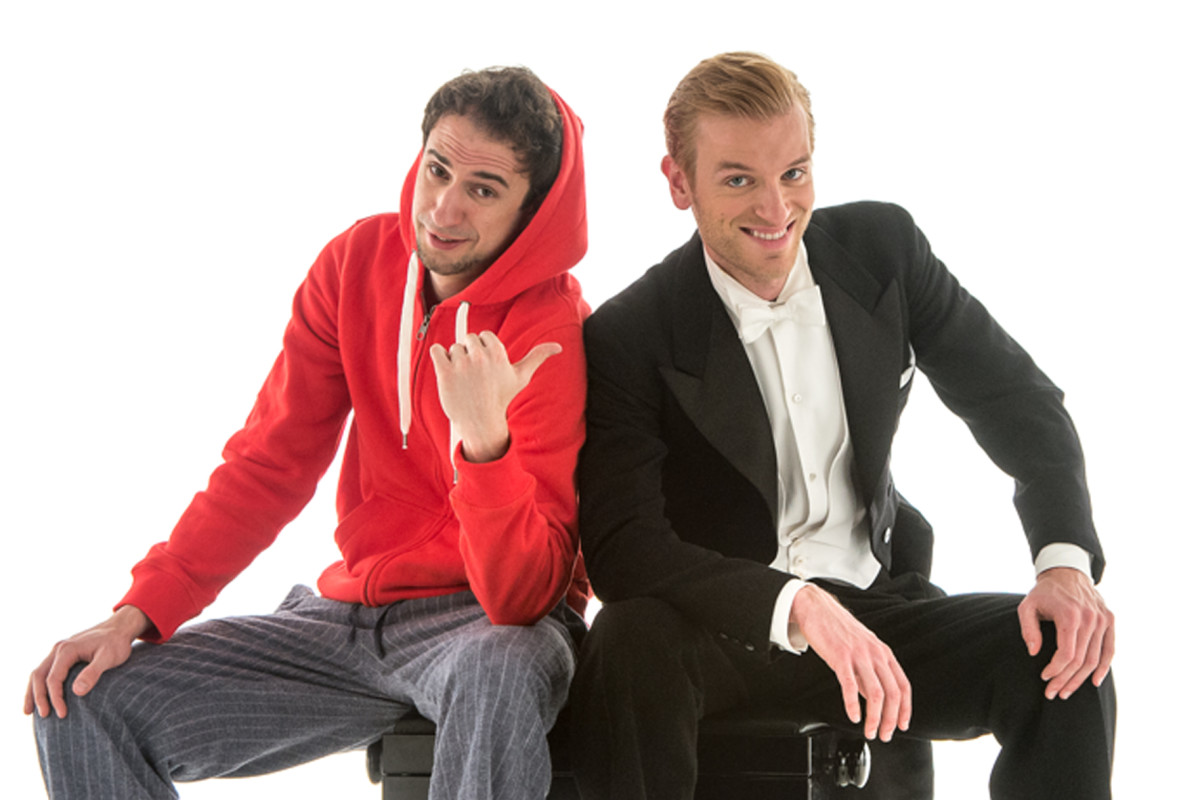 Till that glorious Offenbach day arrives, you can enjoy the “Werkschau” at Bar jeder Vernunft and see for yourself the great tradition of a musical comedy team: alive and kicking, literally. It’s inspiring.