Ralph Benatzky’s “Musikalisches Lustspiel” Bezauberndes Fräulein (1933) is a true delight. As anyone knows who has ever heard the wonderful modern recording on Preiser Records starring Uwe Kröger and Gabriela Bohne from Vienna, 2002. Or the less opulent but very cheeky chamber version on Duophon Records from the Komödie am Kurfürstendamm, Berlin; also 2002. Now this musical comedy is returning to the stage in Switzerland, Burgäschi. 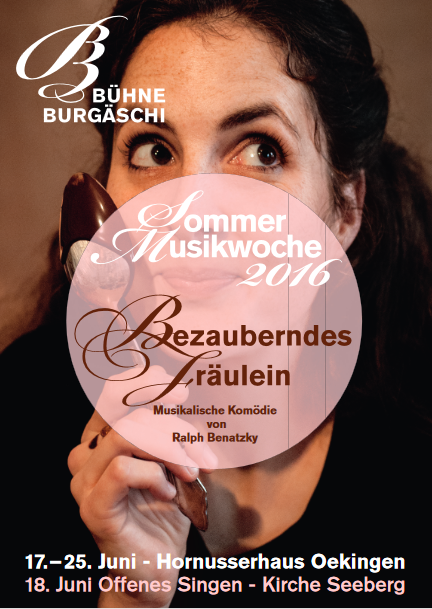 Poster for the Swiss production of “Bezauberndes Fräulein.”

The so called “Hornusserhaus Oekingen“ near Solothurn will present the Benatzky show as a summer treat: open air, with a view of the Jura mountains. With a young cast that includes Stefanie Frei in the title role, and Roger Bucher as her amorous opponent Paul. The staging is by Melanie Gehrig, Reimar Walthert conducts.

There are eight performances that anyone in the neighborhood should not miss. (It remains to be seen if this jazzy spectacle will ever find its way back to a Berlin stage, where it truly belongs.) Here is the plot outline:

Paul’s weekend house: Slightly overstretched painter Felix and his favourite model Rosette are visiting the weekend house of their friend Paul, a high-ranking civil servant. They want to retire to sleep immediately after their last hand of bridge, but Paul is full of anticipation for the coming day. For the first time, his boss has indicated he will visit on Sunday, as he now knows that his daughter Louise has secretly become engaged to Paul. Louise’s visit is also anticipated.

Felix and Rosette know Louise and find her rather boring, and also nothing special to look at. They therefore contemplate how to break off Paul’s engagement to Louise. In the middle of the night, a solution presents itself: the doorbell rings. Felix opens the door and is overcome by the beautiful form of the young lady standing in front of him. She has a flat tyre and is requesting help. While Paul reacts unhelpfully, Felix accompanies the “charming lady” to her car and acts as if to help. She is not interested and converses with her chauffeur, so he slashes the tyre and makes the flat tyre worse. Now it is obvious that Annette, for such is the name of the young lady, must be offered a bed for the night in Paul’s house. The chauffeur sets out with Paul’s housekeeper Julie on foot, to inform Annette’s father what has happened. All others go to bed.

A new day has started. Paul does everything he can to get rid of Annette, but the more he talks to her, the more attracted she seems to become to him. She wants to wait in peace until she is picked up by her father, the prosperous “Chocolate King”. When the doorbell rings, Paul hopes she will immediately be gone; instead of Annette’s father, Paul’s boss and his daughter Louise enter the house. They are both outraged to find an unknown woman there in an negligee, and leave the house within minutes. Paul is totally bemused, while Felix is quite satisfied with proceedings. This doesn’t last, as the “Chocolate King” enters, but not alone, rather with Annette’s fiancé Hektor in tow. Annette awaits accusations and blame, but Hektor appears quite relaxed — no word of reproach passes his lips. Now Annette is angry; she can’t stand Hektor’s passivity and ends the engagement on the spot. Felix’s plan appears to be working.

Office in the Ministry: Felix has arranged for Annette to visit Paul during his lunch break in his office. Paul, shy to a fault, doesn’t know how to deal with the situation. Annette kisses Paul just as Paul’s boss enters the room. The boss is furious, having depended on Paul as a right-hand man for many years and hoping to welcome him as a son-in-law. Paul realises that Felix is behind the situation. While just a moment before, he wasn’t sure whether he should perhaps court Annette, now it is clear: Annette must be removed from his life.

By a river: While entertaining thoughts of the “charming lady”, Paul is also beset by an urge to throw himself into the river and end his life. Suddenly he notices a woman in a simple dress, the uniform of the Salvation Army, approaching him. As she nears him, he realises it is Annette. His heart beats wildly. Annette offers that for him, she would sacrifice all her riches. Paul abandons his morose thoughts and takes her in his arms. Two men are watching, concealed: the “chocolate king” and Felix; they have successfully pulled the necessary strings to reach the happy ending.