It’s not unusual for Barrie Kosky to stage something outside of Komische Oper, but usually he doesn’t do it in Berlin. And it’s not unusual for him to focus on shows from the Weimar Republic, yet those are generally forgotten works by Paul Abraham or Oscar Straus. With Dreigroschenoper at Berliner Ensemble things are different, because it’s hardly a forgotten work. Instead of bringing it to the operetta Eldorado in Behrenstraße, the BE is bringing some of the operetta heroes from there to the place where Threepenny Opera premiered in 1928 – in the shadow of much greater hits by Franz Lehár and Ralph Benatzky.

The new production that opened this week in Berlin replaces the popular Robert Wilson staging from 2007 and presents Bertolt Brecht’s cynical criticism of capitalism as something akin to Chicago’s Cellblock Tango, but without the Bob Fosse choreography. Everything plays out on a bare stage with a giant scaffold which everyone climbs around in. It’s prison and playground at the same time, it can be read as a metaphor for life. It is certainly perfect for a production that wants to travel, a lot. (Set design: Rebecca Ringst; costumes by Dinah Ehm.) 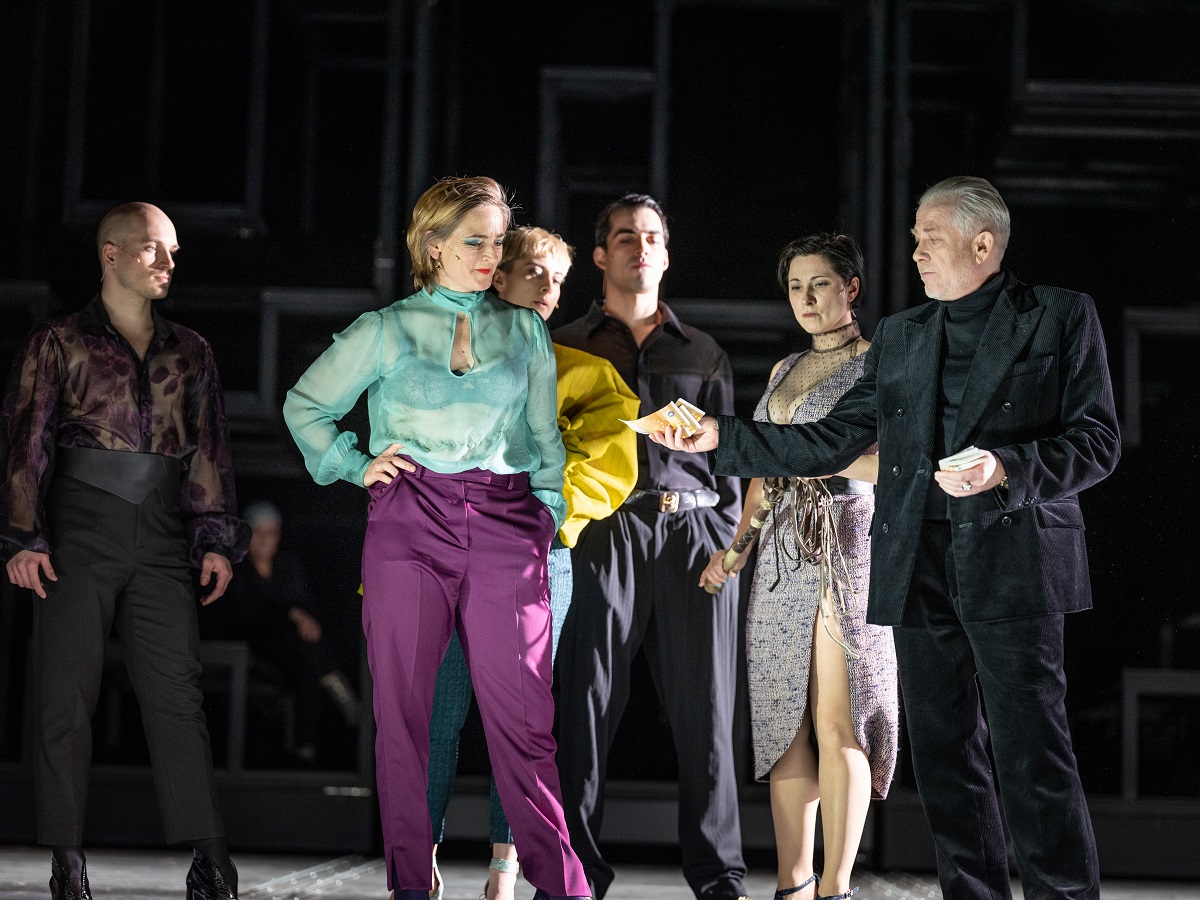 The singers Mr. Kosky has at his disposal here are not the usual stars from Komische Oper, but the ensemble from Berliner Ensemble. They deliver their lines – perfectly guided by musical director Adam Benzwi at the piano – with a different style, and it’s refreshing to see how that works: Nico Holonics is a baby-faced Mack the Knife, Cynthia Micas an almost pop-star Polly Peachum. A cross-dressed Kathrin Wehlisch as Tiger-Brown brings a hint of homoeroticism to the relationship between Brown and Mackie, and Micas a touch of lesbian bonding to her relationship with rival Lucy Brown (sung hilariously by Laura Balzer).

Like a re-incarnation of Frau Luna, Josefin Platt comes down as the “Moon over Soho” behind a glittering curtain, singing the famous “Moritat” as if she were sleepwalking, while Constanze Becker as Mrs. Peachum is a total knockout, not just when she sings the “Ballade von der sexuellen Hörigkeit” wrapped in a fur coat.

It would be more than interesting to see any one of these actors at Komische Oper in the future, if such cross-casting were possible. (And that includes Bettina Hoppe as Jenny and Tilo Nest as Mr. Peachum.) 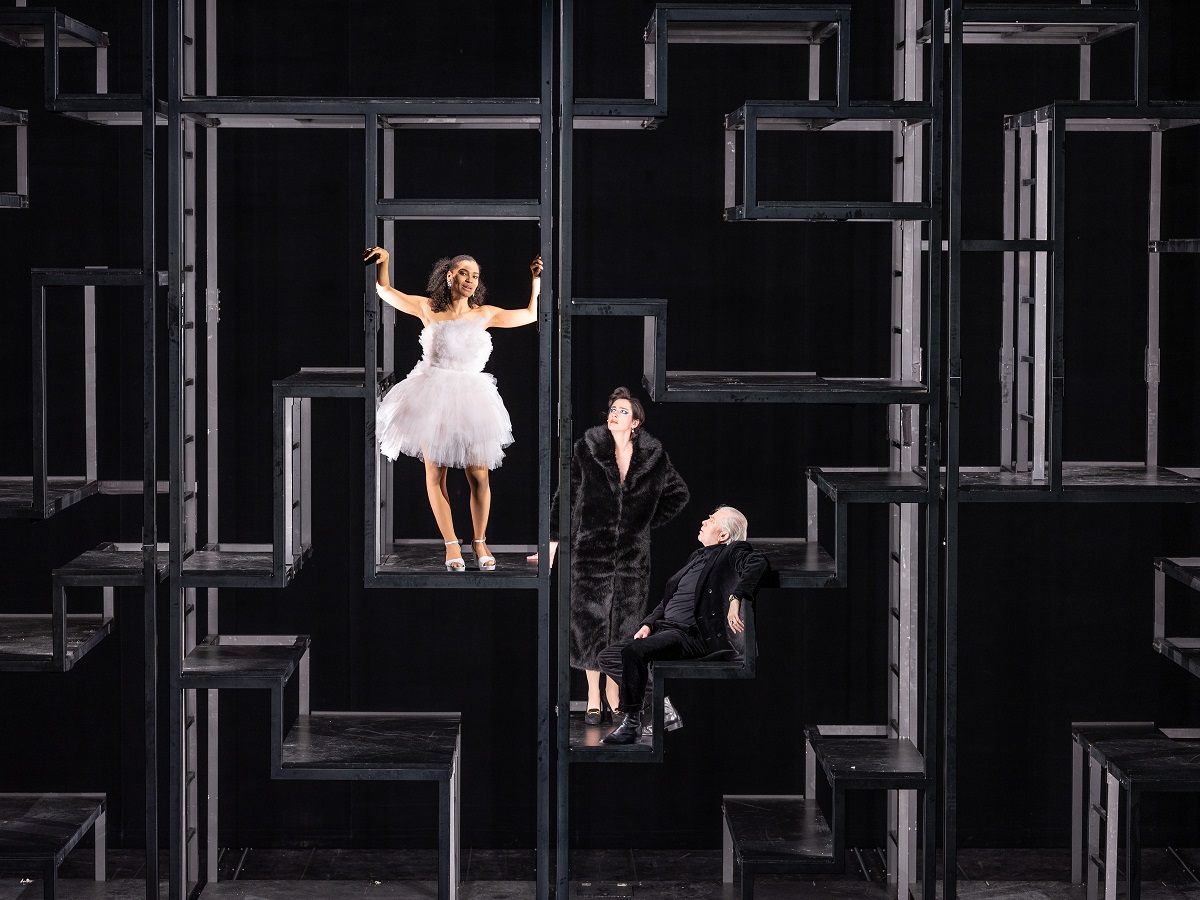 What’s also interesting is the “chorus” which is pure luxury casting: Julie Wolff, Nicky Wuchinger, Teresa Scherhag, Nico Went, Denis Riffel, Tobias Bieri, Dennis Jankowiak, and Julia Berger. Only four of them are on stage in a single performance, but all of them are totally overqualified for their roles. I can only hope that Barrie Kosky got to know them during the extended rehearsal period and brings them to Behrenstraße, too. Because – as you will recall – Nicky Wuchinger is one of the greatest operetta joys I’ve ever seen (in Vetter aus Dingsda). And the same goes for almost everyone else in that list. If there were to be an emergency, they could each and everyone step into any of the lead roles. And that’s saying a lot! 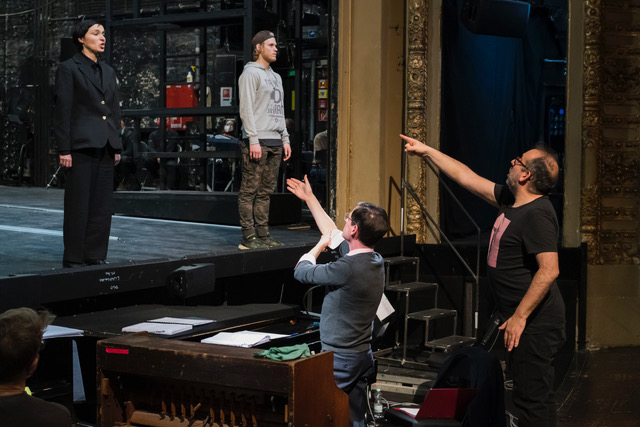 For me, the greatest revelation was the way Adam Benzwi got the singers to perform this music – with utmost casualness and linguistic detail. The words matter here, and there is so much nuance, that it feels like hearing these überfamous numbers for the first time more than once. He also allows everyone to change tempo at will, which makes the music breathe, and he really roughens things up with the band (James Scannel, Doris Decker, Otwin Zipp, Stephan Genze, Ralf Templin, Vít Polák) to make this Kurt Weill sound “raw” and exciting, not slick and overfamiliar. (Read an exclusive interview with Mr. Benzwi on his approach to the music here.)

Many iconic lines from the libretto have been cut, it’s not exactly clear to me why. (Dramaturgie: Sibylle Baschung.) But Dreigroschenoper works, even in an abridged version. It also works in such a minimalistic staging. The only thing that could work a little better is Mackie Messer, because Nico Holonics (who is really brilliant) somehow lacks that seductive quality that makes it understandable why all the ladies fall for him, he also lacks that horrendous narcissism that eventually makes them all turn against him. If Nicky Wuchinger is an understudy, I definitely want to see this production again when he steps in. 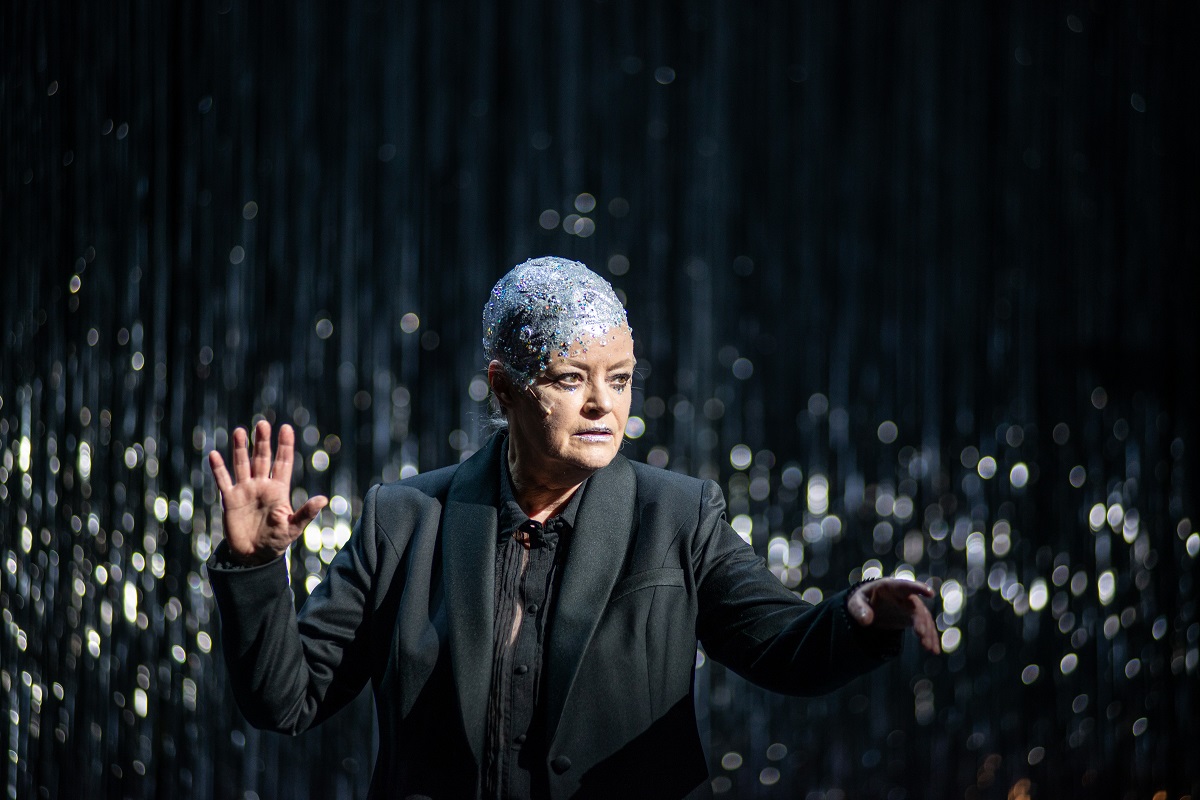 Josefin Platt as the Moon over Soho in “Dreigroschenoper.” (Photo: JR Berliner Ensemble)

The first reviews were enthusiastic, reporting only of minimal booing on opening night. When I saw the first preview, everyone left and right from me was in a super good mood that this long delayed production finally happened at all, and that it opens the new season in Berlin.

In October 2021, Komische Oper presents Aufstieg und Fall der Stadt Mahagonny, also in a Kosky production. But with no one from this Dreigroschen team, and without Adam Benwzi (instead Ainārs Rubiķis conducts). It will make for interesting comparisons.

For more information on the new Dreigroschenoper production and performance dates, click here.