Recently, ORCA received a generous donation in the form of various Gilbert & Sullivan materials that a researcher in the USA wanted to get rid of. Among the goodies was an LP of Hot Mikado and a CD of Pinafore! Both are interesting examples of what you can do with an operetta if you plan to give it a facelift. And both recordings pose the question: how far should you go in bringing a 19th century operetta into the new Millennium, and is an update from 1975 still interesting in 2015? 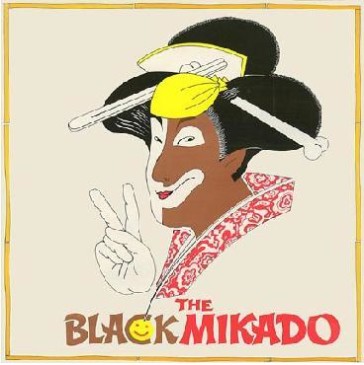 Theater goers in the German speaking world are familiar with the common phenomenon that all shows are relocated in terms of time: hardly an opera or operetta that’s left in the original historic setting, described in the libretto. Usually, the explanation for this is that audiences today are too stupid to understand the relevance to our current situation if they see a historic plot unfolding in its proper historic context. So, generally speaking, the action is moved forward, under the assumption that a Roaring Twenties or Sixties setting is somehow closer to us. (While at the same time no one has a problem with historic stories in movies or TV shows, whose metaphorical relevance for us today is understood by a vastly larger audience without any problems: be it Gladiator, Marie Antoinette or The Lord of the Rings.) In many cases, such updates do not coincide with a re-write of the libretto and music, which leads to many bizarre discrepancies and absurdities. And often to a massive loss of audience attendance. 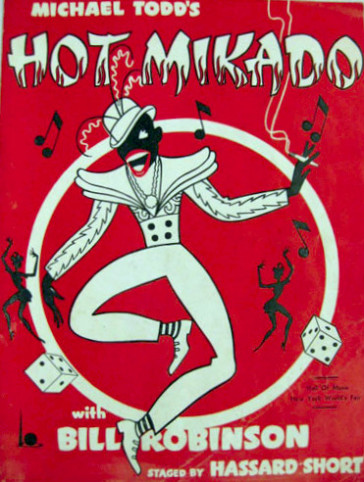 The sheet music cover for the 1939 “Hot Mikado” in New York.

This used to be different, of course. Originally, operettas were regularly adapted to suit different local tastes and conventions. Later, the music was often updated too; after all, operetta was all about pop culture and current tastes. So Erik Charell jazzed up The Mikado for the Große Schauspielhaus Berlin in the 1920s, and New York got a Black version of this G&S classic in the 1930s and 40s, with the music re-imagined in a Harlem jazz style. Both versions were highly successful. Much later, in 1975, came another new Hot Mikado, again set on a Caribbean island. This time, Sullivan’s score was turned into a mixture of rock, reggae, blues and calypso by Eddie Quansah, George Larnyoh, and Janos Bajtala. Listening to the pop singing and arrangements on the LP is a real pleasure. Most of all, because this is not just another Mikado, sounding like all the others. No, this is different and unique. It doesn’t matter whether you like the style, but you are not going to mistake it for another run-of-the-mill version. It is an individual artistic statement, which is something we have mostly come to forget in the world of operetta.

There are some spectacular vocals to be admired, too. British-Nigerian singer Patricia Ebigwei’s Yum-Yum and her solo “The Sun Whose Rays” are nothing short of lovely. And the Katisha of Anita Tucker is a very different kind of “monster” than you are accustomed to. She, too, is a joy to hear.

The show premiered on 24 April 1975 at the Cambridge Theatre in London, where it ran for 472 performances before going on a national tour. A 1976 production was mounted in Soweto, South Africa. Theater directors such as Barrie Kosky, looking for jazz operettas, could use this 1975 version of Mikado just as well as the Charell version. Because, in their own way, both are historic documents. And in the absence of the Charell performance material, this version with a Titipu Town Band might be an interesting alternative option. It’s definitely a recording worth knowing, for the sheer fun of it. 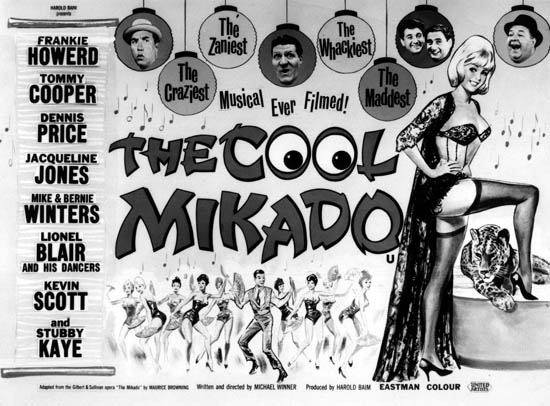 Yet another version: poster for the 1962 “The Cool Mikado,” a British musical film directed by Michael Winner.

Talking of fun: the CD of Pinafore! mentioned above is a 2001 update by Mark Savage. He curated a reading series called “Queering the Classics,” which in 2001 spawned this gay adaptation of HMS Pinafore. It won Best Musical at the LA Weekly Theatre Awards and Best Production at the 2003 New York International Fringe Festival. The story of sailors and navy officers is changed as follows, according to Playbill.com: “Don’t ask, don’t tell? Not in the Navy envisioned by Los Angeles’ Celebration Theatre […]. Entitled Pinafore!, the updated operetta owes its new book and look to director Mark Savage. Things have changed in the Navy since Gilbert and Sullivan crafted the score’s classics ‘A Maiden Fair to See’ and ‘He Is an Englishman.’ Now, there’s a separate-but-equal gay crew with Senator Barney Crank as Admiral in charge. While docked at Palm Springs, the new recruits arrive, among them self-proclaimed ‘heterosexual gay sailor’ Dick Dockstrop, who immediately falls in love with the Captain’s daughter. Only she’s not quite what ‘she’ seems.” 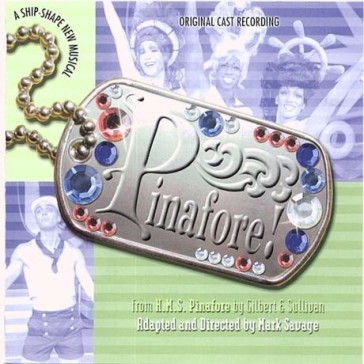 The original cast album of “Pinafore!”

The Savage Pinafore! is a hilarious gender bending romp. With some very clever new lyrics. Sadly, on the original cast album, the musical enjoyment is sabotaged by inadequate vocals – and by cheesy electric piano accompaniments. Yes, that’s a question of budget. And this was a low budget production. (Unlike the Hot Mikado.) If you are able to ignore the arrangements, there are so many fun moments in this re-imagined Pinafore! that you will wonder why it has not been staged elsewhere? Is it too “queer” for traditional Savoyards? Is it too radical for mainstream operetta goers?

To come back to the Komische Oper: they scored major successes with a very “gay” Kiss Me, Kate (returning to the Berlin stage in January 2016, with Peter Bording and Dagmar Manzel), and with a super “queer” version of Clivia in drag. Here would be a version of an operetta that is actually meant to be “gay” and “queer” from start to finish. No extra Regietheater update needed. The whole cross-dressing business of the captain’s daughter has since 2001 only gained more political relevance; it would deserve a revival in our current times of trans* politics and gender fluid ideals.

And if someone will stage this adaption anew, please don’t forget to give us a new and improved recording. Mark Savage and all LGBTI interested Savoyards deserve one!

Needless to say, the LP cover of Hot Mikado, showing a black-face actor doing yellow-face should be a perfect starting point for a discussion on political correctness in the context of operetta: after all, a Mikado performance in New York was recently cancelled because of accusations of white Anglo-Saxons playing Asians, which many Asians found insulting. What happens, if black actors do it: is that a double no-no, or the perfect topsy turvey needed for a real G&S experience?